In contrast to external high energy photon or proton therapy, targeted radionuclide therapy (TRNT) is a systemic cancer treatment allowing targeted irradiation of a primary tumor and all its metastases, resulting in less collateral damage to normal tissues. The α-emitting radionuclide bismuth-213 (213Bi) has interesting properties and can be considered as a magic bullet for TRNT.

In the diagnosis, monitoring, and treatment of cancer patients, nuclear medicine plays an important role. Radiopharmaceuticals consist generally out of three functional elements: (1) a vector molecule (or carrier) that shows high selectivity and affinity for a target; (2) a radionuclide; and (3) a linker or chelator to attach the former to the latter (Figure 1) [1][2][3][4]. A fundamental and critical component of a radiometal-based radiopharmaceutical is the chelator, the ligand that binds the radiometal ion in a stable coordination complex so that it can be properly directed to its molecular target in vivo [5][6][7]. The radiopharmaceutical is mostly distributed within the body by the vascular system and allows targeting of a primary tumor and all its metastases. The specific decay characteristics of the radionuclide attached to the vector molecule determine if the radiopharmaceutical can be used for diagnostic (molecular imaging) or therapeutic (TRNT, targeted radionuclide therapy) purposes. The goal of targeted radionuclide therapy is to deliver sufficiently high doses of ionizing radiation to specific disease sites for cure, disease control, or symptomatic (e.g., pain of hormonal secretion) palliation. The biological effect of radionuclide therapy is obtained by three mechanisms: (1) Interaction of ionizing radiation with water in which chemically active free radicals (reactive oxygen species, ROS) are formed that can react with biomolecules (phospholipids, proteins, RNA, DNA, etc.), thereby irreversibly damaging the cells. (2) Direct interaction of ionizing radiation with DNA in which single-strand (SSB), double-strand (DSB), or cluster breaks can occur. (3) During treatment, a phenomenon called the abscopal effect can occur when radiation reduces not only the targeted tumor but also leads to the shrinkage of untreated tumors elsewhere in the body. Though the exact biological mechanisms accountable for the abscopal effect are yet to be identified, the immune system is considered the major player in this significant role [1][8]. 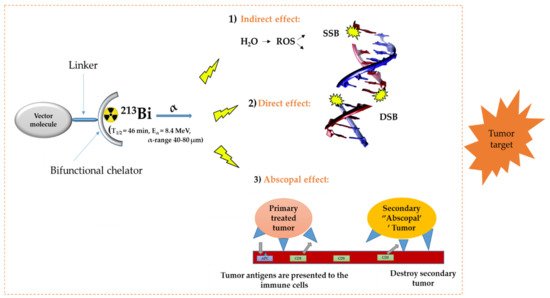 Auger-, beta minus (β–-), and alpha (α-) emitters are the three main subgroups of therapeutic radionuclides. α-decay is a radioactive decay in which an α-particle, consisting of two protons and two neutrons, is emitted from the nucleus. Tumor cells can be selectively destroyed, and the healthy tissue is minimally damaged due to the short penetration depth of α-particles (40–80 µm, corresponding to 2–10 cell diameter). An α-particle is characterized by a high-energy linear transfer (LET, 100 kEV/µm) and thus a high relative biological effect (RBE). The high LET of α-particles results in a high rate of double-strand and cluster DNA breaks and consequently irreparable damage, producing the high kill rate of α-emitting radioisotopes both in normoxic as well as in a hypoxic tumor cell environment, which is known to be more resistant to photon and electron-based irradiation [10]. Therefore, targeted alpha therapy (TAT) can be considered as promising cancer treatment, especially suitable for the treatment of tumors with small diameters and which have a spatially homogeneous expression of the molecule targeted by the vector. Sufficient expression of the target in the malignant tissue must be confirmed before TAT can be initiated. This can be done by first performing a positron emission tomography (PET) or single photon emission computed tomography (SPECT) scan, after injection of the diagnostic sister of the therapeutic radiopharmaceutical. If the diagnostic radiopharmaceutical can truthfully predict the pharmacokinetics of its therapeutic sister, the diagnostic scan also allows accurate calculation of the dosimetry. This class of radiopharmaceuticals are called theranostic agents [11].

It is also important to mention here that the theranostic approach could also involve a single radionuclide agent—this theory stipulates the use of a single radionuclide, producing both therapeutic radiation and a low-energy γ-ray for SPECT to deliver dosimetric data. Examples of some of these radionuclides are 47Sc (T½ = 3.35 d) and 67Cu (T½ = 2.58 d) [12].

The α-emitting radionuclide 213Bi (T1/2 = 45.6 min, Eα = 8.4 MeV, γ = 440 keV, α-particle range = 40–80 µm) has interesting properties and might be considered as a magic bullet for TRNT [5][9]. However, like every cancer treatment modality, 213Bi-based TAT has advantages and disadvantages. Indeed, 213Bi can be considered as powerful precision ammunition, but it needs to be handled with care. In function of the target, the most suited vector molecule needs to be selected and the biological half-life of the vector should be compatible with the 45.6 min physical half-life of 213Bi, which is substantially shorter than any therapeutic radionuclide in current routine clinical use. Further, an appropriate chelator needs to be carefully chosen to match the physical properties of 213Bi.

2. Radionuclide Properties and Production of 225Ac and Its Daughter 213Bi 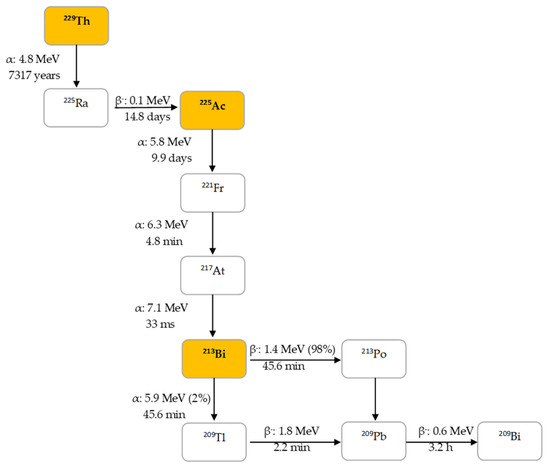 In human tissue, the α-particle released by 213Po (Eα = 8.375 MeV) has a path length of 85 µm. It is this radionuclide that produces >98% of the α-particle energy released per disintegration of 213Bi and could be considered as the radionuclide that provides 213Bi cytotoxicity. The bulk of the total particle energy released per disintegration of 213Bi comes from α-decay, accounting for 92.7%, while 7.3% comes from β-particle emission, which includes the decay of 209Pb [14]. The decay of 213Bi is followed by the emission of a 435 keV-photon (98% abundance) that could potentially be used for SPECT with a gamma camera equipped with high energy collimators, permitting detailed evaluation of the biodistribution of 213Bi in vivo [15].

It is noteworthy to mention that high activity 225Ac/213Bi generators are required to allow production of clinical amounts of 213Bi. Optimal clinical injected activities depend on the vector molecules; for prostate-specific membrane antigen (PSMA)-targeting radiopharmaceuticals, this has been determined to be 4–8 MBq of 225Ac [16][17]. In contrast, to have the same number of alpha-particles emitted, 5–10 GBq is needed for 213Bi-labeled radiopharmaceuticals [18]. This was estimated based on the Equations (1) and (2) below and the fact that 225Ac delivers four α particles in its total decay scheme, while 213Bi delivers net only one α particle. However, this is a rough estimation that does not consider the biological clearance of the radioprobes. Definitely, the much shorter half-life of 213Bi compared to the half-life of 225Ac is the key reason for the high activity levels that are needed when using 213Bi for targeted radionuclide therapy (Equation (2)).

Several approaches for 225Ac and 213Bi production have been recently reviewed and discussed in detail (Figure 3) [7][13]. The most utilized strategy is the radiochemical extraction of 225Ac from 229Th (T1/2 = 7317 years) sources originating from the decay of fissile 233U. This results in “carrier free” 225Ac using the generator method, but the available 233U stocks and thus 229Th stocks are limited because 233U management is restricted by the requirements concerning non-proliferation of fissile materials. Most of the 213Bi and 225Ac used in clinical tests and research activities worldwide has so far been produced by this approach [19]. Two examples of 229Th sources that can produce clinically relevant activities of 225Ac are (1) the US Department of Energy, Oak Ridge National Laboratory (ORNL) in Oak Ridge, TN, United States of America and (2) the Directorate for Nuclear Safety and Security of the JRC of the European Commission in Karlsruhe, Germany. Additionally, at the Belgian Nuclear Research Centre (SCK CEN) in Mol, Belgium, very pure sources of 229Th were identified, processed, and used for pre-clinical studies [20]. The total global annual 225Ac production volume is approximately 55–65 GBq [21] and cannot meet the growing demand for 225Ac, but interestingly, it has been reported that stocks will increase by extraction of additional 229Th from US legacy wastes [7]. 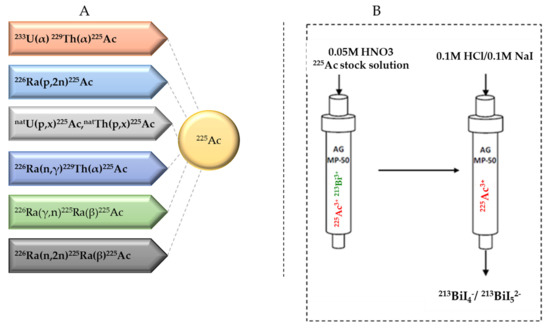 Cyclotron production is an alternative method for 225Ac production. Medium-energy proton irradiation of 226Ra using the reaction 226Ra(p,2n)225Ac is considered to be a viable approach. The advantage of this method is the widespread availability of appropriate cyclotrons worldwide, especially in Europe [22][23], and high amounts of clinical doses of 225Ac could be produced in a reliable way. It is important to mention that medical cyclotrons used to produce radioisotopes (15–25 MeV) are considered to be feasible for basic and applied research [24]. The downside with this approach is that 226Ra is not an easy isotope to work with due to the presence of the highly radiotoxic noble gas 222Rn in its decay chain. Therefore, it is unlikely that this will ever enter a clinical cyclotron.

Further, high-energy proton irradiation (0.6–2 GeV) of uranium and thorium spallation targets via the reaction natU(p,x)225Ac is another approach for the production of 225Ac. The existence of several suitable high-energy proton facilities makes this an achievable prospect. However, such accelerator-produced 225Ac contains a low percentage (0.1–0.3%) 227Ac (T1/2 = 21.77y) at the end of bombardment, which might be a serious limitation in terms of clinical translation and waste management [25][26]. Nevertheless, 225Ac obtained through high-energy accelerators could be entirely appropriate for 225Ac/213Bi generator production (see 2.3), even with co-production of 227Ac, as all actinium species will be retained on the generator.

Another production path being explored is transmutation of 226Ra to 229Th by an intense neutron flux. This will lead to three successive neutron capture reactions: 226Ra(n,γ)227Ra, 227Ac(n,γ)228Ac, and 228Th(n,γ)229Th. However, production of many orders of magnitude of 228Th (T1/2 = 1.9 y) intermediate, and handling of the radium target remains a challenge [18].

226Ra(γ,n)225Ra is another reaction path for 225Ac production that has been determined experimentally [27][28]. This strategy explored irradiation of old radium needles with high-energy X-rays from electron linear accelerators (linacs).

Finally, transmutation of 226Ra to 225Ra by fast neutrons via the reaction 226Ra(n,2n)225Ra is also under consideration. It is noteworthy to point out that the limitation for all the strategies discussed is the handling of the radium targets. However, earlier results with these methods have been promising [22].

To conclude, all clinical studies with 225Ac/213Bi radiopharmaceuticals were performed to date with 225Ac originating from 229Th stocks, but other accelerator-based production routes were heavily investigated in the last decade. This progress will hopefully assure reliable production and delivery of 225Ac to radiopharmacy institutes in the near future, allowing more preclinical research and multicenter clinical trials with both 225Ac and 213Bi-radiopharmaceuticals.

225Ac can be loaded on 225Ac/213Bi generators to deliver 213Bi on site, but it can also be used directly as a therapeutic radionuclide. 225Ac/213Bi generators are well explored and discussed [29][30][31]. The most established strategy is based on the direct generator method, in which the parent 225Ac in acidic solution (e.g., 0.05M HNO3) is strongly retained by the sorbent (e.g., AG MP-50 cation exchange resin) and 213Bi is eluted. Elution is performed generally with a mixture of 0.1M HCl/0.1M NaI to obtain 213Bi in the form of 213BiI4- and 213BiI52- that can be directly used for radiochemistry purposes. (Figure 3) [7]. These generators can potentially be used clinically due to the relatively long parent half-life, which allows shipment of the generator to radiopharmacy facilities at long distance. Additionally, the transient equilibrium of the 225Ac-213Bi permits elution at approximately every 3 h [32]. These generators can provide weeks of reliable in-house generation of 213Bi for radiolabeling purposes [33]. High activity (up to 4 GBq 225Ac) generator systems, developed at JRC Karlsruhe, have been reported with yields of 213Bi elution exceeding 80% and low breakthrough of 225Ac of less than 0.2 ppm [32].