(1,3;1,4)-β-D-Glucans, also named as mixed-linkage glucans, are unbranched non-cellulosic polysaccharides containing both (1,3)- and (1,4)-β-linkages. The linkage ratio varies depending upon species origin and has a significant impact on the physicochemical properties of the (1,3;1,4)-β-D-glucans.

β-Glucans have been found to be highly abundant in plants, algae, fungi, and bacteria as one of the fundamental fibers in the cell walls. The polysaccharides are composed of D-glucopyranosyl units (Glcp) as building blocks. Depending on the glycosidic bonds between the glucose monomers, β-glucans can be classified into two sub-groups, cereal, and non-cereal β-glucans. For example, the yeast and fungi β-glucans contain mainly 1,3 and branching 1,6 linkages, whereas cereal β-glucans have linear glucan chains composed of 1,3 and 1,4 glycosidic linkages. (1,3;1,4)-β-D-Glucans, or mixed-linkage glucans (MLGs), have been found rich in rice, wheat, cereal grains, and oats, serving as important dietary fibers for our daily consumption, and also impact our metabolic activities by decreasing cholesterol and blood glucose [1].

Structurally, the (1,3;1,4)-β-D-glucan is a linear polymer, primarily containing (1,4)-linked β-D-glucose residues interspersed with a single (1,3)-β-linkage. The ratio of (1,3)- to (1,4)-β-linkages is a good indicator of the fine structure of (1,3;1,4)-β-D-glucan and determines its solubility and physicochemical properties [2]. The polysaccharide can be broken down by the specific polysaccharide hydrolase, the lichenase (EC 3.2.1.73), which cleaves at a (1,4)-β-d-glucopyranosyl linkage immediately adjacent to a (1,3)-β-D-glucopyranosyl residue, yielding oligosaccharides with distinctive structures such as the cellotriose Glcp-β-1,4-Glcp-β-1,3-Glcp (G4G4G3GR, with a degree of polymerization of three, namely DP3) and cellotetraose Glcp-β-1,4-Glcp-β-1,4-Glcp-β-1,3-Glcp (G4G4G4G3GR, DP4) (Figure 1) [3]. Since this discovery, the lichenase has been essential in the structural profiling of (1,3;1,4)-β-D-glucans. For example, the enzymatic digestion of (1,3;1,4)-β-D-glucans of cereal and grasses (family Poaceae), such as barley, results in a higher proportion of DP3 compared to DP4, with a ratio of 1.5–4.5 [4][5][6], whereas the (1,3;1,4)-β-D-glucans of horsetail (Equisetum spp.) of a monilophyte family Equisetaceae sensu stricto releases predominantly DP4 after lichenase digestion (Figure 1 and Table 1) [3][7][8]. The structure of (1,3;1,4)-β-d-glucans of the brown algae Ectocarpus sp. has been recently reported to have only DP3 repeating units (Table 1) [9]. In contrast, Glcp-β-1,3-Glcp (DP2) and DP3 are the most abundant oligomers in (1,3;1,4)-β-D-glucans from Sinorhizobium meliloti and Sarcina ventriculi, respectively [3][10]. Structural surveys reveal (1,3;1,4)-β-D-glucans display heterogeneous structures between different taxonomic groups (Table 1), which suggests differential functions in the cell walls of the different organisms. 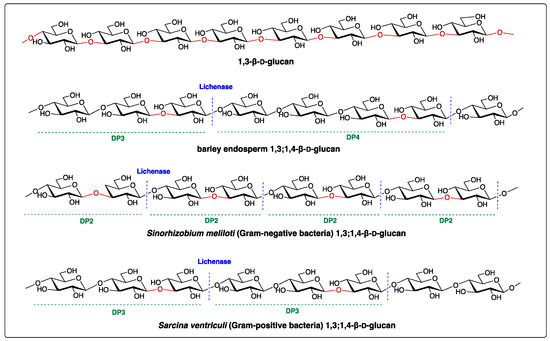 (1,3;1,4)-β-d-Glucans have been widely accepted as functional and bioactive ingredients in dietary fibers [14]. The polysaccharides are known to enhance the viscosity of the solution and form a matrix-like gel under suitable conditions [14][15][16]. Hence, (1,3;1,4)-β-D-glucans have been utilized in the industry as thickening agents for gravies, ice cream formulations, etc. [17], or as fat mimetics in low-calorie food [18]. Additionally, (1,3;1,4)-β-D-glucans extracted from human dietary fiber have been identified that can lower serum cholesterol, reduce the risk of type II diabetes and obesity, and provide other healthful benefits [19][20][21][22], sometimes they can also function as a source of metabolizable energy [23]. It is also observed that some bacteria contain MLG utilization loci (MLGULs), encoding genes that allow the bacteria to utilize MLGs as energy sources. Therefore, the MLGULs can serve as genetic markers for (1,3;1,4)-β-D-glucan catabolism in commensal gut bacteria [24].

By enzymatic profiling and linkage analysis, the ratio of (1,4)- to (1,3)-β-linkages is defined within the range of 2.2–2.6:1 in (1,3;1,4)-β-D-glucans of cereals, and this translates to a ratio of DP3:DP4 units ranges from approximately 1.5:1 to 4.5:1, with the occasional occurrence of longer oligosaccharide units of up to DP > 13 [6][27][28]. So far, similar oligomeric distributions have been found within related species, which indicates that the (1,3)- and (1,4)-β-linkages are not randomly generated. On the other hand, whether the differences in ordered combinations of DP3 and DP4 constitutive blocks are species-dependent is yet to be solved. Among vascular plants, Equisetum species, also known as horsetails, are reported to have (1,3;1,4)-β-D-glucans in their cell walls with significantly lower DP3:DP4 ratio (0.05–0.1:1). A higher abundance of the DP4 repeat units may facilitate stronger interaction with the cellulosic microfibrils [3][7].

(1,3;1,4)-β-D-Glucans are found in the walls of red algae and brown algae, and both are evolutionarily more distant to land plants. A sulfated (1,3;1,4)-β-D-glucan has been isolated from the red algae Kappaphycus alvarezii. This sulfated glucan has only 180 residues, with 64% sulfation on the (1,4)-β-linkages only, and the remaining (1,4)-β-linkages were sparse and unlikely to be in long sequences after one and another. The sulfated (1,4)-β-linkages likely link to the fibrillar cell wall polymers by their incompatible extraction behavior. It is also speculated that the sulfation helps control the construction and positioning of cellulose [31].

Lichens are a combination of fungi and algae or cyanobacteria living in symbiosis, where fungi are recognized as the mycobiont and different algae or cyanobacteria as the photobiont in lichens. (1,3;1,4)-β-D-Glucans have been found in abundance in Parmeliaceae lichens, such as Cetraria, Evernia, Newropogon, Parmelia, Parmotrema, Rimelia, and Usnea [34]. These (1,3;1,4)-β-D-glucans isolated from lichen species from the family Parmeliaceae are also known as lichenin or lichenan. Specifically, the (1,3;1,4)-β-D-glucans extracted from the mycobiont cell wall of Cetraria islandica (Iceland moss) gave a higher ratio of DP3 to DP4 (20.2–24.6:1) compared barley and oats (1,3;1,4)-β-D-glucan (1.8–3.5:1) [35]. However, the ratio of (1,4)- to (1,3)-β-linkages in lichenin varies significantly among the lichens, ranging from 2.3:1 found in C. islandica, to 0.3:1 in oak moss Evernia prunastri [35]. The high proportion of three-linked Glcp in E. prunastri glucans raised the question of whether both linkages came from two separate glucans.

Besides the lichens, a non-lichen fungus, Aspergillus fumigatus, was found to have (1,3;1,4)-β-D-glucans in an alkali-insoluble fraction from its cell wall, which is suggested to be related to fungal cell wall rigidity [36]. The (1,3;1,4)-β-D-glucan was also detected in the cell wall of Neurospora crassa with monoclonal antibody [37]. A high percentage of (1,4)-linked glucose was reported in the glycosyl composition and linkage analysis of fungal cell wall from a filamentous fungus N. crassa [38]. It is highly likely that the occurrence of (1,3;1,4)-β-D-glucans are not restricted in the A. fumigatus and N. crassa. How the particular variation in the structures of (1,3;1,4)-β-D-glucans found may be related to their function is largely unknown. Other β-glucans, for example, the (1,3;1,6)-β-D-glucan, is common β-glucan found in the cell walls of fungal species and has shown to possess immunomodulatory activities in reducing SARS-CoV-2-induced cytokine storm in the infected patients [39]. A further β-glucan structural survey of taxa in other lichen and fungal families would be interesting to provide evidence in understanding structure-function relationships between β-glucan structures and their functions, and their potential implications for pharmaceutical research and development.

The bacteria cell wall is a complex multilayered structure that protects the bacteria from an unpredictable and often hostile environment. Most bacteria, except mycoplasmas, have a complex cell wall composed of a mixture of polymers made of carbohydrates and amino acids. These are the peptidoglycan polymers that can provide cell rigidity and act as a physical barrier between the cell and its surrounding. In response to the different environments, some species of Gram-positive bacteria and Gram-negative bacteria secrete high concentrations of the exopolysaccharides (EXPs) deposited onto the bacterial surface (Figure 2). Their roles include basic functions such as maintaining structural integrity and preventing desiccation, to more complex activities of facilitating the interaction within bacterial communities. The bacterial EXPs have been found in many pathogenic bacteria and have a direct impact on human health because of their ability to form multicellular conglomerates called biofilms.