Carotenoids' inclusion in food matrices presents multiple challenges related to their low stability and low water solubility. The inclusion of carotenoids in complexes with cyclodextrins constitutes a promising technology for the stabilization of these pigments, with possible advantages in terms of their stability in food matrices.

Pigments and dyes play an important role in the food industry as enhancers of homogeneity and stability of color and appearance of the products. The most widely used colorants in the industry are synthetic azo-compounds, classified as artificial colorants, due to their high solubility in water and chemical stability towards multiple stimuli. However, some of the most used natural colorants, such as carotenoids, have low water solubility and stability [1]. Different approaches have been proposed to solve these disadvantages, such as micro- and nano-encapsulation with host molecules, of which nano-encapsulation by formation of inclusion complexes has been highlighted as a straightforward and effective alternative, with possible benefits in terms of increased stability, solubility, and bioavailability of the guest compounds.

Most of the published evidence on the use of inclusion complexes as encapsulation systems relies on a model or proof-of-concept guest compounds, and the complex formation methodologies have been tested at laboratory or bench scale. Several authors have employed encapsulation with β-cyclodextrin since it is a molecule of great commercial interest, cheaper compared to its α and γ counterparts, and allows the encapsulation of hydrophobic molecules as it has a non-polar center due to the arrangement of the internal hydrogens of the truncated cone, while increasing the hydrophilicity of these molecules due to the conformation of the external hydrogens [2][3]. The use of these encapsulations in natural extracts has been of great interest in the food industry, since they generate great thermal, chemical and color stability in the product and permit exploring the use of natural ingredients as colorants to replace the controversial use of artificial colorants [2][4][5]. In order to enhance the commercial application of this encapsulation strategy for natural carotenoids in the food industry, attempts must be made to propose possible scaleups based on the published evidence on encapsulation of carotenoids, or carotenoid-rich extracts, via the formation of cyclodextrin inclusion complexes.

Encapsulating is an expanding technological strategy, which refers to the incorporation or dispersion of active components (cargo compounds) in the form of small vesicles, of micrometer or nanometer diameters in structures generally formed by polymers or oligomers that function as a vehicle. The encapsulation of bioactive compounds commonly seeks to improve their stability against degrading factors, e.g., electromagnetic radiation, high temperatures, presence of reactive chemical species, their solubility (especially in water) and their bioavailability when ingested [1][6]. 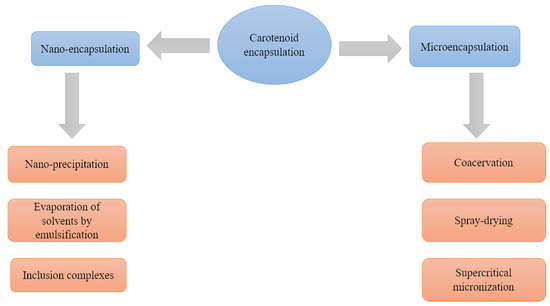 The process involves the coating of a solid, liquid, or gaseous substance with a coating material. The aim is to make the material non-reactive and to achieve long-term stability in structures larger than 1 μm [8] through various techniques, of which the principles and background of their use in carotenoid encapsulation are discussed below.

The technique involves liquid–liquid separation into a solution containing charged macro ions, producing a polymer-rich phase; the separation of the polymer from the supernatant is followed by deposition of the resulting coacervate containing the polymer around the active ingredient [1].

The objective of this technique is to increase the area of heat and mass transfer between a liquid that contains both the cargo and vehicle materials (usually a polymer or polymer combination) dispersed or dissolved in a solvent (usually water or an aqueous solution), and a drying gas. To carry out this technique, a series of steps must be considered. Initially, the main material to be encapsulated, filling or internal phase [9] is solubilized, dispersed or emulsified with the encapsulating agent in a solution, suspension or emulsion. It is homogenized and fed to the spray-dryer where it is atomized by a nozzle and a hot gas, generally air, so that the contact between drops and the drying gas occurs.

This technique is used to avoid high temperatures that can affect the quality of carotenoids; carbon dioxide in supercritical conditions is commonly used as a solvent due to its low cost and ease of downstream removal, given by its low critical pressure and temperature (31.2 °C and 7.38 MPa), high volatility and diffusivity. The supercritical anti-solvent procedure seems to have the more suitable results for carotenoid encapsulation and also the higher level of carotenoid protection [8]. In this process, the solvent (CO2) is used as an anti-solvent because it does not dissolve the solute but is miscible with the solvent [10]. First, the cargo material is dissolved in an organic solvent to reach supercritical conditions required by the CO2 in a tank.

Emulsion formation has generally been used for encapsulation of bioactives in aqueous solutions, which can be used directly in a liquid form, or can be dried to form powders after emulsification, for instance by freeze-drying or spray-drying techniques. The emulsion consists of two immiscible phases, where one of the liquids is dispersed in the form of small spheres in the other. In general, emulsions can be water in oil W/O or oil in water O/W [11].

Nano-encapsulation seeks to form structures or particles that function as nano-carriers, which implies that at least one of the characteristic dimensions of the capsules is smaller than 100 nm (or 1 µm in some approaches). One of the main advantages of these techniques over microencapsulation is that they provide larger surface areas, which in turn can improve dispersibility in aqueous media, as well as penetrability throughout epithelial tissues of the encapsulated compounds, thus potentially enhancing their inclusion in liquid matrices, as well as their bioavailability [1]. The most widely used nanoencapsulation methodologies that have been applied to carotenoids are briefly described below.

This technique refers to the precipitation of a polymer from an organic solvent and the subsequent diffusion into aqueous medium [12]. It is based on the spontaneous emulsification between an internal organic phase containing the dissolved polymer, the cargo compound and the organic solvent, and an external aqueous phase [7]. In the procedure, the polymer is in the organic phase, which is poured into the aqueous phase under slight magnetic agitation. The technique has been used to encapsulated β-carotene in polymers as ethylcellulose with results of a size particle of 60 ± 9 nm and encapsulation efficiency of 74 ± 2% and in zein with a size of 83 ± 8 nm and encapsulation efficiency of 93 ± 4% [13].

Inclusion complexes are defined as the supramolecular association of a ligand (encapsulated bioactive) in the cavity of a substrate (cover material) using a hydrogen bond, Van der Waals forces or hydrophobic effect directed by entropy [15]. This technique is used to encapsulate volatile or small-molecule compounds, such as vitamins and essential oils, greatly improving their stability. Only a few components can be used as a substrate for this purpose, for example β-cyclodextrin and β-lactoglobulin. It gives the encapsulated substance high stability and provides high encapsulation yields.

Cyclodextrins are rings linked by α (1→4) of d-glucopyranosyl units, composed by 6, 7 or 8 carbons, being α-, β-, and γ-cyclodextrin those of greater commercial interest (Figure 2). Table 1 presents relevant physicochemical properties of the most common cyclodextrins. These compounds are produced on an industrial scale from starch by means of the enzyme cyclodextrin glycosyltransferase, obtained by different bacteria [16]. A selective synthesis of some of the three varieties can be made by precipitation of the bacterial growth media in specific organic solvents, e.g., toluene, decanol or butanone [17]. 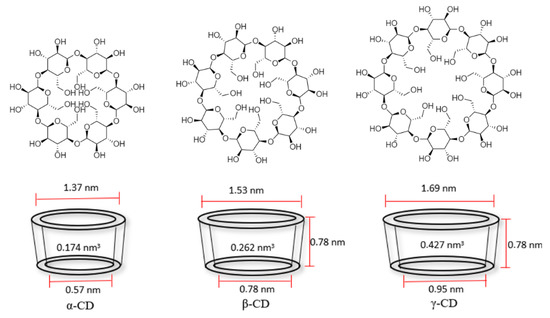 Figure 2. Chemical structure and cavity dimensions of cyclodextrins. α-, β-, and γ-cyclodextrin (α-CD, β-CD, and γ-CD) from left to right adapted from [3][21].

As observed in Figure 2, the cyclodextrin forms a truncated cone with a hydrophobic center and a hydrophilic exterior. This allows its hydrophobic center to generate weak interactions (Van der Waals forces) with nonpolar molecules that remain in its interior, while its exterior makes it more soluble or dispersible in an aqueous media, a feature that is of great interest for the protection of poorly water-soluble molecules with use in medicine, food or even cosmetics [2][3].

Inclusion complex formation takes advantage of the truncated cone shape of cyclodextrins to encapsulate molecules capable of occupying the same or a smaller volume of the cavity. This interaction turns the cyclodextrin into a host and the internal molecule into a guest, which interact by non-covalent molecular forces such as Van der Waals forces, or by hydrogen bridges. It is used extensively in the encapsulation of nonpolar molecules in order to increase their solubility and protect them from the environment, since cyclodextrins are not toxic to humans [2][3].

4. Previous Studies of Encapsulation of Carotenoids by Formation of Inclusion Complexes in Cyclodextrins

In order to review the background of the use of inclusion in complexes of β-cyclodextrin as a technique for the encapsulation of carotenoids, a synthesis of the inclusion methodologies, recovery, inclusion efficiency and instrumental characterization techniques, as reported by different authors, is presented in Table 2. The methodologies for the preparation of carotenoid/cyclodextrin complexes can be classified in three main types: ultrasound-assisted, mixture with mechanical stirring, and physical mixture. In general, the three of them, although variable, present high inclusion efficiencies and yields.

As shown in Table 4, the extract: cyclodextrin ratios vary between 1:2 and 1:10, except for one study [22] that uses excess cyclodextrin to ensure complete encapsulation. The ratio most commonly reported as optimal is 1:4, which offers the highest recoveries (mass of complex recovered/mass of initial material*100) and inclusion efficiencies (measured extract content/theoretical extract content *100, assessed by UV-vis spectrophotometry); likewise, Lobo et al. [2] reported that with lower ratios, it is possible to obtain the same pigmentation power as with higher ratios, suggesting to avoid excesses of cyclodextrin.

In addition to the characterization techniques previously described [2][4], the stability of the complexes has been evaluated by tristimulus colorimetry, using CIELAB space (L*, a* and b* coordinates), through the observation of the loss of color over time of the synthesized complexes: in the cases in which carotenoids were used, the authors reported an improvement in color stability over time. In addition, Lobo et al. [2], and De Oliveira et al. [22], confirmed an improvement in the solubility of the carotenoids used through the formation of inclusion complexes.

The encapsulation of carotenoids using cyclodextrin offer positive and promising results that are potentially applicable for obtaining novel coloring additives. Further research focused on the insights of the molecular and physicochemical characteristics of the complexes carotenoid, as well as on the efficiency, recovery, and mechanisms of losses during their formation, are of great scientific interest for their application in the industry of natural food additives, and functional ingredients.