Galectin-3, predominantly located in the cytoplasm and expressed on the cell surface, is a β-galactoside-binding lectin which is important in numerous biological activities in various organs, including cell proliferation, apoptotic regulation, inflammation, fibrosis, and host defense. Galectin-3 is often secreted into biological fluids, like serum and urine, thus used as a biomarker. It is also released from injured cells and inflammatory cells under various pathological conditions. Galectin-3 plays an important role as a diagnostic or prognostic biomarker for certain types of heart disease, kidney disease, viral infection, autoimmune disease, neurodegenerative disorders, and tumor formation. In particular, galectin-3 is extremely useful for detecting many of these diseases in their early stages.

Galectins are a family of widely expressed β-galactoside-binding lectins in modulating “cell-to-cell” and “cell-to-matrix” interactions in all organisms [1][2][3]. Mammalian galectins have either one or two highly conserved carbohydrate recognition domains (CRDs), recognizing β-galactoside residues, to form complexes that crosslink glycosylated ligands [4][5][6].
Galectins have been classified into three subgroups according to their CRD number and function (Figure 1): (1) Proto-type galectins (galectin-1, -2, -5, -7, -10, -11, -13, -14, and -15), containing a single CRD that form non-covalent homodimers, (2) tandem-repeat galectins (galectin-4, -6, -8, -9, and -12), carrying two CRD motifs connected by a peptide linker, and (3) chimera-type galectin (galectin-3), which are characterized by having a single CRD and an amino-terminal polypeptide tail region [2][5][6]. All members of galectin family were numbered consecutively by order of discovery (Figure 1). Galectins are ubiquitously present in vertebrates, invertebrates, and also protists [1]. 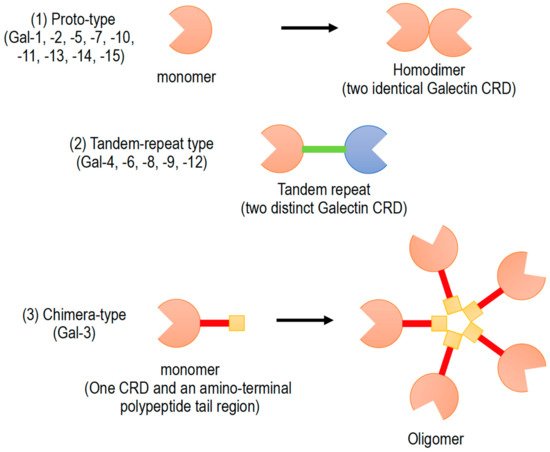 Figure 1. Schematic diagram of galectin family members. Galectin members are divided into three types based on the organization of galectin carbohydrate recognition domain (CRD).
Galectins play important roles in cell-to-cell and cell-to-matrix interactions by binding to endogenous glycans. Galectin signaling can regulate cellular functions at the cell surface. Biological functions of galectins, which are not yet fully understood, include roles in development, tissue regeneration, regulation of immune cell activities, and other important cellular functions [1][2].
Galectins are important regulators of inflammatory responses and immune system. In fact, galectins are expressed in many inflammatory cells, such as macrophages [7]. Depending on the inflammatory environment, galectins promote pro-inflammatory or anti-inflammatory responses [2][5][6]. Recently, the galectin-mediated specific molecular recognition of glycans on the cell surface have revealed their roles as innate immune functions against potential pathogens and parasites. As a part of the innate immune system for microbial recognition/effector functions, galectins bind to exogenously exposed glycans on the surface of viruses, bacteria, fungi, and parasites [3].

Gal-3, approximately 30 kDa chimera-type galectin, is expressed in the nucleus, cytoplasm, mitochondrion, cell surface, and extracellular space. Gal-3, to an equal or greater extent than other galectins, plays an important role in cell-to-cell or cell-to-matrix interactions, cell growth and differentiation, macrophage activation, antimicrobial activity, angiogenesis, and apoptosis [8]. Extracellular and intracellular activities of Gal-3 are shown in Figure 2, with references detailed in the caption. 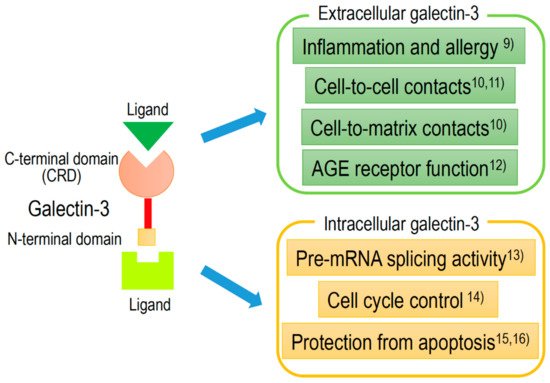 Figure 2. Schematic structure of galectin-3 and the intracellular and extracellular functions.
Recently, Gal-3 has been indicated to be involved in the following broad pathological processes: Inflammation [9], fibrosis, cell-to-cell [10][11] or cell-to-matrix [12] contacts, cell proliferation [13][14], and protection from apoptosis [15][16]. Furthermore, many studies have revealed that Gal-3 expression is detected in many disease conditions, such as heart disease [17][18][19][20][21][22][23], kidney disease [24][25][26][27], diabetes mellitus [24][25][28], viral infection [29][30][31][32], autoimmune disease [33][34][35][36], neurodegenerative disorders [37][38][39][40][41][42], and tumor formation [43][44][45][46][47][48][49][50][51][52].
Since Gal-3 is readily secreted to the cell surface and into biological fluids (e.g., serum and urine), from injured cells and inflammatory cells, Gal-3 may be used as a sensitive diagnostic or prognostic biomarker for various pathological conditions [44][52][53][54]. Furthermore, Gal-3 may also be useful for detecting very early stage of some diseases. Gal-3 has already been used as a novel biomarker in the early detection of myocardial dysfunction and heart failure [55]. Gal-3 has been validated as a biomarker of fibrotic degeneration in acute myocarditis following cardiac viral infection. In an animal model of heart failure, serum Gal-3 levels was shown to be used as an diagnostic biomarker for early detection of cardiac degeneration in acute myocarditis [31] and acute myocardial infarction [56]. Furthermore, Gal-3 is also a good specific marker for indicating the early stage of glioma tumorigenesis [43].
Serum levels of Gal-3 are usually determined by enzyme-linked immunosorbent assay (ELISA) using commercially available materials [57][58]. The localization or time-course of Gal-3 expression in various organs are examined immunohistochemically using commercially available anti-Gal-3 antibodies [31]. Gal-3 levels may be changed by different clinical factors in patients, depending on the underlying pathological conditions. Some previous studies indicated contradicting results on the association between Gal-3 levels and the prediction of clinical outcomes [59][60][61]. These studies, however, might be limited by the insufficient size of the clinical sample. In this review, we discuss and summarize recent developments of the biomarker characteristics and long-term outcome prediction of Gal-3 in patients with various types of diseases (Table 1) as well as associated animal models (Table 2). Furthermore, we provide an overview of Gal-3 as a next-generation biomarker for detecting early stage of various diseases.
Table 1. Galectin-3 expression in various diseases and potential use as clinical biomarkers.
Table 2. Galectin-3 expression and findings as biomarkers in animal models.

3.1. Clinical Use of Gal-3 as a Possible Biomarker in Heart Disease

Some practical guidelines have indicated the utility of established or recommended biomarkers in diagnosis and risk management of heart failure. In fact, American College of Cardiology Foundation (ACC)/American Heart Association (AHA), Heart Failure Society of America (HFSA), and European Society of Cardiology (ESC) have established the natriuretic peptides (NPs), circulating hormones of cardiac origin that play an important role in the regulation of intravascular blood volume and vascular tone, as useful diagnostic biomarkers in the patients suspected of heart failure [96][97][98][99]. However, the utilities of novel biomarkers other than NPs are less established in clinical practice. The recommendations on the clinical assessment and analytical perspectives of novel biomarkers in diagnosis and management of heart failure were prepared by the National Academy of Clinical Biochemistry (NACB) [100]. In these criteria, novel biomarkers need to be able to recognize fundamental causes of heart failure, assess its severity, and foresee the risk of the disease progression. The ACC/AHA guidelines recommended the use of Gal-3 as a biomarker for assessment of myocardial fibrosis in heart failure, however, the ESC has not recommended the clinical use of Gal-3 [101].

3.4. Usefulness of Gal-3 in Animal Models

As mentioned above, the roles of Gal-3 in heart failure and cardiovascular disease are still controversial clinically, however, many animal models clearly demonstrate the possibility of Gal-3 as a novel biomarker of heart disease. Overexpression of myocardial Gal-3 during early pre-symptomatic stages of heart failure has been well documented in several studies using animal models. Intrapericardial injection of recombinant Gal-3 in healthy rats significantly increased the degree of myocardial fibrosis with ventricular remodeling, and the induction of heart failure [80][81]. And Gal-3 was indicated to colocalize with activated myocardial macrophages [80]. On the other hand, cardiac remodeling and dysfunction induced by Gal-3 was prevented by a pharmacological inhibitor of Gal-3, N-acetyl-seryl-aspartyl-lysyl-proline [80]. In a rat model of heart failure, increased Gal-3 was detected at hypertrophied hearts, prior to the development of heart failure [81]. These findings imply that Gal-3, at the early stages of inflammatory responses, may be a potential therapeutic target in the treatment of heart failure. A rat model of right ventricular heart failure, created by banding of the pulmonary artery, demonstrated that Gal-3 was significantly increased in both right and left ventricles and that protein kinase C promoted cardiac fibrosis and heart failure by modulating Gal-3 expression [82]. In order to clarify the important role of myocardial Gal-3 expression during the early stage of heart failure, the time-course analysis of cardiac and serum Gal-3 in viral myocarditis, which was induced at 12, 24, 48, 96 h, 7 and 10 days after specific virus-inoculation, was performed using an animal model [31]. Gal-3 was indicated as a useful histological biomarker of cardiac fibrosis in acute myocarditis following viral infection and serum Gal-3 levels might be an early diagnostic method for detecting cardiac fibrotic degeneration in acute myocarditis [31].
However, the clinical data has not shown that circulating Gal-3 levels reflect myocardial Gal-3 levels or myocardial fibrosis, although circulating Gal-3 has been demonstrated as a potential predictor for clinical outcome in several cohort studies, as mentioned earlier [94][95]. In clinical settings, since various stages and degrees of myocardial inflammation and fibrosis may be present in a patient with heart disease, serum Gal-3 levels may reflect a sum of different pathophysiological conditions [93]. Thus, it may be that the circulating Gal-3 levels in a patient with various stages of heart disease will not adequately reflect myocardial inflammation and fibrosis.

3.5. Clinical Use of Gal-3 as a Next-Generation Biomarker in the Future

Endomyocardial biopsy is widely used as a diagnostic tool for patients with heart diseases, such as myocarditis and other cardiomyopathies, which are often difficult to diagnose by conventional radiological imaging methods [103]. The histologic examination of endomyocardial biopsy is still the gold standard for final diagnosis, such as for myocarditis and other cardiomyopathies like cardiac fibrosis, despite the continuous advancements in diagnostic and therapeutic approaches [104][105][106].
Unlike uniform materials from experimental animals, there are many variables in human biopsy materials by its nature. Human biopsies are usually obtained under different conditions, e.g., variable time periods between biopsy and processing, as well as variation in disease onset or severity. In contrast, the serum levels of Gal-3 reflect myocardial Gal-3 expression or cardiac fibrosis by using a sophisticated animal model for time-course histological examination [31]. It is possible that the difference between experimental data and clinical findings is due to a wide variability in clinical settings with differences in sample collection and disease stages. Since experimental animal data clearly indicate that serum Gal-3 might be an early diagnostic biomarker for cardiac degeneration or fibrosis in acute myocarditis [31], further studies are thus needed to investigate whether such findings are also applicable to cardiac degeneration or fibrosis in humans. Gal-3 can be used as a predictive biomarker for the early stage or new-onset of heart failure, especially if it is only the first single pathological factor. In addition, Gal-3 can also be used as an additional indicator for detecting worse prognosis, mortality, and readmission.