Pancreatic ductal adenocarcinoma (PDAC) is the fourth leading cause of cancer deaths in the US, and it is expected to be the second leading cause of cancer deaths by 2030. The lack of effective early screening tests and alarming symptoms with early undetectable micro-metastasis at the time of presentation play a vital role in the high death rate from pancreatic cancer. In addition to this, the low mutation burden in pancreatic cancer, low immunological profile, dense tumorigenesis stroma, and decreased tumor sensitivity to cytotoxic drugs contribute to the low survival rates in PDAC patients. Despite breakthroughs in chemotherapeutic and immunotherapeutic drugs, pancreatic cancer remains one of the solid tumors that exhibit meager curative rates.

According to the CDC’s latest data, pancreatic ductal adenocarcinoma (PDAC) is the fourth leading cause of cancer deaths in the US [1], and it is expected to become the second leading cause of cancer death by 2030 [2]. In addition to the late presentation of the disease and lack of early alarming symptoms, a large majority of patients with pancreatic cancer present with either locally advanced or metastatic disease upon diagnosis; all of these factors contribute to the projecting burden of death by PDAC [3]. Furthermore, PDAC patients have an average 5-year survival rate of 10% [4]. Moreover, the deep location of the pancreas, aggressive nature of PDAC, and lack of reliable screening tests make it very hard for a primary physicians to catch and diagnose the disease at earlier and more manageable stages. PDAC commonly occurs as a sequence of accumulating genetic mutations in somatic cells, and less commonly, due to mutations in germline cells, particularly the case in familial PDAC [5][6]. With the advantage of next-generation gene sequencing, the PDAC pathophysiology is now better understood, and there is an emerging need for adding pathological classification to the current clinical and anatomical staging to formulate more personalized treatment plans [7][8]. Over the last decade, there has been several breakthroughs in early screening modalities and cancer therapeutics, particularly in the context of gastrointestinal malignancies; however, these have not matched the increment in both incidence and mortality rates of PDAC. Therefore, finding new strategies and therapeutic agents to improve the outcomes and survival of PDAC is an urgent need.

The only curative therapy for PDAC is surgical excision [9]; however, only 10–20% of patients are found to be eligible for resection at the time of diagnosis. More than 50% of patients are found to have metastatic disease at the first presentation [10]. To date, treatment approaches for patients with PDAC depend on the clinical and anatomical stage of the disease [11]. Notably, a great deal of ongoing studies are relying on the molecular pathology of PDAC to identify individualized, tailored plans for PDAC patients [12][13][14]. The initial workup process of PDAC aims to confirm the diagnosis and to look for evidence of distant metastasis [15][16]. Using imaging modalities, non-metastatic PDAC can be classified into resectable, borderline resectable, and locally advanced PDAC based on the involvement of the surrounding arterial (superior mesenteric artery, common hepatic artery, and celiac axis) and venous (superior mesenteric vein or portal vein) structures, and other nearby organs and lymph nodes [17][18]. According to the National Comprehensive Cancer Network (NCCN) guidelines published in 2017, certain criteria should be applied to obtain eligibility for surgical resection; the main goal is to involve as many patients as possible under the umbrella of surgical treatment [19]. The treatment outcome and the median overall survival depends in the first place on the stage of the PDAC, as mentioned in Figure 1. 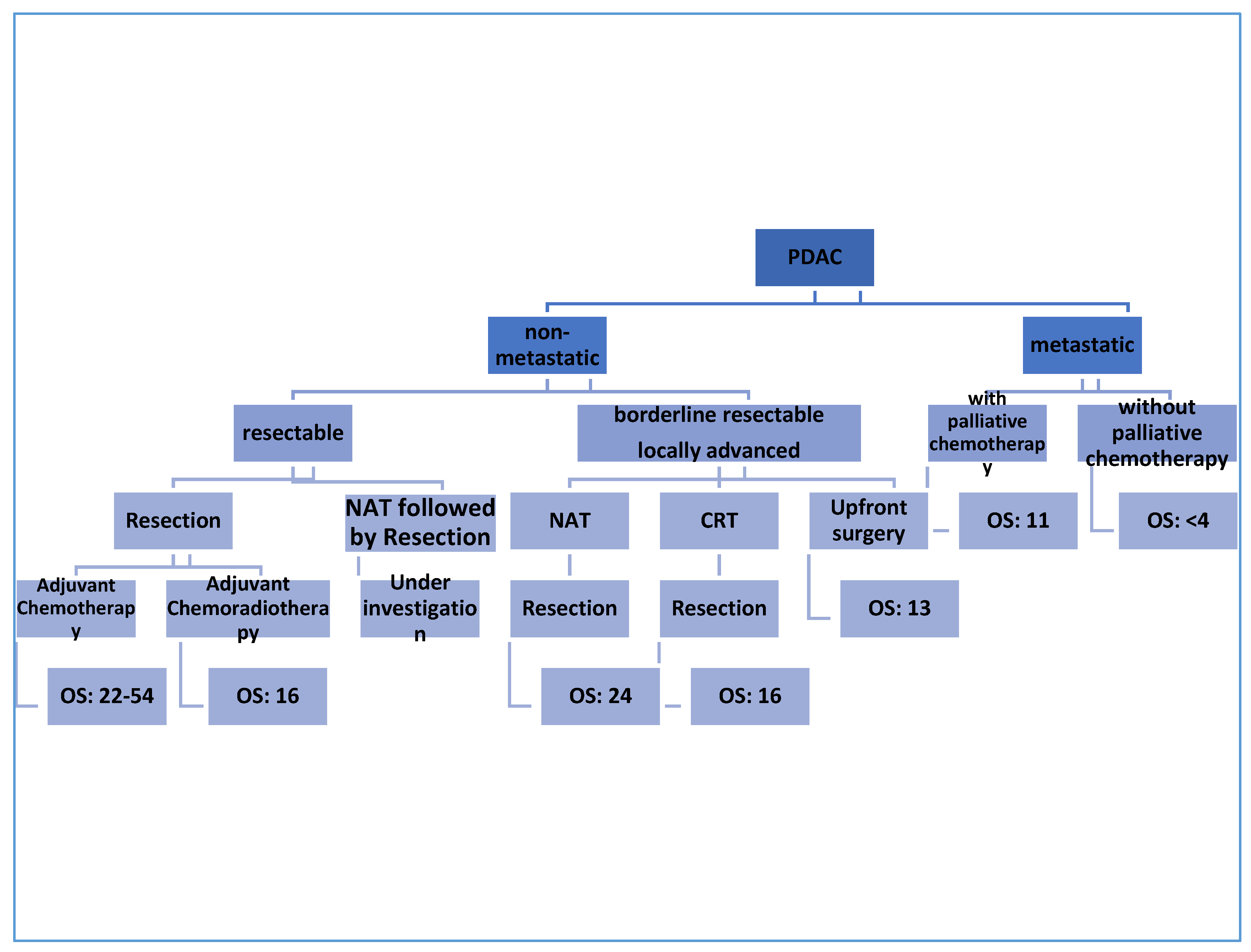 A better understanding of the molecular pathology of PDAC could allow researchers to investigate more new modalities for PDAC treatment [20][21][22]. Most of these strategies are still under investigation, and some of them have been aborted because of negative results. As a general rule, the combination of these new modalities (one targeted molecule agent and one cytotoxic agent) leads to better outcomes [23]. Figure 2 summarizes the currently available novel therapies for PDAC. 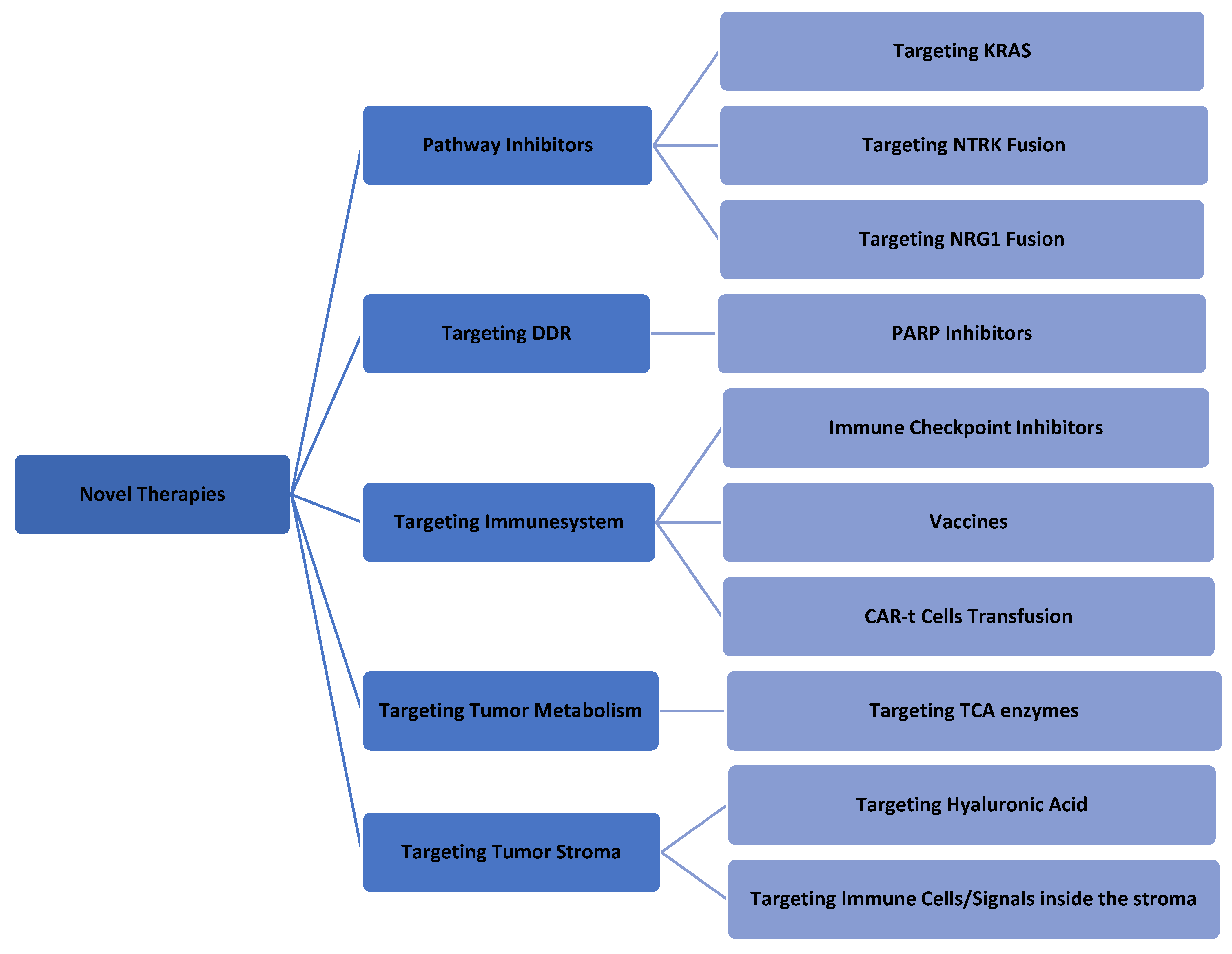 Figure 2. Summary of the last novel therapeutics in PDAC treatment.

In summary, surgical treatment remains the only available curative therapy for PDAC. Adjuvant and neoadjuvant therapies represent the cornerstone for PDAC treatment, while a large number of novel targeted/immunomodulatory therapies—along with cytotoxic drugs—are lightening the road, with breakthroughs in PDAC management expected over the coming decade. In the era of precision medicine, and with advancements in next-generation gene sequencing, examining genetic mutations in PDAC is considered a mandatory step to formulate a well-tailored and personalized therapy plan. However, focusing on genetic mutations in PDAC alone is not sufficient; the role of epigenetics in PDAC is another area that requires further exploration through clinical trials. For the sake of depth and focus, the rle of epigenetics has not been discussed in this review article.