Cathepsin K is a papain-like cysteine protease with high matrix-degrading activity. Among several cathepsins, cathepsin K is the most potent mammalian collagenase, mainly expressed by osteoclasts. This review summarizes most of the recent findings of cathepsin K expression, highlighting its role in renal tumors for diagnostic purposes and as a potential molecular target. Indeed, cathepsin K is a recognized diagnostic tool for the identification of TFE3/TFEB-rearranged renal cell carcinoma, TFEB-amplified renal cell carcinoma, and pure epithelioid PEComa/epithelioid angiomyolipoma. More recently, its expression has been observed in a subgroup of eosinophilic renal neoplasms molecularly characterized by TSC/mTOR gene mutations. Interestingly, both TSC mutations or TFE3 rearrangement have been reported in pure epithelioid PEComa/epithelioid angiomyolipoma. Cathepsin K seems to be a downstream marker of TFE3/TFEB rearrangement, TFEB amplification, and mTOR pathway activation. Given the established role of mTOR inhibitors as a pharmacological option in renal cancers, cathepsin K could be of use as a predictive marker of therapy response and as a potential target. In the future, uropathologists may implement the use of cathepsin K to establish a diagnosis among renal tumors with clear cells, papillary architecture, and oncocytic features.

Cathepsin K belongs to the papain-like cysteine peptidase family. It is a member of lysosomal cysteine protease, with the main function of mediating bone resorption under normal and pathological conditions. Cathepsin K is encoded by a CTSK gene located on chromosome 1q21.3, with eight exons and seven introns, and a similar organization of cathepsin L and cathepsin S. Mutations on the CTSK gene lead to pycnodysostosis, an autosomal recessive disease characterized by osteosclerosis with increased bone fragility, dysmorphic facial features, and short stature [1]. From the structural aspect, cathepsin k is a protein composed of 329-aminoacid comprising of an N-terminal signal sequence (15-amino-acid long), a propeptide (99-amino-acid long), and a catalytic unit (215-amino-acid long). The active site of cathepsin K is at the top of the molecule and contains the catalytic dyad cysteine–histidine [2].
Cathepsin K degrades collagens at different sites in the N-terminus region, and has recently been named the most potent mammalian collagenolytic endopeptidase [3]. It is mainly secreted by activated osteoclasts to degrade collagen and other matrix proteins during bone resorption, but also in the hematopoietic stem cells mobilization from the endosteal niche [4]. Because of its activity in bone resorption, it has become an important target for the treatment of osteoporosis (bone resorption exceeds bone formation), even though there is no approved drug so far [4][5]. The activity of cathepsin K is modulated by several factors: RANKL, NFAT, and microphthalmia transcription factor (MiTF) enhance cathepsin K expression, and therefore osteoclast formation and bone resorption. On the other hand, interferon (IFN)-gamma, estradiol, calcitonin, and calcium reduce it [6].
Beyond the bone, cathepsin K plays a crucial role in the central nervous, respiratory, and cardiovascular systems [7]. It is detected in neurons, as well as in glial cells, in the bronchial and alveolar epithelial cells, and in the alveolar macrophages in the normal lung, and a small amount of cathepsin K is expressed in the normal heart. Its physiological role in cellular protein turnover, collagen degradation, and remodeling of the extracellular matrix may explain the important role of cathepsin K in neurological disorders, cardiac dysfunction, and pulmonary fibrosis [8] (Table 1). It is also expressed in multinucleated giant cells, Langhans cells, and skin fibroblasts, which play an important role in the homeostasis of the dermal extracellular matrix during wound healing [9]. Taken together, the variety of processes in which cathepsin K is involved and the several diseases genetically or epigenetically associated with cathepsin K expression in either mesenchymal or epithelial tissues explain the increasing interest of scientists in this molecule.
Table 1. Cathepsin K in human diseases (except kidney).
RCC: renal cell carcinoma; ESC: eosinophilic solid and cystic; EVT: eosinophilic vacuolated tumor; n.a.: not available.

2. Cathepsin K in the Differential Diagnosis 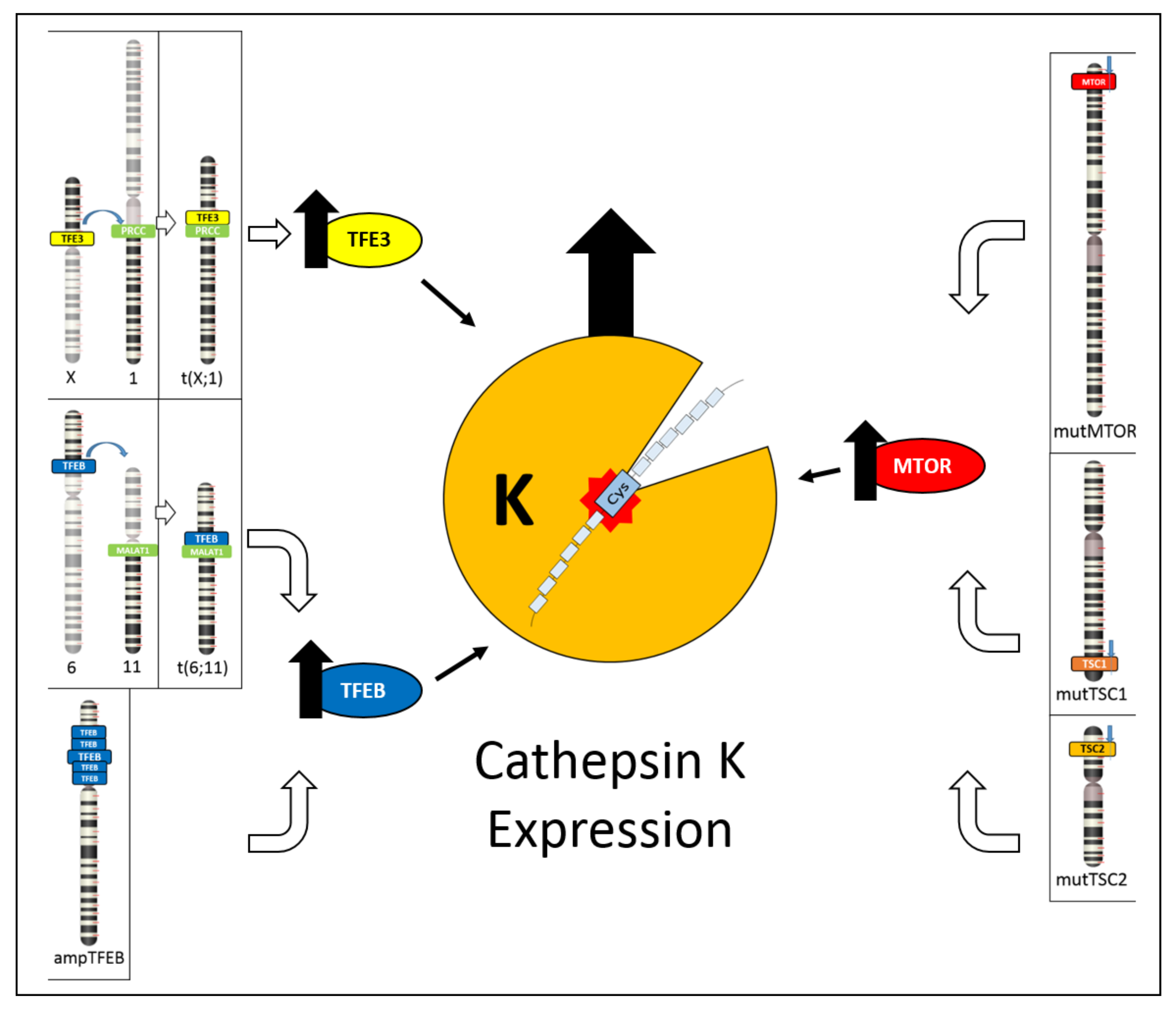 Figure 1. Schematic illustration showing the different mechanisms leading to cathepsin K expression. On the left, TFE3 hyperexpression due to TFE3 gene translocation and TFEB hyperexpression due to either TFEB gene translocation or TFEB gene amplification cause cathepsin K expression. On the right, inactivating mutations of TSC1/TSC2 genes or activating mutations of mTOR gene causes mTOR pathway activation, resulting in cathepsin K expression.
This aspect would be also interesting from a therapeutic point of view, especially in this era of personalized medicine, in which identifying biomarkers that can better predict response to therapy is crucial. mTOR inhibitors are an important pharmacological option for patients with tumors bearing TSC1/TSC2 mutations, and cathepsin K can be useful to detect these tumors. Understanding the precise interactions between cathepsin K and the mTOR pathway remains unknown and further studies are warranted to shed light on such mechanisms.