The incidence of herpes zoster (HZ) in patients infected with HIV is higher than that of the general population. However, the incidence of HZ in HIV patients receiving antiretroviral therapy (ART) remains unclear.

Herpes zoster (HZ), also known as shingles, is caused by the reactivation of varicella zoster virus (VZV), which remains latent in the sensory ganglia following varicella infection [1]. HZ is a human immunodeficiency virus (HIV)-associated opportunistic infection. HIV infected populations have a 3- to 20-fold higher risk of contracting HZ than HIV seronegative individuals [2][3][4][5][6]. A systematic review and meta-analysis of the HZ incidence in ART-naive patients was 9.4%. During the first year of ART, the incidence was 2.3%, but this reduction was not statistically significant [7].
Even though the introduction of ART has improved the survival of those living with HIV, the incidence of HZ among HIV cohorts remains higher than that of the general population [4][8]. The incidence of HZ in the HIV cohort was 9.3–141 per 1000 patient years (PY)s [8][9][10]; but the incidence of HZ in the general population is only 3–5 per 1000 PYs [11]. The general population lifetime risk for HZ is between 23.8% and 30% and affects approximately one in four people in Europe; however, for those aged >85 years, the risk increases to one in two people [12].
ART was previously associated with reduced risk of herpes zoster and other opportunistic infections and could substantially improve the quality of life among HIV infected patients [7]. The long-term effects of ART on HZ incidence among HIV infected cohorts have been inconsistent across previous studies. A study in 2005 noted that the HZ incidence has not significantly decreased since the advent of ART [9]. Conversely, other prior studies found a reduction in the risk of HZ after the initiation of ART in North America, Europe, Taiwan and Africa [4][8][10][13][14][15][16][17]. Several studies have shown an increase in the HZ incidence during the first to fourth months following ART therapy, which suggests that HZ may be a feature of immune reconstitution inflammatory syndrome (IRIS) [9][18][19].
A better understanding of the risk factors for HZ for the HIV infected population may provide valuable information for health care professionals to identify adult patients at a heightened risk and could help formulate appropriate policies for vaccination strategies for the HIV-infected population [20]. Therefore, the objective of meta-analysis aimed to systematically review studies estimating the incidence and risk factors for HZ in the post-ART era among people living with HIV (PLWH) and discuss implications based on the updated evidence. 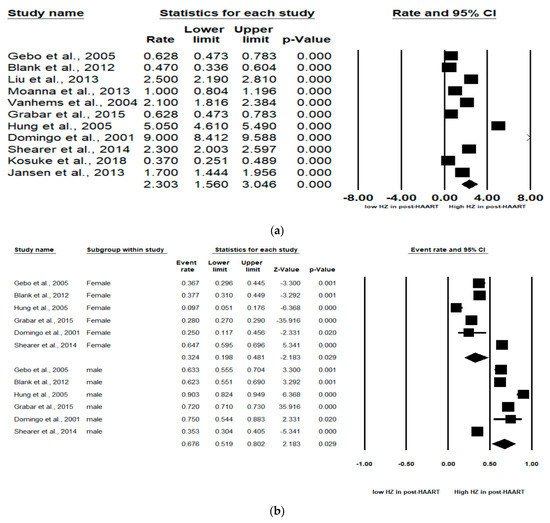 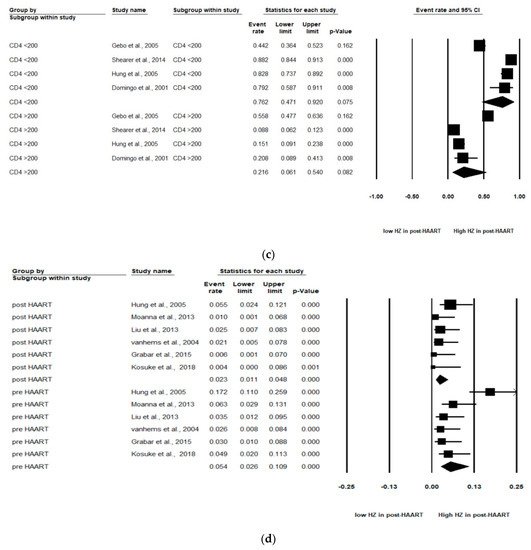 Performed several meta-regression analyses, by which samples were segmented by sex, CD4 count level and ART use.

In six studies, males and females were analyzed. The subgroup analyses revealed that males were at significantly higher HZ risk than females (Pooled RR = 0.32 (female) and 0.68 (male); 95% CI: 0.20–0.48 (female) and 0.52–0.80 (male)). Larger effect sizes were observed for the HZ incidence for males than for females in the HIV-infected population (Figure 2b).

2.5. Subgroup Segmented by ART Use

We found a high level of heterogeneity in the HZ incidence across the 11 studies (I2 = 99.3%) (Figure 2a). Publication bias was analyzed by generating a funnel plot (Figure 3) and using Egger’s test.