We propose a new photocatalytic interface prepared by High-Power Impulse Magnetron Sputtering (HiPIMS) and investigated for the degradation of Reactive Green 12 (RG12) as target contaminant under visible light LEDs illumination. The CuxO/TiO2 nanoparticulate photocatalyst was sequentially sputtered on polyester (PES). The photocatalyst formulation was optimized by investigating the effect of different parameters such as: the sputtering time of CuxO, the applied current and the deposition mode (Direct Current Magnetron Sputtering, DCMS or HiPIMS). The results show that the fastest RG12 degradation was obtained on CuxO/TiO2 sample prepared at 40 A in HIPIMS mode under low intensity LEDs irradiation. The better self-cleaning efficiency of 53.4% within 360 min was found with 4 mg/L of RG12 initial concentration and 0.05 % Cuwt/PESwt as determined by X-ray Fluorescence. All the prepared samples contain a TiO2 under layer with 0.02% Tiwt/PESwt. By transmission electron microscopy (TEM), both layers were seen uniformly distributed on the PES fibers. The effect of the surface-area to volume (dye volume) ratio (SA/V) on the photocatalytic self-cleaning efficiency was also investigated for the discoloration of 4 mg/L RG12. The CuxO/TiO2 photocatalyst was found to have a good reusability and stability up to 21 cycles. Ions release were quantified by mean of inductively coupled plasma mass spectrometry (ICP-MS) showing low Cu-ions release.

The textile industry is one of the largest consumers of water on our planet, and the second most polluting industry after the oil and gas industry [1][2]. Textile effluent containing synthetic dyes have toxic and carcinogenic compounds, which are stable and non-biodegradable due to the high molecular weight, the presence of azo bonds and amide groups in the molecular structure. Many of chemical and physical treatment process have shown insufficient results toward the degradation of theses pollutants. Recently, heterogeneous photocatalysis is one of advanced oxidation processes that increasingly interests researchers. Photocatalysis was seen to transform/mineralize these synthetic dyes to lesser harmful by-products before their discharging into the environment.

In the last decade, numerous works have been mostly focused on the designing and the development of new photocatalytic materials [3][4][5][6][7][8]. In this direction, different methods and preparations were investigated [3]. Sol-gel [4], hydrothermal [5], combined sol-gel/hydrothermal [6], chemical vapor deposition (CVD) [7], liquid phase deposition (LPD) methods [8] among many others were reported in the literature. In the aim of understanding the relationship between physico-chemical proprieties of photocatalyst and photocatalytic performances, various strategies have been adopted. Many studies investigated the effect of: (1) semiconductor type such as TiO2, ZnO and SnO2… [9][10]; (2) the number (mono-, bi- or tri-doping) and the ratio of doping agents (N, P, Fe, Ag…) [11][12][13][14]; (3) the support type such as polyester, cellulose, polypropylene or polystyrene [15][16][17] and (4) the substrate functional groups before the catalyst deposition [18][19].

It has been widely reported that band gap energy, surface area, particles size and chemical stability are the most important parameters controlling the reactivity of a photocatalytic material [20][21][22]. TiO2 was reported to be the most suitable photocatalyst because of its high stability, low toxicity, low cost, chemical inertness, wide band gaps and resistance to photo-corrosion [23][24][25].

The main goals of the present study are: i) to explore the HiPIMS deposition of CuxO on TiO2 under-layer, ii) to optimize the deposition parameters leading to stable thin film materials showing fast degradation of a toxic textile dye (Reactive Green 12) as target hazardous compound, and iii) the use of visible light LEDs system as efficient and economic light source for RG12 self-cleaning.

2. Photocatalytic experiment, microstructure and stable self-cleaning performance of the coating

The photocatalytic activity of the synthesized photocatalyst was evaluated by following the degradation of 15 mL of the RG12 dye solution in petri dish as reactor under magnetic stirring (see Figure 1). The reaction system included an Ultraviolet Light-Emitting Diodes system (visible light LEDs) as an irradiation source (λ=420 nm) with measured intensity of 1 mW/cm2. The initial RG12 solution was stirred in the dark for 30 min to reach adsorption–desorption equilibrium before the LEDs irradiation is ON. The concentration of dye solution samples (V=3 mL) was analyzed using a UV–Vis spectrophotometer at regular time intervals. The protective grid is made of stainless steel and is used to protect the catalyst from the possible mechanical damage caused by the stirrer. 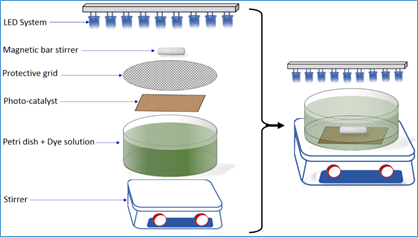 The RG12 discoloration efﬁciency (%) of the material was evaluated by the following equation:

The coated fabrics were also tested for stability by testing their recycling performance. The ions release from the fabrics were quantified using inductively coupled plasma mass spectrometry (ICP-MS). The ICP-MS resolution is of 1.2x105 cps/ppb with a detection limit of 0.2 ng/L. The washing solution from the samples were digested with nitric acid 69% (1:1 HNO3 + H2O) to remove the organics and to guarantee that there were no remaining ions adhered to the reactor wall.

Figure 2 shows the TEM imaging of the sputtered layers (HiPIMS at 40 A) on PES. The TiO2 under was sputtered to reduce the porosity of the PES leading to the continuous distribution of the CuxO upper layer [31][33]. 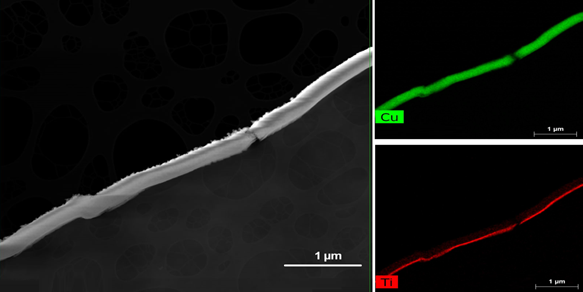 Figure 2. TEM imaging of CuxO/TiO2 deposited by HiPIMS at 40 A.

The charge transfer between the TiO2 and the CuxO at the surface and the organic pollutant depends on the diffusion length of the photo-generated charges at the interface of the film under light irradiation. The charge transfer/diffusion is also a function of the TiO2 and of the Cu-particles size and shape as previously reported [34][35].

In the aim to evaluate the stability and the reusability of the synthesized material supported on PES used in this study, successive photocatalytic cycles were applied for the degradation of RG12 (4 mg/L in each experiment) with same catalyst. As it can be seen in Figure 10, the photocatalyst has a good stability under LEDs illumination approved by the slight decrease in discoloration efficiency (about 7%) after 21 runs. The released Cu and Ti-ions from the fabrics after 1, 5, 10 and 21 washing cycles were investigated. The Ti-ions were found at very low quantities during the first 5 cycles and then reduced drastically to almost zero ppb at the end of the recycling experiment. The Cu-ions release of 12-17 ppb (during the first cycles) slow down at the end of the recycling (after the 10th cycle) to stabilize at about 2-3 ppb/cycle. These results are slightly similar to previous reports using HiPIMS deposition of CuxO or TiO2/Cu deposited on polyester for photocatalytic applications [31][15][36]. The cumulative ions release is still far below the threshold fixed by regulatory bodies for Cu- and/or Ti-ions.

CuxO thin films deposited using HiPIMS on polyester under different sputtering energies were successfully synthesized. The sputtering mode and the applied current intensity were optimized. The photocatalytic performance of the photocatalyst was evaluated for the degradation of RG12 under visible light LEDs irradiation with different dye initial concentration and surface-are to volume ratios. The recycling of the catalyst showed a high stability of the catalyst up to 21 RG12 discoloration cycles. ICP-MS showed stable ions release after the 5th cycle for both ions. This allows potential industrial applications of the reported HiPIMS coatings in the future.