Coronavirus disease 2019 (COVID-19), an emerging respiratory disease caused by severe acute respiratory syndrome coronavirus 2 (SARS-CoV-2), is swiftly leading to global health issues and becoming a pandemic worldwide. It forces much of the world to adopt a lockdown mode, causing enormous economic fallout and human suffering. Most patients with COVID-19 are either asymptomatic or show mild symptoms; however in some cases, patients progress to severe lung injuries and eventually develop multiple organ failure [1][2].
SARS-CoV-2 is a single-stranded, positive-sense RNA virus (++ssRNA) [3]. The SARS-CoV-2 genome possesses an 82% sequence identity to that of SARS-CoV and MERS-CoV. Four structural proteins including spike (S), envelope (E), membrane (M), and nucleocapsid (N) proteins have been identified in SARS-CoV-2. These protein sequences are also highly similar to that of SARS-CoV and MERS-CoV [4]. The viral structural proteins play vital roles in determining the viral life cycle, and thus provide potential therapeutic targets [5]. SARS-CoV-2 engages SARS-CoV angiotensin converting enzyme 2 (ACE2) receptor for entry and transmembrane serine protease (TMPRSS2) for S protein priming. After entering the cell, SARS-CoV-2 is subsequently taken up into endosomes and then fused with lysosomal membranes. Eventually, SARS-CoV-2 virions are released from the cell through exocytosis (Figure 1) [6]. SARS-CoV-2 infection can cause severe respiratory pathologies and lung injuries [7]. The severity of the lung injuries is correlated with the production of a cytokine storm by the macrophages during SARS-CoV-2 infection. High levels of cytokines including IL-2, IL-10, GCSF, IP-10, MCP-1, IL-7, TNF-α, and MIP-1A were observed in COVID-19 patients at high risk of mortality [1]. In parallel, an enhanced concentration of perivascular and septal mast cells was found in post-mortem lung biopsies of COVID-19 [8]. Mast cells synthesize and secrete inflammatory mediators including histamine. The roles of mast cells in SARS-CoV-2 infection have been frequently discussed [9][10][11][12]. Whether histamine released by mast cell activation during SARS-CoV-2 infection contributes to the severity of lung injury remains to be elucidated [13][14]. 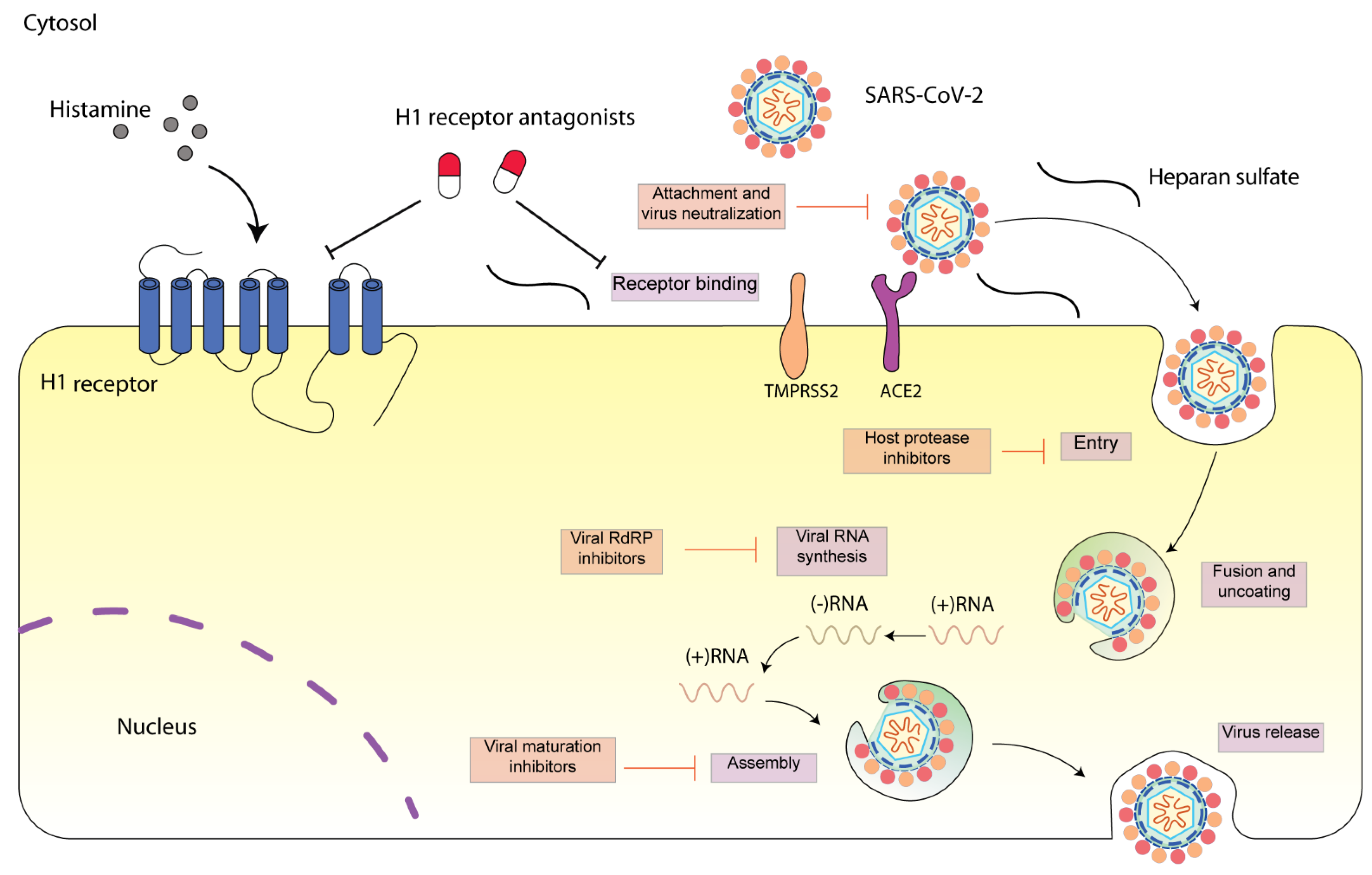 Figure 1. Schematic diagram presenting life cycle of SARS-CoV-2 and relevant inhibitors. SARS-CoV-2 cell entry begins with binding of the spike S protein to ACE2, a process that is facilitated by TMPRSS2. SARS-CoV-2 enters the cell through endocytosis, and then the virus is uncoated in the acidic environment of lysosomes. After that, SARS-CoV-2 RNA is released, followed by the reproduction of virus genome and viral proteins. Then, the viral components are assembled and released via exocytosis [15]. Each step can be targeted by relevant inhibitors. H1 receptor antagonists may inhibit SARS-CoV-2 either via H1 receptor or via ACE2 receptor. SARS-CoV-2 spike protein interacts with both cellular heparan sulfate and ACE2 through its receptor-binding domain (RBD) [16]. H1 receptor antagonists may disrupt the interaction between heparan sulfate and spike protein, inhibiting SARS-CoV-2 entry.
In most cases, the excess lung inflammation response caused by SARS-CoV-2 is self-competent; however, in some patients, it is unbalanced and non-competent, with age and comorbidities such as arterial hypertension or diabetes being acknowledged as risk factors. As a consequence, these patients require hospitalization and need to be managed appropriately. Considering the alleviation of the inflammatory response and concomitant lung injuries, anti-inflammatory drugs (non-steroidal anti-inflammatory drugs (NSAIDs) or corticosteroids) are being administered to COVID-19 patients with various treatment regimens [17][18]. However, debates exist regarding their clinical use in COVID-19 patients [19][20]. For instance, ibuprofen, an over-the-counter medication used for the treatment of pain and fever in COVID-19, has been found to increase ACE2 levels [21]. In terms of corticosteroids, a recent study showed that low-dose dexamethasone, particularly in critically ill COVID-19 patients (i.e., ICU-hospitalized patients with respiratory distress), significantly improved patient survival [22]. Nevertheless, it may disrupt the immunocompetence in COVID-19 patients [23][24][25].
Histamine and its receptors play an important role in the progression of various allergic diseases [26]. Notably, the histamine H1 receptor (H1 receptor) has been reported to regulate allergic lung responses; therefore, its antagonists have been used to treat airway inflammation [27]. Beyond its role in mediating airway inflammation, our recent experimental work has identified that deptropine, a classical H1 receptor antagonist used to treat asthmatic symptoms, potently inhibits hepatitis E virus replication [28]. Along with our finding, a growing body of evidence also demonstrated that H1 receptor antagonists can inhibit various RNA virus infections [29][30].

Consistent with HCV and Ebola, the H1 receptor antagonists may also inhibit SARS-CoV-2 infection via intervention in the early step of virus replication. It may prevent SARS-CoV-2 from entering the cell host through binding ACE2 [34]. Moreover, evidence showed that H1 receptor antagonists could inhibit SARS-CoV-2 infection through binding sigma receptor-1 (for hydroxyzine and diphenhydramine), an endoplasmic reticulum resident chaperone protein participating in early steps of SARS-CoV-2 replication [35][34]. Heparin belongs to glycosaminoglycan molecules which include heparan sulphate. During virus entry, SARS-CoV-2 spike protein was demonstrated to interact with both cellular heparan sulfate and ACE2 [16]. Therefore, disrupting the interaction between heparan sulphate and spike protein by exogenous and competitive heparin mimetics could limit the SARS-CoV-2 virus entering the cell, resulting in suppression of the inflammatory responses [36]. Histamine has been shown capable of binding to heparan sulfate [37][38]. It is interesting to investigate the involvement of heparan sulfate in the H1 receptor antagonist-mediated anti-SARS-CoV-2 activity.
Unlike H1 receptor, the proposed anti-SARS-CoV-2 mechanisms for H2 receptor antagonists are inhibition of Type 2 transmembrane serine protease (TMPRSS2) and 3-chymotrypsin-like protease (3CLpro) by famotidine [39]. However, a recent study revealed that the principal mechanism of action of famotidine for relieving COVID-19 symptoms is attributed to its on-target effect on H2 receptor activity, and is likely independent of other histamine receptors determined by competition assay [14]. Most recently, molecular docking results suggest that famotidine and cimetidine inhibit SARS-CoV-2 replication through the inhibition of non-structural proteins, including NSP3, NSP7/8 complex, and NSP9 [40]. The modes of action of anti-SARS-CoV-2 activity of famotidine needs to be further clarified.

The observation that H1 receptor antagonists exert antiviral effects, however, also fits well with recent observations that the action of H1 receptor in physiology is much broader than the conventional view that such action is mainly restricted to allergic inflammation. The endogenous histamine stimulates oleoylethanolamide biosynthesis in the liver via H1 receptor activation, regulating liver ketogenesis [45]. Epidemiological evidence as well as preclinical studies indicate that H1 receptor antagonists are associated with increased food intake, body weight, and obesity [46]. The H1 receptor was also shown to play a vital role in the control of cellular metabolism. Genetic deletion of H1 receptor in mice leads to increased abdominal adiposity and glucose intolerance [47]. Metabolism and immune responses are two fundamental biological processes that protect the cell host from viral infection. Interestingly, it has been proposed that H1 receptor can modulate innate immunity beyond its role in regulating allergic reactions [48]. Thus, the blockage of H1 receptor by its antagonists may affect the SARS-CoV-2 replication via mediation of the crosstalk between metabolism and immune responses.