Plant growth promoting bacteria (PGPB) have been the target of intensive research studies toward their efficient use in the field as biofertilizers, biocontrol, and bioremediation agents among numerous other applications. Recent trends in the field of PGPB research led to the development of versatile multifaceted PGPB that can be used in different field conditions such as biocontrol of plant pathogens in metal contaminated soils.

Plant growth is strongly influenced by many biotic and abiotic factors [1][2]. Salinity is one of the major factors, limiting the productivity of plants and therefore agricultural production. Globally, 380 million ha of agricultural land are affected by salinity [3]. This salinization is especially encountered in arid and semi-arid areas. It leads to the depletion of organic matter in soils and the accumulation of toxic ions [4]. As a result, productive agricultural land has deteriorated. On the other hand, the increase in population has increased the demand for agricultural products. This not only threatened the sufficiency of available food resources, but also necessitated the exploitation of marginal cultivated land [5].

If crops on soils moderately affected by salinity could be improved, the productivities of these lands would be multiplied. In this case, there is an urgent need to develop appropriate techniques for better crop production capacity in inefficiently cultivated or non-cultivated places. Various research aimed at developing technological approaches, consisting of modifying salty soil through reclamation measures or adopting biotic approaches through the use of salt-tolerant vegetable crops, is not an easy and economical step for sustainable agriculture [5][6].

The use of microbial technologies in agriculture is spreading very quickly by the identification of new bacterial strains effective in improving plant growth (PGPR, Plant Growth Promoting Rhizobacteria). Rhizospheric microorganisms, in general, exert various effects on plants, influencing their development [7][8][9][10][11]. They can also improve their competitiveness and their responses to external stressors. Thus, inoculation of stressed plants with PGPR strains attenuates salt stress [3]. As a result, the growth of halotolerant microorganisms associated with plant roots can lead to better fertility of saline soils [12]. Microorganisms present in the saline zone or in the rhizosphere of halophytic plants can be a valuable resource for improving the tolerance of crops to salinity [13]. PGPRs are a promising alternative to chemical fertilizers and pesticides. However, the ability of these bacteria to colonize the roots and survive in the soil is often limited. The selection and use of PGPRs should take into account the adaptation of the inoculant to a particular plant and ecosystem [14]. Developing effective measures for microbial inoculants remains a major scientific challenge. The application of the formulation for the development of new types of fertilizers is considered as one of the promising solutions to significantly boost global agricultural production in order to meet the growing food needs of the population. Encapsulation technology can be used as a versatile tool to protect these biofertilizers from desiccation, improving their shelf life and dispersal in fertilizer formulation and enabling the controlled release of microorganisms [15].

These particular biofertilizers are used not only to replace chemical fertilizers but, in addition, to overcome any limits associated with the contamination of the environment by toxic compounds generated by anthropogenic and industrial activities that have caused considerable damage to aquatic and terrestrial ecosystems. In addition to salinity, pollution has led to a significant loss of agricultural land [17]. Therefore, it is very important to develop a reliable, simple, and practical strategy for the screening of effective inoculants, and having broad-spectrum resistance against several environmental constraints. Stacking multiple desirable traits in a single inoculant could, therefore, be used successfully in future studies to mitigate the effects of various biotic and abiotic stresses on plant growth and productivity [18]. It is expected that this strategy will provide a new generation of PGPRs targeting highly stress resistant plants that thrive in harsh environments and will restore degraded lands.

The plant microbiome and knowledge about the dynamics and evolution of microbial communities associated with plants are currently a growing field. Studies on the composition and diversity of the microbiota of several plants of economic interest have shown that the association of bacteria with roots has important influences on plant health, productivity, and soil quality [19]. Colonization of the roots by bacteria has long been known, but now its importance for the growth and development of plants has become more attractive [20]. The bacteria associated with the roots of plants are then defined as rhizobacteria. In this zone, plants and microorganisms interact, where chemical communications and the exchange of compounds and nutrients occur [19]. In general, highly competitive and promoter bacteria are those that manage to survive and successfully colonize nutrient-rich roots. Rhizobacteria are typical heterotrophs, so they require organic compounds as a source of energy. Their needs are fully met within the rhizosphere itself. The abundance of bacteria in the soil is explained by their rapid multiplication and their ability to use a wide variety of substrates as sources of energy and nutrients [16]. These bacteria which, when applied to seeds, plant surfaces or soil, colonize the rhizosphere or the interior of plants and promote their growth. These PGPRs play a special role in increasing nutrient uptake, improving root and shoot formation, improving seed germination, and disease prevention and resistance of plants [20]. PGPRs can promote plant growth through various mechanisms.

PGPRs use different mechanisms to make certain nutrients available to plants. Nitrogen-fixing bacteria generally classified as symbiotic bacteria of legumes (e.g., Rhizobium) and non-legumes (e.g., Frankia), and non-symbiotic bacteria (free life, associative, and endophytes) convert atmospheric N2 into assimilable ammonia by plants using a complex enzyme system known as nitrogenase [21]. PGPRs also use mechanisms to solubilize phosphate (P) complexes [22]. The main mechanism used by bacteria for the solubilization of inorganic P is the production of mineral compounds such as hydroxyl ions, protons, carbon dioxide (CO2) and organic acids (including gluconic acid, acid α-ketobutyric acid, and 2-ketogluconic acid), which reduce the pH of the soil to release P. To mineralize organic P, PGPRs producing phosphatases (e.g., phytase, phosphonoacetate hydrolase, D-α-glycerophosphatase and C-P lyase) which stimulate the hydrolysis of phosphoric esters and convert organic P into the form available to plants [23]. Among PGPRs, Pseudomonas, Rhizobium, Enterobacter, Bacillus megaterium, B. circulans, B. subtilis, B. polymyxa, and Pantoea are the most potent solubilizers [24]. PGPRs are also able to solubilize insoluble potassium sources through the production and secretion of organic acids (oxalate, succinate, and citrate) in the rhizosphere. Therefore, these bacteria improve soil fertility and the bioavailability of potassium to plants [25]. Potassium solubilizing PGPRs such as Acidothiobacillus ferrooxidans, B. edaphicus, B. mucilaginosus, Burkholderia, Paenibacillus sp., and Pseudomonas have been reported [26].

Another important component, catalyzing many metabolic reactions in plants and necessary for production of phytohormones is zinc (Zn). Therefore, Zn deficiency severely affects various life processes in plants [23]. PGPRs solubilize Zn by producing different organic acids such as 2-ketogluconic acid and 5-ketogluconic acid for the mobilization of Zn. Other mechanisms possibly involved in the solubilization of zinc include the production of siderophores and protons [27].

PGPRs can secrete low molecular weight metal chelating compounds with high affinity called siderophore. The siderophore chelates iron and other metals from mineral phases through the formation of soluble siderophore–metal complex, which then binds to specific receptors on the bacterial cell surface for uptake an energy-dependent membrane transport mechanism, and to make it available to plants [16] (Figure 1). 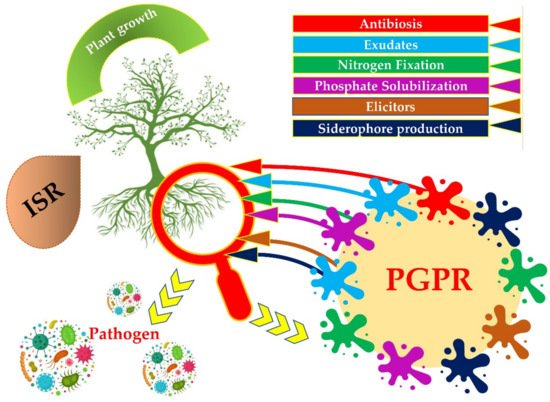 Phytohormones and plant growth regulators such as gibberellins, cytokinins, and auxins are organic substances, which, at low concentrations, promote plant growth and development [28]. The production of these phytohormones can be induced by certain PGPRs. Auxin is a phytohormone that directly or indirectly regulates most plant processes. It triggers a number of cellular functions ranging from vascular tissue differentiation, lateral root initiation, stimulation of cell division, stem and root elongation, and direction of stem growth in response to light [28][29]. Indole-3-acetic acid (IAA) is a common phytohormone belonging to the class of auxins and quantitatively the most produced by PGPRs. It plays an important role in the growth and development of plants because it induces the elongation and division of cells [30]. Cytokinin is a hormone derived from adenine involved in the regulation of various plant development processes such as plant cell division, disruption of dormant bud quiescence, activation of seed germination, growth roots, leaf expansion and retardation of senescence of many PGPRs including Azotobacter, Azospirillum, Rhizobium, Bacillus, and Pseudomonas spp. are producers of this hormone [31]. Gibberellins are a group of hormones that perform various functions in the plant organism. Gibberellins are the main regulators of the formation of reproductive organs and the ripening of viable fruits and seeds. They are synthesized by rhizospheric bacteria, including the genera Azospirillum, Bacillus, Pseudomonas, Rhizobium, Azotobacter, Arthrobacter, Agrobacterium, Clostridium, Flavobacterium, and Xanthomonas [32].

The production of one or more antibiotics is the most important mechanism of PGPRs, which facilitates antagonism against many phytopathogens There are several classes of antibiotics produced by PGPRs and related to the control of root diseases: 2,4 Diacetyl phloroglucinol, phenazine-1-carboxyclic acid, phenazine-1-carboxamide, pyoluteorin, pyrrolnitrin, etc.). Bacilli are among the most predominant microorganisms in soil and produce a significant number of different types of antibiotics [34][35][36]. PGPRs also produce metabolites contributing to antibiosis and to the control of phytopathogenic agents, used as defense systems involving the production of hydrolytic enzymes such as chitinases, glucanases, proteases, lipases, and cellulases. These enzymes digest or deform the fungal cell wall components of plant pathogens. In addition to enzymes, the siderophores produced by PGPRs are considered to be biological control agents since they prevent certain phytopathogens from acquiring a sufficient quantity of iron, thus limiting their ability to proliferate. Although, plant pathogenic fungi also synthesize siderophores, these generally have a lower affinity for iron compared to those produced by PGPRs. This feature is beneficial in the process of colonization and competition for the substrate in the rhizosphere [7][37]. HCN is a volatile antimicrobial compound produced by numerous species of rhizobacteria involved in broad-spectrum biological control of root diseases since they prevent the proliferation and development of pathogenic microorganisms [38]. Many bacterial genera such as Rhizobium, Pseudomonas, Alcaligenes, Bacillus, and Aeromonas have been shown to be producers of HCN. Volatile organic compounds (VOCs) are low molecular weight gaseous metabolic compounds. They play a useful role in the control of plant pathogens by inducing systemic resistance and stimulating plant growth [39]. Particular bacterial species of various genera, Pseudomonas, Arthrobacter, Stenotrophomonas, Serratia, and Bacillus species produce VOCs. PGPRs provide an alternative strategy to protect plants against disease via induced systemic resistance (ISR) [22]. This strategy is generally defined as the activation of latent defense mechanisms in plants prior to a pathogen attack. It is not specific against a particular pathogen, but it helps the plant to control many diseases [40]. This “immunity” is initiated as a result of the plant’s perception of so-called “elicitor” molecules produced by PGPRs. Thus, the transmission of the signal emitted following the perception of the infectious agent relies on different pathways in which salicylic acid, jasmonic acid, and ethylene play a crucial role [41]. However, these pathways interpenetrate and act with other mechanisms to form a modular regulatory network allowing the plant to initiate a specific defensive response depending on the nature of the pathogen, be it virus, bacteria, fungus, insect or nematode [38].

These beneficial effects of PGPRs are conditioned by their capacity for colonization and survival, which appear to be well established under normal conditions, but what about the application of these PGPRs under extreme conditions. The selection of PGPRs having the capacity for tolerance, growth promotion and protection of plants requires another selection strategy. In this case, the performance of these bacteria will be defined first in relation to their ability to adapt to especially saline stresses. Therefore, the new generation of PGPR should be sought in the rhizosphere of plants adapted to extreme saline and arid conditions. The exploitation of the microbiota of saline and arid soils will allow desalination and increase in cultivation on marginal surfaces thus meeting an ultimate objective.