Proteins and DNA exhibit key physical chemical properties that make them advantageous for building nanostructures with outstanding features. Both DNA and protein nanotechnology have growth notably and proved to be fertile disciplines. The combination of both types of nanotechnologies is helpful to overcome the individual weaknesses and limitations of each one, paving the way for the continuing diversification of structural nanotechnologies. Recent studies have implemented a synergistic combination of both biomolecules to assemble unique and sophisticate protein–DNA nanostructures. These hybrid nanostructures are highly programmable and display remarkable features that create new opportunities to build on the nanoscale.

In comparison to DNA, proteins display more complex, sophisticate, and diverse functions, as well as a larger structural diversity. These include, for example, highly specific catalytic activity, potent molecular recognition, tight and precise allosteric regulation, efficient cargo encapsulation, responsive structural functions, and cooperative binding. Since the early developments in structural DNA nanotechnology, these functionalities have been harnessed to increase the functionality of DNA nanomaterials. They provide advanced functionalities such as enhanced recognition for cellular ligands or enzymatic cascades. To achieve this, proteins are precisely positioned on a previously assembled DNA nanostructure (e.g., DNA origami or DNA junctions) (Figure 1a) [9][10][11][14][15]. Moreover, by adding functional capabilities to otherwise inert DNA nanostructures, proteins can cooperate synergistically and bring important features to the final assembled hybrid nanostructure (Figure 1a,b).

Figure 1. Overview of structural protein–DNA nanotechnology. (a) “Proteins for function” versus “proteins for structure” in DNA nanotechnology. In the latter case, there is much more synergy between the protein and the DNA building blocks. “R” means reactive and “P” product. (b) Structural roles of proteins in hybrid protein–DNA nanotechnology.
Two distinctive approaches to how proteins are combined with DNA can be clearly distinguished: (1) proteins for function and (2) proteins for structure (Figure 1a). The first represents “functional Protein DNA nanotechnology”, whereas the second “structural Protein-DNA nanotechnology”. This review focuses on the second approach, which we refer to in the review as “structural protein-DNA nanotechnology”. In this hybrid protein–DNA nanotechnology, proteins and DNA act synergistically during the self-assembly process and serve as the foundation for the final nanostructure. Meaning that protein and DNA nanotechnologies show a high degree of structural integration.
By advantageously harnessing the biophysical and chemical properties from both biomolecules [16], structural protein–DNA nanotechnology has reduced the limitations that each molecule present when used alone. Proteins have a larger chemical and structural diversity than DNA and, although proteins alone can build sophisticated nanostructures, their versatility and programmability are severely limited due to intricate sequence–structure relationships. On the other hand, DNA lacks the ample structural and chemical diversity seen in proteins but has more predictable folding than proteins due to the readily programmable Watson–Crick interactions. Since protein–DNA nanotechnology aims to harness the different but highly complementary physical–chemical and structural properties of both biomolecules, their synergistic combination offers strategical benefits for the fabrication of nanomaterials.
Structural protein–DNA nanotechnology is different from other common uses of proteins in DNA nanostructures because proteins play important structural, mechanical, and/or assembling roles. Although both DNA and proteins provide these roles, their degree of participation depends on the structural complexity of the starting and final structure. However, as it is shown below, most of the literature shows that the use of proteins is more operative than DNA. It is considered that proteins and DNA have structural roles in a particular protein–DNA nanostructure when it is not possible to achieve such a final nanostructure without the coparticipation of both building blocks (Figure 1a). Hence, the nonexistence of one building block does not lead to the acquisition of a particular shape, size, order, organization, or certain mechanical or dynamic properties. This means that the removal or the absence of one of them (protein or DNA) disassembles the structure or largely compromises its stability or properties.
As a result of their large structural and chemical diversity, proteins can bring multiple advantages when used for structural purposes (Figure 1b). They can spatially align DNA in specific geometries and preserve DNA topology by coating and stiffening. Furthermore, proteins can establish strong and specific interactions with ssDNA, and in particular, with DNA duplexes. This opens the opportunity to incorporate dsDNA into current DNA nanotechnology, which in turn relies on ssDNA (M13 virus plasmid and staple oligonucleotides) [17][18]. As proteins offer the advantage of working isothermally and at environmental temperatures, they can reduce the dependence on DNA molecules and multitemperature assembly processes of DNA nanotechnology. Therefore, proteins have a large potential to significantly reduce the production costs and simplify assembly processes, which currently limits the large-scale use of DNA nanotechnology in many applications.

In order to form nanostructures with DNA, proteins need to establish strong and effective interactions with DNA building blocks. Several types of proteins have been used in structural hybrid nanotechnology. These include enzymes, multimeric proteins, metal-binding proteins, coiled-coil peptides, cationic peptides, cationic polymer proteins, ribosomal proteins, transcription factors, viral proteins, nucleosomes, polymerases, and others (Table 1). These proteins interact with DNA through two different approaches: (1) covalent conjugation or (2) noncovalent coassembly (Figure 2). Covalent conjugation is usually performed by chemically linking proteins and DNA through reactive groups (Figure 2a). The DNA can be an assembled nanostructure or oligos with complementary sequences. Covalent conjugation is frequently used because it is straightforward, and it is easy to control and render (bio)chemically stable conjugates [13]. This strategy also means that practically any protein carrying the proper reactive group can be conjugated. On the other hand, noncovalent coassembly requires using proteins with DNA-binding capabilities (Figure 2b). Since noncovalent interactions are tunable and reversible, they offer the possibility to create flexible, modular, and highly dynamic hybrid nanostructures with advanced and complex functionalities that can mimic natural nucleoprotein complexes. However, the resultant complexes can have low stability and be more susceptible to the environmental conditions than chemically linked complexes; thus, the control of these types of interaction represents a great challenge.

In structural protein–DNA nanotechnology, proteins and DNA building blocks have been combined following a variety of strategies. The strategies reported until now include polymerization, directing and spatial organization, bending, folding, self-assembly, coating, rigidizing, and moving DNA parts (Figure 3). In these processes, DNA and proteins act synergically to build more complex structures. However, proteins generally have a more active role during the assembly than DNA. However, DNA plays an important role in the self-assembly of the final structure by operating as a structural template or scaffold for protein binding or anchoring. Below, it is discussed the aforementioned strategies. 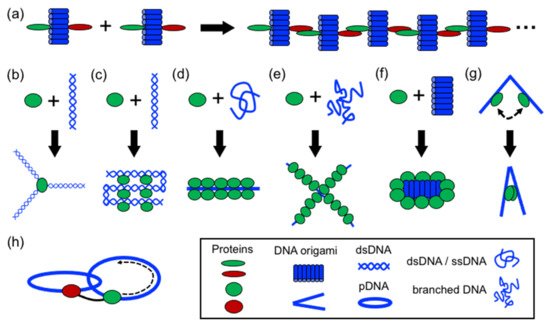 A large and diverse list of potential applications for this relatively new type of nanomaterial has been suggested. However, instead of demonstrating their applications, researchers put considerable effort into establishing basic rules and general guidelines for fabrication. Indeed, most applications of protein–DNA nanostructures are currently in the “proof-of-concept” stage of investigation. Another interesting point is that many researchers envision their hybrid nanostructures as versatile platforms for many different applications.
The most anticipated applications are in the fields of nanomedicine, synthetic biology, structural biology and biophysics, bioinspired nanomaterials, and nanorobotics. Within nanomedicine, the development of nanobiosensors for molecular imaging, as well as smart and responsive drug and gene delivery systems are being explored [43]. The latter is the most studied application [38][47][48]. The combination of sensing and drug delivery could lead to the creation of theragnostic hybrid materials [42]. Other applications of high relevance for nanomedicine are the creation of bioresponsive nanomaterials [24] and immunomaterials, such as multivalent vaccines. Potential applications inside structural biology and biophysics include the establishment of nanoplatforms for investigating the structure and assembly mechanisms of viruses [30][49] and controlling the architecture of genomic DNA and gene expression by looping DNA [17]. Protein–DNA nanostructures acting as scaffolds to attach multiple enzymes involved in the biosynthetic pathways [50] of high-value molecules are of particular interest in synthetic biology.
An area in which hybrid protein–DNA nanostructures have a particularly large potential is the mimicking of nucleoprotein complexes such as viruses, transcription factors, and ribosomes. Viromimetic hybrid materials have been developed into gene delivery systems and simple virus-like models for biophysical and structural studies [25][28][30][49]. With the development of dynamic protein–DNA nanostructures [37], it is possible to envision mimicking more complex structures such as ribosomes or motors for injecting DNA [35]. More advanced potential applications involve the fabrication of nanodevices, smart machines, and nanorobots. These molecular nanomachines could detect signals, localize target proteins, and control living cell function and fate [51]. Finally, nonbiological applications include the development of materials with catalytic properties, nanowires for nanoelectronics, and broader nature-inspired nanotechnology.