Plant mitochondria have large genomes to house a small number of key genes. Most mitochondria do not contain a whole genome. To maintain the mitochondrial genes, so important for energy production, the fusion and fission of mitochondria is critical. The dynamin related proteins DRP 3A and 3B drive the fission process. Fusion is less well understood but the MIRO2 gene appears to have a significant role. Massive mitochondrial fusion and subsequent fission prior to flowering, in the enlarging zygote and at germination aids genome repair, conservation of critical genes and may give an energy boost to key stages of the life cycle.

Mitochondria in flowering plants, which this review focuses on, are the sites of oxidative phosphorylation, producing most of the cellular adenosine triphosphate (ATP), central to providing the energy for plant life processes [1]. In addition, mitochondria are the sites of a complex metabolism and synthesise important compounds, including vitamins [2][3][4]. Plant mitochondria are mostly observed as small spherical ovoid organelles (Figure 1), 0.2–2.0 µm in diameter [5][6]. In the major plant model, Arabidopsis, a 0.8-µm sphere is considered a reasonable representation of an average mitochondrion, when estimating protein copy numbers per mitochondrion [6]. In a typical mesophyll cell, there can be 300–600 of these average mitochondria [7][8]. Mitochondria are, however, pleomorphic and dynamic organelles that have other morphologies that are important in understanding a number of aspects of mitochondrial cell biology and molecular genetics as they undergo fission and fusion [9]. Fusion can lead to long tubular mitochondria of 16 µm [7] or large tubuloreticular mitochondria [10] in certain cells and under certain conditions. 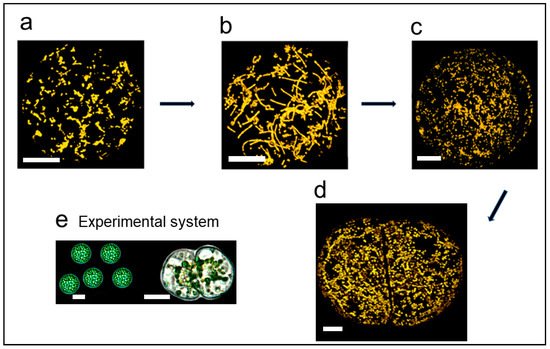 Figure 1. Mitochondrial fusion and fission prior to the first cell division in regenerating Nicotiana tabacum protoplasts. Visualised by GFP-expressing mitochondria. (a) Mitochondria in freshly isolated protoplasts are small ovoid organelles, showing some clumping. (b) Massive mitochondrial fusion forming highly elongated mitochondria. (c) After fusion, there is fission, generating large numbers of small mitochondria. (d) Uniformly dispersed mitochondria enable unbiased inheritance at cell division. (e) The experimental system. Dividing protoplast shows clustering of chloroplasts around the nucleus. Bars (a–d) 10 μm, Bars (e) = 20 μm. Figure 1 taken from [1] the Yale Journal of Biology and Medicine under Creative Commons Attribution-NonCommercial-ShareAlike 3.0.
Mitochondria contain DNA, which in Arabidopsis codes for 32 proteins, including critical proteins of the cytochrome electron transport chain, plus 3 rRNA and 22 tRNA genes [11][12]. However, nuclear DNA codes for the overwhelming majority of mitochondrial proteins. Isolated mitochondria from Arabidopsis cell suspension cultures contained 917 different protein species, when all contaminating proteins from other compartments were identified and eliminated [6]. All Angiosperms contain similar number of mitochondrial DNA (mtDNA) genes, but there is extensive variation in genome size. Most mitochondrial genomes in flowering plants range from 200 to 700 kb, but some can be up to 11 Mb [13], with most of the DNA being non-coding. This contrasts with mammalian mitochondria which range from 15 to 17 kb [13], with human mtDNA being 16.6 kb. Mitochondria do not form de novo and divide by fission to produce daughter mitochondria [14][15]. As mitochondria are semi-autonomous, with molecular evidence suggesting they were derived by endosymbiosis from an α-bacterium 1.5 billion years ago [16], it would be expected that there would be a regular transmission of DNA to daughter mitochondria. However, in a population of mitochondria, some contain less than a genome or even no DNA [8][9][17]. This problem can be overcome by fusion and subsequent fission [9][18]. Fission and fusion have been reviewed in Logan (2006) [19] and Arimura (2018) [20]. Fusion may involve mitochondrial pairs or may be massive, involving many mitochondria [21].

2.2. The Mechanism of Mitochondrial Fusion

3. Significance of the Mitochondrial Fusion/Fission Cycle

The fusion/fission cycle has meant that the mitochondria population in a cell should be thought of as a “discontinuous whole” [19]. What is the biological role of the mitochondrial fusion/fission cycle? The fusion/fission cycle has helped resolve one of the major historical problems of plant mitochondrial molecular genetics. It has been proposed for some time that plant mitochondria have variable amounts of DNA or no DNA at all [27] and this has subsequently been confirmed [8][17][28][29]. Fusion offers the opportunity for all mitochondria to gain access to mtDNA; tracking nucleoids provides evidence for this. Direct demonstration of fusion accompanied by nucleoid visualisation shows that mitochondrial fusion can decrease nucleoid heterogeneity, enabling most mitochondria to contain DNA [9][18]. Mitochondrial DNA is packaged into membrane-bound nucleoids, which are nucleoprotein structures readily visualised by the fluorochrome DAPI [12][18][30]. Even though it is possible to visualise nucleoids in most mitochondria after massive mitochondrial fusion [18], this does not necessarily mean all nucleoids contain a complete genome [17][29][31]. The mitochondrial genome can be very large [13] and is also multipartite, physically a mixture of linear, branched and fewer small circular forms [1][13][30][32]. However, the mtDNA maps to a large circular form using mapping and sequence assembly [13]. Fusion not only reduces mtDNA heterogeneity between mitochondria but allows mixing of the mitochondrial contents including mRNAs, proteins and metabolites. This mixing must be important as there are more mitochondria than there are copies of specific genes [8][33]. Different mitochondrial genes can have different copy numbers, consistent with the multipartite, subgenomic model [8][33], with not all subgenomic molecules being replicated to the same extent.

It has become clear that, as originally proposed by Lonsdale et al. [27], the total mtDNA of the cell must be considered as a single entity. It is the capacity for mitochondrial fusion that allows the mtDNA population to participate in recombination—it cannot be facilitated in a single punctate mitochondrion. The recombination allows for rapid structural evolution but suppresses base sequence evolution [13][27][34][35]. Homologous recombination is driven by high numbers of repeated sequences. It is fascinating that plant mtDNA with its complex genome has lower base substitution rates than cpDNA or plant nuclear DNAs as well as animal mtDNAs [34][35]. It has been suggested that this is due to the genome facilitating homologous recombination-dependent repair and mismatch repair [13]. Therefore, despite the diversity of the mtDNA with its subgenomes, the genotype is faithfully transmitted from one generation to the next. Nevertheless, the mtDNA is transmitted as nucleoids [13]; however, they do not necessarily contain a whole genome [17][29][31]. Therefore, MMF is an important consideration which is developed further in the MMF section below.

Mitochondrial DNA-encoded factors cause cytoplasmic male sterility (CMS), an important tool in the development of hybrid crops [36][37]. CMS commonly involves the transcription of open reading frames (orfs), which ultimately causes sterile pollen [36][37]. While this latter type of orf could derive from interspecific hybridisation and mtDNA rearrangements [37], following mitochondrial fusion, there are other types of CMS that can derive from interspecific somatic hybrids. One example is mitochondrial fusion and the development of feminised stamens (carpel-like); thus, there are no organs for pollen production [38]. The development of carpelloid stamens is associated with mtDNA recombination. The CMS phenomenon can clearly be linked to mitochondrial fusion, mtDNA recombination and mitochondria–nucleus compatibility. The inheritance of mitochondrial genotypes is generally maternally via the egg cell [39][40].

Jaipargas et al. [5] found that mitochondrial fusion was favoured under conditions of low energy status, such as darkness, low sugar and hypoxia, where increased energy levels are required. This raises the question of whether mitochondrial fusion or fission can be utilised to influence cellular metabolism. White et al. [24] suggest that fusion, promoted by ER tethering and low mitochondrial mobility, can be used as a device to support high energy demand. Possibly, increased mixing of mitochondrial contents optimises the capacity for ATP production.

Given that the total mtDNA of the cell must be considered as a single entity, this makes MMF or hyperfusion an important part of maintaining the integrity of the mitochondrial genome. This means that it provides an important opportunity for all the subgenomes to interact for recombination and DNA repair for the next generation. What is known currently is that MMF occurs in the SAM where flowering is initiated, in the zygote  and in germination, which are key points in the life cycle. This is not to say that the fusion/fission cycle involving few mitochondria is not unimportant in the cell cycle, cell development and the functioning of the cell. In these latter cases, the importance may be in DNA replication, and ensuring transcripts, proteins and metabolites are readily available for the maintenance of functional mitochondria and their genomes.

While the fusion/fission cycle is of key importance for maintaining mitochondria and their genome, there may be other roles for MMF. In plants, there is some evidence that fusion favours high energy demand and MMF occurs at times prior to the onset of major development shifts. MMF also occurs prior to the first cell division on the path to regeneration. If there is a connection between MMF and ATP production, there may be a role for manipulating mitochondrial fusion as an approach to modulating mitochondrial performance. In mammalian cells there is evidence that the hyperfused mitochondrial reticulum in the GI/S stage of the cell cycle produces more ATP than any other stage of the cell cycle.