Polymeric hydrogels (PolyHy) have been extensively explored for their applications in biomedicine as biosensors, in tissue engineering, diagnostic processes, and drug release. The physical and chemical properties of PolyHy indicate their potential use in regulating drug delivery.

Polymeric hydrogels can be classified based on different factors: 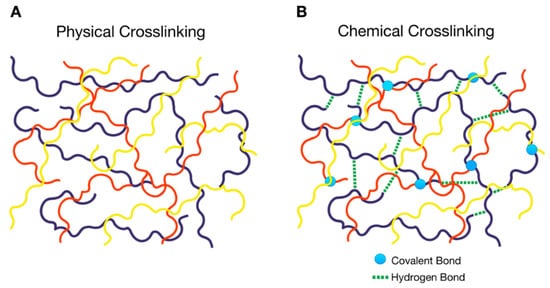 The hydrogels consisting of natural polymers have been recognized as prime candidates for designing tissue scaffolds. This is attributed to the excellent characteristics such as cost efficiency, high compatibility, and biodegradability exhibited by this type of hydrogels. Natural polymeric hydrogels, such as polysaccharides and proteins, were similar to the natural extracellular matrix. Thus, the hydrogels are endowed with magnificent properties, such as cellular proliferation and survival, to overcome certain challenges in tissue engineering [31][32][33]. Recently, a microbial polysaccharide-based macroporous hydrogel was manufactured from salecan and gellan gum by a one-step method [31]. These were obtained via the association of polysaccharide chains by means of Van der Waals forces, hydrogen bonds, and hydrophobic interactions. It should be noted that the manufacturing methodologies did not require crosslinkers or toxic monomers. Instead, the salecan/gellan gum hydrogel that exhibits excellent biocompatibility and properties to mimic the native tissues were utilized. In this context, cardiac tissue engineering has emerged as a branch of tissue engineering, which uses combinations of cells, biological and/or synthetic materials, growth factors, differentiation factors, proangiogenic factors, and monitoring, as a promising and challenging approach to induce the regeneration of heart tissue [34]. This field of research gave rise to the study of biocompatible hybrid systems [35], such as polysaccharide-based PolyHy, for application in tissue engineering [36][37].

Alginate (Alg) and chitosan (CS) are natural polysaccharides that are widely used in biomedicine, as well as food and pharmaceutical industries [38][39]. This is attributed to the high biocompatibility and biodegradability of polysaccharides [15][40]. A recent study on the improvement of the mechanical tensile strength of decellularized extracellular cardiac matrix (ECM) using Alg/CS hydrogels [41] showed a high swelling capacity, good mechanical resistance, moderate biodegradable properties, and excellent cell viability. The results of the study reveal that CS- and Alg-based platforms find potential applications in cardiac tissue engineering. In addition, other natural polymers, such as collagen, gelatin (Gel), and fibrin, have been studied for myocardial tissue engineering. The collagen/CS composite scaffold has been widely used for myocardial tissue engineering [36]. Since collagen, which is the main component of the ECM within the myocardium, has a fast degradation rate and poor mechanical properties [42][43], it has been combined with other polysaccharides to improve the characteristics of the composite PolyHy.

The research in tissue engineering aims to manufacture materials that mimic native tissues of the human organs. The biomimetic materials capable of mimicking the structure and composition of the native extracellular matrices are essential for successful organ tissue repair and transplantation in humans. Similarly, fibrin-agarose tissue-like hydrogels (FATLHs) have allowed successful biofabrication of different biological substitutes, and thus, delivered promising ex vivo and in vivo results [44]. These fibrin-agarose-based materials biodegrade and integrate into implanted areas and vital organs without any histopathological alteration. Thus, FATLHs exhibit potential clinical uses in engineering applications due to their biosecurity and biocompatibility. Furthermore, these artificial tissues combine to be stronger, and thus offer a stable mechanical response along with favorable cytocompatibility [45].