Perilipins are a family of five closely related proteins expressed on the surface of lipid droplets (LD) in several tissues acting in several pathways involved in lipid metabolism. Recent studies have shown that Plin5 depletion acts protectively in the pathogenesis of liver injury underpinning the importance of pathways associated with PLIN5. PLIN5 expression is involved in pro-inflammatory cytokine regulation and mitochondrial damage, as well as endoplasmic reticulum (ER) stress, making it critical target of the NAFLD-HCC studies.

Lipid accumulation in the liver plays a pivotal role in the pathogenesis of NAFLD that might result from dysfunction of cellular lipid trafficking and lipid droplet formation. The accepted model of LD formation is based on the biosynthesis of neutral lipids (e.g., triacylglycerides, TAGs) by esterification of fatty acids (FA) into diacylglycerol or sterols [1][2] Figure 1. 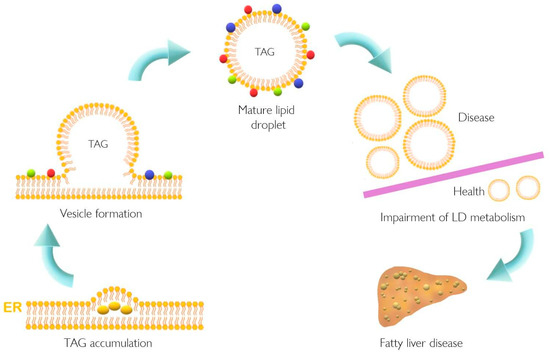 NAFLD is characterized by augmented accumulation of hepatic LD, which is in line with increased PLIN5 expression [3]. Recently, alterations in lipid metabolism have also been proposed as a new hallmark of cancer [4][5][6]. Moreover, several cellular processes such as oxidative stress, ER stress, and inflammation have been related to non-alcoholic steatohepatitis (NASH) the progressed form of NAFLD [7][8] as well as to cancer development and progression [9][10]. Meanwhile, PLIN5 has indeed been implicated in the regulation of lipid and glucose homeostasis and many cellular processes such as oxidative stress, ER stress, inflammation, and autophagy [3][11][12][13][14][15][16][17][18][19][20][21]. This evidence once again supports the notion that PLIN5 could play a direct role in transition from NAFLD to HCC.

In one study, PLIN5 was named myocardial LD protein (MLDP) due to its cardial expression [22]. The other two groups reported the expression of PLIN5 in oxidative tissues-enriched PAT protein (OXPAT) and lipid storage droplet protein 5 (LSDP5), a protein not exclusively expressed in the heart, but highly expressed in oxidative tissues, such as muscle and liver [23][24]. Peroxisome proliferator-activated receptor (PPAR) was shown to regulate the transcription of Plin5 since the first intron of the gene contains a PPAR regulatory element (PPRE) [23]. All three groups showed that Plin5 is induced in the liver under fasting conditions in a PPARα-dependent fashion [23][22][24].

Different enzymes, such as adipose triglyceride lipase (ATGL), hormone-sensitive lipase (HSL), and monoglyceride lipase (MGL) regulate lipid hydrolysis. TAG hydrolysis is catalyzed by ATGL, followed by cleavage of one molecule of FA forming diaglycerides by HSL and finally hydrolysis is completed by MGL [1]. The interaction between PLIN5 and ATGL and its protein activator, α-β-hydrolase domain-containing 5 (ABHD5), results in decreased lipolysis [25][26]. In this scenario, different lipid droplet proteins play a key role in regulating lipid metabolism and TAG storage in cells.

3. The Role of PLIN5 in Lipid Metabolism and NAFLD

One of the first studies to elucidate the role of PLIN5 in hepatocytes demonstrated that PLIN5 expression is induced by FFA in a time-independent manner [27]. Additionally, a study performed in Plin5-deficient mouse hepatocyte AML-12 cells showed a decrease in cellular TAG content as well as an increase of mitochondrial oxidation [28]. To gain a better understanding of consequences resulting from Plin5 depletion in vivo, several knockout (KO) models in mice have been developed. Table 1 contains key points of the major models reported as well as the feeding conditions evaluated in each of these, underpinning the notion that the role of PLIN5 in metabolism seems to be tissue-specific.

4. PLIN5 Is Responsive to Cellular Processes Altered in NAFLD

NAFLD is a condition characterized of dyslipidemia, increased oxidative stress, ROS production, and mitochondrial alterations provoking inflammatory responses [8]. There are several reports analyzing how PLIN5 participates in each of these processes. In one study, the depletion of Plin5 in an in vivo mouse model under fasting conditions was associated with decreased LD formation and TAG content in the heart [29]. The same effect was observed in soleus muscle, BAT, and WAT.

PLIN5 showed implications in the inflammatory response in different models, and strikingly, LCN2, a well-known acute pro-inflammatory protein and critical regulator of lipid uptake, has been shown to act as a regulator of PLIN5 activity in a NASH model based in a methionine- and choline-deficient diet [33]. This report supports that LCN2 impacts PLIN5 expression in a PPAR-independent manner, since its stimulation with an PPAR-γ agonist failed to suppress its expression [33].

Furthermore, studies on Plin5−/− mice have revealed a close local connection of mitochondria and LDs [18][34]. In the respective model, the oxidative capacity of mitochondria in cardiac muscle was impaired due to changes in lipid composition of the membrane and its polarization [34]. Super-resolution microscopy-based approaches in skeletal muscle have shown that under basal conditions there are three pools of PLIN5, namely in the cytosol, in close proximity of mitochondria, and surrounding LDs in the mitochondria–LD interface [35]. Moreover, it was observed that increased FA levels led to an augment of PLIN5 in the mitochondria–LD interface pool, suggesting that this relocation dynamic of PLIN5 might facilitate flux of FA from LDs to mitochondria [35][36]. All these data demonstrate the fine-tuned regulation of PLIN5 in lipotoxicity, inflammation response, and mitochondrial dynamics, processes that are all closely related in the development of NAFLD. The major biological processes in which PLIN5 participates are illustrated in Figure 2. 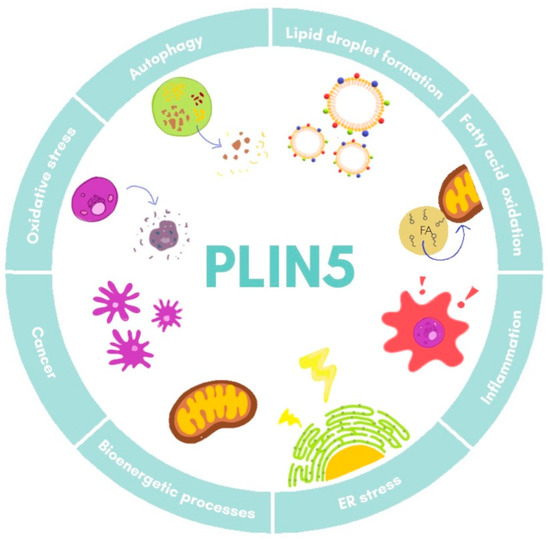 Figure 2. Cellular functions of PLIN5. Major processes in which PLIN5 has been reported to participate are shown. ER, endoplasmic reticulum.

5. Perilipins in Cancer: The Unrevealed Role of PLIN5

Information contained in the Human Protein Atlas indicates PLIN5 level alterations in some types of cancer (http://www.proteinatlas.org/, last accessed 24 March 2021). A first study about participation of perilipins in neoplastic steatogenesis was reported by Straub and colleagues. They suggested that PLIN1, PLIN2, and PLIN3 may be involved in cancers such as hepatocellular adenoma and carcinoma, sebaceous adenoma and carcinoma, and lipoma tumors, while PLIN5 was excluded as not sufficient proof was given [37].

Little is understood so far about how PLIN5 is involved in the development or progress of cancer, but a novel transcriptome analysis of lung cancer, predicted that higher expression of the guanine nucleotide-binding protein α-inhibiting activity polypeptide 3 (GNAI3) and the lncRNA AC087521.1 was associated with a short survival time, while the NHL repeat-containing protein 2 (NHLRC2) and PLIN5 correlated with longer survival times [38].

Information about PLIN5 implication in HCC is still limited. It was first shown in 2019 that PLIN5 expression is upregulated in HCC tumoral areas in murine HCC models and human HCC biopsy specimens as assessed by Western blot analysis and quantitative real time PCR [39]. RNA-seq and splicing factor (SF) data of 390 HCC cases deposited in the Cancer Genome Atlas (TCGA) data portal (https://tcgadata.nci.nih.gov/tcga/, last accessed 24 March 2021) indicate that PLIN5-46808-AT was found more common in primary sites of HCC with metastasis than primary HCC [40]. It is evident that more studies elucidating HCC development are necessary to clarify the actual function of PLIN5 in HCC.