Antimicrobial peptides (AMP) are small cationic and amphipathic molecules that play a vital role in the host immune system by acting as a first barrier against invading pathogens. The broad spectrum of properties that peptides possess make them one of the best possible alternatives for a new “post-antibiotic” era.

1. Antimicrobial Peptides as a New Tool to Tackle Antibiotic-Resistant Infections

Antimicrobial peptides (AMP, also known as host defense peptides) are essential components of the innate immune system and possess broad-spectrum activities such as antimicrobial, wound-healing, immunomodulatory and antibiofilm. They have shown to be promising drug candidates for the treatment of microbial infections, either as a monotherapy or in conjugation with other pre-existing drugs [1][2][3][4].

Several models have been proposed to describe the pathways through which AMP exert their antimicrobial action [5] and it is well known that AMP can act through different mechanisms (Figure 1). This has a major impact on their high efficacy and the broad spectrum of activity, including Gram-positive and Gram-negative bacteria, but also fungi, viruses, unicellular protozoa, and cancer cells [6]. For instance, AMP can disrupt the membrane through pore and micelles formation, binding with specific receptors or through electroporation. Moreover, they can induce cell death through interaction with internal cellular components, hijacking important processes vital to the pathogens. They can also interfere with the cell wall through inhibition of its biosynthesis. Lastly, they are capable of exerting antimicrobial activity without ever interacting with the pathogens, through modulation of the innate immune system [5][6][7][8][9]. Remarkably, the paradigm of how peptides act is in constant change. It is now clear that several peptides are capable of exerting activity through various mechanisms. Importantly, this may hinder the development of anti-AMP resistance. 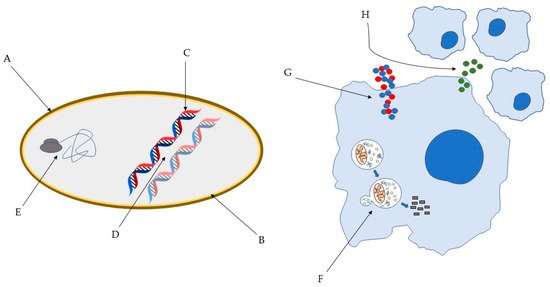 Cathelicidins are a family of mammalian AMP with approximately 30 identified members. However, in humans, rhesus monkeys, rats, mice, and guinea pigs, only a single cathelicidin is expressed, named LL-37, RL-37, rCRAMP, mCRAMP, and CAP11, respectively in each species. The peptide is produced in different cells, most notably in neutrophils, in response to an infection [12].

Defensins are small cationic peptides with broad-spectrum activity against bacteria, viruses, and fungi, predominantly expressed in epithelial cells and neutrophils. They inhibit bacterial growth through various mechanisms, depending on the defensin itself and its target. Nonetheless, direct cell membrane disruption and targeting of DNA are two pathways commonly observed. They also exert antibacterial activities through neutralization of secreted toxins and are responsible for chemotaxis [13][14][15].

The protegrins family is composed of five native AMP sequences identified in porcine leukocytes (PG-1 to PG-5) [16]. These cationic peptides are 16 to 18 amino acids long, and adopt amphipathic β-sheet structure [17][18]. Against axenically growing Mtb H37Rv, PG-1 displayed a 68.4% CFU reduction at 64 μg/mL and 96.7% 128 μg/mL, whereas against an MDR strain a significant decrease is only achieved at 128 μg/mL (Table 1). Nonetheless, the peptide displayed a synergistic effect when administered alongside isoniazid [19].

Hepcidin is an AMP involved in iron homeostasis. Iron is extremely important for all living organisms, including bacteria, participating in major biological processes such as gene regulation and DNA biosynthesis [20]. It is also required to produce superoxide dismutase which protects them from the hosts’ oxygen radicals [21].

Lactoferrin (LF) is an 80 kDa iron-binding glycoprotein present in various mammalian secretions, such as saliva, tears, and milk. Its affinity for iron is 300 times higher than serum transferrin [22]. Possessing a wide array of physiological functions such as antimicrobial and immunomodulatory, it plays a significant role in the innate immune system, being associated with host defence against oral pathogens, given its presence in saliva. Several peptides with antimicrobial activities are produced by the action of proteases on LF [23].

Ubiquitin is a protein that regulates proteasomal degradation, marking its target proteins to be destroyed in the 26S proteasome [24]. Moreover, ubiquitin is responsible for regulating the trafficking of proteins in the endocytic pathway [25]. During an infection, the fusion of the phagosome with the lysosome facilitates the killing of the invading pathogen through both oxidative and non-oxidative mechanisms. Ubiquitin-derived peptides are the primary mediators of those non-oxidative mechanisms [26]. Ubiquitin itself has no antimycobacterial activity in lysosomal extracts. However, some of its derived peptides produced by proteolytic degradation of ubiquitin, namely Ub2, are active [27].

Hcl2 is a fragment of the human mitochondrial protein COX3. It was reported to strongly bind ESAT-6 [28], a protein secreted by Mtb that plays a key role in the mycobacterial pathogenesis, by suppressing the antigen presentation of macrophages [29].

Cathepsin G (catG) is a neutrophil serine protease (NSP) with antimicrobial properties. Stored within the acidic granules, NSP become active only after being released into the phagocytic vacuole. Furthermore, they are also components of neutrophil extracellular traps—extracellular fibrillary structures released by neutrophils. These traps are composed of NSP alongside chromatin and facilitate pathogen arrest [30][31].

Natural toxins can be used therapeutically against several diseases, due to their high specificity for certain cellular components. Scorpion venom has been studied as a source of those toxins, as it is a mixture of polypeptides, nucleotides, mucoproteins among other substances [32]. Their AMP share relevant characteristics with the ones we are typically familiar with, such as the presence of hydrophobic and cationic residues, a positive net charge, and the ability to adopt an amphipathic structure [33].

B1CTcu5 is a 21-amino acids long AMP that belongs to the Brevinin-1 family, sharing a very similar sequence to its parental peptide. Brevinins are known for their antimicrobial activities against Gram-positive and Gram-negative bacteria. This cationic peptide was isolated from the skin secretion of the frog Clinotarsus curtipes [34][35]. Against planktonic cultures of Mtb H37Rv this peptide was bactericidal, presenting a MIC of 12.5 μg/mL. Moreover, at its MIC, the peptide was capable of completely inhibiting Mtb growing inside THP1-derived macrophages. Furthermore, it was deemed as non-toxic against this cell line, proving to be a potential anti-tubercular lead [35].

Nisin A and lacticin 3147 are two of the best characterized lantibiotics. Ribosomally synthesized peptides produced by the Gram-positive bacteria Lactococcus lactis, lantibiotics have had their use well-documented in food, animal, and human applications [36]. Mutacin 1140, typically known as MU1140, is derived from Streptococcus mutans JH1140, has 22 amino acids and presents low levels of toxicity, a high degree of stability, and good pharmacokinetics [37][38]. Lasso peptides are a subclass of ribosomally synthesized and post-translationally modified peptides characterized by a stable structure. With a broad spectrum of bioactivity, lasso peptides have been associated with antimicrobial action, including relevant anti-tubercular efficacy [39]. Streptomyces has been a bacterial source of peptides with antimycobacterial properties [40]. Most importantly, these bacteria are the source of streptomycin, the first approved antibiotic used to treat tuberculosis [41].

Fungal defensins are potent AMP with low toxicity and high serum stability. Through the method of residue substitution, several variants of plecstasin were generated such as NZX, with reported anti-tubercular activities and high resistance to proteases’ action [42]. Trichoderin A, the peptide with the highest efficacy, was found to exert this potent antimycobacterial activity through inhibition of the mycobacterial ATP synthesis [43].

Capsicum plants, specifically, have been considered as a possible research target in the search for new proteins and peptides that help defend plants against invading pathogens, given their already described antibacterial compounds [44][45].

4. Taking AMPs from Bench to the Clinic

However, despite their remarkable properties, AMPs still face major challenges to join the pharmaceutical industry. The primary challenge is the susceptibility to proteolytic enzymes. When administered orally, AMP must overcome enzymes that operate through the digestive tract, like pepsin, trypsin, and chymotrypsin. Intravenous administration poses similar challenges, as there are many proteases in blood [46]. Moreover, intravenous administration translates into a shorter half-life due to hepatic and renal clearances [47]. New design strategies have been applied to overcome these challenges, with the incorporation of non-natural amino acids, backbone mimetics, conjugation with fatty acids, and N and C-terminus modifications [48]. Furthermore, drug delivery systems, using different types of vehicles such as nanoparticles, liposomes, or different gel formulations, have also been a strategy employed to reduce proteolytic degradation [49].