Antimicrobial photodynamic therapy (APDT) is constantly evolving and can minimize this antimicrobial resistance problem. Reactive oxygen species produced when nontoxic photosensitizers are exposed to light are the main functional components of APDT responsible for microbial destruction; therefore, APDT has a broad spectrum of target pathogens, such as bacteria, fungi, and viruses. Various photosensitizers, including natural extracts, compounds, and their synthetic derivatives, are being investigated. Light, oxygen, and PSs in precise cooperation are the key factors determining APDT efficiency and are responsible for ROS production and the inactivation of the targeted cells.

After penicillin was identified as a product of Penicillium notatum by Alexander Fleming in 1928, its widespread consumption was noted in the early 1940s. In 1944, 50% of the clinical isolates of Staphylococci sp. were unexpectedly shown to exhibit resistance to penicillin [1]. Extensive antibiotic (mis)use has led to the spread of more resistant bacteria to the environment, and antimicrobial resistance (AMR) is an increasing threat to humans. By 2050, 10 million deaths per year are expected to be related to AMR [2]. Antibiotic-resistant pathogens are emerging threats to human life and are classified as methicillin-resistant Staphylococcus aureus (MRSA), vancomycin-resistant Enterococcus faecalis, multidrug-resistant mycobacteria, Gram-negative pathogens, and fungi [1].
Antibiotic resistance and antibiotic pollution are common problems worldwide. Antibiotic resistance in infections potentially results in sepsis and even ineluctable systemic inflammation and organ failure [3]. Medicine is not the only source of antibiotic resistance. Aquaculture production, livestock, and pets consume and waste a high rate of antibiotics. Some probiotics and plant extracts containing essential oils have been introduced as alternative treatments to overcome excess antibiotic usage in aquaculture [4]. Notably, every use of antibiotics can create selective pressure for mutation and the development of drug resistance [5]. Overuse or misuse of antibiotics can increase the rate of AMR. Some country-based strategies have been implemented to overcome AMR. Additionally, in 2014, the World Health Organization (WHO) published a global report on AMR [6].
Antimicrobial photodynamic therapy (APDT) is a challenging method to overcome excess antibiotic consumption and limit antibiotic resistance gene transfer. Quorum sensing, vaccines, lectin inhibition, and iron chelation have been used as treatments for drug-resistant microorganisms, and APDT might be considered a favorable technique among them. The photodynamic effect was first described by Oscar Raab in 1904 and first successfully used to treat cancer cells in 1905 [7]. By the time PDT focused on cancer cell treatment, APDT was focused on overcoming antibiotic resistance by targeting bacteria, algae, yeasts, and viruses [8].
In addition to combating AMR and excess antibiotic consumption, APDT can provide strong antibiotic potency. APDT inhibits a broad spectrum of pathogens because its antimicrobial activity originates from reactive oxygen species (ROS) production induced by a unique photochemical reaction. Viera et al. [9] studied APDT efficiency against a broad range of organisms, including bacteria, fungi, and viruses, and reported that APDT is effective against a wide range of organisms. Tissue specificity is another advantage of APDT. Generally, no toxicity is observed in nonphotosensitizer-treated cells or in cells that are not exposed to light. Photosensitizers (PSs) are known to be taken up predominantly by target cells rather than nontarget cells. Only the infected tissue is irradiated, and the PS in unirradiated locations is pharmacodynamically passive. In addition, Park et al. [10] reported that APDT can be used effectively without damaging resident flora or human tissue.

Light, oxygen, and PSs in precise cooperation are the key factors determining APDT efficiency and are responsible for ROS production and the inactivation of the targeted cells [11].

Photobiomodulation has been applied to relieve pain, decrease inflammation, and stimulate the healing of living tissues [12]. Light sources significantly affect PDT. Sunlight with diverse wavelengths activates the PS and causes shallow tissue penetration, thermal effects, and difficulties in controlling the dose [13]. Xenon lamps, light emitting diodes (LEDs), laser beams, and fiber optic devices are alternatives to sunlight and can overcome many problems associated with sunlight exposure. A xenon lamp illuminates a wide range, while a laser beam illuminates a narrow area. Near-infrared (NIR) (700–810 nm), red (600–700 nm), yellow (550–600 nm), green (490–550 nm), blue (400–490 nm), and ultraviolet A (UVA) (330–400 nm) light have been applied for APDT [14]. A broad range of light has been used for APDT; however, longer wavelengths are preferred because of the deeper tissue penetration [15].
LEDs have become attractive light sources because they are easy to operate, safe, and inexpensive. Moreover, some innovative methods have been developed as alternatives to classic light sources. For example, wearable light-emitting fabrics facilitate the delivery of total light over a much longer time with a much lower power density, overcoming the problem of depletion of the available oxygen supply by decreasing the oxygen consumption rate [14]. The sufficient intensity of light for antibacterial photosensitization ranges from 5–1000 W/m2, as higher light intensities potentially result in thermal problems. The exposure time varies from seconds to minutes, depending on the light intensity [16].

PSs and light irradiation are the main mechanisms of photodynamic therapy (PDT), and the ROS generated and the singlet oxygen (1O2) converted from molecular oxygen by PSs are responsible for bacterial damage. Singlet oxygen damages organelles and causes programmed cell death in human cells [17].
Molecular oxygen (O2), a nonpolar small molecule that diffuses across biological membranes, is used by aerobic organisms for oxidation and respiration. After O2 passes through the membranes, oxidative phosphorylation and adenosine triphosphate generation occur, and oxygen is reduced to produce energy. Respiratory flavoenzymes are the main catalytic redox cofactors that participate directly in ROS formation by transferring ē to O2 to produce superoxide (O2●−) and H2O2. Afterwards, a Fenton reaction, in which H2O2 is oxidized with the available ferrous iron (Fe2+) to generate OH●, occurs [18]. Sodium azide (NaN3) and histidine are 1O2 quenchers, and thiourea and dimethyl sulfoxide are free radical scavengers that have been used in photodynamic inactivation therapies [19].
Singlet oxygen (1O2) is an extremely short-lived and reactive form of oxygen that is involved in photochemical reduction processes. In type I reactions, electrons are stripped from biological macromolecules and •OH is transformed into hydroxide ions [1]. Superoxide dismutase (SOD) converts O•− into HO and O, and H2O2 participates in the Fenton reaction, resulting in the homolytic fission of the oxygen–oxygen bond in H2O2 to yield a hydroxide ion [1]. In type II reactions, 1O2 interacts with double bonds, sulfur moieties, and aromatic components of macromolecules in Diels–Alder cycloadditions [1]. Type I and type II reactions involving natural PSs are illustrated in Figure 1, and each step is explained below. 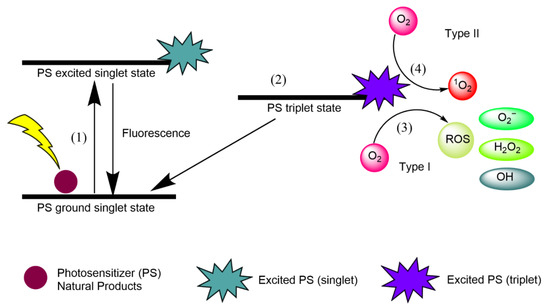 (1)
Natural product PSs are converted from the ground singlet state into the excited singlet state when exposed to a specific wavelength of light.
(2)
If the PS in the excited singlet state does not return to the initial ground state, it can be subjected to intersystem crossing into the triplet excited state.
(3)
A type I reaction comprises transferring a hydrogen atom from PS to an organic molecule to form radicals, and the reduced PS interacts with oxygen through a redox reaction, forming ROS and a superoxide anion radical (O2•−) [20].
(4)
The type II reaction comprises direct energy transfer from the activated PS to molecular oxygen to form singlet oxygen (1O2) and is simpler than the type I reaction.