Crystal-storing histiocytosis (CSH) is a rare event in disorders associated with monoclonal gammopathy and is mostly associated with the accumulation of immunoglobulins (Igs) in the cytoplasm of histiocytes.

Crystal-storing histiocytosis (CSH) is a rare disorder characterized by the accumulation of crystallized deposits in the cytoplasm of histiocytes. The entity has been associated with underlying lymphoproliferative or plasma cell disorders, such as monoclonal gammopathy of undetermined significance (MGUS), multiple myeloma (MM), or lymphoplasmacytic lymphoma (LPL) [1][2][3]. The histiocytes in CSH contain crystallized material, although there have been reported cases of immunoglobulin-storing histiocytosis (IgSH) without a crystallized pattern of the deposited immunoglobulins [4][5]. IgSH can present in both a localized and a generalized form and may include a wide range of tissue sites and organs [1][2]. Herein, we present a patient with increasing back pain after a minor injury. She was diagnosed with a localized form of non-crystallized IgSH. We discuss the clinical findings, diagnostic workup, and therapeutic options. Furthermore, we performed a systematic review of the literature regarding IgSH and summarized the findings in this rare disease entity.

A 75-year-old woman presented with acute pain in the lower back after a trivial incident. Her past medical history included hypertension, hypercholesterolemia, type 2 diabetes mellitus, hypothyroidism, migraine, and arrhythmia. Initial radiological examinations demonstrated no fracture. However, over the next few weeks, her back pain increased. By magnetic resonance imaging (MRI), she was diagnosed with a compression fracture in L1, although with no spinal stenosis (Figure 1). The fracture was initially managed conservatively; however, she had persistent opioid-dependent lower back pain and was admitted to the orthopedic department for further clinical and laboratory diagnostic workup to exclude a pathologic etiology for her fracture. 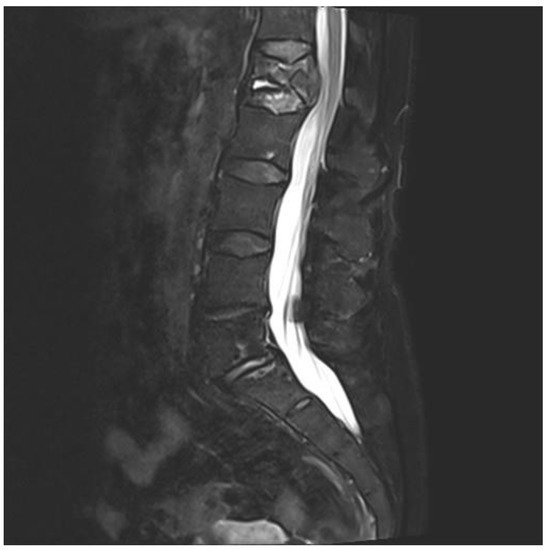 Figure 1. Magnetic resonance imaging (MRI) of lumbar column. The figure demonstrating collapse and fracture of vertebra corpus L1, with edema and compression against the spinal cord.
When blood tests revealed anemia, elevated sedimentation rate (SR), and a monoclonal (M)-protein by serum electrophoresis (Table 1), she was transferred to the hematology unit, as MM or other plasma cell dyscrasia was suspected. A bone marrow aspirate was performed and demonstrated a slightly hypocellular bone marrow with megakaryocytes present. There was normal maturation in the erythrocytopoiesis and the granulocytopoiesis, without expansion of lymphoid cells. The plasma cells accounted for 4% of nucleated marrow cells. Furthermore, whole-body low dose computed tomography (CT) for assessment of osteolytic lesion as part of MM was performed without detecting other lesions. Hence, the patient did not fulfill the diagnostic criteria for MM. However, based on the findings of monoclonal gammopathy by serum electrophoresis and the absence of findings supporting MM, she was diagnosed with MGUS. For further diagnostic workup, a CT-guided biopsy of the lesion in L1 was performed.
Table 1. Diagnostic blood test from the patients.
The bone biopsy showed only sparse monoclonal plasma cells, but vast amounts of deposits intracellularly stored in histiocytes, inconsistent with amyloid (Figure 2). In immunohistochemical staining for light chains, the deposits were somewhat stronger positive for kappa than for lambda. In additional stains, IgG was colocalized with kappa and CD68, making it probable that the deposits consisted of whole immunoglobulins. By electron microscopic examination, there was abundant bright, predominantly amorphous material, but also some tubular structures with a diameter between 25–30 nm. No relation to cell organs was seen. Additionally, small amounts of electron-dense amorphous material were found. Attempts with mass spectrometry gave no conclusive results. 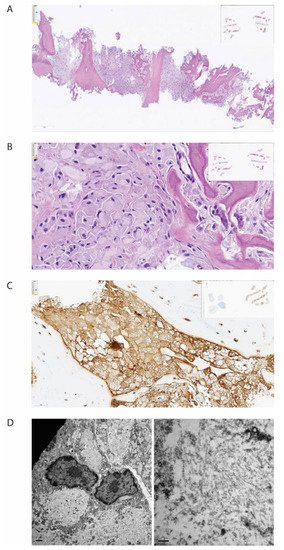 Figure 2. Histopathological examination of biopsy from corpus vertebrae. The figure demonstrates the biopsy from the patient’s corpus vertebrae L1. (A) Hematoxylin-eosin stain in low magnification demonstrating bone repair and bone marrow with the absence of organized hematopoiesis and maximal infiltration by histiocytes. (B) Hematoxylin-eosin stain in higher magnification demonstrating histiocytes with intracellular amorphous material. (C) Immunohistochemical staining for kappa light chain, demonstrating positivity in the histiocytes (brown color). (D) Electron microscopy, low magnification, showing bright intracellular material (left) and high magnification, showing no fibrils but spread tiny tubules (right).
After clinical, radiological, histopathological, and biochemical examination, it was concluded that the patient had MGUS with secondary IgSH, without any other underlying malignant disease. The patient had no sure sign of CRAB-criteria associated with MM: hypercalcemia, renal failure, anemia with Hb < 10 g/dL, or osteolytic bone disease. The patient, on the other hand, had persistent pain and difficulty moving, and she was, therefore, accepted for surgical intervention with vertebroplasty. She was operated on with the insertion of pedicle screws in vertebra corpora Th12 and L2, followed by repositioning of the fracture in L1 and the insertion of cement in the corpora with access via the pedicles bilaterally. The peri- and postoperative courses were without complications. The patient had striking relief of pain after surgery; she was no longer dependent on analgesics and could resume normal daily life activities. The current follow-up by the back surgeon and hematologist for her MGUS does not show signs of disease progression.

We performed a systematic PubMed search with the term “Storing Histiocytosis” in the title and identified 107 relevant published articles from 1987 to July 2020. The term “Storing Histiocytosis” was used to include both CSH and IgSH. Only cases with sufficient information written in English were included, and six articles were thereby rejected. From 101 articles, we identified 140 cases of assumed IgSH (Table 2). Other data collected were the type of material deposited within histiocytes, age, gender, involved sites, type of immunoglobulin if available, and the presence or not of an underlying lymphoproliferative disease or plasma cell dyscrasia.

The median age at diagnosis was 60.5 years for both sexes (age-range women 18–91, age-range men 32–86), and there was a nearly equal sex distribution with 71 men (51%) and 69 women (49%) (Table 2). The age and gender distribution are presented in Figure 3. Cases were divided into two subgroups: localized and generalized, as proposed by Dogan et al. in 2012 [6]. Cases with only one involved site were characterized as localized (77%), while cases with two or more involved sites were classified as generalized (23%) (Table 2).

Figure 3. Age and gender distribution. The figure displays the incidence of storing histiocytosis in different decades. The median age at diagnosis was 60.5 years for both sexes (range 18–91, and slightly more cases were identified amongst men with 71 men (51%), compared to 69 women (49%).
Table 2. Demographic and pathological data from identified cases.

IgSH can be found in a wide range of organs/tissues. The most frequently involved organ systems and tissue sites included bone, head and neck, kidney, lung, gastrointestinal mucosa, and lymph node. The organ and tissue site involvement in the identified cases is presented in Figure 4. 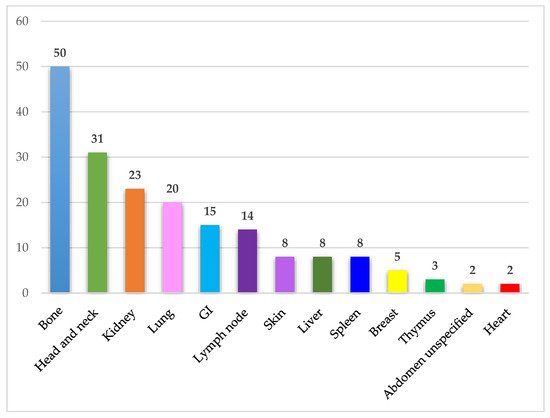 Immunoglobulin classes were collected in this literature review and are presented in Figure 5. The information regarding the specific immunoglobulin and light chain present in the serum was not always available or specified. The most common immunoglobulin found by serum protein electrophoresis and immunofixation was IgG identified in 39 cases, while IgM and IgA were identified in 20 and 12 cases, respectively. The presence of light chains only was identified in nine cases (Figure 5). Hence, in most cases, the monoclonal spike was made of both heavy and light chains. 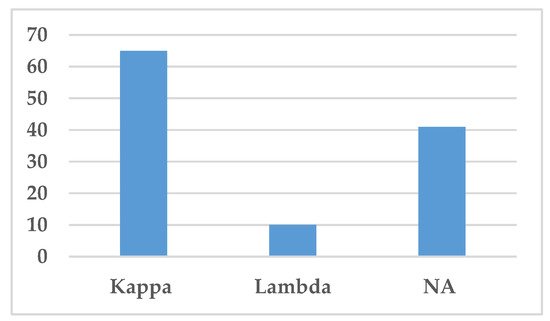 To include both non-crystallized and crystallized material within histiocytes, the term Storing Histiocytosis was used in the literature search. Three cases, including our present case, were described as “non-crystallizing” by histopathological review. On immunohistochemical analysis, the crystals are normally monoclonal, with eight exceptions in this review (Table 2). In many articles, information regarding the etiology of the crystals was insufficient and thereby classified as not available (NA). 6% had negative immunohistochemical staining for immunoglobulin, but many had an associated neoplastic B-cell disorder and had positive staining of plasma cells and lymphocytes in the surrounding area of the histiocytes and were described as an immunoglobulin-type of CSH.