Compounds produced by plants are categorized into primary and secondary metabolites (SMs). Primary metabolites, such as carbohydrates, lipids, and proteins, are directly involved in plant development and growth. In contrast, SMs are multifunctional metabolites that are typically involved in plant defense and environmental communication [1]. Furthermore, they are associated with plant color, taste, and scent. Critically, they are also involved in the responses of plants to stress. For example, SMs are involved in the termination of infection, whether biotic- or abiotic-related [2]. Along with their importance in biotic stress tolerance, plant SMs are also involved in mitigating abiotic stresses such as temperature, drought, salinity, and UV light stresses [3]. When faced with certain biotic and abiotic stresses, plants can reduce morphological traits such as the number of leaves or branches, leaf area, height, and root volume [4]. Indeed, plants have a diverse array of defense mechanisms that allow them to cope with stress conditions, mitigate abiotic stress at the metabolomic level, and enhance SM accumulation during stress.Threat signals are recognized by plants’ receptors and sensors, which enable defensive responses in order to protect them from these stresses. The accumulation of secondary metabolites is one of the responses (Figure 1).Transcriptional factors (TFs) play a role in plant defense control by detecting stress signals and directing downstream defense gene expression. Similarly, the plant’s survival, durability, and productivity are all dependent on increased synthesis of secondary metabolites, known as elicitation. Various biotic (fungi, bacteria, etc.) and abiotic (exogenous hormones) elicitors are used to enhance secondary metabolites production in plants to protect them from stress stimuli (Figure 1). 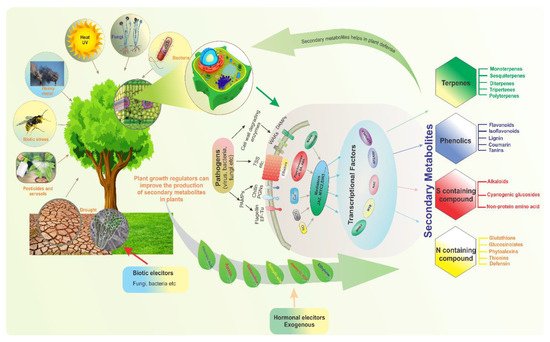 Plants produce SMs through several metabolic pathways that effectively respond to stress conditions. These pathways are initiated from primary metabolite pathways, which produce the ultimate precursors of SMs. The shikimate pathway is the initial pathway for biosynthesis of aromatic amino acids; it is activated in stress conditions to produced tryptophan, tyrosine, and phenylalanine, which further enhance SM biosynthesis [5]. Different SMs accumulate conditionally in various plant parts depending on the stress condition. For example, phytoalexins have antimicrobial activities against phytopathogens and accumulate at high levels in leaves [6]. In addition to their antimicrobial properties, some SMs participate in the construction of polymeric barriers to pathogen penetration.

The precursors of metabolites are essentially produced in the Krebs cycle and shikimate pathway. The proposed SM biosynthesis pathway is shown in Figure 2. Primary metabolites are the critical precursors of SMs. Primary and SMs can be distinguished based on their chemical structure, function, and distribution in plants. The fundamental biosynthetic pathways of metabolites are conserved in the majority of plants, with most primary metabolites found in every tissue type. The maintenance of this metabolic core has led to the occurrence of a limited number of fundamental metabolic frameworks. Frequent glycosylation, methylation, hydroxylation, acylation, oxidation, phosphorylation, and prenylation, as well as fewer chemical alterations due to tailoring of enzymes, causes a wide range of modifications in basic structures. Based on biosynthesis pathways, SMs can be divided into three main groups: phenolic compounds synthesized in the shikimate pathway, terpenes synthesized in the mevalonic pathway, and nitrogen-containing compounds synthesized in the tricarboxylic acid cycle pathway [7]. 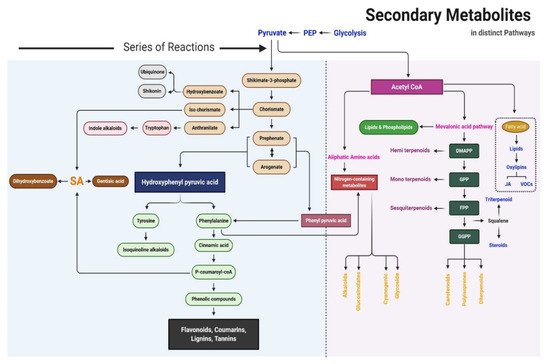 Shikimic acid, the precursor of the shikimate pathway, is produced from a combination of phosphoenolpyruvate (from the glycolytic pathway) and erythrose 4-phosphate (from the pentose phosphate pathway). Phenylalanine, tyrosine, and tryptophan are produced in the shikimate pathway; these are the building blocks of protein synthesis and common precursors for plant SMs such as phenolics and nitrogen-containing compounds [6]. Phenylalanine is the common precursor of flavonoids, lignans, lignins, condensed tannins, and phenylpropanoid/benzenoid volatiles; tyrosine further produces isoquinoline alkaloids, pigment betalains, and quinones (e.g., tocochromanols and plastoquinone); and tryptophan is the precursor of alkaloids, phytoalexins, indole glucosinolates, and the plant hormone auxin [8].