Histones are basic proteins that package and arrange DNA into nucleosomes [1][2][3][4]. There are two major types of histones: a replication-dependent (canonical) type and a replication-independent (replacement) type [5]. In addition to these, centromeric proteins [6][7][8] and histone-like proteins [9] also exist.
In Drosophila, five replication-dependent (canonical) histones are known [10][11]: H2A, H2B, H3, and H4, which are core histones that organize the nucleosome core by forming an octamer comprising two copies of each protein, and H1, which is a linker protein that binds to each nucleosome core [1][2][3][4]. As for replication-independent (replacement) histones, four kinds are currently known in Drosophila: H2AvD, H3.3A, H3.3B, and H4r [12][13][14][15]. In addition to histone modification [16][17][18][19][20][21][22], the replacement of histones by a different histone type causes chromatin remodeling [23][24][25]. Nucleosome remodeling is involved in many important biological processes, such as cell division, differentiation, gene expression, and replication [26][27][28]. Therefore, histone modification and replacement are mechanisms that can lead to epigenetic changes [21][29][30]. In Drosophila, the histone genes for the canonical type of histones are clustered in a repetitive unit, and in Drosophila melanogaster, the unit repeats about 110 times [10][31]. In contrast, the histone genes for the replacement type of histones are found as single genes or with only a few copies per genome, and they contain a few introns [12][13][14][15]. For the detailed structure of the histone genes in Drosophila, please refer to another review article [32]. The mode of molecular evolution of a multigene family, compared to a single gene, can be studied by analyzing histone genes [33].
The usage of codons in protein-coding genes is not uniform among synonymous codons and is biased in many species [34][35]. The mechanism of codon bias has been discussed for decades, and candidate factors include mutation bias, natural selection, and genetic drift [36][37][38][39][40][41][42][43][44]. Unequal usage of codons occurs when the rate of mutations due to nucleotide substitutions is biased or when selection pressure is exerted differently between synonymous codons. Fitness differences among synonymous codons may be present due to differences in the efficiency or speed of translation [45][46]. However, the selection pressure on codons, if any, would be comparatively weaker than that on amino acid sequences; therefore, the codon usage can be influenced by population size [32][39][47][48][49][50][51][52][53]. Since the largest difference in codon usage is observed in the nucleotide at the third codon position of genes, the guanine–cytosine (GC) content at the third codon position is strongly related to codon usage bias. In Drosophila, the higher the GC content at the third codon position is, the stronger the bias of codons [37][40][54]. Moreover, regarding the relationship with the evolutionary rate, the stronger the bias of codons is, the slower the evolutionary rate [55].
In Drosophila saltans, the low GC content of the Xdh and Adh genes was explained by fluctuating mutation bias [56][57]. However, it may also be explained by changes in selection [32][38][50][51][52][53]. Although many Drosophila species have been analyzed for their histone genes [31][49][58][59][60], no changes in the rate of mutations were observed among the species in our analysis [49]. Here, the evolution of the GC content at the third codon position of histone genes in Drosophila is reviewed, and a model that can best explain the evolution of the GC content at the third codon position in Drosophila is presented.

2. Evolution of the GC Content at the Third Codon Position of the Histone Genes in Drosophila 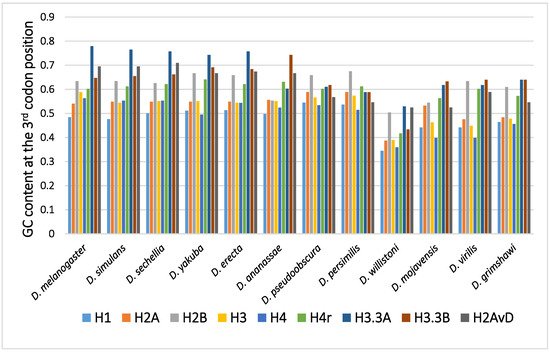 Figure 1. The GC content at the third codon position of the histone genes in Drosophila. The data grouped according to the Drosophila species.

2.1. Disparity in the GC Content at the Third Codon Position among the Genes

2.2. Disparity in the GC Content at the Third Codon Position between the Genes of the Canonical and Replacement Types of Histones

2.3. Disparity in GC Content at the Third Codon Position of the Genes among the Different Species 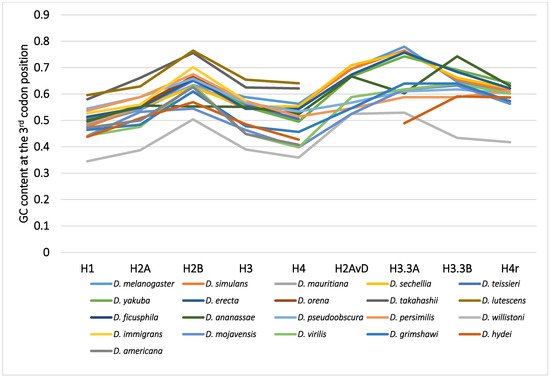 Figure 2. The GC content at the third codon position of the nine histone genes in Drosophila. The points from the same species were connected by lines to show the trend for each species.

2.4. Mode of the Evolution of GC Content at the Third Codon Position According to Phylogeny