Bladder cancer (BC) is a type of cancer that occurs in the bladder's lining. The urinary system, which filters waste products from your blood and produces urine, involves the bladder. BC is the fourth most common cancer among men and the tenth most common cancer among women. Nanotechnology has been extensively developed for cancer management, including cancer diagnosis, detection, and treatment. Several nanoparticles (NP) can be used in in vitro cancer diagnostics, in vivo imaging enhancement, and drug loading techniques.

Currently, different approaches such as cystoscopy, biopsy, urinary cytology, and imaging procedures are used to detect BC [66]. A thin, narrow tube (cystoscope) is placed through the urethra to perform cystoscopy. The cystoscope has a lens that helps to inspect inside of the urethra and bladder for signs of disease [67]. Urine cytology is a process in which a sample of urine is examined under a microscope to monitor for cancer problems [68]. Finally, imaging examinations such as computerized tomography (CT) urogram, magnetic resonance imaging (MRI), positron emission tomography (PET), bone scan, and chest X-ray can help with early diagnosis and influence care decisions [69].
Traditional methods have limited sensitivity and capacity to provide accurate and specific information on the condition, and they rely greatly on the size shift of lymph nodes and the presence of anatomic anomalies, which is typically the primary criteria used to determine the diagnosis [29][70]. Nanoparticles (NP) with a nanometric scale are novel materials that were first used to develop scanning probe microscopy and discover molecular structures, and since been used in a variety of diagnostic applications [71].

The identification of biomarkers in urine, tissue, and blood has been suggested as important components of precision medicine to address existing shortcomings in the diagnosis, treatment, and follow-up of BC. These modern molecular tests can aid in detecting disease earlier, risk-stratifying patients, improving oncological outcome prediction, and optimizing target therapies. We looked at the existing state of the art and the success of the most promising and accessible biomarkers. BTA stat®, BTA TRAK®, NMP22, and UroVysionTM are the only urinary diagnosis systems approved by the Food and Drug Administration (FDA) for BC diagnosis and follow-up. Meanwhile, ImmunoCytTM/uCyt+TM is only approved for BC follow-up [72]. Telomerase, nuclear matrix protein 22 (NMP22), cytokeratin 19, survivin, hyaluronidase (HAase), apolipoprotein A1 (ApoA1), miRNA-21, and galectin-1 protein, on the other hand, are effective biomarkers in the diagnosis of BC [73][74].
Despite some promising findings, particularly in terms of improved sensitivity, when compared to urinary cytology in the diagnostic environment. These molecules have yet to be incorporated into routine clinical practice, owing to the difficulty in deciding the required scenario for use and the lack of high-quality prospective trials. That resulting in a low level of proof. To define the position of these promising biomarkers, more prospective research and broad international collaborations are needed [75]. Nanotechnology has been extensively developed for cancer management, including cancer diagnosis, identification, and treatment. Nanoparticles for cancer treatment have a plethora of potential uses, but most are still in the preclinical stage. GNPs, for example, would be used in cancer screening in vitro studies, in vivo imaging improvement, and as potential drug loading strategies. Aside from that, different preparation methods alter particle sizes, shapes, and structures, reducing their clinical utility [76][77][78][79].

Current imaging methods, such as computed tomography and magnetic resonance imaging (MRI), rely heavily on the size shift of lymph nodes or the presence of anatomic anomalies as the primary criteria for diagnosis [80]. Nanoplatform of contrast agents has shown some promising results in imaging approaches to address this problem [81].
BC, as previously mentioned, has the highest recurrence rate of all cancers, owing in part to insufficient transurethral resection. The failure of cystoscopes to identify invisible lesions during the resection process results in inadequate resection [82]. Davis et al evaluated the ability of the endoscope approach and surface-enhanced Raman NPs to detect bladder tissue as cancerous or normal (Figure 1) [83]. After topically administration of NPs to human bladder tissue samples, both tissue permeability-based (passive) targeting and antibody-based (active) targeting was assayed. The receiver operating characteristic region under the curve (ROC AUC), for multiplexed molecular imaging of CD47 and Carbonic Anhydrase 9 tumor proteins was 0.93. (0.75, 1.00). Furthermore, with a ROC AUC of 0.93, passively targeted NPs allowed tissue classification. As compared to standard bladder urothelium, passively targeted nanoparticles penetrated five-time deeper and attached to tumor tissue at 3.3-time higher concentrations in cancer. Indicating that there is an improved surface permeation and retaining function in human BC. 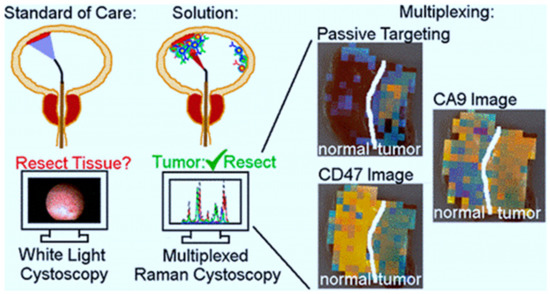 Figure 1. The use of surface-enhanced Raman scattering nanoparticle (NPs) for multiplexed imaging of bladder cancer tissue [83].
Quantum dots (QD) are fluorescent nanoparticles with superior optical properties compared to organic dyes, but in vivo use of them is constrained by the potential for systemic toxicity. Topical administration of targeted nanoparticles is appealing, because it allows for minimal exposure and dose reduction [84]. Pan et al. successfully indicated that topical (i.e., intravesical) administration of QD-conjugated anti-CD47 resulted in effective ex vivo endoscopic imaging of human BC. In addition, they investigated the biodistribution and toxicity of free QD, and anti-CD47-QD in mice in vivo [85]. Anti-CD47-QD biodistribution in vivo was measured using inductively coupled plasma mass spectrometry. While some mice showed extravesical biodistribution of QD, indicating a route for systemic exposure under some conditions, there was no substantial aggregation of QD outside of the bladder on average. Up to 7 days after injection, there were no signs of high toxicity. Intravesical administering of targeted NPs can minimize systemic exposure, but for clinical use, NPs with well-established bio - safety characteristics should be used to reduce long-term contamination in situations of drug toxicity.
The use of optical imaging technology in conjunction with cancer-specific molecular imaging agents may be an effective solution for promoting cancer detection and enabling image-guided surgical [86]. The most common endoscopic treatment for BC is white light cystoscopy, which has a low detection ability. Developing optical imaging innovations have a lot of promise for better diagnostic precision, but there are not any imaging agents for molecular specificity yet [87]. Pan et al demonstrated strong detection of BC with clinical-grade fluorescence imaging approaches, confocal endomicroscopy, and blue light cystoscopy in fresh surgically extracted human bladders using fluorescently labeled CD47 antibody (anti-CD47) as a molecular diagnostic agent [88]. The specificity and sensitivity for CD47-targeted imaging with blue light cystoscopy were 82.9% and 90.5%, respectively. Based on the results of this study, CD47-targeted molecular imaging could help with BC diagnosis and resection precision.
Despite numerous resections and long-term chemo and immunotherapy, most patients with non-muscle invasive BC undergo recurrence or worsening, necessitating cystectomy and a poor prognosis. Unfinished resection and reimplantation of cancer cells are potential causes, which could be avoided with better resection and adjuvant treatment [89]. Liang et al produced a guided drug for urothelial carcinoma identification, fluorescence-guided resection, and deep-penetrating adjuvant photodynamic therapy (UC) [90]. The method was based on up-conversion nanoparticles (UCNP), which can hold a photosensitizer and convert deep-penetrating near-infrared light into high-energy visible light, which is needed for tumor interpretation as well as the development of reactive oxygen species in the photosensitizer. The mean photoluminescence of cells in the targeted group was 5 to 8 times higher than in control groups as a result of the labeling, makes it for quick detection of positive cells with low background auto-fluorescence.
QDs are commonly used in biomedical fields as fluorescent labels. Yuan et al developed quantum dot (QD) fluorescent probes that were linked to a monoclonal antibody against prostate stem cell antigen (PSCA) (QD-PSCA). The targeted imaging of QD-PSCA probes in EJ human bladder urothelial cancer cells was investigated using this nanoplatform. They also looked into the efficacy of non-invasive tumor-targeted imaging using these QDs in vivo conditions. By chemical covalent linking, QDs with an emission wavelength of 605 nm (QD605) was covalently linked with PSCA to produce QD605-PSCA fluorescent probes. An ultraviolet spectrophotometer and a fluorescence spectrophotometer were used to test and determine the optical properties of the probes coupled and uncoupled with PSCA. To identify and interpret imaging of the probes for EJ cells, direct immune-fluorescent labeling was used. The findings showed that QD605-PSCA probes maintained QD605’s fluorescent properties, as well as the PSCA protein’s immunogenicity. The probes were able to identify the PSCA protein expressed in BC cells with high specificity, and the fluorescence was stable and long lasting. QD-PSCA fluorescent probes may be helpful for precise targeted labeling and imaging in bladder urothelial cancer cells, according to this report. The probes also have good optical durability, making them suitable for non-invasive targeted imaging, early detection, and targeted in vivo tumor therapy testing.

Researchers identified promising urinary biomarkers for the detection of BC as a result of their efforts to reduce the costs of BC diagnosis and improve patients’ quality of life by removing unnecessarily invasive diagnostic tests [91][92][93][94][95][96][97]. The potential biomarker for early diagnosis of BC is telomerase, nuclear matrix protein 22 (NMP22), cytokeratin 19, survivin, hyaluronidase (HAase), apolipoprotein A1 (ApoA1), miRNA-21, galectin-1 protein, etc. [98]. Biosensors for identifying urinary biomarkers have been established in tandem with their discovery, and they can give low detection limits, a large linear response range, high stability, and high accuracy [99].

3. Applications of Nanomaterials in Treatment of BC

As mentioned earlier, BC is considered one of the most recurrent urogenital cancers in the world [100]. BC is an epithelial carcinoma that unusual cells in the epithelial lining multiply without any control. The most frequent histological class of BC is transitional cell carcinoma (TCC), also named urothelial cell carcinoma (UCC) [41]. Several methods are generally used to treatments of patients who suffered from BC, including chemotherapy, surgery of tumor, radiotherapy, immune therapy, stem cell transformation, and radical cystectomy. However, as we know, these methods will have many side effects such as restricted bioavailability, toxicity, non-selectivity, fast clearance, and limitation in metastasis. Therefore, researchers are studying to find newer treatment methods with fewer side effects and more therapeutic effects [101]. Generally, BC is a very heterogeneous and complex disease with various biological subtypes. So, it has many challenges in grading, classification. Approximately, 70% of patients who suffered from bladder UCC show a superficial carcinoma named non-muscle-invasive BC (NMIBC), while the other patients (30%) progress a muscle-invasive carcinoma (MIBC) bearing the danger of the metastatic spread of the tumor [102]. The most common treatment for BC is surgery, but the findings have been shown that in approximately 80% of patients who underwent surgery, the tumor recurred after 5 years. Therefore, chemotherapy is still considered the main and important treatment in the inhibition of tumor recurrence and progression. Although chemotherapeutic agents, such as taxanes, cisplatin, gemcitabine, etc., facilitate prolong-term survival in many BC patients, the great recurrence rate of the tumor and serious adverse outcomes of therapeutic agents remain for BC therapy. Therefore, more effective and novel management is necessary to increase the quality and quantity of life of the BC patients [102].
Nowadays, nanotechnology has been dramatically helped us to diagnose and treat a wide variety of cancers like that BC. Recently, several nanoparticles (NP) such as polymeric NPs, lipid NPs, metallic NPs have been used to help BC therapy. Various forms of NPs can increase the solubility of drugs with weakly soluble, and multi-functional NPs have acceptable results against renal, bladder, prostate cancer. NPs are also utilized as a drug delivery system (DD) to increase effects and interactions between drugs and the urothelium. Furthermore, nanotechnology can also associate with other modern technologies to advance enhance effectively [103]. Here, we intend to focus on nanotechnologies with potential and useful applications in BC treatment, also we will investigate several nanomaterials as nanocarriers to reduce side effects and enhance the effect of chemotherapy drugs to improve treatment of BC.