Avocado is sensitive to desiccation, chilling and freezing stress and is recalcitrant for seed banking. Field-based living germplasm collections are currently the most used conservation method to protect and preserve the genetic diversity of this species. Cryopreservation offers a secure long-term method to maintain avocado genetic resources in a space efficient and de-risked manner.

Avocado (Persea americana Mill.), a high-value fruit found in almost all tropical and sub-tropical regions of the world [1][2] belongs to the plant family Lauraceae [3], genus Persea [4]. Mexico is thought to be the center of origin of the species [5]. The genus Persea has about 400 to 450 species consisting of the currently often recognized genera Alseodaphne Nees, Apollonias Nees, Dehaasia Blume, Machilus Nees, Nothaphoebe Blume, Persea Mill. and Phoebe Nees. There are eight sub-species of P. americana including P. americana var. nubigena (Williams) Kopp, P. americana var. steyermarkii Allen, P. americana var. zenymyerii Schieber and Bergh, P. americana var. floccosa Mez, P. americana var. tolimanensis Zentmyer and Schieber, P. americana var. drymifolia Blake, P. americana var. guatemalensis Williams, P. americana var. americana Mill. [2][6]. Genetic diversity within the genus Persea, the sub-genera Persea and Eriodaphne and the species P. americana is large and is threatened by the progressive loss of tropical and sub-tropical forests [6]. This genetic diversity can serve as a resource in crop improvement [7][8][9] and plays an important role both ecologically and culturally.
The three recognized ecological races of P. americana [10]; are the Mexican race, P. americana var. drymifolia, adapted to the tropical highlands; the Guatemalan race, P. americana var. guatemalensis, adapted to medium elevations in the tropics; and the West Indian race, P. americana var. americana, adapted to the lowland humid tropics [11]. The ability of the three main races to withstand cold conditions varies; the West Indian race cannot tolerate temperatures below 15 °C, the Guatemalan race can tolerate cooler temperatures of −3 to −1 °C, and the Mexican race withstands temperatures as low as −7 °C exhibiting the highest cold tolerance [12][13][14]. They have distinctive characteristics; e.g., plant habit, leaf chemistry, peel texture, fruit color, disease and salinity tolerance [15]. The Guatemalan and Mexican races and their hybrids are very important for conservation and future breeding programs [8]. Cultivars classified as pure Guatemalan and Mexican races and Mexican × Guatemalan hybrids have been shown to have more diversity than those of pure West Indian race and Guatemalan × West Indian hybrid cultivars [8]. In Mexico and Central America, avocado trees grow under highly varied ecological conditions and natural selection over thousands of years has produced vast populations [8]. This serves as an essential source of varied attributes that are not among horticulturally available items [16].
The main avocado sold throughout the world, ‘Hass’, is a medium sized pear-shaped fruit with dark purplish black leathery skin [17]. Its commercial value is due to its superior taste, size, shelf-life, high growing yield, and in some areas, year-round harvesting [18]. The precise breeding history of ‘Hass ’ is unknown however, it is reported to be 61% Mexican and 39% Guatemalan [19]. This finding is supported by a study that analyzed the complete genome sequences of a ‘Hass’ individual and a representative of the highland Mexican landrace, Persea americana var. drymifolia; as well as genome sequencing data for other Mexican individuals, Guatemalan and West Indian accessions [19]. Analyses of admixture and introgression highlighted the hybrid origin of ‘Hass’, pointed to its Mexican and Guatemalan progenitor races and showed ‘Hass’ contained Guatemalan introgression in approximately one-third of its genome [19]. In Australia, ‘Hass’, represents 80% of total production [20] with 2019/20 producing 87,546 tonnes of avocados, an increase of 2% more than the previous season’s 85,546 tonnes [20]. This increased consumer demand is due to its popularity as a healthy food; often referred to as a superfood due to its beneficial nutrients, vitamins, minerals, fiber and healthy fats [21][22]. Consumer market value of Australian fruit sold domestically was worth ~$845 m in 2019/20 [20].

Field living germplasm collections (Table 1) and (Figure 1), are currently the most used conservation method, but funding and threats from natural calamities; pest and diseases are a problem. 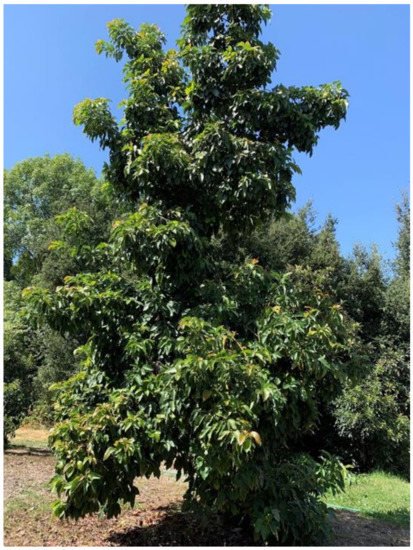 Figure 1. One of the 56 avocado accessions being maintained in The Huntington Botanical Gardens [in San Marino, California USA] living germplasm collection.
Table 1. Avocado germplasm maintained as field repositories throughout the world.

To preserve global avocado diversity; development of improved technologies for avocado conservation, breeding/improvement and propagation is essential. In vitro somatic embryogenesis has direct importance to these objectives [35][36]. Somatic embryogenesis is the process by which somatic cells give rise to totipotent embryogenic cells capable of becoming complete plants [37]. Somatic embryogenesis can be a robust tool to regenerate genetically clonal plants from single cells chosen from selected plant material, or genetically engineered cells [38]. Somatic embryogenic cultures are generally highly heterogeneous since they consist of embryos at different developmental stages [39]. Though heterozygous in nature when regenerated using zygotic embryos as explants, cryopreservation of avocado somatic embryos offers an attractive pathway to conserve avocado germplasm. Recovery of plantlets from somatic embryos and clonal multiplication in vitro is an essential step for commercial application of this technology to crop improvement [40].
Somatic embryogenesis in avocado was first achieved using immature zygotic embryos of cv ‘Hass’ [41]. Studies have reported that the embryogenic capacity of avocado was highly genotype dependent [42]. To improve somatic embryogenesis previous studies have shown that several factors are vital for success, (1) composition of media, (2) hormone type and concentration, (3) type and concentration of gelling agent and (4) light intensity [43]. Morphogenic competence of somatic embryos has been reported to be lost 3–4 months after induction depending on the genotype [41][44]. In addition, the main factor limiting conversion of somatic embryos into plantlets is incomplete maturation [45]. Studies have found that there are two types of regeneration that occur after maturation; unipolar (only shoot apex or root) and bipolar (both shoot apex and root). Shoots regenerated from unipolar embryos can either be rooted or rescued using in vitro micrografting [46]. Studies have shown that the percentage of high-quality bipolar embryos from avocado somatic embryos was extremely low at 2–3% and was genotype dependent [41][46][47]. This low rate of somatic embryo conversion is currently the main bottleneck in avocado regeneration via somatic embryogenesis [40]. A study described an in vitro induction and multiplication system for somatic embryos of avocado, across four cultivars, which remained healthy and viable for 11 months, on a medium used for mango somatic embryogenesis [35]. Furthermore for one of the cultivars, cultivar ‘Reed’, a two-step regeneration system was developed that resulted in 43.3% bipolar regeneration [35].
Cryopreservation of avocado somatic embryos has been successful for various cultivars (Table 2). The effect of cryogenic storage on five avocado cultivars (‘Booth 7’, ‘Hass’, ‘Suardia’, ‘Fuerte’ and ‘T362’) using two cryopreservation protocols (controlled-rate freezing and vitrification) was investigated [48]. In terms of controlled-rate freezing, three out of five embryogenic cultivars were successfully cryopreserved with a recovery of 53 to 80%. Using vitrification, cultivar ‘Suardia’ showed 62% recovery whereas ‘Fuerte’ had only a 5% recovery. When the droplet-vitrification technique was used, two ‘Duke-7’ embryogenic cell lines showed viability ranging from 78 to 100% [49]. Protocols employed in both studies cannot be applied in general to multiple cultivars and optimization of loading sucrose concentrations and plant vitrification solution 2 (PVS2), temperature and times need more intensive research.
Table 2. Summary of successfully applied cryopreservation techniques to avocado somatic embryos. * Recovery is defined as any somatic embryo clump which was proliferating into new callus clumps.

Cryopreservation is a secure and cost-effective method for long-term storage of avocado. It provides a high degree of genetic stability in maintaining avocado collections for the long-term compared to other conservation methods. Shoot-tip cryopreservation conserves ‘true-to-type’ avocado plant tissue. It is ideal for preserving a core selection of avocado genotypes, for example, with superior characteristics, disease and pest resistance, rarity, drought and salinity tolerance. In one study, it was shown that axillary buds of Mexican and Guatemalan races were viable through fluorescein diacetate staining after dehydration with sterile air and being treated with cryopreservation solutions; however, shoot regeneration was not achieved with the cryopreserved material [50]. Another study, showed that dehydration at 60 min with sterile air and 30 min in PVS4 at 0 °C produced normal plant development and 100% survival was obtained after 30, 45 and 60 days [51].