2021-05-31 11:41:30
This entry is suiatable for the readers.Suggestions: not include the hyperlink of autophagy since is not related to the topic of autophagy in hepatitis; sequencially number the figures
2000/2000
×
Table of Contents
Hide
Others

Lysine63Ubiquitination and Fibrosis in Diabetes

Diabetic Nephropathy (DN) is the leading cause of end-stage renal disease. We previously showed that tubulo-interstitial accumulation of lysine 63 (K63)-ubiquitinated (Ub) proteins drives the progression of fibrosis in DN and that the extent of renal K63-Ub can be easily monitored through the assessment of urinary miR-27b-3p. In the present manuscript we explored the renoprotective effect of a specific K63-Ub inhibitor (NSC697923), alone and in combination with the ACE inhibitor molecule Ramipril. In vitro, in tubular epithelial cells, we found that NSC697923, aside from suppressing tubular accumulation of K63-Ub proteins was also capable to inhibit hyperglycemia-induced epithelial to mesenchymal transition (EMT); specifically, treatment with NSC697923 reduced the expression of EMT markers such as α-SMA, Collagen I, Vimentin, FSP-1 and Collagen III along with tubulointerstitial and glomerular fibrosis both in vitro and in vivo. Diabetic DBA/2J mice treated with NSC697923 also displayed recovery of urinary miR-27b-3p and restored expression of p16INK4A, indicating a protective effect of this compund on cellular senescence in tubular cells. Moreover, we found that the combination of NSC697923 and Ramipril was effective to reduce uACR in diabetic DBA/2J mice. In conclusion, we suggest that selective inhibition of K63-Ub, when combined with the conventional treatment with ACE inhibitors, might represent a novel treatment strategy to prevent the progression of fibrosis and proteinuria in DN. Finally we suggest the dosage of urinary miR-27b-3p levels to monitor treatment efficacy.

Diabetic nephropathy (DN) is a renal complication of diabetes that can lead to renal failure when untreated. Several therapeutic options are currently available for the management of high blood pressure and hyperglycemia such as inhibitors of the renin angiotensin aldosterone system (RAAS), hypoglycemic drugs such as metformin, sodium glucose transporter 2 (SGLT-2) inhibitors, and glucagon-like peptide 1 (GLP-1) agonists. These molecules exert beneficial effects in the context of renal damage and have also been shown to preserve renal function in animal models through their ability to inhibit pathways leading to renal fibrosis. Moreover, results from recently published clinical trials have unveiled the effects of SGLT-2 inhibitors in reducing the risk of kidney failure as well as of death from cardiovascular causes or heart failure hospitalization in chronic kidney disease patients with or without type 2 diabetes. However, no clinical data exploring renal fibrosis among other outcomes is currently available, and no targeted therapies have been developed to effectively prevent or reduce the molecular process leading to renal fibrosis.

Over the last few years, our group has described the role of lysine 63 (K63) ubiquitination in DN-related fibrosis. We showed that an increased expression of the E2 enzyme UBE2v1 (responsible for K63-linked polyubiquitin chains formation) is associated with epithelial to mesenchymal transition (EMT) of tubular cells, increased production of extracellular matrix, and progression of kidney fibrosis in diabetic patients. This process is involved in autophagy-induced cell death and can be monitored by dosing specific urinary miRNAs, particularly miR-27b-3p and miR-1228-3p, whose expression levels inversely correlate with renal fibrosis. The beneficial effects of inhibiting this pathway in vivo however remain to be explored.

Another mechanism that drives kidney fibrosis in DN involves accelerated cellular senescence of tubular cells. DcR2, a transmembrane receptor of tumor necrosis factor–related apoptosis-inducing ligand (TRAIL) belonging to the tumor necrosis factor receptor superfamily, represents a potential target to modulate the induction of cellular senescence in tubular cells. It has also been demonstrated that hyperglycemia dramatically increases the renal expression of the cyclin-dependent kinase (CDK) inhibitor p21, thus inducing an increase in the senescence of tubular epithelial cells. However, the role of the different mechanisms mediating kidney aging in diabetes remains to be fully clarified.

In this study, we investigated whether the in vitro and in vivo inhibition of K63-linked polyubiquitin chains accumulation, using the specific E2 complex inhibitor compound NSC697923, alone and in combination with the RAAS inhibitor Ramipril, has beneficial effects in terms of preventing kidney fibrosis and reducing albuminuria. We also explored the possibility to use specific circulating miRNAs as biomarkers to monitor the efficacy of different therapeutic treatments.

In vitro experiments confirmed that short exposure of tubular cells to high glucose media is associated to a marked increase of a-SMA, Collagen I and Vimentin, indicating that EMT actively contributes to the synthesis of extracellular matrix components. While stimulation of tubular cells with Ramipril was able to reduce Vimentin expression, it had no effect in the suppression of Collagen I synthesis. Interestingly, treatment of tubular cells with NSC697923, alone and in combination with Ramipril, completely restored the epithelial phenotype.

DBA/2J mice were used as our in vivo model of DN. Animals were initially injected with either STZ or PBS, and then treated with Ramipril and NSC697923, alone and in combination.

The effects of in vivo treatment with NSC697923 and Ramipril on the development of tubule-interstitial fibrosis within the renal cortex, renal medulla, and glomeruli was investigated by Collagen III and FSP-I immunohistochemistry as well as Sirius Red and Fast Green staining, and PAS staining. For the quantification of each staining associated with computerized image analysis, the perivascular regions as well as the limits of each biopsy were excluded from the analysis of the cortical and medullary compartments, while the Bowman’s capsule was excluded when analyzing the glomerular area. Diabetic mice showed an increased amount of Collagen III deposition, both in the renal cortex, at the tubulo-interstitial (Figure 1L) and glomerular (Figure 1Q) levels, and in the renal medulla (Figure 1V), when compared with non-diabetic mice (Figure 1K,P,U, respectively). Interestingly, packed Collagen III fibers were accumulated in the glomerular mesangium (Figure 1Q), suggesting the development of renal damage comparable to human DN. In diabetic mice, treatment with Ramipril resulted in a slight reduction in Collagen III expression at the tubulo-interstitial level and medulla (Figure 1M,W, respectively), which was significant only at the glomerular level (Figure 1R) when compared to untreated diabetic mice (Figure 1P). Interestingly, NSC697923 alone (Figure 1N,S,X) or in combination with Ramipril (Figure 1O,T,Y) preserved the integrity of the renal parenchyma by significantly reducing Collagen III deposits at both the tubulo-interstitial and glomerular levels and in the medullary region, so that levels were comparable to those in non-diabetic mice. Control mice, both untreated (Figure 1K,P,U) and treated (Supplementary Figure S3), showed similar amounts of Collagen III fibers in all compartments of renal parenchyma. 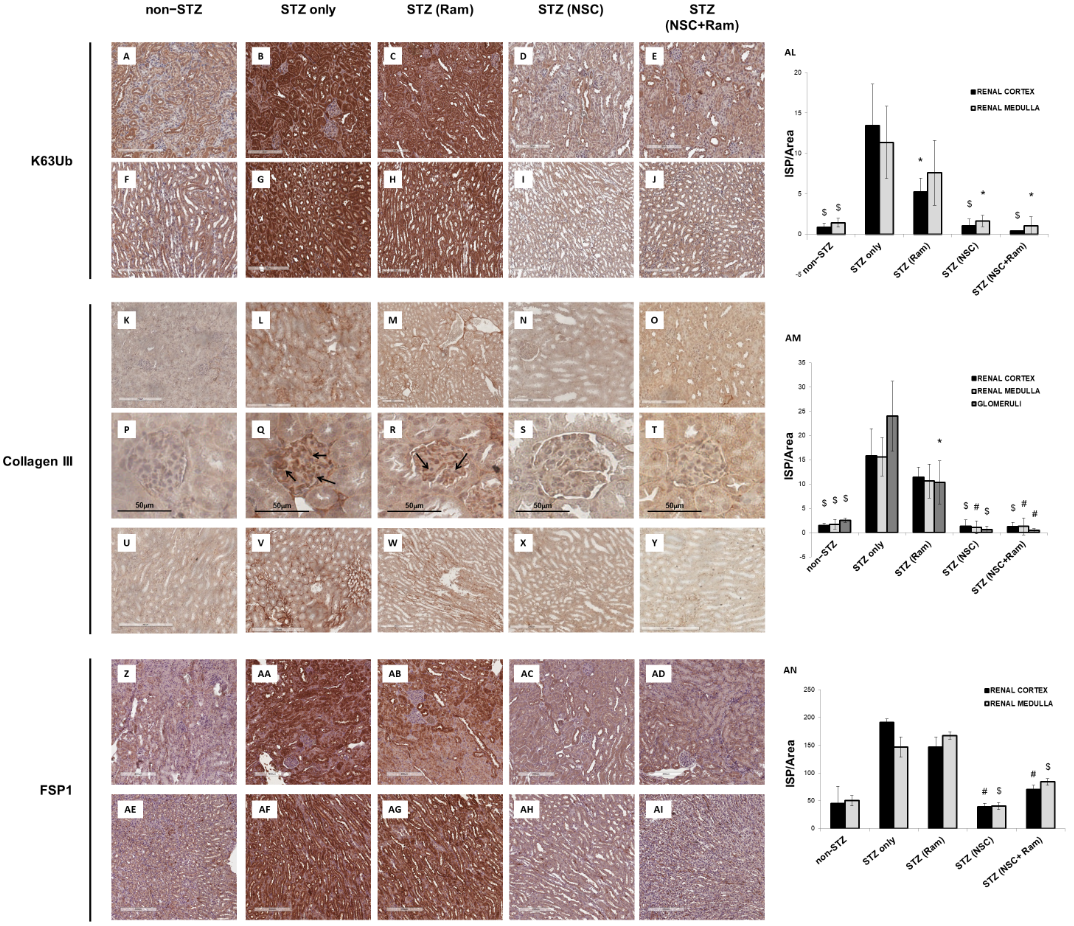 4. Effect of NSC697923, alone or in combination with Ramipril, on albuminuria and on the concentration of urinary miR-27b-3p in diabetic mice

In order to evaluate the effects of Ramipril and NSC697923 on STZ-induced albuminuria in diabetic mice, we performed quantification of urinary albumin and normalization with urinary creatinine (Figure 2A). As expected, the mean urinary albumin to creatinine ratio (uACR) was higher in the diabetic compared to control mice. Moreover, NSC697923, better than Ramipril alone and the combination of both, was able to mitigate STZ-induced albuminuria, however no statistical significance was observed, probably due to the reduced number of animals available for this analysis.

To evaluate the effect of NSC697923, alone or in combination with Ramipril, on the expression of candidate biomarkers of diabetes-induced renal injury in vivo, we assessed the urinary levels of miR-27b-3p in our animal model. We focused on the analysis of miR-27b-3p, since this miRNA, unlike miR-1228-3p, is evolutionarily conserved in mice. Interestingly, miR-27b-3p was significantly downregulated in diabetic mice (STZ-only) compared to the control group (non-STZ) (Figure 2B) as observed in Human samples. Treatment with Ramipril did not affect miR-27b-3p levels in urine of DBA/2J diabetic mice, however, the treatment with NSC697923, alone and in combination with Ramipril, was associated with the restoration of miR-27b-3p levels. Interestingly, we observed a moderate but very significant inverse correlation between uACR and urinary miR-27b-3p (Figure 2C), thus further supporting the role of miR-27b-3p as a biomarker of renal function decline in diabetes. 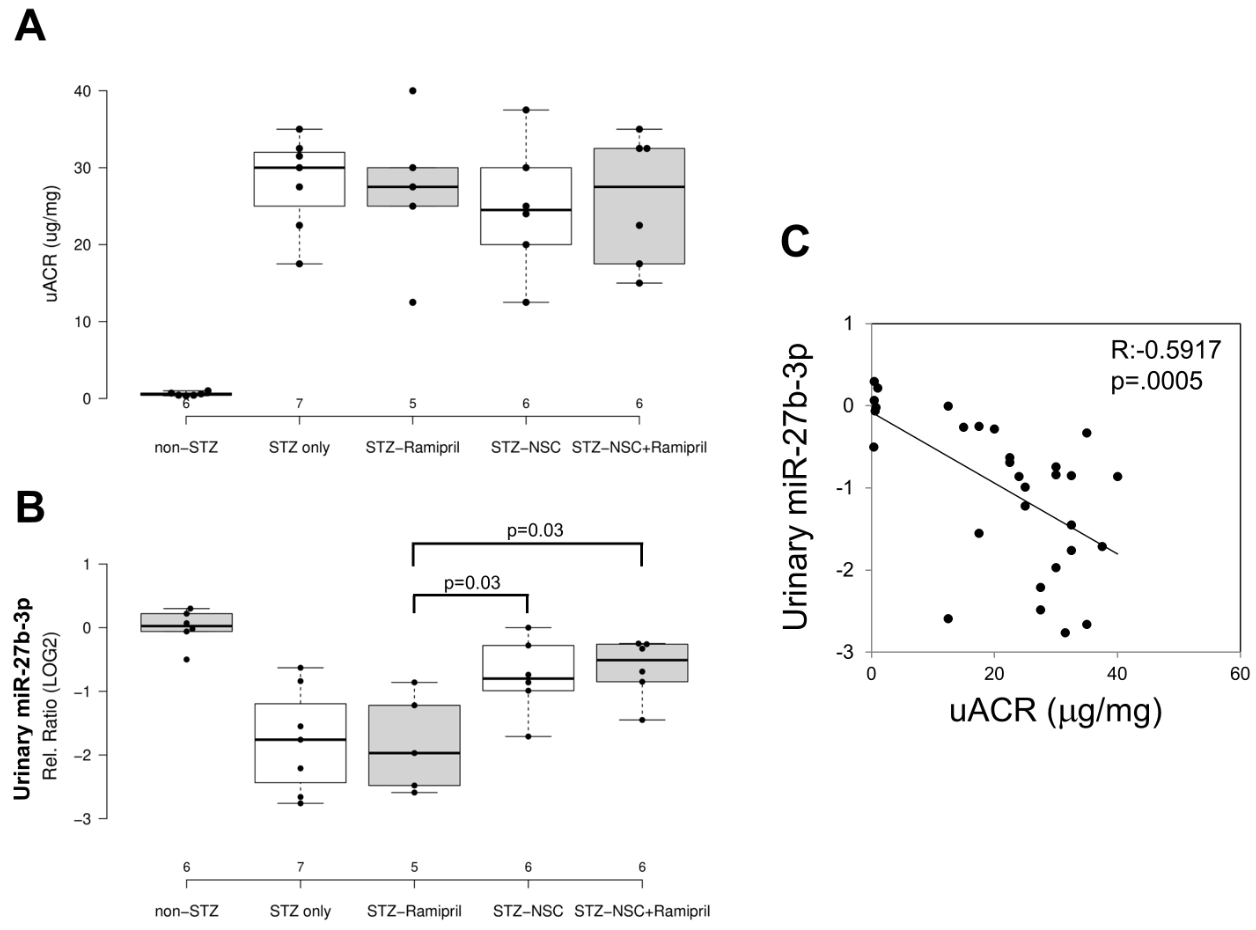 5. NSC697923, alone and in combination with Ramipril, modulates cellular Senescence, both in vitro and in vivo

Premature senescence is a key cellular event in renal fibrosis and is associated with the progression of diabetic nephropathy therefore we evaluated whether NSC697923 might affect hyperglycemia-induced tubular cell senescence in vitro. To this purpose, we stimulated tubular cells with high glucose for 48 h both in the absence (Figure 3B) and in the presence of Ramipril (Figure 3C), or NSC697923 (Figure 3D), or the combination (Figure 3E). Interestingly, high glucose stimulated tubular cells acquired a senescent phenotype as determined by significant increase in SA-β-GAL positivity compared to the basal conditions (Figure 3A,B,P). Interestingly under hyperglycemic conditions in the presence of Ramipril, tubular cells did not show a significant reduction in hyperglycemia-induced SA-βGAL positivity (Figure 3C,P), while NSC697923 both alone (Figure 3D,P) and in association (Figure 3E,P) significantly reduced cellular senescence and SA-βGAL positivity (Figure 3P). Moreover, we investigated the expression of the senescent marker p16INK4A and its potential association with the accumulation of K63-ubiquitinated proteins in vivo. 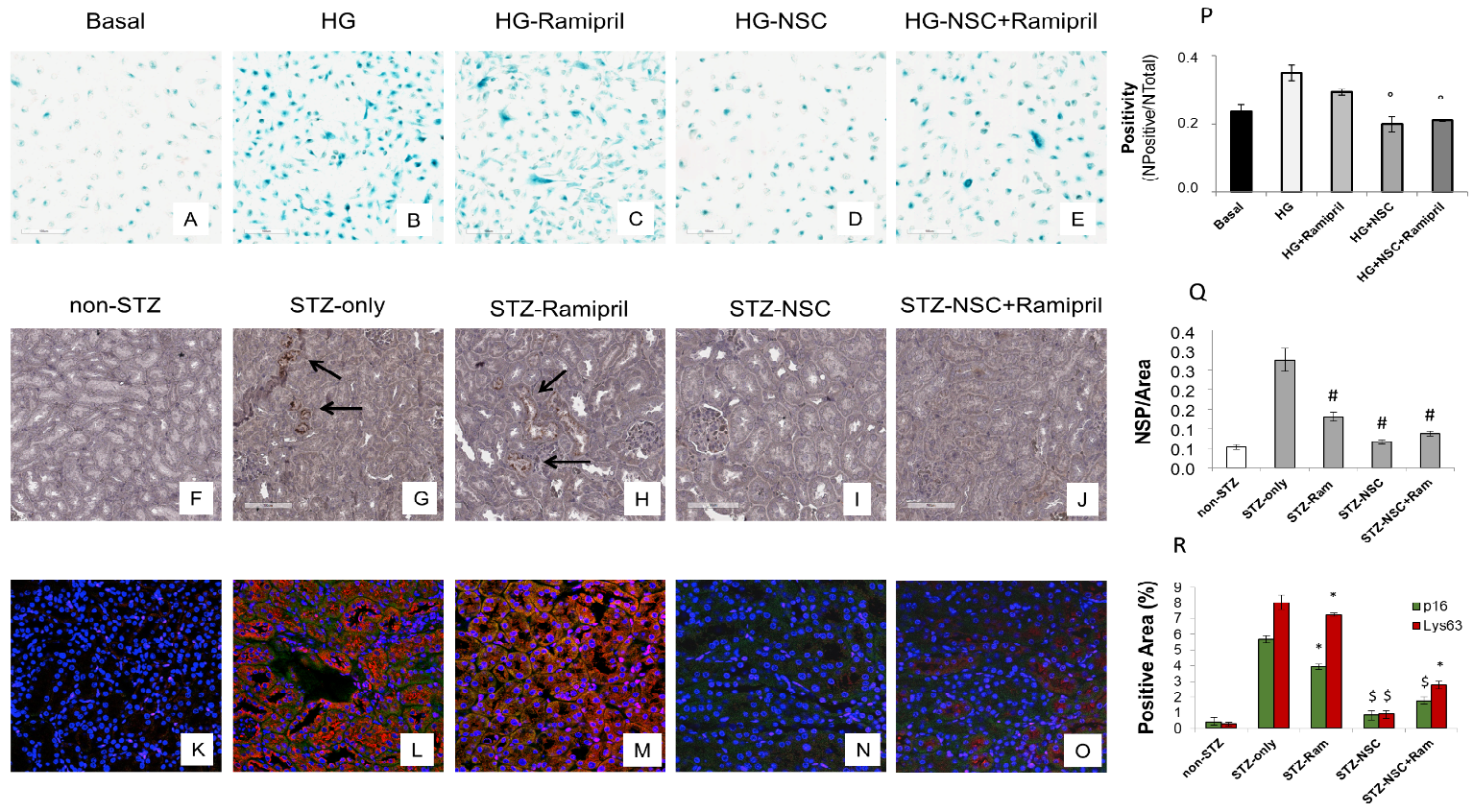 Pre-clinical studies can be leveraged to ameliorate current therapeutic approaches since they allow the identification of novel therapeutic targets. In this scenario, we showed that the selective inhibition of K63 ubiquitination by NSC697923 could be considered as a novel treatment option to halt the process leading to kidney fibrosis in experimental diabetes. In addition, the additive effect of the association of conventional ACE inhibitor treatment with NSC697923 with regard to a reduction of fibrosis and the potential role of NSC697923 in the reduction of albuminuria, as well as its effect on miRNA-27b-3p modulation, can represent a novel approach to tackle the multifactorial pathophysiology of renal complication in diabetes.