Artificial domestication and improvement of the majority of crops began approximately 10,000 years ago, in different parts of the world, to achieve high productivity, good quality, and widespread adaptability. It was initiated from a phenotype-based selection by local farmers and developed to current biotechnology-based breeding to feed over 7 billion people. For most cereal crops, yield relates to grain production, which could be enhanced by increasing grain number and weight. Grain number is typically determined during inflorescence development. Many mutants and genes for inflorescence development have already been characterized in cereal crops. Therefore, optimization of such genes could fine-tune yield-related traits, such as grain number. With the rapidly advancing genome-editing technologies and understanding of yield-related traits, knowledge-driven breeding by design is becoming a reality.

The global population is expected to increase to 9.2 billion in 2050, and agricultural production needs to increase by about 70 percent from current levels to meet the increased food demand, as predicted by Food and Agriculture Organization (http://www.fao.org/wsfs/forum2050/wsfs-background-documents/issues-briefs/en/, accessed on 1 February 2021). Cereal crops, such as rice, wheat, and maize, are the world’s most important sources of calories for humans, livestock feed for animals, and raw material for biofuel [1]. However, with the threat of urbanization, land erosion, sea-level rise, and pollution, the arable land for cereal-crop production will become more limited [2]. Therefore, improving cereal-crop-grain production is critical to meet further demand.
A majority of modern crop varieties were domesticated from their wild ancestors within the past ~12,000 years [3]. During domestication, plants were selected to render them easier to breed, culture, harvest, and store seeds [4]. In the past century, domesticated crops underwent improvement to achieve high productivity and widespread adaptability, by pyramiding beneficial mutations and recombinants in key genes [5]. Adopting new technologies, such as hybrid breeding, high-yielding dwarf wheat and rice varieties, and genetic modification by transformation, the grain yield of cereal crops has risen steadily [4][5][6]. Nowadays, rice, wheat, and maize supply nearly half of the calories consumed by humans, suggesting that their production is critical to feed an increasing population [1].
Dissecting the genetic changes during crop domestication and improvement is critical to understand the mechanistic basis of grain yield, and to guide breeding efforts towards developing high-yielding varieties [1]. Grain yield of cereal crops is a complex trait controlled by numerous quantitative trait loci (QTL). Current crop yield enhancement relies heavily on natural genetic changes [4][5]. Great progress has been made in mapping and cloning these yield-related QTLs in crops [7][8][9][10][11][12][13][14]. However, a majority of natural variants underlying yield-related traits have a minor effect, and those that have a greater effect may act only in specific genetic backgrounds [7][8][9][10][11][12][13][14], challenging their application in yield enhancement. On the other hand, climate change is spurring extreme environmental conditions, including drought, heat, cold, saline, and alkaline soils [2]. Therefore, geneticists and breeders face the challenge of enhancing the yield of cereal crops through genetic improvement of germplasm to bridge the gap between production and demand [2].
For most cereal crops, yield relates to grain production. Increasing grain number and weight are two important paths to increase yield per plant [10][11][14]. Grain number is determined during inflorescence development [12][13][14][15], and mutants and genes affecting this process have already been well studied in crops such as rice and maize [8][12][13][14][15]. Recent studies suggest that we can create new beneficial alleles by genome editing to optimize the expression or function of these genes. Indeed, some of these new alleles may have a larger effect than natural alleles [16][17][18][19][20]. These findings suggest that applying the knowledge of crop inflorescence development can help to engineer crop yield improvement, and usher in a new era of breeding practice. (Figure 1) 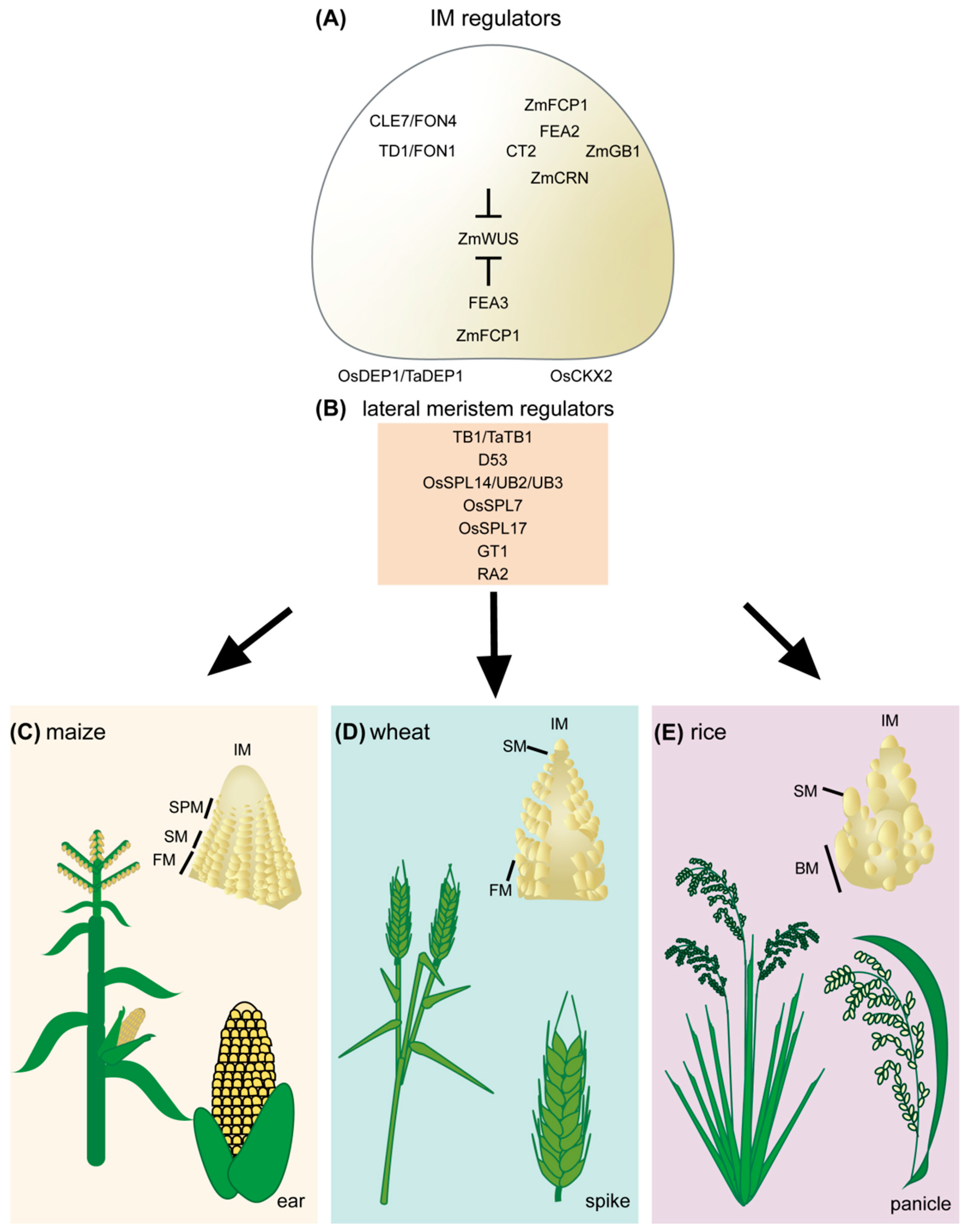 After just a little under a decade, CRISPR/Cas9 has revolutionized gene editing capabilities in a wide range of organisms, including cereal crops [21][22]. The case studies in the previous section demonstrate the power of CRISPR/Cas9 to modulate gene activity to improve crop yield. Still, several milestones must be reached to make CRISPR a routine tool for crop improvement, including engineering precise edits, stacking mutations, and introducing edits into agriculturally important germplasm. Here, we highlight several recent advances in CRISPR technologies and techniques with a promise to more efficiently deploy gene editing in cereal crops (Figure 2).

Figure 2. Recent technological advances to facilitate CRISPR/Cas9 editing in cereals. Emerging CRISPR technologies include SpRY, a mutated form of Cas9 with a relaxed PAM requirement; CRISPR base-editing, in which individual base pairs are changed; prime editing, in which a Cas9–nickase is fused to a reverse transcriptase to produce precise knock-in mutations guided by a pegRNA template; homologous recombination, where larger insertions can be introduced into a genomic region of interest; and SunTag gene activation and methylation/demethylation, where a catalytically inactive Cas9 is fused to effectors that modulate gene expression or methylation patterns. CRISPR technology can be delivered into cereals, using improved transformation methods involving developmentally important genes, such as BABYBOOM–WUSCHEL or GROWTH-REGULATING FACTOR 4 and GRF-INTERACTING 1 (GRF–GIF), or through de novo meristem induction. In addition to using stable transformation to enable CRISPR editing, alternative delivery of CRISPR reagents includes the use of viral vectors, nanotechnology, and haploid induction plus CRISPR.

Most crop genome editing and evaluation of yield-related traits has not been in commercial elite lines [17][20]. However, a weak CLV allele was recently found to increase yield up to 28% in elite hybrids in Vietnam [23]. This suggests great potential for application of genome-edited alleles in commercial varieties. A recent study integrated multiplexed CRISPR/Cas9-based high-throughput targeted mutagenesis with genetic mapping and genomic approaches to successfully target 743 candidate genes, indicating that genome editing has advanced to a high-throughput stage [24]. This review focused on knowledge of inflorescence yield-related traits in cereal crops, including key developmental regulatory genes. It is becoming clear that quantitative variation of yield-related traits can be successfully engineered by editing of developmental genes, suggesting that crop breeding does not need to depend on naturally occurring mutations. Instead, artificially generated variation can be the raw material for future breeding. With advances in genome-editing technologies and the increasing understanding of biological traits, knowledge-driven breeding by design is becoming a reality that can be deployed to improve the grain yield of current elite inbred lines and to domesticate wild ancestors de novo to recreate new crop varieties [25]. These versatile technologies will allow us to generate diverse germplasm for a growing population and engineer more resilient crops under changing climate conditions.