Hypoxia in the Cell Cycle

The cell cycle is an important cellular process whereby the cell attempts to replicate its genome in an error-free manner.

The cell cycle is a process through which cells faithfully replicate their genetic material. Strict control over its progression is therefore needed to avoid errors that could result in cell death or cell malignancy. As such, understanding how the cell cycle is affected by external and internal stresses is of the utmost importance, in particular, the stress caused by hypoxia, or reduced oxygen availability. Hypoxia is an important factor in embryo development but is also present in numerous pathological settings such as ischaemic events and cancer [1]. Oxygen is fundamental for both energy homeostasis and cellular viability, therefore, to deal with such stresses, cells possess complex response mechanisms that aim at restoring oxygen homeostasis.

In cells, oxygen is sensed by a class of 2-oxoglutarate, iron-dependent dioxygenases (2-OGD); the most recognized of which are the prolyl-hydroxylases (PHDs). These are instrumental in the signalling cascade initiated in response to a reduction in oxygen, which ultimately results in the activation of the hypoxia-inducible factor (HIF) transcription factor family. HIFs are heterodimers corresponding to a HIF-α (alpha) and HIF-1β (beta) subunit [2], while the PHDs present three isoforms (PHD1, PHD2, and PHD3) and possess a low affinity for oxygen so that any small deviation from normal oxygen concentrations will result in their enzymatic inactivation [3]. Under normal oxygen concentrations, the PHDs hydroxylate specific proline residues in the oxygen-dependent degradation domain (ODD) of HIF-α. This post-translational modification increases the binding affinity of the von Hippel-Lindau (VHL) protein, which acts as part of the recognition complex for the E3 ligase comprising of Elongin B/C, Cullin2, and RBX1 [4]. This complex ubiquitinates HIF-α, which marks the protein for proteasomal degradation. In the absence of either oxygen, iron (Fe2+), or 2-oxoglutarate (2-OG), the PHDs cannot function and the ability of VHL to promote ubiquitination of HIF is reduced, which results in the stabilization of HIF-α. Upon stabilization, and in combination with its binding partner HIF-1β, a HIF-1α-β heterodimer promotes the transactivation of a variety of target genes in response to reduced oxygen concentrations (for a recent review on HIF-dependent genes see [5]). Notably, it is important to highlight that, in addition to HIF, further transcription factors are also activated by hypoxia. These include Myc, p53, AP-1, Sp1, and NF-κB [6] (Figure 1).

The cell cycle can be divided into two main stages: interphase and cell division (Figure 2). Interphase is where cells spend the majority of the time and can be subdivided into Gap1 (G1), S (DNA synthesis), and Gap2 (G2) phases; whereby following the G2-phase the cells enter mitosis (M) (cell division). Here, the duplicated DNA is distributed equally into two daughter cells, which then enter a new cell cycle (Figure 2). In G1, individual cells grow and their cellular content is duplicated, while in S-phase, the DNA is replicated, then in G2, the cell undergoes further growth and prepares for cellular division [7]. Finally, in mitosis, the cell divides its contents into two equal daughter cells. Here, depending on the cell type, cells will either enter another G1 stage or enter quiescence (also known as G0), whereby the cell exits the cell cycle and stops dividing [8]. 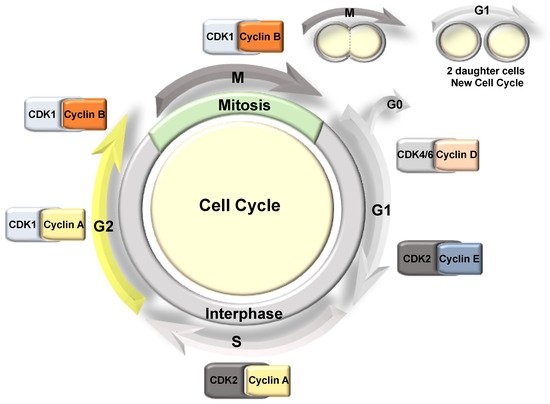 Figure 2. The mammalian cell cycle phases. The cell cycle is divided into two main phases: interphase that includes G1, S, and G2, and mitosis. Each of these stages is associated with a CDK/Cyclin pair, controlling the progression of the cell cycle.
The progression through the cell cycle is regulated by serine/threonine protein kinases known as cyclin-dependent kinases (CDKs), alongside their partner proteins, cyclins (Figure 2). However, CDK-independent roles have also been described for the cyclins in the regulation of apoptosis, differentiation, DNA repair, and metabolism reviewed in [9][10]. CDK-cyclin complexes phosphorylate specific substrates in each phase of the cell cycle, driving the transition to the next phase. The activation of the CDK depends on the association with the corresponding regulatory cyclin; therefore, the levels of each cyclin fluctuate during the cell cycle. This oscillation of the cyclin levels is regulated through their targeted degradation by different E3 ligase complexes in response to signalling pathways such as growth factor and oncogene activation [11]. CDK activity is also regulated by phosphorylation and by association with CDK-cyclin inhibitors such as p21 and p27, while the dysregulation of CDK activity is a common feature in many cancers [12][13].
Cell cycle progression is therefore a tightly regulated process that includes several checkpoints that are imperative during cell division to ensure the correct segregation of the genetic material between daughter cells. Furthermore, as the cell cycle is also a highly demanding and energy-consuming process, it follows that the oxygen-sensing system can directly impact cell cycle progression [14]. Indeed, key players in the hypoxia response are involved in the regulation of essential components during each phase of the cell cycle, at each of the transcriptional and protein stability levels, alongside localization and/or activity. Hence, oxygen deprivation or hypoxia must impact normal cell cycle progression [14]. In this review, we provide examples of how cell cycle progression in normal and cancer cells can be affected in response to oxygen levels, focusing on the molecular interplay between hypoxia and known cell cycle regulators.

Hypoxia plays a central role in diverse aspects of cancer biology as a hypoxic microenvironment is prevalent in solid tumours. It is known that oxygen levels regulate cell proliferation and that depending on the cell type, hypoxia can inhibit cell proliferation by inducing cell cycle arrest [15][16][17]. However, tumour cells often adapt to survive in such hypoxic conditions. This adaptation is partially promoted by the essential role HIF plays in the transcriptional regulation of genes associated with angiogenesis, apoptosis, cell proliferation, and energy metabolism [2]. HIF-dependent activation of these genes provides tumour cells with an adaptive advantage over normal cells during periods of hypoxic stress.

The Myc transcription factor, which is also associated with cell proliferation, is similarly overexpressed in various cancer types [18]. Myc is known to repress the expression of the CDK cyclin inhibitors p21 and p27 [18]. In hypoxia, the expression of p21 and p27 is induced in a HIF-1α dependent manner, partially by displacing Myc from their promoters [15]. Interestingly, HIF-2α cooperates with Myc and promotes cell proliferation in renal clear cell carcinomas (RCC) and other cell types [19]. In RCC, HIF-2α is also known to induce Cyclin D1 via its binding to an enhancer site [20] (Figure 3). The effects of HIF-2α on cell cycle control in RCC cells have become even clearer following data derived from treatments with a specific HIF-2α inhibitor (PT2399), in which the cell cycle was identified as the main signature controlled by HIF-2α [21][22]. 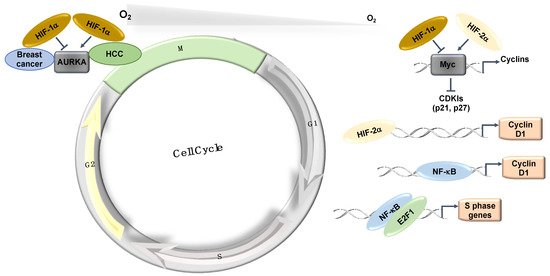 Figure 3. Hypoxia-induced transcriptional effects on the cell cycle. HIFs and NF-κB control the expression of a number of important components of the cell cycle machinery and control mechanisms. HCC: Hepatocellular carcinoma.

The mitotic kinase—Aurora A (AURKA)—also has an important role in mitotic progression and has been related to oncogenic phenotypes [23]. AURKA is overexpressed in a variety of different tumours and has been implicated in cell transformation and centrosome amplification [24][25]. In hepatocellular carcinomas (HCC), the increased levels of AURKA do not always correlate with gene amplification [26]. Interestingly, AURKA was shown to be induced by hypoxia in a HIF-1α dependent manner in HepG2 cells [27] as HIF-1α binds to the AURKA promoter and upregulates its transcription, leading to an increase in cell proliferation [27]. This study proposed that AURKA might be involved in the hypoxia-induced proliferation of HCC tumours [27] (Figure 3). In this tumour type, hypoxia induction of HIF-1α and AURKA might be involved in promoting HCC proliferation [27]. However, in breast cancer cells (MCF-7, MDA-MB-231, and SK-Br3), microarray analysis in response to hypoxia illustrates that hypoxia downregulates AURKA [28]. In this study, the authors demonstrated that hypoxia downregulated AURKA via a HIF-1α dependent mechanism, suggesting that HIF-1α is a negative regulator of AURKA in breast cancer tumours [28]. These studies highlight the cell-specific nature of HIF’s function in cell cycle regulation.

Cell division cycle-associated protein 2 (CDCA2) has similarly been shown to be a target of the hypoxia pathway [29]. Analyses of publicly available ChIP-Seq and RNA-Seq datasets demonstrate that CDCA2 is induced in hypoxia and is important for the control of proliferation in prostate cancer cells. The intracellular signal transducer protein, SMAD3, binds to the CDCA2 promoter and recruits HIF-1α. HIF-1α/SMAD3 then mediates the transcriptional regulation of CDCA2 in hypoxic tumours, leading to cancer cell proliferation [29].

HIF’s control of the cell cycle is also mediated by its ability to induce a variety of microRNAs and long non-coding RNAs; this aspect was reviewed in [14][30].

Among all known hypoxia-stimulated transcription factors, the importance of NF-κB has been identified in a wide range of signalling systems, alongside its association with many different diseases. In contrast to its well-established role in immune and inflammatory responses, NF-κB activity is also involved in apoptosis, carcinogenic transformation, and cell cycle transition [31]. The NF-κB family consists of five distinct members, which include RelA (p65), RelB, c-Rel, NF-κB1 (p105/p50), and NF-κB2 (p100/p52), all of which share a conserved Rel homology domain [31]. Hypoxia activation of NF-κB occurs via several mechanisms, although some of the details still require further investigation. Hypoxia has been shown to control NF-κB via the action of PHDs and FIH [32][33][34], and requires the involvement of calcium/calmodulin-dependent kinase II (CAMKII), transforming growth factor kinase 1 (TAK1) and IκB kinase (IKK) [35][36][37].

NF-κB has several target genes identified with a role in cell cycle progression (reviewed in detail [31]). Ultimately, cyclin D1 provides a predominant link between NF-κB and cell cycle progression (Figure 3). Cyclin D1, in association with CDK4 and CDK6, promotes G1/S phase transition through CDK-dependent phosphorylation of retinoblastoma protein (pRB) [38]. This phosphorylation event releases the transcription factor E2F, which is required for the activation of S-phase-specific genes, although several studies have conversely reported that NF-κB can itself induce cell cycle arrest [39]. Overexpression of RelA has been shown to arrest cells at G1/S-phase transition [40]. c-Rel overexpression leads to cell cycle arrest through p53 protein stabilization, an important upstream activator of the CDK-inhibitor, p21 [41]. Additionally, p21 expression can be further increased by the Formin-2 (FMN2) protein, which is a component in the p14ARF tumour suppressor pathway [42]. In this study, FMN2 was shown to increase with hypoxia stimulation via an NF-κB-dependent mechanism [42]. Moreover, several additional studies have shown that NF-κB can be activated by a hypoxic environment [35][36][43][44].

Finally, a physical and functional interaction exists between the IKK/NF-κB signalling pathway and the cell cycle regulatory proteins of the E2F family that controls S-phase entry, which suggests that NF-κB plays a functional role in controlling cell division [45][46]. Indeed, direct phosphorylation of E2F by IKKα and IKKβ resulted in the nuclear accumulation and enhanced DNA binding of the E2F4/p130 repressor complex, which led to the suppression of E2F-responsive gene expression [45]. In contrast, E2F1 and NF-κB interactions were shown to control the timing of cell proliferation [46] (Figure 3). Despite all of these links between NF-κB and cell cycle regulation, a more systematic and mechanistic analysis of how NF-κB controls the cell cycle in hypoxia is needed.