Hyperprogressive disease (HPD) is an adverse outcome of immunotherapy consisting in an acceleration of tumor growth, often accompanied by prompt clinical deterioration.

The fundamental difference between HPD and immune-related adverse events (irAEs), which also might cause severe symptoms and a decline in the patient’s general condition, is that the latter induce damage through an autoimmune response, usually tissue- or organ-specific. By contrast, HPD is a caused by a direct stimulus for tumor growth and the deterioration is due to unspecific organ damage caused by cancer progression. Whether HPD is a specific phenomenon caused by immunotherapy or only a manifestation of the natural history of some tumors is still a matter of debate.

Even though there are minor discrepancies, most of the authors consider HPD as a swift acceleration of tumor growth and the threshold might be highly dependent on the tumor type. Criteria requiring a pre-baseline CT are probably more precise, as they are the only means to differentiate a genuine HPD from a fast-growing tumor.  The use of complementary clinical criteria might be useful to identify some HPD patients who do not fulfill radiological criteria due to non-measurable lesions or infrequent patterns of progression, although at the risk of losing objectivity.

The incidence of HPD is highly variable among the different studies, which might be conditioned by the evaluated tumor types and the criteria used for diagnosis. The neoplasms with higher incidence of HPD seem to be gastric adenocarcinoma, NSCLC and HNSCC, although the data are still scarce and there is substantial variability between studies [1].

It should be noted that in most of the clinical trials, the study groups have been HPD and non-HPD patients, this latter group also including patients with response or stabilization to immunotherapy, which might increase the differences [2][3][4]. Different clinical and analytical variables have been linked to HPD, as high neutrophil-to-lymphocyte ratio (NLR) o liver metastases. It should be noted that some of these variables have been previously associated with poor response to immune-checkpoint inhibitors (ICI), and these findings might be merely the reflection of this fact. It would be of relevance to confirm if these differences are also found when comparing HPD patients with non-HPD progressors, as explored in other works [5][6].

HPD is considered to be a systemic phenomenon, so it is reasonable to expect that it could have a reflection in systemic biomarkers that may be detectable in peripheral blood. Two studies characterized the dynamics of circulating immune cells in peripheral blood and their correlation with HPD. Both of the studies included NSCLC patients receiving PD-1/PD-L1 blockade therapies. Kim CG et al. found an association between elevated percentages of severely exhausted (TIGIT+) tumor-reactive CD8+ and HPD. ther studies have focused on alternative biomarkers such as tumor circulating DNA. A study with 56 patients monitored chromosomal instability (CI) from plasma cfDNA at different time points. A correlation of radiological response with a decrease in cfDNA before the second cycle was reported. This cohort included six cases of HPD and one patient with pseudoprogression. The changes in CI allowed an early and accurate identification of HPD in five out of six patients, even before routine radiological tests [7].

Even though many clinical, analytical and genomic aspects have been associated with HPD, the discovery of cellular and molecular mechanisms explaining this unwanted phenomenon would strongly support its recognition as an existing adverse event. Thus far, studies have uncovered some advances on this research subject. These studies describe alterations involving different cell types, suggesting that HPD is not a phenomenon with a single cause but a consequence of several events.

The first attempt to identify underlying immunological mechanisms of HPD was published in early 2019 and targeted myeloid populations. Lo Russo G et al. found a significant infiltration by M2-like CD163+ macrophages in all HPD patients in pretreatment tumor samples of NSCLC patients receiving immunotherapy. Using a murine model, the authors suggested that HPD was induced by anti-PD1 antibodies. This induction was found to be dependent on the Fc fragment, probably through its interaction with the Fcγ receptor of M2-like macrophages [8].

On the other hand, Kamada T et al. showed an enrichment in proliferating regulatory T cells (Tregs) in HPD patients, while this population was reduced in non-HPD. This study was carried out in tumor biopsies performed before and after treatment in gastric cancer patients. In agreement with high PD-1 expression in Tregs, the authors confirmed in vitro and in vivo that the immunosuppressive activity and proliferation of these cells were increased with anti-PD-1 antibodies [9].

Whether these potential mechanisms leading to HPD, if finally confirmed, are tumor-dependent or not is still unknown, Figure 1. However, when clinical contexts where the patients receiving ICI are at higher risk of developing HPD are identified, combination approaches based on this information could provide a significant advance to prevent fast progression or death caused by HPD. 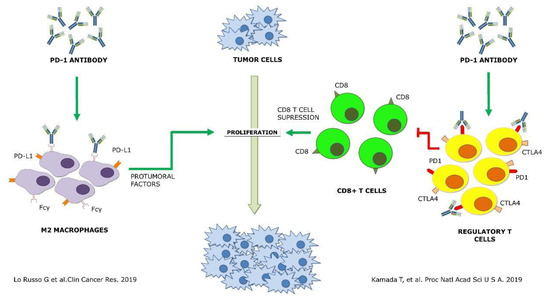 At the present moment, HPD is only considered a radiological event induced by one or several mechanisms. As its identification is subject to the many limitations of radiological evaluation, the study of the implications regarding patients’ prognosis is of significant medical importance. As expected, most of the clinical trials have shown lower progression-free survival (PFS) in HPD patients. In HNSCC patients, it was 2.5 months, and in non-HPD patients, (including 12% of responders) it was 3.4 months (p = 0.003). When applying irRECIST criteria, it was 2.9 vs. 5.1 months, respectively (p = 0.02) [10].

Vast evidence indicates that immunotherapy might have a deleterious effect on some cancer patients, even accelerating the spread of their disease. Further research is warranted to confirm the underlying mechanisms described thus far, and to explore other possible molecular processes inducing this paradoxical response to ICI.  As certain immune subpopulations have been identified as potentially responsible for HPD, its targeting with drug combinations could be a practical approach. However, it should be kept in mind that it is still not clear if the HPD mechanisms described do occur simultaneously or, on the contrary, are mutually exclusive. Furthermore, they could even be tissue-dependent, hence making this strategy much more complex.

Anyhow, before any experimental strategy to prevent HPD is proposed, additional research that identifies the cellular and molecular mechanisms underlying this phenomenon, as well as the clinical and pathological context where it occurs, is clearly required. A greater implication from immuno-oncology studies of promoters and awareness of this outcome from clinical researchers will be key to fulfilling this objective.