Viral respiratory infections are recognized risk factors for the loss of control of allergic asthma and the induction of exacerbations. Severe asthma is more susceptible to virus-induced asthma exacerbations, especially in the presence of high IgE levels.

Asthmatic exacerbations consist of episodes characterized by an increase in respiratory symptoms (dyspnoea, cough, wheezing, chest tightness) and worsening of lung function requiring changes of therapy, the intake of oral corticosteroids (OCS), emergency treatment, and hospitalization in the most severe cases [2][3]. In terms of pulmonary function tests, asthma exacerbation is defined as a >20% reduction in FEV1 (Forced Expiratory Volume in 1 s) from baseline or a >30% reduction in peak expiratory flow (PEF) for 2 consecutive days. Asthmatic exacerbations can accelerate the decline in lung function and increase the risk of subsequent exacerbations [2][3][7].

During immune responses to viruses, an initial activation of innate immunity typically occurs and the production of type I and III interferons (IFN-α/β and -λ, respectively) is essential in the control of viral spread. Plasmacytoid dendritic cells (pDCs) are the primary blood source of IFN-α [8]. It is known that a reduction in the production of IFN by pDCs and epithelial cells is frequent in atopic patients, with a consequent delayed and inefficient antiviral defence [9]. Another important aspect is that the intensity of the response to IFN-α after the ex vivo viral challenge of pDCs is inversely related to serum IgE levels. This evidence suggests that pDCs antiviral responses may be suppressed in atopic patients. In fact, asthmatics show great susceptibility to respiratory viral infections, which are often a trigger for exacerbations [10].

However, the inflammatory Th2 environment appears to be able to favor viral infections, through the altered release of IFN-α in the peripheral blood mononuclear cells (PBMCs) of asthmatic patients, the reduction of NF-kB and the lack of activation of Toll-Like Receptor (TLR)7 and TLR8. In contrast, Th2 inflammation appears protective against SARS-CoV-2 infection [11].

Furthermore, the real role of eosinophils in the context of infections has not been precisely established yet. Eosinophils are reduced in peripheral blood from SARS-CoV-2 infected patients [12]. Eosinophilic cells blood count seems to have a major role in COVID-19 diagnosis and prognosis. Eosinopenia has been associated in up to 81% of cases and was proposed as a possible diagnostic marker for the disease. Persistent eosinopenia was associated with higher mortality [13]. Numerous and recent studies showed that eosinopenia was present in patients with severe COVID-19 phenotypes and in many cases with fatal evolution [14][15][16][17].

The pathophysiology of eosinopenia in COVID-19 has not been fully clarified yet, but it is probably multifactorial. Possible explanations concern the inhibition of eosinophils egress from the bone marrow, the blockage of eosinophilopoiesis, the reduced expression of chemokine receptors and adhesion factors and finally the direct eosinophilic apoptosis induced by type 1 IFN released during acute infection [18][19].

As for now, literature data, although limited and preliminary, show that severe asthma patients treated with biologics don’t have an increased risk of SARS-CoV-2 infection or progression to severe forms compared to the non-asthmatic population [20]. These data, in agreement with other international assessments, indicate that treatments with biologics during the COVID-19 pandemic appear to be safe and can be continued in patients with severe allergic asthma, interrupting it only in case of confirmed SARS-CoV-2 positivity [21] and up to negativity of the nasopharyngeal swab [20][21][22].

3.1. Impact of Monoclonal Antibodies for Severe Asthma on Viral Infections

A study showed that mepolizumab had no clinical effects in terms of immune response to this infection [23]. A patient with severe eosinophilic asthma, who had been receiving benralizumab for two years, had a confirmed SARS-CoV-2 infection. The course of COVID-19 was very mild, with a rapid and complete resolution of the clinical picture [24].

3.2. Effect of Omalizumab in Patients with Severe Allergic Asthma and Respiratory Viral Infections

Omalizumab was the first biologic drug authorized for clinical use for the treatment of severe allergic asthma refractory to maximally dosed standard therapies. In addition to the effects described above, recent studies showed that omalizumab was able to improve the antiviral response in subjects with allergic asthma, otherwise inadequate; these patients are more susceptible to virus-induced asthma exacerbations, especially those with elevated IgE levels [21]. By sequestering IgE, omalizumab also positively influences aspects of the innate immune response to viral respiratory infections, which is deficient in patients with severe allergic asthma [25][26][27]. People with severe allergic asthma are more susceptible to respiratory viruses (85% of children and 50% of adults) and more likely to experience virus-induced asthma exacerbations, which are more severe in the presence of elevated IgE levels [28][25][26][27][29][30] (Figure 1). 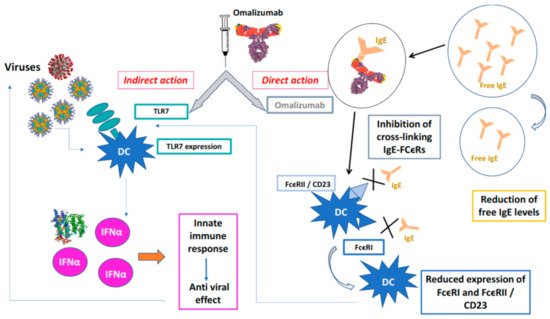 Patients with severe asthma and viral infections (not only in paediatric age) appear more susceptible to exacerbations, especially during fall, leading to significant consequences: greater morbidity, higher healthcare costs and disease progression [31]. The efficacy of omalizumab in improving antiviral response and consequently reducing potentially virus-induced seasonal exacerbations has been demonstrated in several clinical trials conducted in both adult/adolescent patients and paediatric populations with moderate-to-severe allergic asthma.

All mAbs currently used for the treatment of severe asthma are considered to be safe even in this historical moment with an important risk of viral infections, in particular from the SARS-CoV-2. Despite the fears that emerged during the initial stages of the pandemic, asthma is not a disease that carries a risk of developing severe forms of COVID-19. Biologics for severe asthma are all effective, they are carefully chosen and are safe for viral infections. An important and still not fully understood problem is the management of patients with severe asthma during the COVID-19 pandemic.