The Androgen Axis in CRPC

Understanding the molecular mechanisms underlying prostate cancer (PCa) progression towards its most aggressive, castration-resistant (CRPC) stage is urgently needed to improve the therapeutic options for this almost incurable pathology. Interestingly, CRPC is known to be characterized by a peculiar hormonal landscape. It is now well established that the androgen/androgen receptor (AR) axis is still active in CRPC cells. The persistent activity of this axis in PCa progression has been shown to be related to different mechanisms, such as: intratumoral androgen synthesis, AR amplification and mutations, AR mRNA alternative splicing, increased expression/activity of AR-related transcription factors and coregulators. A deeper clarification of the expression and activities of the androgen/AR axis in the CRPC stage will likely lead to the identification of novel predictive biomarkers as well as to the improvement of the therapeutical options for this almost untreatable disease, in terms of precision medicine.

Prostate cancer (PCa) still remains the second leading cause of cancer-related deaths in Western countries, although a higher survival rate and a long-term decline in mortality have been recently reported [1]. Most PCas are androgen-dependent in their early stage, and androgen deprivation therapy (ADT), aimed to reduce the circulating levels of testosterone and achieved by chemical castration, still represents the standard care of treatment [2][3][4]. Gonadotropin-releasing hormone (GnRH) analogs (agonists and antagonists), responsible for the suppression of testicular androgen production, are often associated with inhibitors of androgen receptor (AR) activity to obtain a maximal androgen deprivation condition (combined androgen blockade, CAB) [5][6]. Unfortunately, within 2–3 years, most patients progress towards the so called castration-resistant prostate cancer (CRPC) stage, characterized by tumor growth, even in the presence of castration levels of circulating androgens [7][8].

It is now well established that the androgen/androgen receptor (AR) axis remains a key player in the growth of CRPC [9][10][11][12][13]. Moreover, not only steroids but also peptide hormones and their receptors are deeply involved in the process of PCa progression. Gonadotropin-releasing hormone (GnRH) is the hypothalamic decapeptide known to be a key player in the functions of the pituitary gonadal axis through the activation of its pituitary receptor (GnRH-R) [14][15][16][17][18][19]. GnRH and GnRH-Rs are also expressed in different cancer cells and tissues, including PCa, both androgen-dependent and castration-resistant; the activation of these receptors is associated with a significant antitumor activity [20][21][22][23][24][25][26][27][28][29][30][31][32][33][34].

2. The Androgen/AR Axis in CRPC

Second-line antiandrogen therapy is indicated for the treatment of CRPC patients, supporting the idea that the androgen/AR axis is still active in this progression phase of the tumor [35][36][37][38][39][40][41]. To date, several mechanisms involving a persistent activity of the androgen/AR axis in CRPC have been elucidated [12][13][42][43][44].

About two decades ago, it was reported that, after ADT therapy, intratumoral levels of androgens remain high in spite of serum castration levels of testosterone [45]. This observation suggested that circulating adrenal androgens might be uptaken by CRPC cells to be converted to testosterone and dihydrotestosterone (DHT). Subsequently, it was demonstrated that CRPC tissues overexpress both 3β-HSD, the enzyme responsible for the conversion of the adrenal steroid dehydroepiandrosterone (DHEA) to androstenedione, and AKR1C3 (17β-HSD), the enzyme involved in the conversion of androstenedione to testosterone and DHT and, therefore, to active androgens [46][47][48]. Transcription factors regulating the expression of genes involved in androgen biosynthesis are also expressed in CRPC cells [49].

It has also been suggested that, in CRPC tissues, androgens can be synthesized from cholesterol; however, this issue is still a matter of debate [48][50]. CYP17A1, the enzyme involved in the synthesis of DHEA and androstenedione, is expressed not only in the adrenal gland but also in PCa tissue [47][50]; treatment options for CRPC patients presently include abiraterone, a specific inhibitor of CYP17A1 activity [51][52][53].

CRPC tissues (about 80%) from patients who progressed after ADT express high levels of AR; 30–50% of these tissues were reported to carry AR amplification, due to the presence of a high AR gene copy number [54][55][56]. AR amplification was also detected in circulating tumor cells (CTCs) from patients with metastatic PCa [57]. The overexpressed receptor is sensitive to low levels of androgens, thus allowing PCa cells to progress towards the CRPC stage. Interestingly, AR amplification has been found to be more common in enzalutamide than in abiraterone-resistant patients [58][59].

The AR gene, belonging to the steroid hormone receptor superfamily, composed of eight exons, is mapped on chromosome Xp11-12 and encodes a 110 kDa (920 amino acids) protein. The full-length AR protein consists of three domains: the NH2-terminal transactivation domain (NTD, encoded by exon 1), the central and conserved DNA-binding domain (DBD, encoded by exons 2 and 3), a flexible hinge region containing a nuclear localization signal and the COOH-terminal ligand-binding domain (LBD, encoded by exons 4–8). The NTD domain contains two trinucleotide repeats that encode polyglutamine and polyglycine tracts. The interaction between NTD and LBD is necessary for the receptor transcriptional activity. In the absence of androgens, the AR is located in the cytoplasm, where it is present in an inactive conformation associated with heat shock proteins. Once bound by androgens (testosterone, DHT), the receptor translocates into the nucleus, where it is activated through dimerization, recruitments of coregulatory/epigenetic factors and stimulation of specific target genes [12][13][43][60][61][62].

Gain-of-function mutations of the AR are quite frequent (about 50%) in CRPC patients after antiandrogen therapy; these are usually single point mutations occurring mostly in the LBD of the receptor [63][64]. The T878A mutation, with alanine being substituted by threonine, was shown to confer resistance to both first- and second-generation antiandrogens (enzalutamide, apalutamide, darolutamide); similar observations were reported for the H875Y, W742C and F876L mutations [58][65][66][67][68][69]. Interestingly, by binding to these mutant receptors, antiandrogens can induce their activation, thus behaving as AR agonists; moreover, these mutations were also shown to be activated by different steroids, such as adrenal androgens, progesterone and estrogens [70][71][72]. Consequently, AR mutations are responsible for the continuous activation of the receptor even in the presence of low circulating androgen levels after ADT therapy, thus playing a key role in tumor progression. Some gain of function mutations were shown to favor the recruitment of coregulators to the promoter region of AR target genes, thus increasing the transcriptional activity of this receptor [73][74].

Recently, mutant AR receptor genes were reported to be easily detectable in cell-free DNA (cfDNA) obtained from CRPC patients. These data strongly support that the presence of specific circulating mutant ARs can represent a useful biomarker in terms of personalized therapy in CRPC [58][75][76][77].

The most frequent mutations of the AR in CRPC patient tissues and plasma (cfDNA) are reported in Figure 1.

During the last two decades, it has become increasingly clear that, in PCa cells, the AR gene can undergo alternative splicing, giving rise to different splice variants (AR-Vs) [78][79][80][81][82]. Most of these variants lack the LBD but maintain the ability to enter the nucleus and to bind specific DNA response elements in a ligand-independent manner. Specifically, AR-V7 is truncated at the end of exon 3, but it has been demonstrated to be localized at the nuclear level and to retain constitutive transcriptional activity in the absence of the ligand [83]. The expression of AR-V7 was found to be associated with the development of drug resistance (enzalutamide, abiraterone) and aggressive behavior in CRPC cells [84]. In nude mice harboring human CRPC cell xenografts, treatment with abiraterone significantly increased AR-V7 expression while AR-V7 overexpression promoted tumor growth and invasiveness [85][86]; in line with this observation, targeting this receptor variant was reported to suppress tumor growth and to confer sensitivity to antiandrogens (enzalutamide) [87]. In humans, the expression of AR-V7 was observed in tumor biopsies from CRPC patients and significantly correlated with tumor progression and short survival [88][89][90][91][92]. High levels of AR-V7 could also be detected in extracellular vesicles purified from the plasma of CRPC patients, as well as in circulating tumor cells (CTCs) from enzalutamide- or abiraterone-resistant patients, and were found to be associated with a poor prognosis [93][94][95][96][97].

Additional transcript variants are generated by alternative splicing of the AR gene in CRPC [13][98][99]. In particular, the ARv567es splice variant originates from the loss of exons 5–7, encoding the LBD, but it conserves the hinge region of exon 4 involved in the nuclear localization of the receptor isoform, thus supporting its constitutive activity irrespective of the presence of the ligand; its expression was shown to increase in tissue biopsies after ADT therapy, and to correlate with outcomes to taxane therapy in CTCs, in PCa patients [88][100][101].

Mechanistically, the AR-Vs can form homodimers or heterodimers (by combining with other variants), or they can dimerize with the full-length AR. At the nuclear level, the dimers bind to response elements in the promoter region of specific downstream genes (either unique or canonical AR-regulated genes), thus modulating their expression and promoting the development of CRPC [13][42][89][91][102].

Based on these observations, targeting the AR-Vs and their signaling pathways might represent a novel and effective therapeutic strategy for the treatment of CRPC patients.

FOXA-1 (forkhead box A1) is another pioneer transcription factor involved in AR-promoted gene transcription. It was demonstrated to play a key role in AR-mediated tumor growth and progression in CRPC cells [108]. Mechanistically, FOXA1 binds to AR and the transcription factor HOXB13 at the cytoplasmic level; then, the FOXA1-AR-HOXB13 complex translocates into the nucleus where it binds, with the cooperation of GATA2, to specific DNA sequences. FOXA1, HOXB13 and GATA2 open compacted chromatin, increasing the accessibility of these DNA regions to additional transcription factors, thus promoting AR transcriptional activity and the expression of AR-regulated genes [42][108][109][110].

Coregulators modulate the activity of several proteins in the transcription complex through chemical modifications and are also involved in the recruitment of general transcription factors associated with RNA polymerase II to the constitutive promoter of target genes [106][111]. Specifically, the p160 steroid receptor coactivators (SRC-1, SRC-2 and SRC-3) promote the formation of a complex between AR enhancer sequences and the promoter region of androgen target genes, thus favoring AR transcriptional activity [112]. SRCs expression was found to positively correlate with PCa progression and recurrence [113][114][115]. Importantly, in PCa cells, SRC-2 was reported to interact with AR at the nuclear level to increase the sensitivity of cancer cells to androgens and to enhance the ligand-independent transcription of AR target genes [116][117]. Similarly, the AR coactivator MAGE-11 (melanoma antigen gene protein-A11) was shown to be overexpressed in CRPC cells as a consequence of the hypomethylation of CpG islands in its promoter region, providing an additional mechanism for the increased AR signaling in CRPC [118].

Taken together, these observations support the notion that the interaction of AR with specific transcription factors and coregulators plays a key role in promoting PCa growth and progression. These mechanisms are presently considered a possible molecular target for novel therapeutic approaches for CRPC.

The most relevant molecular mechanisms underlying the persistent activity of the androgen/AR axis in CRPC cells are summarized in Figure 2. 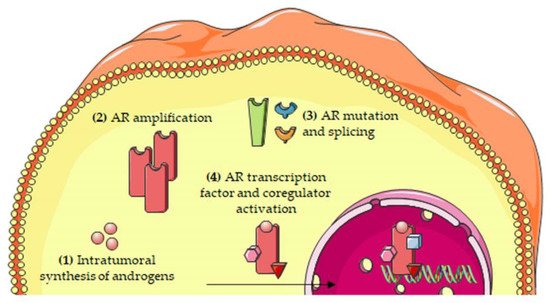 Figure 2. Molecular mechanisms involved in the persistent activity of the androgen/AR axis in CRPC cells. The persistent activation of the androgen/AR axis has been attributed to several mechanisms, including: (1) intratumoral synthesis of androgens; (2) AR amplification; (3) AR mutations and alternative splicing; and (4) increased expression/activity of transcription factors and coregulators of the AR. Abbreviations: AR, androgen receptor.