Diagnostics and Therapeutics in Sepsis

Sepsis is a clinical syndrome resulting from a dysregulated inflammatory response to infection. In 2017, an estimated 48.9 million cases of sepsis accounted for 11 million (19.7%) deaths worldwide [1]. In 2013, in the United States alone, sepsis accounted for $24 billion in hospital expenditures with the financial burden rising significantly over the subsequent 5 years [2][3].

Delayed identification and incorrect treatment lead to worse outcomes, increased costs, and higher mortality [2]. Managing sepsis in the contemporary era revolves around early diagnosis, administration of antimicrobials, hemodynamic support with fluids and vasopressors, and source control via procedural drainage and removal of the inciting pathogen. While these interventions have led to a decrease in hospital mortality, significant shortcomings in early recognition and treatment of the underlying cause of sepsis remain: the biomolecular triggering and subsequent inciting of an uncontrolled inflammatory response [4]. Overreliance on culture data delays identification of an infectious etiology and increases the possibility of inappropriate antimicrobial selection. The downstream effects of delayed or inappropriate antimicrobials include emerging antimicrobial resistance, medication toxicity, adverse microbiome alterations, and ineffective therapy.

While source control on the macro scale is important, the trigger of the pathological inflammatory cascade in sepsis ultimately occurs at the molecular level. The complex interaction between infectious molecules and the immune system is often overlooked in present-day management of sepsis. Innovations that prevent or attenuate this pathological interaction, as well as novel supportive therapies that provide time for patients to recover, are essential to improve outcomes in sepsis.

According to the Third International Consensus Definitions for Sepsis and Septic Shock (Sepsis-3), sepsis is defined as life-threatening organ dysfunction caused by the dysregulated host response to infection [5][6][7]. Early identification and diagnosis are essential, as prompt and appropriate treatment can improve survival [8]. Sepsis may result from any type of infection (most commonly bacterial) that affects the body (most commonly the lungs or urinary tract). In contrast, viral sepsis is caused by a viral infection (e.g., influenza) that also carries the potential for superimposed bacterial infection. The year 2020 highlighted the devastating impact of virally-mediated sepsis, triggered by severe acute respiratory syndrome coronavirus 2. Our review focuses mainly on contemporary novel diagnostics and therapeutics in bacterial sepsis identified in the literature search covering a one-year period (November 2019–November 2020).

Limited resources are currently available to aid in early diagnosis of sepsis. Though blood cultures can occasionally identify the responsible pathogen and direct later antimicrobial therapy, their inability to yield timely results limits their role in the initial diagnostic process. Several molecular approaches have been developed in order to improve conventional culture-based identification, including PCR and matrix-assisted laser desorption ionization–time of flight (MALDI–TOF) mass spectrometry. Although MALDI–TOF may decrease the time to result to as early as two and half hours once the blood cultures become positive [9][10], a broader clinical evaluation of this approach is still missing. Recent data suggest that transcriptomic profiling by multiplexed quantitative PCR (qPCR) and metabolite detection by liquid chromatography-tandem mass spectrometry (LC-MS/MS) have potential in the clinical development of diagnostic tests capable of overcoming the limitations of single molecules to differentiate between infectious and noninfectious causes of systemic inflammation [11].

Various clinical scoring systems, such as the sequential organ failure assessment (SOFA) score, exist to assist with the diagnosis of sepsis [5][7][12]. Although SOFA is one of many such tools, may help identify patients with increased risk of death, and is utilized in the current sepsis definitions [5], it is by no means specific for infection or sepsis [3].

Some biomarkers, such as C-reactive protein (CRP) and procalcitonin (PCT), have been widely used as an acute phase reactant in critically ill patients, but their diagnostic and prognostic values for sepsis are limited [13][14][15]. In a retrospective cohort study in critically ill patients fulfilling the Sepsis-3 criteria, the diagnostic accuracies of PCT and CRP insufficiently predicted proven infection, with no difference in decrease in both markers in 28-day survivors and nonsurvivors [16]. However, the multicenter, open-label, Procalcitonin-guided Antimicrobial Therapy to Reduce Long-Term Sequelae of Infections (PROGRESS) trial in 266 patients meeting Sepsis-3 criteria demonstrated that PCT-guided therapy, as compared to standard care, yielded a significantly reduced mortality [17]. With more than 100 biomarkers already described and proposed for sepsis [18], defining which marker may be useful to optimize diagnostics and therapeutic strategies remains a challenge.

A recent comprehensive review identified 5367 studies investigating the use of biomarkers in relation to sepsis [18], with a total of 80 new individual biomarkers emerging over the past decade. Of these 80, a mean of 21 biomarkers were assessed specifically for the diagnosis of sepsis in basic research studies, clinical studies, and studies combining both approaches. We attempted to categorize the various biomarkers according to pathophysiological roles (Figure 1), although for many, identifying a single clear role was not possible. While many studies have validated a multibiomarker-based risk model that estimates mortality probability in adults with septic shock [19], we focused on clinical studies in adults over the past year that compared biomarkers in different sepsis-related pathways. Table 1 summarizes different novel biomarkers reviewed below in detail. 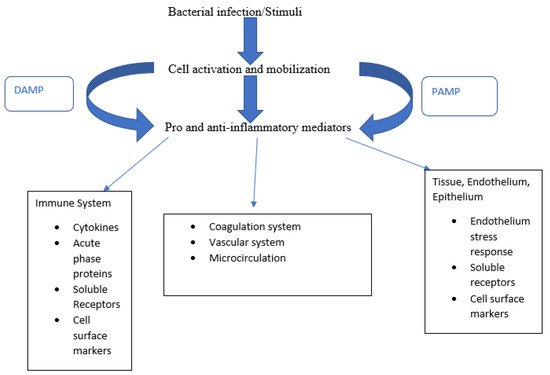 Figure 1. Biomarkers sorted according to their pathophysiological role. Bacterial stimuli cause cell activation and, along with PAMPs and DAMPs, release pro-inflammatory mediators triggering a broad host response.

Table 1. Summary of biomarkers for novel therapeutics for sepsis.

The mainstay of therapy in sepsis revolves around two broad principles: (1) source control to remove the infectious stimulus and (2) resuscitation optimization to both attenuate the pathologic inflammatory response and provide end-organ support. Current source control therapies include antimicrobial administration and procedural interventions to reduce the pathogenic burden [20]. Unfortunately, these therapies incompletely address the integral role of infectious molecular triggers to incite and propagate the characteristic inflammatory cascade of sepsis that manifests itself to different degrees according to each patient’s unique immune system and biochemical milieu. Meanwhile, supportive care is often limited to the implementation and titration of therapies such as intravenous fluids, vasopressors, mechanical ventilation, and renal replacement therapy (RRT). Comprehensive application of the correct combination of the above therapies in a timely manner improves outcomes in sepsis. We discuss novel therapies (Table 2) that target the pathogen burden and those that target the host by attenuating the adverse effects of the molecular triggers of inflammation to support patients until recovery.

Table 2. Summary of benefits, concerns, and current phase of clinical trials for novel therapeutics for sepsis.