To minimize excess water usage, alternate wetting and drying (AWD) irrigation practice is considered as an efficient technique in which soil intermittently dried during the growing period of rice by maintaining yield compared to a flooded system. Continuous AWD may result in poor soil health caused by carbon loss, nutrient depletion, cracking, and affecting soil physical properties. Due to being a potential organic amendment, biochar has a great scope to overcome these problems by improving soil’s physicochemical properties.

Rice is one of the most widely grown cereals globally. Generally, above 75% of rice is produced under the continuous flooded irrigation system throughout its growing season and this irrigation system wastes a huge amount of water through seepage, percolation, and evaporation [1]. In this situation, farmers face challenges to produce rice with limited irrigation due to the increasing water scarcity for agriculture because of climate change and fast industrialization and urbanization [2]. Thus, it is crucial to adopt a substitutional irrigation system to save water without affecting rice yield under this climatic condition. To counteract this water scarcity of irrigation, International Rice Research Institute (IRRI) generated the technology of alternate wetting and drying (AWD) irrigation system for rice [3]. In AWD irrigation system, water is allowed to evaporate before the next irrigation and when the water level reaches 150 mm (−15 to −20 kPa matric potential) below the soil surface re-irrigated to a ponding water depth of 50 mm to monitor the water level below the soil surface employs a field water tube (Figure 1) [3]. 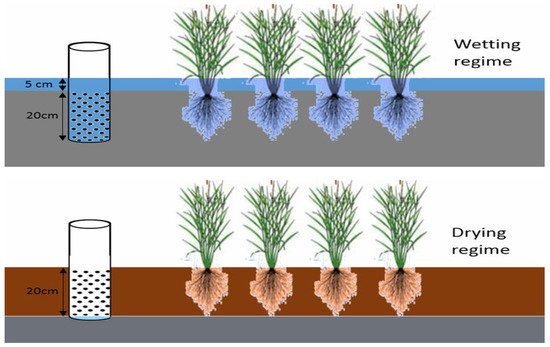 Biochar is one of the most universally used organic amendments—carbon-rich porous material produced by the thermal decomposition of organic residue under limited oxygen conditions and comparatively at low temperature (below 700 °C) in a sealed container [5]. Enrichment of soil by biochar exerts favorable hydrological properties of soil for crop production and improves soil structure, porosity, and erosion [6][7]. By applying biochar, soil enriched by organic matter results in increased carbon content and adds nutrients such as nitrogen, potassium, phosphorus, and magnesium [8][9][10][11].

In AWD soil, it is periodically irrigated when the soil dries and reflooded to 5 cm and maintains flooded and non-flooded conditions [12] causes swelling and shrinkage and generates cracking in the surface of paddy soil [13] because water is discharged from the clay microstructures. Hydrological soil properties are extensively altered by cracking characteristics as broad and deep cracks transfer the water rapidly from surface to subsoil [14]. The increase in the presence and intensity of cracks can boost water’s percolation by allowing quicker and more comprehensive seepage of water [15]. This leaching of water to below root zone causes scarcity of moisture to the shallow-rooted plant species [16]; as a result, water productivity is decreased [12].

3. Effect of AWD on Organic Carbon and Nitrogen Depletion

AWD irrigation system soils are saturated intermittently after a certain drying period, which poses recurring aerobic soil conditions [17]. Compared to continuous flooding irrigation, AWD provides more oxidizing conditions in the soil. This phenomenon may stimulate the decomposition of plant residue and organic matter in the soil, especially in rice’s vegetative growth stage [18]. This instance may generate increased CO2 emissions from the soil by decaying organic matter and declining organic matter status in soil [19]. In the dry period of AWD, aerobic condition prevails and takes place heterotrophic respiration in the soil; this leads to enhanced soil organic carbon (SOC) mineralization process [20], which likely transforms paddy soil from carbon sinks to sources [21]. There is a positive and linear relationship between precipitation and SOC [22]; flooded rice systems may accumulate higher SOC compared to periodically irrigated paddy fields.

A theatrical change proceeds in the physical condition of soil under the AWD system. The transformation between the aerobic and anaerobic environment in soil controls the microbial activity, including mineralization, nitrification, and denitrification, which affects N leaching and availability [14]. However, AWD-imposed intermittent aerobic and anaerobic environments in topsoil may alter NH3 volatilization and N leaching from paddy soil [23].

During AWD at the drying stage, the soil shrinks and creates desiccated cracks on the topsoil that allow for preferential flow and loss of nutrients [24][14]. During this stage, nitrate content increased in the soil due to the enhanced nitrification rates, although rice roots need significantly higher energy to assimilate NO3-N compared to NH4-N [25].

4. Potential of Biochar to Influence Different Chemical Properties of Soil

The application of plant residues can increase soil organic carbon. The rapid decomposition rate turnover of these organic residues occurs very fast, and thus, carbon added from the plant residue is discharged into the atmosphere quickly [26]. By converting these plant residues to biochar through pyrolysis, carbon could be stored for thousands of years due to the pyrolysis temperature converting C into a further stable and recalcitrant form [27], which ultimately improves soil health by enhancing soil fertility [28]. Thereby, biochar is treated as a C source and a sink of C in the soil [29].

Biochar provides a good source of P, due to the high volatilization temperature, i.e., >700 °C; the residual concentration of P is around 0.4% in the biochar produced in higher temperature [35]. Pyrolysis of biochar feedstocks causes volatilization of many nutrients, while large K reserved content and transformed into highly soluble K salts [36]. Biochar addition increased the available K in soil due to its high ash content and adsorbs K ion to reduce leaching loss [37][38].

4.3. Capacity of Biochar to Retain Nutrients in Soil

Biochar directly absorbed plant nutrients from the crop, but within few soil interactions, some nutrients were slowly released into the soil, and thereby biochar enriched the nutrient source of soil for plant uptake [39]. Properties such as porous structure, large surface area, higher charge density, and polar and nonpolar sites in the surface of biochar enhance its potential to absorb nutrients and enrich the soil fertility and reduce leaching loss of nutrients [40].

Generally, the following mechanisms are responsible for nutrient retention and reduced nutrient leaching capacity of biochar: (i) biochar has unique surface chemistry, i.e., presence of acidic functional group on biochar surface formed during oxidation procedure prompt the nutrient retention by cation exchange (Figure 2); thus, most of the cations, e.g., K, Na, Ca, and Mg are retained on the biochar surface [41]. 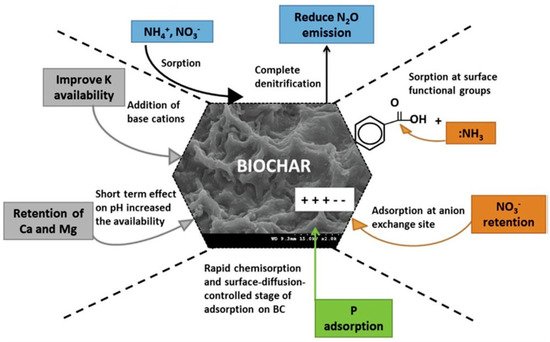 5. Impact of Biochar on Physical and Hydrological Properties of Soil

Physical health of the soil is defined as the soil’s capacity to provide plants’ needs for aeration, moisture, and strength, which protect and reclaim the soil from the processes that might abate that capacity [43]. Biochar is an organic amendment characterized by high porosity, and application of this material into soil explicitly adds new pores and promotes the soil’s physical properties including porosity, density, pore size distribution, water retention, and moisture content [44].

Efficient use of water is one of the important issues for sustainable rice production under changing climatic conditions; AWD is one of the effective irrigation approaches. However, due to repeated transition between moistening and desiccation of soil in the AWD irrigation system of rice results in cracking through which nutrients preferentially losses from the topsoil; soil also loses extra surface moisture during the desiccated condition. Under this alternative aerobic and anaerobic ecosystem, native organic carbon and nitrogen of soil might be lost due to heterotrophic microbial activities. This negative impact of AWD irrigation in rice may not be visible in the short-term studies, but in the long term, it perhaps declines soil productivity. Enrichment of soil organic carbon plays a significant role in the soil’s physical and chemical properties and ultimate climate-smart crop productivity. The implication of biochar incorporation under this water-saving irrigation may effectively alleviate this hindrance. This review discussed biochar’s potential and its mechanisms involved in interacting with soil consecutively improving physicochemical properties and water retention. The reviewed studies can be opined that biochar has a large surface area with a highly developed pore structure, enriched by exchangeable nutrient elements. For instance, biochar may increase soil fertility by providing essential nutrients to the soil, reduce nutrient leaching through adsorbing in exchangeable sites, and increase soil pH due to its high liming contents. Furthermore, biochar addition enhances soil moisture retention due to its large surface area and storing water in its pore structure, which ultimately may result in increased water use efficiency of rice. The bulky and porous structure of biochar, with the high carbon content, enhances soil physical properties such as density, porosity, aggregation, etc. when interacting with soil; but mostly, application rates such as 1 to 5% is not realistic for this improvement. Nevertheless, biochar possibly improves soil fertility and productivity in AWD water-saving irrigation, but further research is required for economic viability and considering its combined application with chemical fertilizers for sustainable rice production.