Aging is a fundamental biological process accompanied by a general decline in tissue function. Indeed, as the lifespan increases, age-related dysfunction, such as cognitive impairment or dementia, will become a growing public health issue.

Nowadays, the population and life expectancy of humans are significantly increasing, due in large part to improvements in nutrients, medicine and environments, etc., which results in a decrease in mortality from age-related diseases, such as heart disease, cancer and stroke [1]. The world’s total population was about 6.76 billion in 2008, and the number increased to 7.59 billion in 2018. Sixteen percent will be over the age of 65 by 2050, up from 9% in 2019 in the world, suggesting that the age group of 65 and over is growing the fastest. Aging is a fundamental biological process accompanied by a general decline in tissue function and increased risk for many age-related diseases. According to the National Council on Aging, about 92 percent of the elderly have at least one age-related disease and 77% have at least two. Heart disease, ischemic stroke, cancer and diabetes are among the most common disorders. For example, as the lifespan increases, cognitive impairment or dementia will become a growing public health issue. According to current estimates, almost 36 million people have dementia worldwide, and this number is expected to reach 66 million by 2030 and 115 million by 2050 [2]. The population with dementia is expected to increase to a total of over 13 million in the United States alone. The most well-known form of dementia is Alzheimer’s disease (AD), but a large percentage of aged cognitively impaired persons are not due to AD but, rather, the normal aging process. The vast majority of older adults suffer declines in cognitive functions, interfering with their ability to participate and engage in meaningful activities [3]. In addition to AD, deterioration in fine motor control, gait and balance are among the most important health problems in the elderly. Now, falls are the leading cause of injury-related death and the third-leading cause of poor health among persons aged 65 years and older [4]. In 2013, the cost of these injuries caused by falls was US $34 billion. Thus, there is a critical need in understanding underlying cellular and molecular mechanisms regulating aging, which will allow us to modify the aging process for healthy aging and alleviate age-related disease.

AMPK (a serine/threonine protein kinase) is an essential energy sensor engaged in modulating our whole-body level of metabolic energy balance [5][6]. In mammals, AMPK comprises of two isoforms of the α and β subunits each and three isoforms of the γ subunits to form a combination of 12 different αβγ isoforms. The α subunit encodes an N-terminal protein kinase domain, which interacts with a C-terminal regulatory domain via its well-known activation segment threonine 172 (T172) to mediate AMPK’s catalytic activity. The β subunit has a carbohydrate-binding module (CBM), and its C-terminal domain connects the γ subunit and the C-terminal domain of the α subunit. The γ subunit holds four cystathionine-β-synthase (CBS) regions referring to adenine nucleotide binding, which ensures the monitoring and regulation for AMP/ATP ratio [7][8][9]. Both the β (β1 and β2) and γ (γ1, γ2 and γ3) subunits regulate AMPK’s phosphorylation and activity. Traditionally, AMPK signaling is one of the central regulators of cellular and organismal metabolism in eukaryotes, playing important roles in regulating growth and reprogramming metabolism. Recently, AMPK signaling has been connected to aging and the lifespan, as AMPK can control the regulation of cellular homeostasis, resistance to stress, cell survival and growth, cell death and autophagy. Supportively, specific AMPK activation protects against aging and extends the lifespan in Caenorhabditis elegans (C. elegans) and rodents.

Sirtuin (SIRT) was first discovered in the 1970s in nature and is an essential factor in delaying cellular senescence and extending organismal lifespan [10]. SIRT1 is the most well-studied among the seven SIRT isoforms in humans [11]. SIRT1 is an NAD+-dependent deacetylase and, thus, can deacetylate tumor suppressor p53 protein [12][13], the DNA repair factor Ku70 [14], NF-κB [15], the signal transducer and activator of transcription 3 (STAT3) [16] and the FOXO family of forkhead transcription factors (Figure 1). The roles of Sirtuin on the suppression of cellular senescence is primarily mediated through delaying age-related telomere attrition, sustaining genome integrity and promoting DNA damage repair. SIRT1 can improve the ability to induce cell cycle arrest and oxidative stress resistance and inhibits cell death [17] and apoptotic pathways [18]. It has been verified that Ku70 blocks the death of stress-induced apoptotic cells by sequestering the proapoptotic factor Bax away from the mitochondria. NF-κB is involved in upregulating gene products controlling cell survival. SIRT1 participates in many age-related processes and disorders, such as neurodegenerative diseases and cardiovascular diseases, etc. [19]. 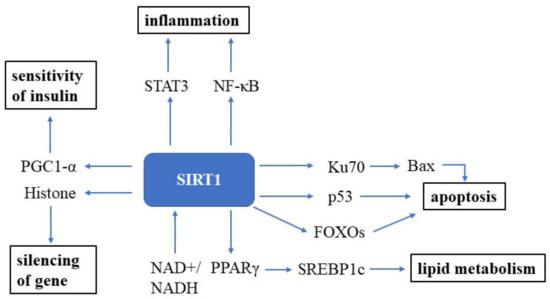 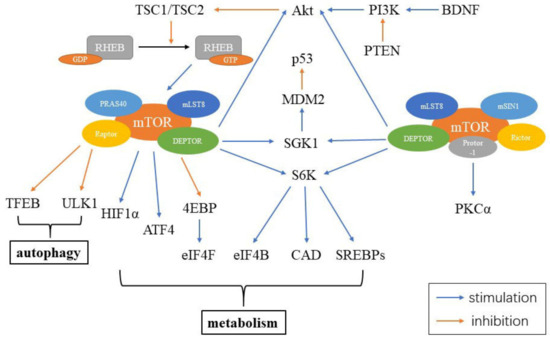 5. Interplay between the AMPK, SIRT1 and mTOR Signaling Pathways

AMPK, SIRT1 and mTOR can also interact with each other, forming an intertwined web. For example, AMPK and SIRT1 increase the expression of Atgs by upregulating FOXOs and PGC-1α and downregulating mTORC1 [24]. Wang et al. showed that the antiaging effects of resveratrol in zebrafish retina involved the activation of the AMPK, SIRT1 and mTOR signaling pathways [25].

5.1. Crosstalk between AMPK and SIRT1 Signaling

SIRT1 activates AMPK by stimulating LKB1 via deacetylation, while AMPK activates SIRT1 by enhancing the NAD+ level [26]. Kim et al. found that resveratrol ameliorated oxidative stress and mitochondrial dysfunction by activating the SIRT1/AMPK/PGC-1α axis in an age-related renal injury [27]. Six weeks of exercise, resveratrol and the combination of both significantly improved the expression of p-AMPK and SIRT1 in the brains of aged rats to exert protective effects [28]. Swimming modulated the expression levels of SIRT1/PGC1α, AMPK and FOXO3a in the gastrocnemius muscles of 3-, 12- and 18-month-old rats and inhibited aged hippocampus cell apoptosis and inflammation through IGF1/PI3K/Akt signaling and AMPK/SIRT1/PGC1α signaling [29][30]. Regular aerobic exercise can balance apoptosis and autophagy within the corpus striatum in aged rats through the AMPK/SIRT1 pathway [31]. Wheel running can also activate lysosomal and autophagic functions in the mouse brain via AMPK/SIRT1/TFEB [32]. In SAMP8 mice, a model for aging, wheel running influenced the mitochondrial function via modulating the SIRT1/AMPK pathways [33]. E6155 reduced the fasting glucose and improved the tolerance to oral glucose and insulin through the SIRT1/LKB1/AMPK axis [34]. A moderate dose of resveratrol improved the mitochondrial biogenesis and function via AMPK stimulation induced by SIRT1 [26]. The AMPK/SIRT1/FOXO1 axis also participated in modulating apoptosis in bovine intracellular adipocytes [35]. Glucose restriction regulated nicotinamide phosphoribosyltransferase (NAMPT), an important rate-limiting enzyme in the synthesis of NMN, to stimulate SIRT1 with the help of AMPK to have a negative effect on skeletal myoblast differentiation [36].

5.2. Interaction between AMPK and mTOR Signaling

5.3. Interplay between SIRT1 and mTOR Signaling

The relationship between SIRT1 and mTOR remains largely unexplored. It was found that SIRT1 inhibits mTOR signaling by interacting with TSC2 [49]. SIRT1 was needed for rapamycin to have an effect on high-glucose-induced mesangial cells senescence [50]. The mTORC1 inhibitor rapamycin could enhance the expression levels of SIRT1 and AMPK and improve the deacetylase ability of SIRT1 in AML12 hepatocytes [51]. mTOR and SIRT1 cooperated to promote the proliferation of intestinal stem cells in CR [52]. SIRT1 decreased the autophagy and mitochondrial function in embryonic stem cells by downregulating the mTOR pathways in response to oxidative stress [53]. Similarly, in alcoholic liver disease mice and patients, the lack of DEPTOR and SIRT1 induced the abnormal activation of mTORC1, resulting in an increased phosphorylation level of mTOR and S6K1 to aggravate inflammation and acute-on-chronic liver injuries [54].