Smart and precise agriculture has increasingly been developed in the last decade, and with that, the idea of optimizing the tools commonly used in this field for harvesting tasks. One way to improve these devices, particularly cutting tools conceived for harvesting purposes, is to measure the shear energy consumption required for a particular plant. The proposed methodology aims to establish both a design criterion for cutting grippers and a quantifiable way to evaluate and classify a harvesting tool for a specific crop.

In the last 30 years, a large amount of research effort has focused on developing robots for automating harvesting processes. To achieve this goal, special emphasis has been placed on advancing general topics such as machine vision and detection systems [1][2][3][4][5][6][7][8], decision-making architectures [9][10][11], autonomous navigation [12][13][14] and dexterous manipulation [15][16][17][18]. In addition, some authors have focused on automating the harvesting of specific crops, which can be divided into three main groups according to the characteristics of the crop stalk. The first group are those that can be harvested by an indirect mechanical movement towards the fruit through a force applied to the plant itself, such as the harvesting of olives [19], almonds [20] and pistachio nuts [21], and this process does not include direct contact with the stalk of the same. The second group are those that, due to the fragile structure of the plant, cannot be shaken but need a mechanical force to be applied to the fruit itself; these actions are also known as plucking patterns (e.g., twisting, pulling and bending) actions and cause the fruits to be loosened from their peduncles [22]. Examples from this group are the harvesting of strawberries [22][23], apples [24][25][26][27] and tomatoes [28][29][30][31]. The final group are those that need a direct mechanical movement, or other type of cutting method, applied directly to the stalk, because due to their morphology, they are connected to the plant by a hard peduncle that must be cut, such as in the harvesting of aubergines [32][18], melons [33], oranges [34], cucumbers [35][36] and peppers [37][38]. The proposed design criterion is devoted for tools used to harvest this last group of fruits and vegetables that require a cutting process.

Although different types of harvesting tools and cutting devices have been developed to collect fruit [31][34][37][38][39][40][41][42][43], their designs have been accomplished empirically in many cases without considering the optimal design as an objective in itself. On the other hand, there are a multitude of patented tools in the market aimed at cutting the stalks of a wide range of plants [44][45]. Nevertheless, due to the private development of these tools, it is not possible to find in the literature any type of study or test carried out for their designs that details the performance or optimization of the required cutting energy. To increase the efficiency of these tools, implement new technologies, and provide a significant improvement in the agricultural sector, several researchers [46] have advocated for conducting experiments related to measuring the energy required to cut plant stalks. In this way, with quantifiable data and reliable conclusions, it will be feasible to redesign cutting machines to reduce their energy costs and increase their potential applicability in autonomous tasks [47][48].

With all these facts in mind, a novel design criterion for robotic harvesting grippers based on an analysis of shear energy measurements and other mechanical properties of crop stalks, such as shear force and ultimate shear stress, is presented. The proposed criterion will enable not only the design of tools that will reduce the energy consumed in pursuit of increasing the autonomy of agricultural harvesting robots but also the testing and benchmarking of different harvesting tool designs.

The proposed protocol brings together the knowledge and methods used by other authors for the study of the shear characteristics in agricultural applications. Furthermore, this protocol provides a design guide for cutting tools based on energy consumption minimization. Additionally, the protocol can be used as a classification framework based on its suitability for the crop to be harvested and can contribute to the advancement of the state of art in achieving more energy-efficient devices and classification methods. To summarize, this methodology is shown in Figure 1 and listed as follows: 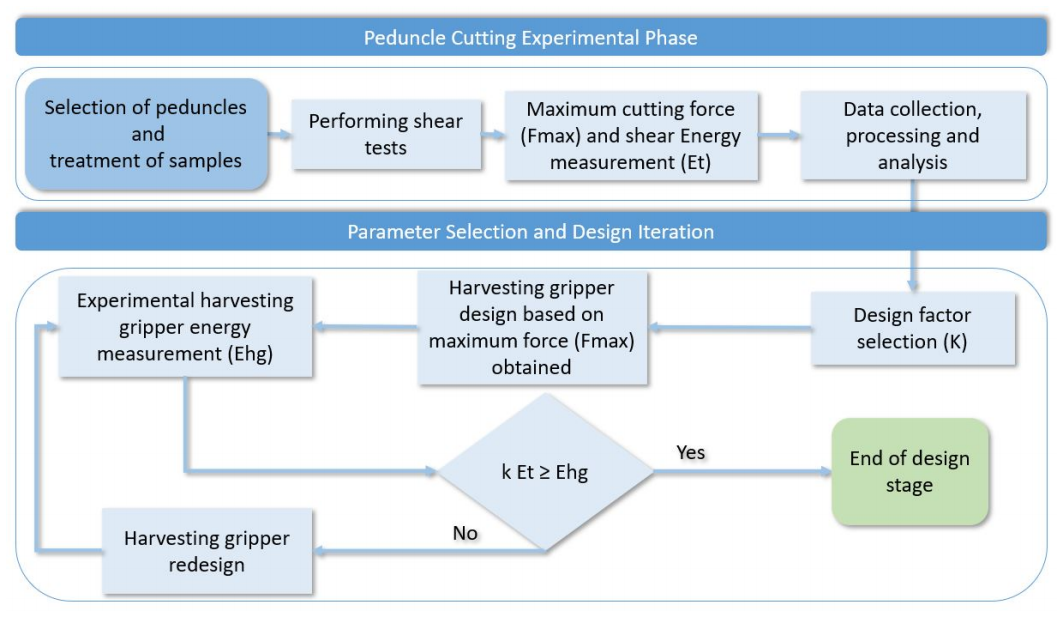 Therefore, this study has focused on the cutting tools that are implemented in harvesting robots since until now, there has been no design methodology for these types of tools. The proposed design criterion can be crucial for reducing the energy consumption of these tools and for increasing the efficiency of harvesting robots.

Finally, the proposed protocol is intended to be a guide for the designers of robotic cutting end-effectors and cutting tools for harvesting, as well as a way to determine the suitability of the cutting tools for the plants to be harvested.