Switchgear are a key component of the electrical grid. They serve both protective and control roles in distribution electric power with in the grid. It is therefore important to monitor and predict the condition of these assets. Thereby, condition monitoring is divided into three main tasks: breaker drive monitoring, thermal monitoring and partial discharge monitoring. This encyclopedia article provides an overview of the potential failure modes and monitoring techniques. More details can be found in an exhaustive review article, cited below.

Disclaimer: This text is an excerpt from [1], adjusted to the encyclopedia format.

The electrical distribution grid consists of many different components of varying importance. Among these, switchgear is an essential element that has both protective and control roles. With switchgear, it is possible to interrupt an electrical circuit, e.g., to prevent further damage after a fault or to modify parts of the circuit. There are many different types of switchgear. In this discussion of the usefulness of monitoring for components in the electrical grid, we focus on medium voltage switchgear and its key component, the circuit breaker.

Medium voltage switchgear deployed inside closed buildings is a so-called line-up consisting of typically tens of switchgear panels (Figure 1). Often, air is used as an insulation medium, allowing for greater flexibility in designing and extending the line-up. The main functionality and requirements of a medium voltage switchgear panel are the following: Segregation of electrical failures, e.g., arc flash, inside of one switchgear, guaranteeing safe operation by persons, serviceability & compactness, ability to disconnect and ground parts of the switchgear, long-time operation for several decades and limitation of heat-up of current-carrying parts. These aspects mainly dictate the fundamental design of a modern medium voltage switchgear. The entire electrical system is metal-enclosed, with doors often supervised by interlock systems. The switchgear is protected towards its neighboring switchgear by segregation walls and may be equipped with an air blast duct to guide away hot gas from an arc flash via a chimney integrated into the switchgear. Typically, switchgear is furthermore divided into several compartments: cable, breaker, and bus bar compartment for the high voltage carrying components (e.g., current-carrying, opening, and closing, insulation) as well as a compartment for the low-voltage control equipment (Figure 2). The leading protection equipment, e.g., circuit breakers, can be removed from the switchgear by a sliding mechanism allowing to take out the breakers for service or replacement. Additional functionality, e.g., current and voltage transformers and sensors, are integrated into the switchgear. For safe service operation and reconfiguration, the switchgear is typically equipped with an earthing switch. 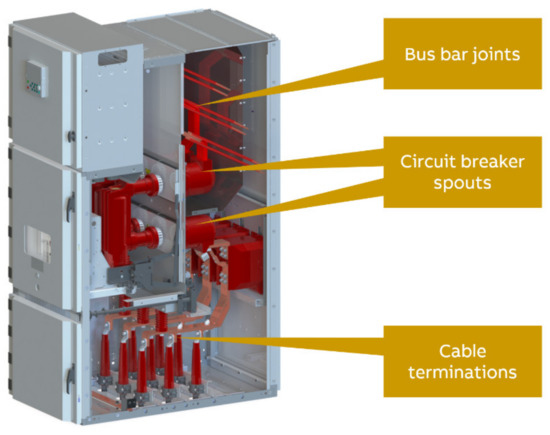 Generally, the medium voltage line-up consists of a central bus bar system running through all panels of the line-up. The central system consists of three horizontal individual bus bars, one for each phase. Inside each panel, vertical feeder bus bars are connected to the central system to connect to the components in the individual panel electrically. The individual panels can be configured as an incomer, feeder, bus-coupler, etc. A large variety of panel topologies can be found in the field as its detailed geometry highly depends on rated voltage (7.2 kV–36 kV) and current ratings (630–3150 A).

In switchgear, the critical task of a circuit breaker is to protect the electrical current from damage by interrupting fault currents and isolating faulty parts from the power grid. From a mechanical point of view, the circuit breaker is often grouped into four subsystems: drive, linkage, pole, and housing (Figure 3a). Spring-driven mechanisms are widely used in most of the applications where the drive subsystem provides the energy for closing and opening operations. The linkage represents the transmission mechanism between the drive and the pole that contains the electrical contacts interrupting the fault currents. The metal housing surrounds the drive and the linkage where the pole is enclosed with unique insulating material.

A German study of failure data of electrical components in the medium voltage distribution grid revealed that the circuit breaker is the main component prone to failure in medium voltage switchgear. About 90% of all circuit breaker failures are mechanical and therefore occur in the operating mechanism and the breaker drive, respectively (Figure 3b).

IEEE is providing guideline C37.10.1-2000, which gives a generic overview of several failure modes that may occur for circuit breakers in general. Each failure mode is described in detail with possible causes, effects, and characteristics, as well as offering monitoring options.

Several methods can be concluded from the state-of-the-art for monitoring the breaker drive. One method is to evaluate the contact travel time of closing and opening operation, which indicates the need for maintenance of the breaker drive . The detailed measurement of the contact travel gives further insight into the breaker health status. A further common method is to analyze the vibration signals at one location of the circuit breaker during closing and opening operations. Mechanical anomalies can be detected by comparing it with a healthy state. Signal processing methods like short-time FFTs and Wavelet analyses can support failure detection.

However, a review of the technical maturity of monitoring options concludes that the condition monitoring and diagnostics of the breaker drive still represents an open research topic. This is because the kinematic chain to the poles, representing the breaker drive, is very complex and consists of many mechanical parts (joints/bearings, springs, dampers, lever arms, sheet metal, rubber stops, electrical contacts, etc.) which may potentially fail.

The passage of electric current through a conductor generates heat in a process called Joule heating (Figure 4). According to Joule’s first law, both the current as well as the resistance influence the amount of heat generated: P∝I2R
Since many faults (e.g., deterioration, lose connections, or corrosion) increase the resistance of electrical contacts, their presence can be detected via temperature monitoring. Moreover, an increased current will also produce more heat, which can speed up deterioration and reduce the life expectancy of electrical equipment.

In switchgear, several electrical connections are established by screwing together metal conductors such as the busbars. These connections can become loose due to ambient vibration, e.g., if mounted on nautical vessels or next to heavy-duty production facilities. Another common cause of looseness is the attachment of the screws at the wrong torque, e.g., after a maintenance operation.

According to IEC standard 60270, partial discharge (PD) is a localized dielectric breakdown of a small portion of an electrical insulation system under high voltage stress, which partially bridges the gap between two conductors which are put on different electrical potential. PD is generally divided into two major sub-groups, internal and external PD, depending on their occurrence.
These discharges indicate that locally the electric insulation cannot withstand the electric field stress applied to them. While the correlation of PD occurrence with a subsequent imminent breakdown of an electric system is often not clear, PDs are known to be visible in a large number of cases, where a breakdown occurred later. PDs usually have small magnitude, but over time they can cause progressive deterioration of insulation. The electrical insulation subjected to high electrical fields starts to degrade due to mechanical, thermal, and electrical stress. PD is both symptomatic of insulation breakdown and a mechanism for further insulation damage. Therefore, the detection of PD strength and type can be used to evaluate the instantaneous condition of the insulation. Furthermore, its degradation over time may be predicted based on sensing a gradual increase in PD activity. There are different sensing concepts for PD detection, i.e. capacitive, inductive, UHF/VHF, acoustic, and optical approaches, often with the additional aim of identifying the short pulses corresponding to the discharges occurring at critical voltages or times.

A specific field of recent interest is to gather data to be able to derive correlations between PD activity and power quality. The ongoing trend towards renewables and electrical mobility, both of which are inherently coupled with an increase in the use of semiconductor-based switching power converters, changes the electrical stress that the insulation system must undergo. While previously, the voltage on an AC network contained the rated frequency predominantly with low harmonic content and flicker, the situation has changed with the increase in power electronic-based converters. Not only has this caused an increase in the harmonic content (in the total harmonic distortion, or THD), switching transients have also increased. The critical case of switchgear, which is used as supplies for large electric vehicle charging stations, is an example where this phenomenon could become increasingly relevant.

For an example of a condition monitoring system for switchgear, see e.g. [2].

Further details and an exhaustive list of references can be found in a review article on using novels sensors and artificial intelligence to enable predictive maintenance for switchgear [1], from which this encyclopedia article was extracted from.