Manufacturing Innovation Index (GGMII) was developed by formulating an input-oriented data envelopment analysis model. Criteria such as the value added to the gross domestic product (GDP), corresponding CO2 emissions, and unemployment rates were examined in order to represent the economic, environmental, and social dimensions of SD, respectively. Other scientific and technological dimensions were also considered. The data corresponding to all ten of the criteria were collected from World Bank Open Data.

Innovation-based economic growth is considered a vital strategy for attaining economic success in employment and overall prosperity. The environmental degradation associated with such advancements has resulted in the appearance of several environmentally friendly concepts, such as green/sustainable development (SD) [1]. The rapid development of green innovation worldwide is contributing significantly to almost all kinds of industries [2]. However, attempts to research such promising concepts are still in need of unbounded and continued support [3]. Even though the recent literature on the Green Innovation Index (GII) has provided various investigations relevant to different aspects of innovation, some key technological and/or practical issues have not yet been handled appropriately.
The dilemma of creating a comprehensive GII that considers environmental concerns represents one such critical issue. Even when the latest version of the GII (Figure 1), published in 2020, employed data envelopment analysis (DEA) as a benchmarking tool to measure economies’ multi-dimensional performances with respect to innovation [4], the sustainability dimensions (in particular, the environmental measures) were not explicitly included either as inputs or as outputs. Moreover, the structural relationships among the GII inputs and outputs have been ignored in the recent utilization of DEA in the GII [5]. The potential capability to measure a degree of innovation is more complex than what is being considered and practiced in the current GII [6][7]. 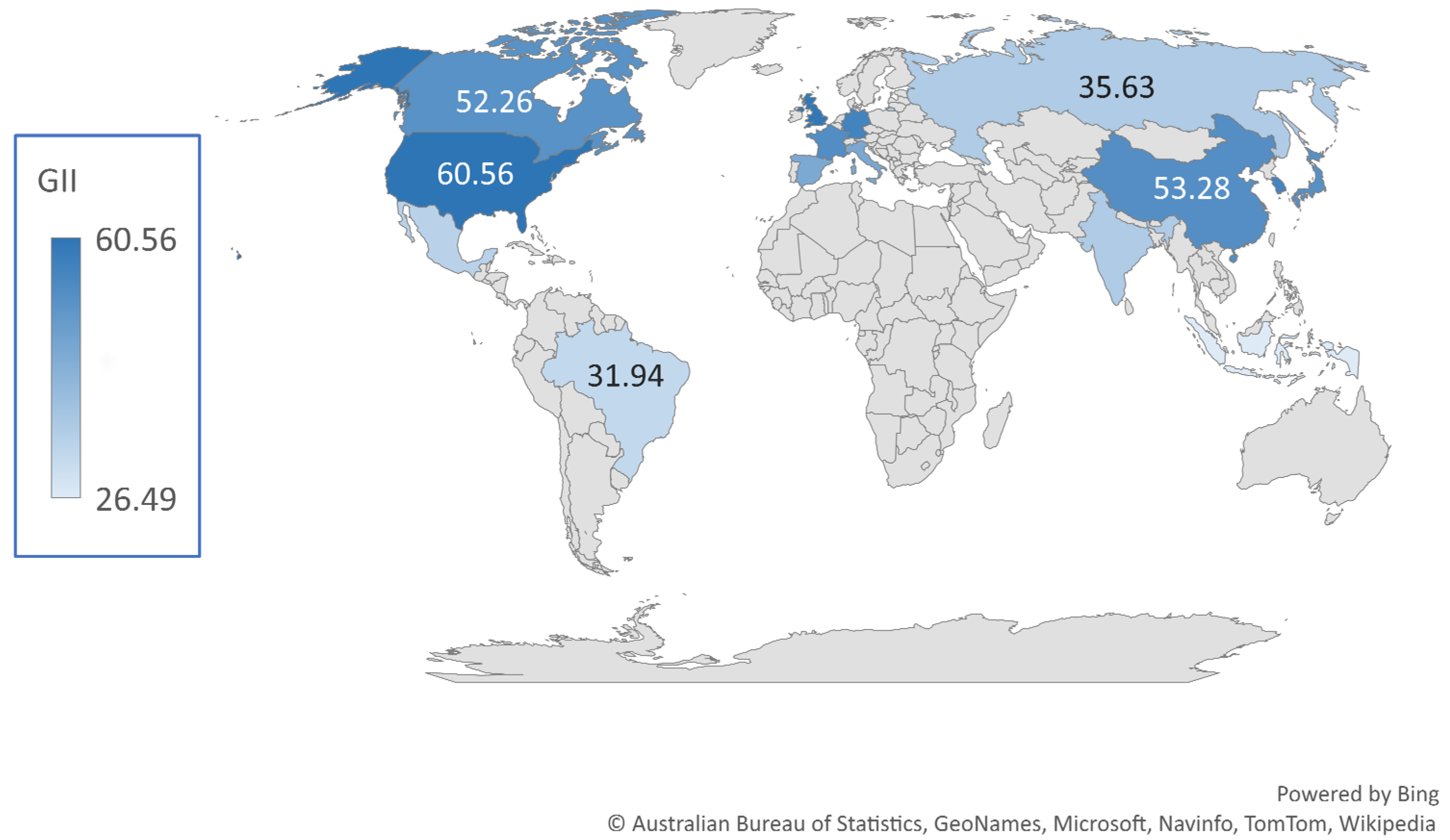 Figure 1. Global Innovation Index (GII) for the top 15 manufacturing countries worldwide, based on the manufacturing net value added to the GDP. (Source: data corresponding to each country were collected by the author from the Global Innovation Index report [4]; a licensed Microsoft Excel copy from King Abdulaziz University was then utilized to develop the figure; which is automatically labeled by the following statement: “Powered by Bing © Australian Bureau of Statistics, GeoNames, Microsoft, Navinfo, TomTom, Wikipedia”).
An input-oriented DEA approach was formulated using ten criteria, three of which represented SD in its three generic dimensions, which consider aspects of manufacturing. These three criteria were selected to represent economic, environmental, and social factors: (1) manufacturing in terms of the net value added to the country’s gross domestic product (GDP) measured in US dollars, (2) the CO2 emissions from all manufacturing industries, including construction, as a percentage of the total fuel combustion, and (3) the level of unemployment measured as a percentage of the total labor force. The remaining seven criteria represent the maturity of the manufacturing practices, as all relevant/appropriate scientific and technological World Bank indicators were considered. The extent to which the GII scores had been influenced by the final efficiency scores of these 15 countries was then identified in order to obtain the final GGMII scores for each country.

2. The Different Aspects of Innovation

The different aspects of innovation are presented briefly in this section, in order to highlight the nature of the innovative practices being utilized in the top manufacturing countries. In the United States, innovation in Massachusetts has been investigated for “ecosystems dynamics,” and it has been concluded that the state has great manufacturing capabilities that are providing effective contributions to its leading industries [8], including complex industries such as the automotive industry [9]. The UK Innovation Index has shown that the UK’s intangible investments such as investment in R&D, software, design, training, and organizational capital were key contributors to economic growth. Furthermore, it was concluded that the UK information/communications industry represented the most intangible industry in terms of the value it added to the UK’s economy [10]. In Germany, it has been stressed that organizational characteristics play a significant role in determining the extent to which firms attain innovation [11]. Similarly, in France, numerous innovation-focused studies have been conducted. For instance, innovation has been studied in relation to the influence of the company directors’ characteristics, and it was found that highly educated and independent executives contribute positively to complex decision making, in turn fostering the innovation process and increasing the number of patents that are registered [12].
According to several studies, China also needs to work on creating a kind of growth that collectively and implicitly considers all of the aspects of green economic growth (i.e., the economic and the environmental dimensions) in order to attain better utilization of its resources [13]. In Spain, knowledge-intensive business services (KIBS) have been investigated in order to study the relationships between various sources of knowledge and innovation authenticity, and it was concluded that R&D was negatively linked with innovation, indicating that the definition of R&D should be clarified in order to ensure better linkages with innovation [14]. In the Korean manufacturing sector, the innovation capabilities of small and medium-sized enterprises (SMEs) have been empirically investigated in order to identify the strategic directions necessary for policymakers to be able to enhance sustainable innovation practices, considering the positive linkage between technological innovation performance and firms’ innovation capabilities [15].
Several aspects of green innovation have been studied in Japan, the United States, and a set of European firms, and one of the conclusions was that R&D efforts focusing on clean production processes strongly affect firms’ maturity levels in terms of their strategic decisions on green investments [16]. Indeed, the positive effect of digitalization on Japanese manufacturing SMEs resulted in better levels of attainment in satisfying customer needs, sales, and profits [17]. In the Italian manufacturing sector, several innovation issues have been discussed in the recent literature, such as the significance of R&D in product innovation within SMEs [18], the relationship between open innovation and human resources [19], the challenges for craft companies relating to digital manufacturing and open innovation [20], the funding of SMEs and their associated innovation strategies [21], and the learning processes that are taking place during the implementation of innovation practices [22].
With the aid of a robust data set, innovation was recently analyzed using two direct measures, R&D spending and the total number of innovations, in order to investigate the case of a Canadian manufacturing company [23]. In Mexico, large amounts of data were collected from 6378 companies in order to understand and interpret the nature of Mexico’s competition with China to penetrate US markets, in particular, the analysis explored the extent to which such competition has enhanced innovation in the Mexican manufacturing sector [24]. The market competition among Mexican companies showed a negative linear relationship with the firms’ innovation capabilities, due to the gaps between leader and follower companies [25]. In Indonesia, innovation was found to represent a critical dilemma, and it needed to be treated promptly in order to resolve issues such as substandard innovation performance indicators, the absence of creativity culture, limited R&D spending, and the absence of a comprehensive national innovation plan [26]. Hence, recent barriers to innovation for Indonesian manufacturing companies have been classified into four categories: markets and institutional situations; human resources and organizational relationships; risks associated with financial issues; and knowledge sharing and collaboration [27]. In order to enhance Russian manufacturing companies’ performance in innovation, science-based collaboration strategies have been discussed in an effort to link academia with industries [28]. Local Indian companies have attained better green innovation practices compared to foreign direct investment (FDI) companies due to a lack of enforcement of regulations on foreign companies in India [29].