Due to the growing prevalence of diabetes worldwide, an increased incidence of premature deaths attributable to both diabetes as well as its complications is consequently to be expected [1]. In 2017, approximately five million deaths in both developed and developing countries were reported which can directly be related to diabetes [1]. The most common cardiovascular (CV) manifestations in individuals with type 2 diabetes mellitus (T2DM) included heart failure (HF), peripheral arterial disease, and coronary heart disease [2]. Prevalence of HF in the patient population with established T2DM is twofold higher than in those without the disease [3][4][3,4]. The Reykjavík Study has shown an overall prevalence of T2DM and HF of 0.5% in men and 0.4% in women [5]. Therefore, the odds ratio (OR) for the association between T2DM and HF is 2.8 (95% CI = 2.2–3.6) and between abnormal glucose regulation and HF it is 1.7 (95% CI = 1.4–2.1) [5].
Fatal and non-fatal CV outcomes, a risk of urgent hospitalization, and both short-term and long-term prognoses are sufficiently worse for T2DM patients when compared with those without T2DM [6]. T2DM development coincides with numerous structural and functional changes in the heart, vessels, skeletal muscles, adipose tissue, kidney, and other target organs, which in the presence of traditional CV risk factors contribute to increased HF risk [7][8][7,8]. Numerous clinical trials have revealed the synergistic effect of managing both HF and T2DM on their prognosis and clinical course [9][10][11][9,10,11]. In this context, biomarkers that reflect various pathophysiological stages of T2DM progression might have promising potential in guiding therapies. In addition, biomarkers offer important diagnostic and predictive information, which cannot be derived from clinical observation or objective data evaluation [12][13][12,13]. 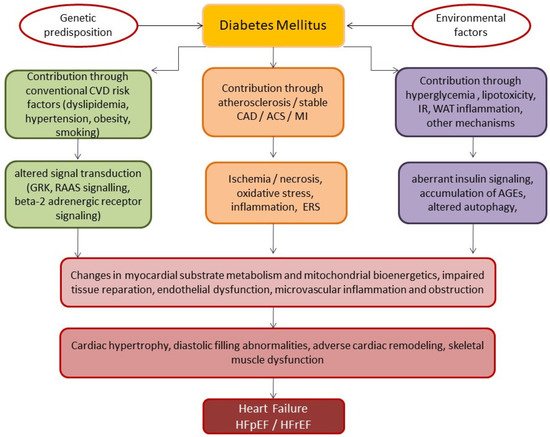 3. Biomarkers in Diabetics with Known HF

Biomarkers have been posed as promising surrogate indictors of pathologic changes in target organs (myocardium, kidney, vessels, and skeletal muscles) and metabolic homeostasis, particularly having diagnostic and predictive capabilities for patients with T2DM and HF [47]. Current clinical guidelines of the American College of Cardiology (ACC)/American Heart Association (AHA)/Heart Failure Society of America (HFSA) and European Cardiology Society (ESC) have proposed the use of biomarkers in personalized medical care of HF patients, regardless of T2DM, to diagnose HF and stratify patients at higher risk of poor prognosis, despite some differences in recommendations for practical use [6][48][49][6,48,49]. Table 1 reports the use of biomarkers in the management of HF according to 2016 ESC and 2017 ACC/AHA clinical guidelines [6][48][6,48].
Table 1. 2016 ESC and 2017 ACC/AHA/HFSA recommendations for the use of biomarkers in the management of HF.
Abbreviations: ACC, American College of Cardiology; AHA, American Heart Association; BNP, B-type natriuretic peptide; HF, heart failure; HFSA, Heart Failure Society of America; NT-proBNP, N-terminal pro-B-type natriuretic peptide; sST2, soluble ST2; COR, class of recommendation; LOE, level of evidence; MR-proANP, mid-regional pro A-type natriuretic peptide; hs-cTn, high-sensitivity cardiac troponins; HFrEF, heart failure reduced ejection fraction; HFpEF, heart failure preserved ejection fraction; HFmrEF, heart failure mid-range ejection fraction; *, provided for 2016 ESC recommendation only.
Although biomarkers of biomechanical stress (natriuretic peptides) and myocardial injury (high-sensitivity cardiac troponins (hs-cTn)), which are commonly used in HFrEF and to help to diagnose HFpEF, have high predictive utility in T2DM, they are markers of general pathological processes and consequently are not specific for T2DM-induced HF [50]. Conventional and alternative biomarkers of HF in T2DM patients are reported in Figure 2. 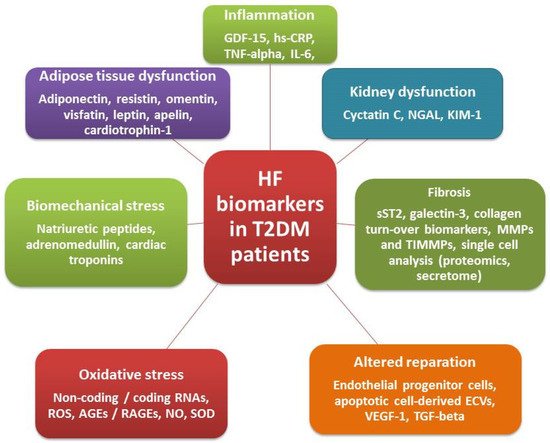 Multiple biomarker predictive models are considered as an effective method to increase the specificity and sensitivity of a single biomarker tool [56][155]. Data confirm the superiority of multiple models compared with conventional models in risk stratification in HFpEF, whereas the adoption of serial biomarker measurements for risk stratification in HFpEF remains uncertain. However, different combinations of circulating cardiac biomarkers are likely a promising tool to improve prediction, risk stratification, and therapy in T2DM with HF, although there are limited data on the optimal number of biomarkers that can be allocated to improve point-of-care therapy among both HFrEF and HFpEF patients [57][156]. There is no strong evidence that single biomarker use is superior to a multiple biomarker strategy for every clinical condition in HF patients. For instance, the MOLITOR (Impact of Therapy Optimisation on the Level of Biomarkers in Patients with Acute and Decompensated Chronic Heart Failure) study has shown that serial measurements of multiple biomarkers (C-terminal fragment of pre-pro-vasopressin, NT-proBNP, mid-regional pro-atrial natriuretic peptide, mid-regional pro-adrenomedullin, and C-terminal pro-endothelin-1) in advanced HF were no better than measurements of the C-terminal fragment of pre-pro-vasopressin [58][157]. Pandey A. et al. (2021) [59][158] evaluated the application of a biomarker-based risk score to identify patients with dysglycemia that were at high risk of incident HF. They enrolled individuals from three cohort studies (ARIC (Atherosclerosis Risk In Communities), DHS (Dallas Heart Study), and MESA (Multi-Ethnic Study of Atherosclerosis)). The original biomarker score included hs-cTnT ≥ 6 ng/L, NT-proBNP ≥ 125 pg/mL, hs-CRP ≥ 3 mg/L, and left ventricular hypertrophy identified by electrocardiography with one point for each abnormal parameter. The authors found that the 5-year risk for HF was associated with an increase in biomarker score; moreover, the highest risk was noted in patients with total scores of ≥3 (diabetes: 12.0%; pre-diabetes: 7.8%). Thus, it has been established that the biomarker score can stratify the HF risk among patients with T2DM and pre-diabetes. Berezin AE et al. (2019) [60][159] reported that the combination of NT-proBNP and ST2 had higher prognostic ability when compared with each biomarker alone in patients with acute HF, except for galectin-3 and hs-CRP, which did not increase in discriminative potency when compared to a multiple biomarker model in ischemia-induced HF. Consequently, these conflicting results deserve closer investigation in large clinical trials in the future.

In the clinical setting, the detection of individual biomarkers or a combined analysis thereof are promising tools to support the manifestation and diagnosis of cardiac diseases, such as HF. The ACC/Aha/HFSA guidelines (2017) [6] have also recommended the measurement of additional biomarkers, such as sST-2 and galectin-3, for the risk assessment in HF. Although multiple assays are available to detect a vast number of biomarkers, they are most often rather expensive and time-consuming. For instance, as far as most enzyme-linked immunosorbent assays (ELISA) are concerned, several hours or one entire day are necessary to obtain the assay results, depending on the kit used. However, in point-of-care clinical diagnostics, it is crucial to obtain reliable results within a short time range. Multiple companies have addressed this challenge and have already successfully rolled out some rapid tests for biomarker analysis.