The Precambrian (or Pre-Cambrian, sometimes abbreviated pЄ, or Cryptozoic) is the earliest part of Earth's history, set before the current Phanerozoic Eon. The Precambrian is so named because it preceded the Cambrian, the first period of the Phanerozoic eon, which is named after Cambria, the Latinised name for Wales, where rocks from this age were first studied. The Precambrian accounts for 88% of the Earth's geologic time. The Precambrian (colored green in the timeline figure) is an informal unit of geologic time, subdivided into three eons (Hadean, Archean, Proterozoic) of the geologic time scale. It spans from the formation of Earth about 4.6 billion years ago (Ga) to the beginning of the Cambrian Period, about 541 million years ago (Ma), when hard-shelled creatures first appeared in abundance.

Relatively little is known about the Precambrian, despite it making up roughly seven-eighths of the Earth's history, and what is known has largely been discovered from the 1960s onwards. The Precambrian fossil record is poorer than that of the succeeding Phanerozoic, and fossils from the Precambrian (e.g. stromatolites) are of limited biostratigraphic use.[1] This is because many Precambrian rocks have been heavily metamorphosed, obscuring their origins, while others have been destroyed by erosion, or remain deeply buried beneath Phanerozoic strata.[1][2][3]

It is thought that the Earth coalesced from material in orbit around the Sun at roughly 4,543 Ma, and may have been struck by a very large (Mars-sized) planetesimal shortly after it formed, splitting off material that formed the Moon (see Giant impact hypothesis). A stable crust was apparently in place by 4,433 Ma, since zircon crystals from Western Australia have been dated at 4,404 ± 8 Ma.[4]

The term "Precambrian" is recognized by the International Commission on Stratigraphy as the only "supereon" in geologic time; it is so-called because it includes the Hadean (~4.6–4 billion), Archean (4–2.5 billion), and Proterozoic (2.5 billion—541 million) eons. (There is only one other eon: the Phanerozoic, 541 million-present.)[5] "Precambrian" is still used by geologists and paleontologists for general discussions not requiring the more specific eon names. (As of 2010), the United States Geological Survey considers the term informal, lacking a stratigraphic rank.[6] 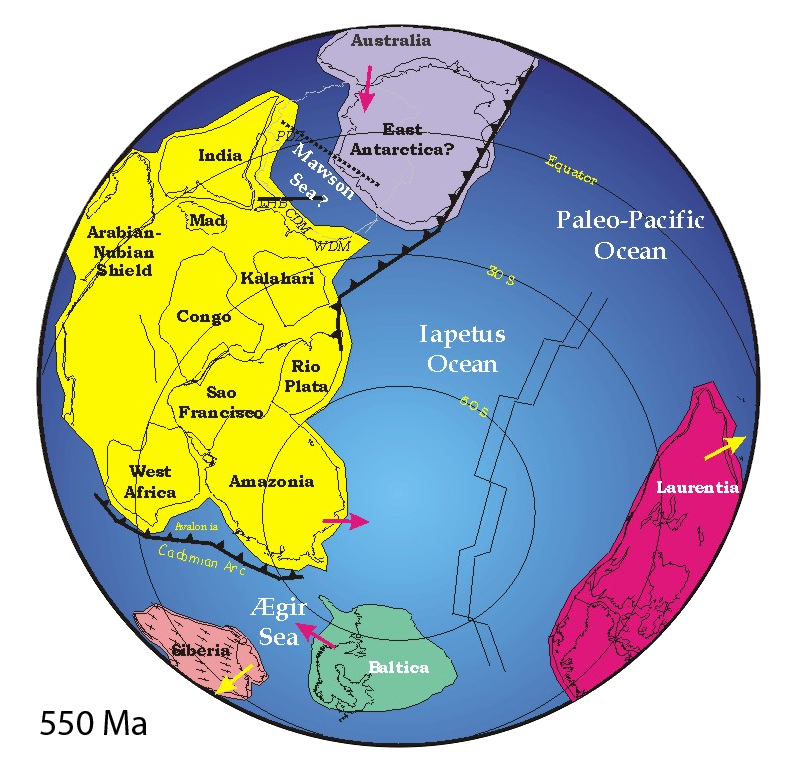 Landmass positions near the end of the Precambrian. https://handwiki.org/wiki/index.php?curid=1139374

A specific date for the origin of life has not been determined. Carbon found in 3.8 billion-year-old rocks (Archean eon) from islands off western Greenland may be of organic origin. Well-preserved microscopic fossils of bacteria older than 3.46 billion years have been found in Western Australia.[7] Probable fossils 100 million years older have been found in the same area. However, there is evidence that life could have evolved over 4.280 billion years ago.[8][9][10][11] There is a fairly solid record of bacterial life throughout the remainder (Proterozoic eon) of the Precambrian.

Excluding a few contested reports of much older forms from North America and India, the first complex multicellular life forms seem to have appeared at roughly 1500 Ma, in the Mesoproterozoic era of the Proterozoic eon. Fossil evidence from the later Ediacaran period of such complex life comes from the Lantian formation, at least 580 million years ago. A very diverse collection of soft-bodied forms is found in a variety of locations worldwide and date to between 635 and 542 Ma. These are referred to as Ediacaran or Vendian biota. Hard-shelled creatures appeared toward the end of that time span, marking the beginning of the Phanerozoic eon. By the middle of the following Cambrian period, a very diverse fauna is recorded in the Burgess Shale, including some which may represent stem groups of modern taxa. The increase in diversity of lifeforms during the early Cambrian is called the Cambrian explosion of life.[12][13]

While land seems to have been devoid of plants and animals, cyanobacteria and other microbes formed prokaryotic mats that covered terrestrial areas.[14]

Tracks from an animal with leg like appendages have been found in what was mud 551 million years ago.[15]

3. Planetary Environment and the Oxygen Catastrophe 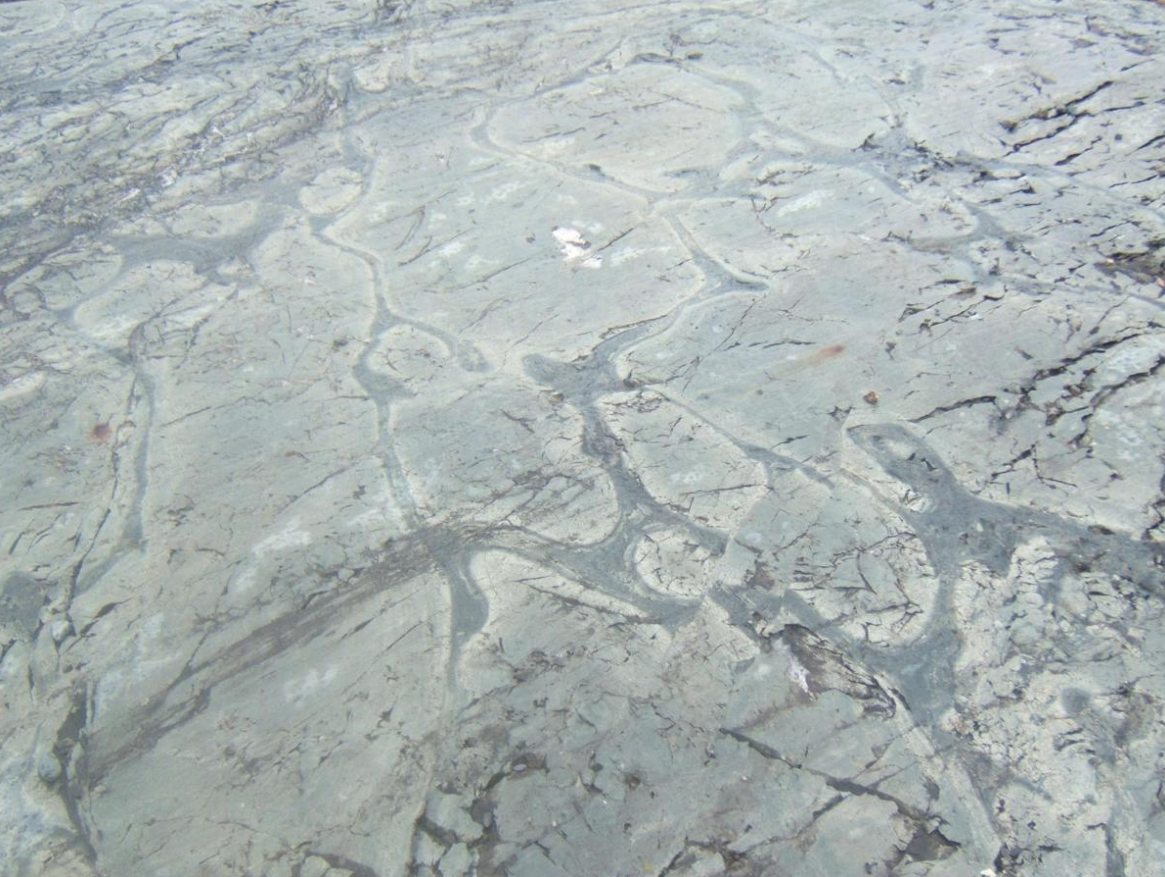 Evidence of the details of plate motions and other tectonic activity in the Precambrian has been poorly preserved. It is generally believed that small proto-continents existed prior to 4280 Ma, and that most of the Earth's landmasses collected into a single supercontinent around 1130 Ma. The supercontinent, known as Rodinia, broke up around 750 Ma. A number of glacial periods have been identified going as far back as the Huronian epoch, roughly 2400–2100 Ma. One of the best studied is the Sturtian-Varangian glaciation, around 850–635 Ma, which may have brought glacial conditions all the way to the equator, resulting in a "Snowball Earth".

The atmosphere of the early Earth is not well understood. Most geologists believe it was composed primarily of nitrogen, carbon dioxide, and other relatively inert gases, and was lacking in free oxygen. There is, however, evidence that an oxygen-rich atmosphere existed since the early Archean.[16]

At present, it is still believed that molecular oxygen was not a significant fraction of Earth's atmosphere until after photosynthetic life forms evolved and began to produce it in large quantities as a byproduct of their metabolism. This radical shift from a chemically inert to an oxidizing atmosphere caused an ecological crisis, sometimes called the oxygen catastrophe. At first, oxygen would have quickly combined with other elements in Earth's crust, primarily iron, removing it from the atmosphere. After the supply of oxidizable surfaces ran out, oxygen would have begun to accumulate in the atmosphere, and the modern high-oxygen atmosphere would have developed. Evidence for this lies in older rocks that contain massive banded iron formations that were laid down as iron oxides.

A terminology has evolved covering the early years of the Earth's existence, as radiometric dating has allowed real dates to be assigned to specific formations and features.[17] The Precambrian is divided into three eons: the Hadean (4600–4000 Ma), Archean (4000-2500 Ma) and Proterozoic (2500-541 Ma). See Timetable of the Precambrian.