Walnut (Juglans regia) is an economically important specialty crop, providing edible nuts, high-quality wood, and medicinal uses, with a distribution ranging from tropical to temperate zones in Asia, Europe, and the Americas. Walnut bacterial blight (WB) is a bacterial disease that reduces the productivity of walnut orchards in California and worldwide [17]. This disease decreases the quality, especially in wet years and in early-leafing varieties. Walnut blight is caused by Xanthomonas arboricola pv. juglandis (Xaj), a gamma-proteobacterium that attacks various tissues of English (Persian) walnuts, including catkins, female flowers, fruit, green shoots, buds, and leaves [18]. The primary cause of economic loss is disease development in the fruits after flowering. One of the challenges of controlling the bacterial spread is the extended period of host susceptibility. The pathogen can survive in infected trees in twig lesions, buds, and diseased fruits year after year [19].

Copper-based biocides are effective in many pathosystems involving Xanthomonas spp., although some Xaj isolates are especially resistant [23,24]. Some pathosystems such as the bacterial blight of rice, bacterial spot, and black rot diseases have been studied in molecular detail, revealing specific plant-microbe protein interactions [25–29]. These include, for example, production by the host of pathogenesis-related (PR) proteins triggered by detection of pathogen- or damage-associated molecular patterns (PAMPs and DAMPs, respectively) [30,31]. Another layer of responses involves effector-triggered immunity (ETI) upon the detection of type III effectors secreted into plant cells by the bacterium, capable of altering the host gene expression and disease progression [32]. Similar strategies are also employed by Xanthomonas pathogens in stone and fruit trees, exemplified by citrus bacterial canker disease caused by Xanthomonas citri [33]. Despite these similarities, there are also significant differences such as the adoption of transcription activator-like (TAL) effectors to alter host responses by some, but not all, Xanthomonas species [34]. Hence, the need to study each pathosystem in molecular detail, so common and disease-specific themes can be identified and characterized more precisely. In WB, a distinctive symptom on fruits is the intensely dark pigmentation of the hull tissues that progresses to the edible parts, until the kernel is damaged [17]. Polyphenol oxidases (PPOs), which are copper-containing enzymes, have been implicated in the synthesis of these pigments, which include tannins and melanins [35–37], and have attracted further interest in their role in plant health [38].

Defining the molecular markers that can assist molecular breeding or gene-editing approaches is a necessary step to accelerate breeding efforts for tree crops. WB is among the few pathosystems in which complete genome sequences of both the host and pathogen are available as a valuable reference [39,40], contributing to the molecular phenotyping of the disease process. To provide an in-depth assessment of the molecular responses and interactions between the host and pathogen leading to WB, researchers performed a comparative proteomic analysis of symptomatic vs. healthy fruit tissues. By combining state-of-the-art LC-MS/MS and data analysis methods for peptide identification, the major molecular functions and biological processes affected by WB were determined, as were the individual proteins and protein families with differential abundance. These molecular networks deepen our understanding of the role of specific proteins and protein classes in plant-pathogen interactions and reveal details of the disease mechanisms behind WB. This can potentially lead to more targeted and sustainable therapies to protect walnut production against diseases like WB. 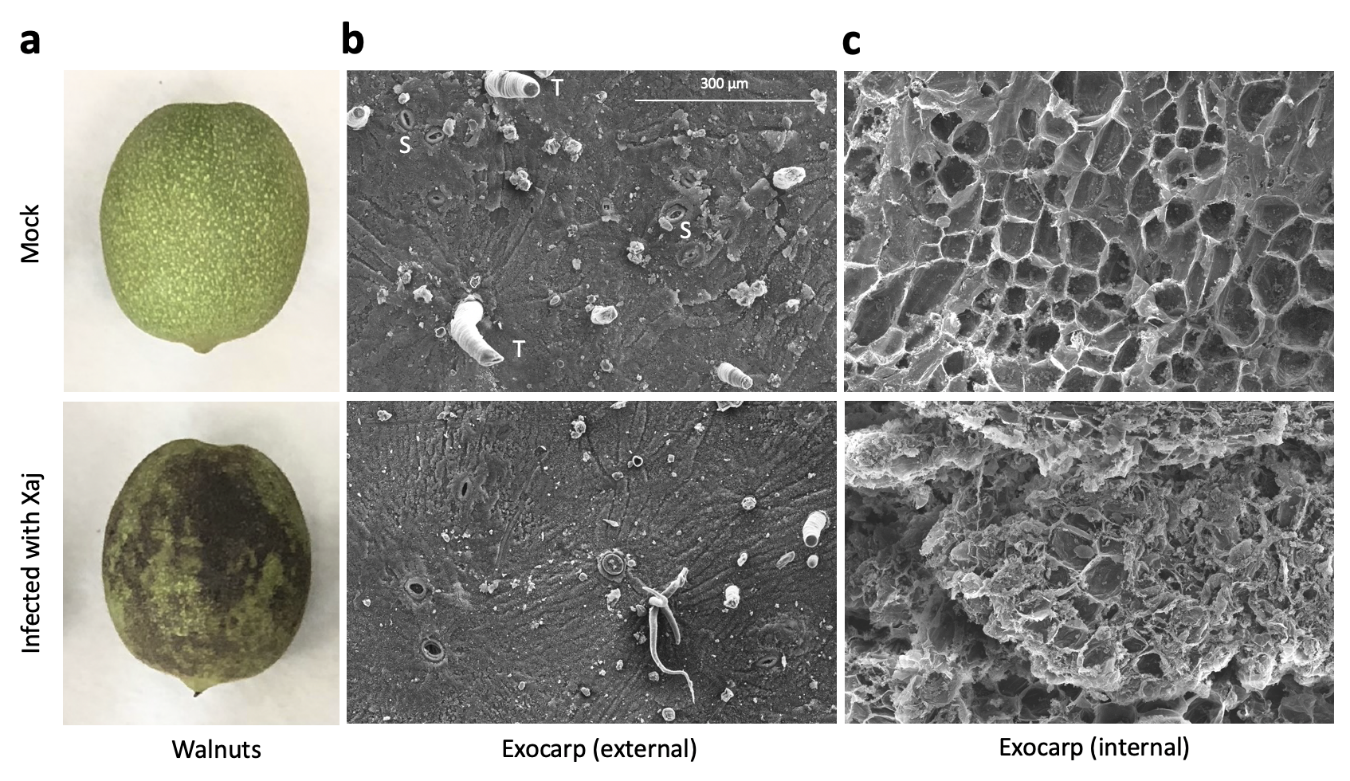 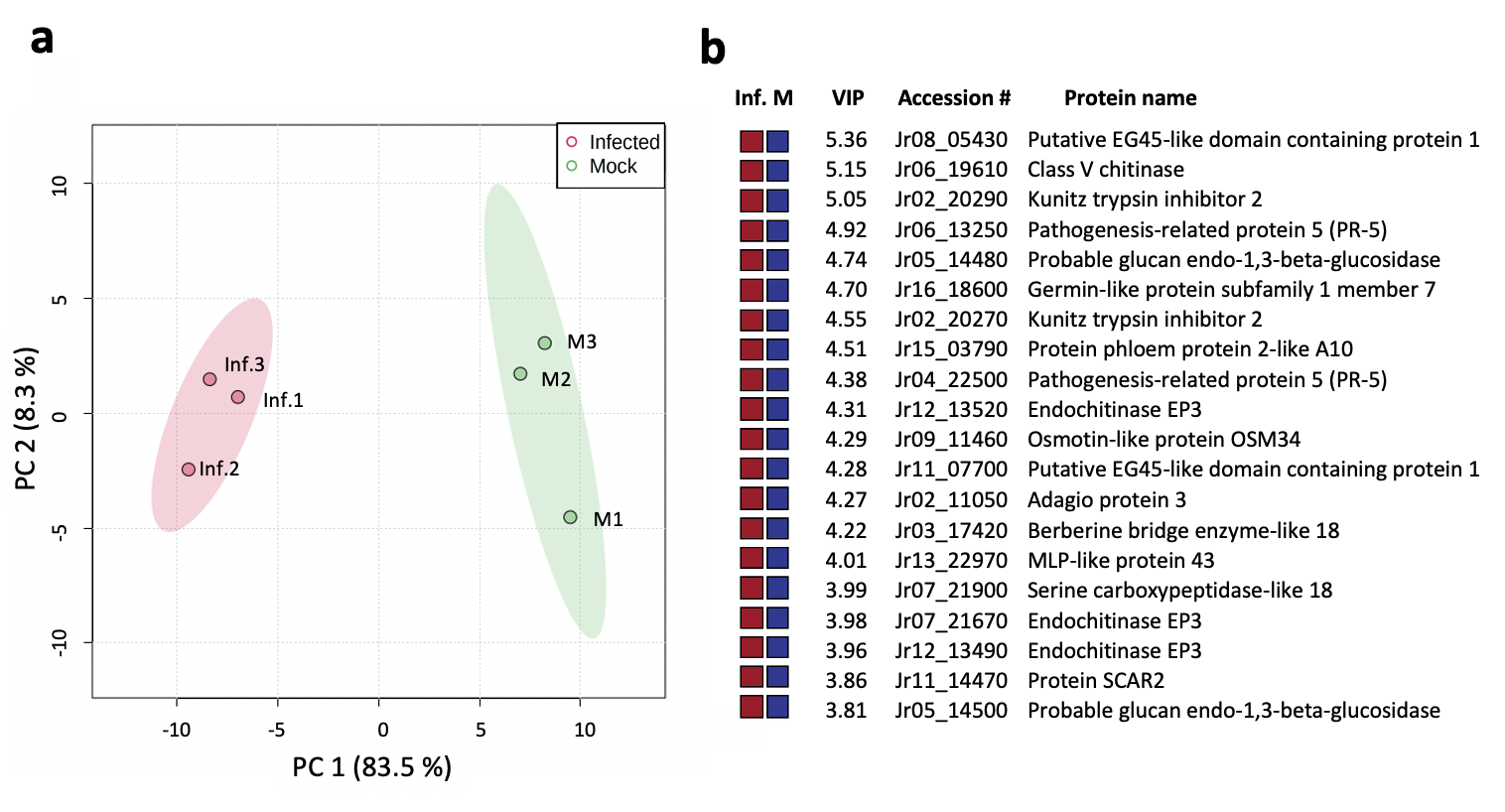 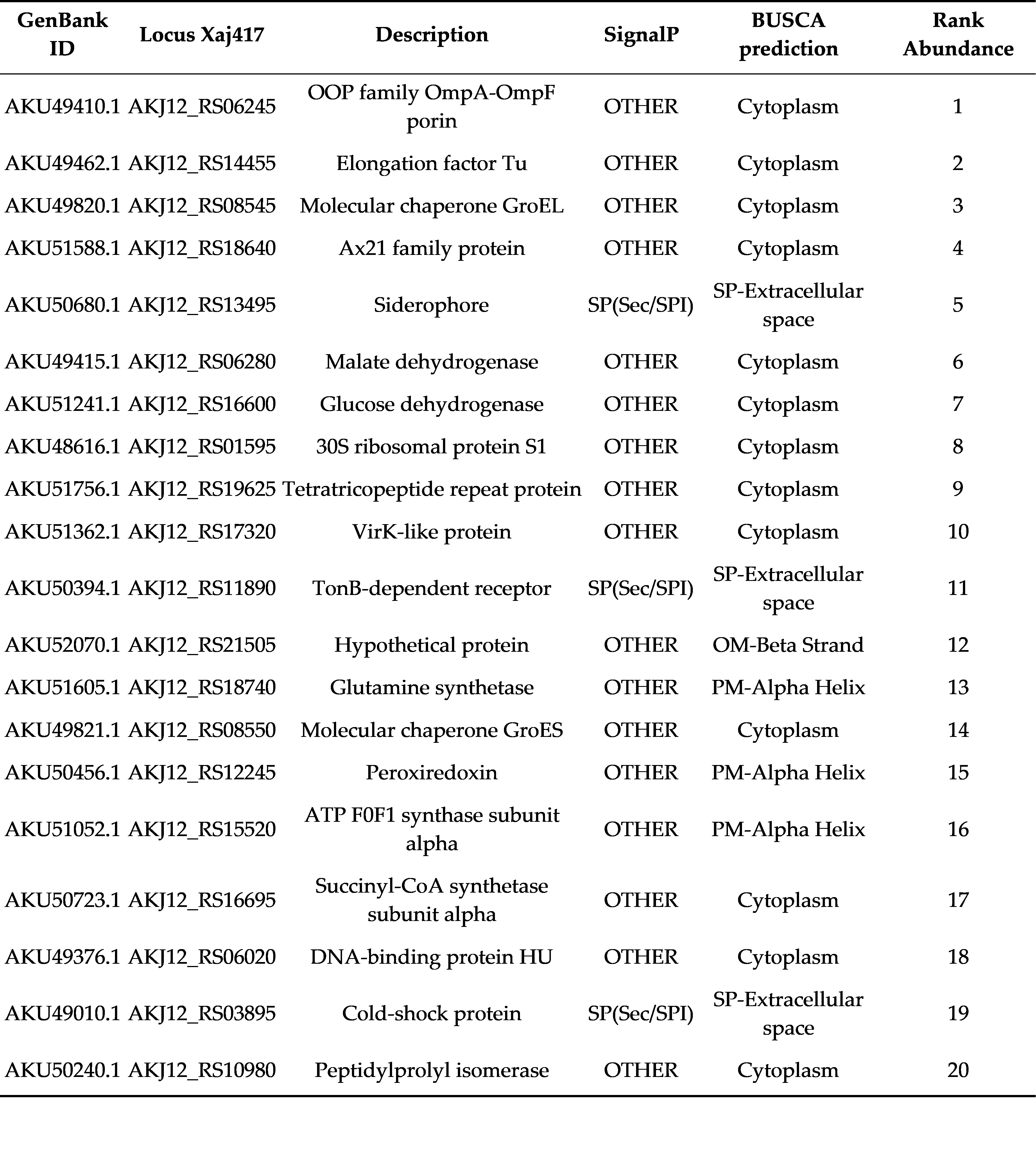 An analysis of the 272 Jr proteins with reduced abundance in the infected tissues (log2 FC < -1 and FDR ≤ 0.05) resulted in 237 mapped proteins (Table S6) overrepresented in biological processes such as chromatin silencing (GO:0006342), ribosomal large subunit biogenesis (GO:0042273), and the monosaccharide metabolic process (GO:0005996), among 61 other classified terms, suggesting an arrest in the biosynthesis and channeling of the carbon and energy sources toward the degradation pathways. Eight molecular functions decreased during infection, including the structural constituents of the ribosome (GO:0003735), RNA binding (GO:0003723), and oxidoreductase activity (GO:0016491). The cellular components most negatively affected among the 29 terms included the ribosomal subunit (GO:0044391), chloroplast (GO:0009507), and cytosol (GO:0005829). The eight PANTHER protein classes highlighted included histone (PC00118), the ribosomal protein (PC00202), and dehydrogenase (PC00092). No specific pathway was statistically overrepresented in the protein set with the reduced abundance in symptomatic tissues.

Walnut bacterial blight is the most serious above-ground bacterial disease of this tree crop, as the pathogen targets nut tissues, devastating the productivity and quality of walnut orchards. This is the first study that examines the molecular responses during disease development by comparing the proteomes of infected fruit hulls to healthy tissue. This study was leveraged by the complete genome sequences from the pathogen and the recently published chromosome-scale reference walnut genome [40] to more accurately predict the contribution of the specific plant or pathogen-derived proteins and determine their role in WB disease. The degradation of plant tissues in infected fruits, shown by the scanning electron microscopic analysis, can now be interpreted from a proteomic perspective, as formed by the plant-pathogen interaction. Describing the contributions and interplay of thousands of individual proteins is no trivial task; however, the proteome data identifies major contributors that deserve further discussion and characterization.