Deep eutectic solvents (DES) are eutectic mixtures that present a deviation from the ideal thermodynamic solid–liquid phase behavior, where a significant depression in the melting temperature occurs. If properly designed and chosen, DES may be liquid at room and the human body’s temperatures and display a biocompatible character, thus representing relevant options in the pharmaceutical field. Accordingly, DES have been studied as alternative solvents or in formulations of pharmaceuticals to improve their solubility and stability. Depending on the DES components, these mixtures might exhibit interesting biological activities compatible with several applications. The use of DES as functional agents or as novel liquid forms of active pharmaceutical ingredients (API-DES) with the goal of improving bioavailability, permeability and therapeutic efficacy of a given API stands as alternative strategies in the pharmaceutical field for drug delivery purposes.

The well-known drawbacks associated with solid forms of active pharmaceutical ingredients (APIs) has boosted the search for innovative drug formulations over the years [1]. These drawbacks encompass polymorphism, incomplete dissolution and low bioavailability, and, ultimately, treatment efficacy [2]. Attempting to overcome these limitations, several approaches based on eutectic mixtures and deep eutectic solvents (DES) have been proposed. A eutectic mixture or eutectic system corresponds to a homogeneous mixture of at least two compounds that melts or solidifies at a single temperature that is lower than the melting point of any of the constituents. The lowest possible melting temperature across all of the mixing ratios for the involved component species is known as the eutectic temperature. On the other hand, deep eutectic solvents correspond to eutectic mixtures, but present a strong deviation (negative or positive) from the ideal solid–liquid phase behavior.
Solid dispersion has been one of the most successful methods in improving pharmaceuticals properties; it is based on the drug’s dispersion in a biologically inert matrix prepared by melting or solvent evaporation methods [3], and was first introduced in the 1960s by Sekiguchi and Obi [4]. The authors demonstrated a faster oral absorption profile for sulfathiazole when prepared in a eutectic mixture comprising urea. After this proof of concept, many other APIs have been incorporated in eutectic mixtures and DES, i.e., by dissolving APIs in DES or by using DES in which at least one of the respective components is an API [5][6].
DES were introduced by Abbott et al. [7], in 2003, to describe mixtures of amides with quaternary ammonium salts, with melting temperatures far below those of their pure components and with strong deviations to the ideal solid–liquid phase behavior (Figure 1) [8]. The strong negative deviations observed for some DES can be enough for obtaining mixture compositions with melting temperatures far below room or the human body’s temperature [7]. After this pioneering work, several scientific works and several reviews addressing DES’s definition and related fundamental knowledge, and their applications, have been published [9][10][11][12]. 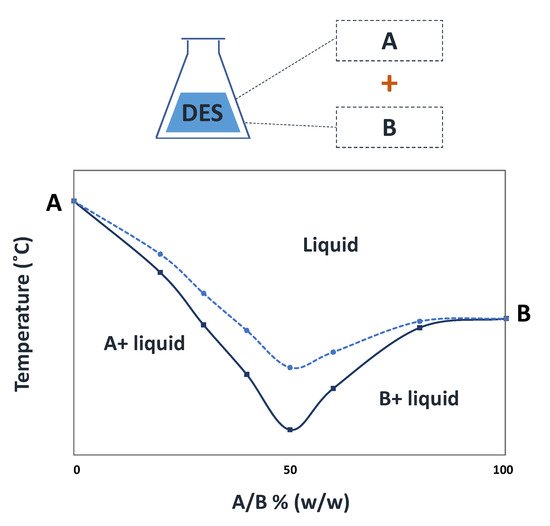 Figure 1. Solid-liquid phase diagram of a hypothetical DES (continuous line) and its comparison with the ideal behavior (dashed line).
DES require the mixture of at least two selected compounds, and can be prepared by heating, grinding, vacuum evaporation or freeze-drying methods [12]. These mixtures can be safely designed for pharmaceutical purposes, namely by the combination of compounds to which safety profiles are already well established and for which use in the pharmaceutical field is already recognized, and are able to be liquid at the temperatures of interest. Accordingly, the adequate selection of the compounds based on their physical–chemical properties, and of their ratio, may allow the tailoring of their solubilization and stabilization potential for a wide range of pharmaceuticals, as well as the creation of DES comprising APIs in their composition (API–DES), where the goal is to decrease the drug melting temperature. Table 1 summarizes some of the DES components and target pharmaceuticals studied up to date targeting these two possibilities.
Table 1. DES application as alternative media for API solubilization and API formulation into its liquid form by the API–DES approach.
Given the versatility of DES, they can be designed to improve APIs performance. Indeed, and as summarized in Figure 2, DES have been studied for applications in the pharmaceutical field, namely to improve the solubility, permeation and stability of APIs envisaging the development of more effective formulations and to produce new liquid forms of APIs (API–DES) [17][18][22]. Since organic solvents have been the first choice for a long time, and the number of acceptable solvents for pharmaceuticals is limited, with several solvent guides available nowadays [23], DES can also be designed to act as suitable benign alternatives within the pharmaceutical industry, i.e., in the APIs’ synthesis (including biocatalytic-mediated reactions), crystallization and solubilization [24]. On the other hand, the API–DES strategy is particularly advantageous for improving drug solubility while avoiding polymorphism concerns [25]. These liquid forms can even be composed of APIs and polymerizable monomers, offering new possibilities for polymer-based drug delivery systems [26].

Figure 2. Different applications of DES within the pharmaceutical field.
The use of DES both as pharmaceutical solvents or as the API itself (using the API–DES approach) plays a key role in the design and development of effective drug delivery systems. DES have been used as media for polymerization processes, to solubilize biopolymers or change the materials properties, providing, for example, plasticizer or porosity enhancer effects or acting as functionalizing agents [27][28]. The numerous possibilities of design drug delivery systems brought by DES while considering their integration, allow researchers to simplify their development and improve therapeutic efficacy.
Due to their advantages, in what concerns the advances brought by DES in drug formulation and delivery, some review papers and book chapters can be found [29][30][31][32] encouraging the expansion of the research in this area and contributing to the correct and rational development of these strategies. Of high interest are the recent advances achieved in the field of computational methods, which represent a step forward in understanding DES phase behavior and the underlying molecular-level mechanisms, permitting a better design of these mixtures for specific applications, while avoiding extensive trial and error methods [33][34]. Below, the main examples found of DES applications within the pharmaceutical field are provided and discussed.