The anaerobic digestion (AD) was first applied to deal with the sewage sludge (SS) produced during the primary and secondary treatment of wastewater, but its use to deal with agro-waste and the MSW with around 70% of organic material has been subsequently encouraged.

The growth of the human population and the change in their diet (e.g., more consumption of animal products) imply devoting more land to food production at an alarming rate [1]. The problem of our current agricultural practices is not limited to land management but also to the unsustainable consumption of essential nutrients for plants, such as phosphorus [2,3]. The fluctuation in prices helps preserve the long-term availability of these mineral resources [4]. In the present situation, the development of profitable strategies for utilizing the waste materials is the only way to achieve sustainable development of the society [5]. Once a material is regarded as waste, its utilization is constrained by regulations [6]. In Europe, all waste-derived products must comply with Directive 2018/851, but there are shortcuts to achieve end-of-waste (EoW) status. Generally, when a residue is produced in large amounts and has a composition suitable for a particular application, the European parliament applies EoW regulations that do not need to be transposed by the governments of each member state [7].
The production of digestate was around 180 million tons per year in the EU28, before the UK withdrawal in 2020 [8]. In the UK, 7.5 million tons of anaerobic digestate and 2.7 million tons of compost were produced in 2018 [9]. A common policy is being developed to improve the management of all nitrogenous materials employed as soil amendments [10,11]. In 2009 [12], the EU27 produced 256 million tons of municipal solid waste (MSW). Much more animal manure is applied to land as a soil amendment than anaerobic digestate because of the high CAPEX and OPEX associated with implementing anaerobic digestion (AD) in the farms [13]. The biological treatment of organic residues via AD is a promising technology for energy recovery in the form of biogas and the production of fertilizers [14]. The AD was first applied to deal with the sewage sludge (SS) produced during the primary and secondary treatment of wastewater, but its use to deal with agro-waste and the MSW with around 70% of organic material has been subsequently encouraged [15,16]. The AD technology fits with the current trends of using the biorefinery to sustainably satisfy the needs of society, which used to be covered by the petrochemical industry [17].
Vassilev et al. [18] estimated that approximately 476 million tons of biomass ash could be generated worldwide annually if the average ash content is 6.8% and the burned biomass is assumed to be 7 billion tons. This amount resembles the 780 million tonnes of coal ash generated every year [18]. According to Pitman [19], the wood ash (WA) production could be estimated by considering that 1% of the wood incinerated is left as ash. According to the UK Forestry Commission [20], 2.68 million tons of wood fuel were used in 2016. Even considering the combustion of other types of biomass, the amount of biomass ash currently produced in the UK is lower than that coming from the coal power plants. In 2016, the amount of coal ash produced in the UK was around 6 million tons [21]. However, this scenario is changing, and by 2025 the amount of biomass ash is expected to be greater than that of coal ash [22]. In 2007, Sweden produced 0.3 million tons of WA, and most of this material was disposed of in landfills [23]. The preparation of a blend of organic manure and ash to enhance the circular economy has been addressed in the literature from several points of view:
The anaerobic digestates, animal manures, and slurries are appreciated by the farmers as organic soil amendments. Improving the nutrient profile of the digestate might be a way of increasing its value and decreasing the cost of transportation. Moreover, there are more urgent challenges that need to be addressed, such as the pollution associated with the use of these materials [10]. It is necessary to optimize the conditions of the WA-based treatment of the anaerobic digestate to improve the stability of the soil organic amendment, improve the nutrient use efficiency, and reduce the contamination of the environment.

The AD process is also known as bio gasification due to the intervention of microorganisms to convert the components of the organic matter to methane and carbon dioxide. The most accepted model, on how the reactions occur in the anaerobic digester in the absence of oxygen, describes 4 different stages: hydrolysis, acidogenesis, acetogenesis, and methanogenesis (Figure 1). The limiting step is hydrolysis, while the methanogenesis is quick, preventing the accumulation of volatile fatty acids (VFA) in the system. In this way, the concentration of VFA in the anaerobic digest ester could be used as an indicator of the correct stationary operation of the bioreactor [17]. 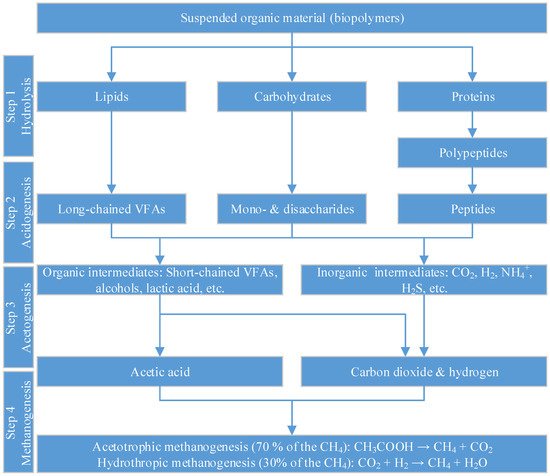 2.2. Use of WA as an Additive for Enhancing the AD

The addition of WA to the feedstock of AD can be understood as a way of promoting the stabilization of the anaerobic digestate because the greater the biogas production during the AD, the lower the emission of methane and carbon dioxide occurrence during storage and land application of the soil organic amendments [30]. Furthermore, Alavi-Borazjani et al. [31,32] provided an insight into the feasibility of the utilization of biomass ashes in AD and biogas upgrading. According to Alavi-Borazjani et al. (2020), biomass ashes are cheap sources of alkali suitable for controlling the excessive acidification of anaerobic digesters. Biogas production is also enhanced due to the supplementation with the macro and micronutrient present in biomass ashes, which are required for the anaerobic microbes, and only a reference of WA was mentioned in relation to the biogas upgrading. Raw biogas of approximately 60% methane does not have enough quality for its introduction into the natural gas grid. Most frequently used purification technologies (water/amine scrubbing, pressure swing adsorption, cryogenic distillation, and membrane) require an excessive amount of energy and chemicals. The main targeted compounds to be removed from the biogas are CO2 and H2S. Given the complexity of the WA, there is a knowledge gap on the absorption capacity of bulk WA, and gathering more information to fully appreciate the valorization opportunities of this material is required [31,32].

2.3. Stability and Maturity of the WA Amended Anaerobic Digestate

In some UK and European regulations, the terms stability and maturity are used indistinctly to describe the properties of a soil organic amendment [8,40,41]. Stability is related to reactions affecting the fate of carbon, which is the most abundant element in organic materials, and the maturity focuses on all the other elements (Figure 2). Some are nutrients necessary for plant growth (e.g., N, P, K, etc.), while others are phytotoxic compounds (e.g., Cd, Hg, Pb, etc.) that limit seed germination and root development. It is important to mention that the excess of any type of nutrients has a detrimental effect on the soil biota. Because nitrogen is the most abundant of these nutrients, its mineralized form, NH4+-N, could measure maturity [42,43,44].
The aim of determining the stability is to determine the fate of the carbon present in the labile and stable organic matter, since the inert organic matter will not suffer any degradation [45]. As displayed in Figure 2, the carbon could be (a) assimilated by the microorganisms for their growth, (b) lost via respiration, also known as carbon mineralization, and to a lesser extent, (c) lost due to leaching of the low organic molecular weight compounds. The carbon use efficiency (CUE) only accounts for the C used for the microbial growth, hence this parameter could be used to directly measure the stability of an organic amendment for more efficient nutrient management. However, the most common way of determining the stability is by measuring the losses via respiration [8,41,46,47,48], although the test is not carried out in similar conditions to the land application but in AD conditions as per the BMP protocol. 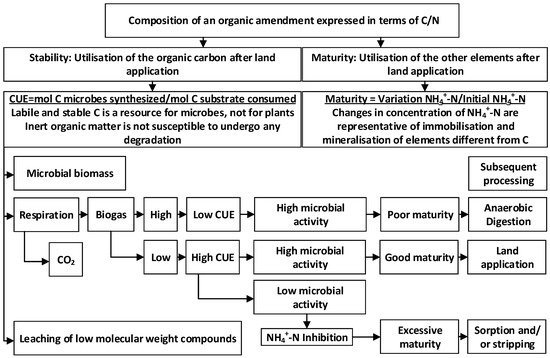 Figure 2. Evaluation of the quality of an organic amendment in terms of stability and maturity [42,49,50,51,52,53].
In a BMP test of an organic amendment (Figure 3), the release of biogas due to microbial activity depended on the composition expressed as the C/N and the relative amount of this material with respect to the microbial biomass (i.e., substrate-to-inoculum ratio, S/I), expressed as organic loading rate (OLR) in a continuous reactor. Together with the HRT, the OLR (Equation (1)) is one of the most important parameters in the operation of an anaerobic reactor, and both parameters are used for the design of the anaerobic digester [54,55]. The scale of the OLR for the operation of a continuous reactor, equivalent to the S/I in a batch reactor. Figure 3 included the OLR in the X axis based on the Figures 4 and 5 of Rincón et al. [56], who reported similar trends of biogas release and vs. removal. Reproduced with the permission of Biochemical Engineering Journal (Elsevier). In their original manuscript, the OLR was expressed on chemical oxygen demand (COD) basis, however, it is recommended to use the vs. instead [57]. 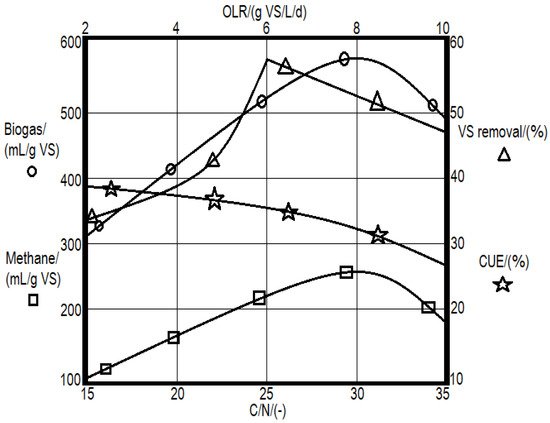 Figure 3. Application of the concept of CUE from soil science to the AD process. The relation between the CUE and the C/N for terrestrial decomposers was taken from the Figure 1a of Sinsabaugh et al. [53]. Reproduced with the permission of Ecology Letters (John Wiley & Sons). The relation between the biogas yield, the methane yield, and the vs. removal with the C/N for the operation of a discontinuous reactor was taken from Figure 3 of Wang et al. [58], who carried out 30-day AD experiments with a S/I of 0.5 (expressed in terms of VS). Reproduced with the permission of Bioresource Technology (Elsevier).