In buffalo, bonding is very particular due to the expression of specific behaviors, such as allo-suckling and communal rearing.

In most mammals, care for the young depends primarily on the mother [1]. She is the most important social contact for the newborn during the first months of life because, in addition to feeding and care, she provides the offspring with the acquisition of important information in relation to the physical and social environment [2][3]. Therefore, the bond that is generated at birth, which is dependent on a learning process known as “imprinting”, which allows the identification of the mother [4], is fundamental for the survival of the young. Imprinting is a learning mechanism which allows the rapid acquisition of a clear and stable preference for a particular type of stimulus to which the animal is exposed during a sensitive period [5][6].

A bonded mother overtly expresses maternal behavior, including suckling, and shows negative behavioral responses, such as increased vocalizations and locomotor activity, in response to separation from her young; responses that decrease after reunion [7][8]. Similarly, the bonded offspring express affiliative behavior toward the mother, and show marked distress when separated from her [8].

The period during which the bond is stablished is known as the “sensitive period”, since it is a limited stage dependent on early learning of sensory stimuli (sight, touch, smell, and hearing) exchanged naturally with the mother or the environment during the neonatal phase [2][3][4]. Any interference in this sensitive period, such as human intervention or some other external stimuli, could lead to the development of an inaccurate imprint and alterations of the bond. An extreme example has been reported in small ruminants by Kendrick et al. [9], who showed that rams that were raised by goats, or goats that were raised by sheep, preferred females of the species that raised them, rather than females of their own species as a sexual partner when adults.

Altered imprinted bonds reduce the newborn’s probability of survival and impair their behavioral development to adulthood [10]. For example, aggressiveness can increase in animals reared in isolation from social groups, which is attributed to the fact that during early stages they did not receive the necessary information or stimulation from the mother and, consequently, did not learn how to react to or interact with conspecifics in situations needing prior knowledge [11][12][13]. Therefore, the quality of the contact with the mothers can also affect the intensity of their future gregariousness as adults and the quality of their relationship with conspecifics [14][15].

2. Sensory Stimulation and Communication during the Imprinting Process

During the sensitive period, numerous sensory communication channels are deployed to ensure mutual recognition between the mother and her offspring [16][17].

Learning is a complex process that involves the acquisition, storage, and retrieval of information, all of which form memory, and consolidate learned behavior [5][18]. The only necessary condition between the association of a stimulus and a response is the close temporal relationship between them. According to Knudsen [19], learning that occurs during the sensitive period has a long-lasting influence on the development of the individual’s social and emotional behavior. During this sensitive period, most newborns have developed vision, hearing, smelling and even touching, in such a way that perhaps imprinting is triggered by the dominant sense of the species at that time [5][6].

Once this link is established, the mother becomes very selective and actively rejects any other unidentified newborn that attempts to suckle [20][21]. In cattle, maternal vision and smell are fundamental factors in establishing the cow–calf bond [22]. In dairy cows, contact for 5 min with her calf immediately after calving is sufficient for the formation of a strong and specific bond between the mother and her calf [23][24]. Although smell is referred to as the most important sensory channel in sheep [25][26] at the beginning of maternal behavior, this cannot be generalized to all species.

Tactile communication involves as main recognition factor the physical contact between individuals, which can even occur due to thermo-reception, as in human babies, sheep, puppies, and piglets. These human and nonhuman animals localize and then identify the mother’s udder/nipple to suckle based on thermo-receptors [27][28].

Licking is essential for the development and strengthening of the mother–calf bond in mammals [29]. The cow usually begins liking her calf from the head, perhaps because removal of the fetal membranes decreases the risk of suffocation. Removal of the amniotic fluids can also help to dry the newborn’s coat, thus reducing heat loss, and stimulating nipple-seeking activity [30], while also allowing the mother to learn the specific odor of her own neonate [31].

Multiparous mothers spent more time licking their calves than primiparous, which suggests a higher degree of maternal care expressed by more experienced mothers [32]. In Italian Mediterranean buffalo the dams mainly groomed the calf during the first six hours after calving, to ensure the formation of the cow–calf bond; thereafter, the behavior decreased over time [33]. Both in cattle and buffalo, cows ingest the fetal membranes during this process of conditioning and cleaning of the offspring, whereas sheep and goats normally do not express this behavior [34][30]. However, in sheep, after the sensitive period, the ewes almost never groom their lambs [35], whereas grooming is quite common in cattle even in adults [36].

Auditory imprinting relies on mother–offspring vocal communication and allows acoustic recognition. The vocalizations emitted by the newborns stimulate care and are important components in the regulation of early interactions in many species, for example, humans [37], bats [38][39], and guinea pigs [40]. Sophisticated recognition strategies have been studied in many social mammals where mother and offspring use vocalizations to find and recognize each other even after long periods of separation [41][42][43][44].

In farmed ruminants, the newborns vocalize a few hours after birth to attract the attention of the mother when they need to be fed or protected [45][32]. In sheep, the mother shows an intense peak of vocal activity during the first three hours after parturition [34]. After this period, the number of vocal events gradually decreases up to 24 h postpartum [46]. In cattle and sheep, auditory recognition tends to be bidirectional between the mother and her offspring, varying with age [44], breed [47], and time elapsed from bond formation [48].

Immediately after parturition, several species of ungulates, including farmed ruminants such as cattle, buffaloes, goats, and sheep are very receptive to the smell of their young [49]. Ewes need two to four hours postpartum to acquire these chemical signals, recognize their lambs and become selective, rejecting all other lambs [50][51]. In a few days, lambs learn to walk ahead of their mothers to be recognized and then take the inverse-parallel position to be definitively identified by their mothers based on the smell originated from the perianal region. In small ruminants, smell ceases to be efficient at distances greater than 0.25 m [52][53] requiring that ewes and lambs stay close to each other during the sensitive period.

During the early postpartum period, cell proliferation occurs in specific areas of the mother’s brain, as well as in the main olfactory bulb. The maternal brain is modified by remodeling neural circuits, especially olfactory structures. This process is called adult neurogenesis, a type of brain plasticity that could constitute an adaptive response to motherhood [26] and could facilitate the development of an olfactory memory. Therefore, it seems that the ability of the olfactory system to generate new interneurons plays an important role in the acceptance and recognition of the offspring during the sensitive period.

In buffalo, the information on visual communication and cow–calf recognition is nil, even though visual cues are commonly used by domestic animals including ruminants, horses, and dogs. Newborns recognize and follow the object or movable entity that provides emotional support, nutrition, and protection. Keller et al. [21] reported that in sheep, the ability to efficiently to recognize their lambs by sight at a distance is higher in multiparous than primiparous ewes.

In summary, it can be hypothesized that, once the maternal–filial bond has been formed, visual and auditory signals are used by mothers and young to orientate and localize the partner as well as for preliminary recognition at a distance, whereas smell is used for the definitive identification, which is performed when the pair is in proximity.

During parturition, estrogens and oxytocin are released [55]. However, after a few hours, the concentration of these hormones decreases. If recognition did not occur during this period, the bond may not be properly established [56].

Estrogens are mainly female steroid sex hormones, produced by the ovaries, the placenta during pregnancy and, to a lesser extent, by the adrenal glands [57]. The possibility of inducing maternal behavior in non-pregnant ewes by injections of ovarian steroids has been investigated by Le Neindre et al. [58], who found clear evidence of the establishment of selective maternal behavior shown by the treated ewes. Other researchers have found that intracerebroventricular injections of oxytocin also induce maternal responses in estrogen-treated females.

Oxytocin is a hormone produced by the supraoptic and paraventricular nuclei of the hypothalamus that is released into the circulation through the neurohypophysis [57]. The role of endogenous oxytocin mediating the onset of maternal behavior has been demonstrated in numerous nonhuman species [59]. Perinatal manipulation of the oxytocin system provides strong evidence for subsequent dysfunctional maternal behaviors [60].

In nonhuman primates, optimal maternal behavior can be altered with an injection of synthetic oxytocin or an antagonist [61]. In the postpartum period, oxytocin can negatively affect anxiety and depression [62]. One of the changes that are believed to be necessary for normal maternal behavior is the decrease in anxiety during the postpartum period [63] allowing the mother to accept more easily an offspring [64].

In the central nervous system, neurons that secrete oxytocin send projections to various sites, including the amygdala, hippocampus, nucleus accumbens, and ventral tegmental area. Oxytocin is released in response to physical and psychological stressors and to various positive or satisfying social stimuli [55]. In both human and animal studies, biological systems that contribute to maternal behavior have been identified, focusing on the oxytokinergic and dopaminergic systems, as oxytocin activates dopamine pathways in response to social cues [65].

Although prolactin is best known for its role in milk production, it also plays an important role in maternal care and parental behavior in birds and mammals [66]. During pregnancy, prolactin concentration increases, stimulating neurogenesis in the subventricular zone of the lateral ventricle of the brain. New neurons produced in the forebrain during pregnancy and lactation migrate to the olfactory bulb where they likely participate in processing olfactory cues received by the new mother as she adapts to the needs and challenges of raising young [67]. Therefore, low prolactin levels during early gestation and the consequent suppression of neurogenesis in the brain are associated with increased postpartum anxiety [68]. 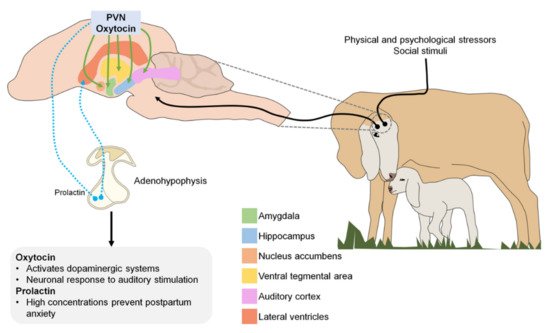