The blood-spinal cord barrier (BSCB) has been long thought of as a functional equivalent to the blood-brain barrier (BBB), restricting blood flow into the spinal cord. The spinal cord is supported by various disc tissues that provide agility and has different local immune responses compared to the brain. Though physiologically, structural components of the BSCB and BBB share many similarities, the clinical landscape significantly differs.

Blood vessels are essential for delivering oxygen and nutrients throughout the body. In the vascular tree, the controlled communication that occurs between blood vessels and components of central nervous system (CNS) is unique. Physiologically, there are three specialised interfaces in the human body that selectively permit entry of nutrients, ions, lipids and small molecules from the blood stream to either the brain (blood-brain barrier; BBB), cerebral spinal fluid (blood-cerebral spinal fluid barrier; BCSFB) or spinal cord (blood-spinal cord barrier; BSCB). Of these the BBB is the most studied and its dysfunction is associated with neurological disorders such as multiple sclerosis (MS), Alzheimer’s disease. and Parkinson’s disease [1]. Recent evidence suggests that BBB dysfunction is an underlying mechanism associated with age-related neuronal deterioration [2].
Drugs such as Natalizumab, a humanized monoclonal antibody acting on the VLA-4/VCAM-1 axis, modulates BBB leakage and inhibits the entry of T cells into the CNS in relapsing MS patients [3]. In Alzheimer’s disease, “Trojan horse” strategies have been used, wherein a two-sided antibody crosses the BBB and degrades β-secretase (a precursor to amyloid β protein) while remaining bound to transferrin receptor with one arm [4]. Clinical trials using strategies such as ultrasound waves to deliver drugs across the BBB are being tested for glioblastoma patients [5]. More recently, in vitro “organoids” representing BBB dysfunction have been developed as a potential platform for drug testing and development of therapeutics [6].

The structural components of BSCB are (see Figure 1): 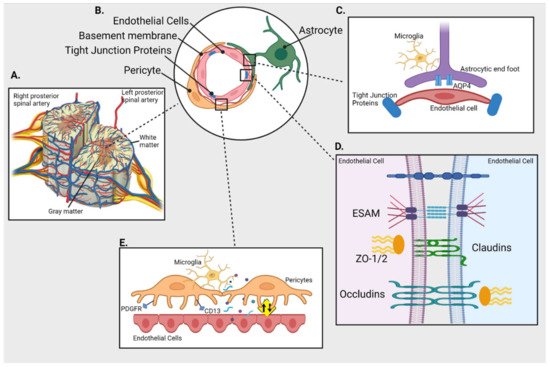 Figure 1. Blood-spinal cord barrier (BSCB) and its cellular components. (A) Cross section of spinal cord and its blood supply (B) Schematics of cellular components of BSCB; endothelial cells (ECs) are separated from pericytes by basement membrane and held together by tight junction proteins (TJs); astrocytes connect with both pericytes and ECs (C) Inset shows interaction between the astrocytic end foot enriched with aquaporin 4 (AQP4) and ECs in presence of immune cells (microglia) (D) Inset shows TJs like endothelial cell-selective adhesion molecule (ESAM), claudins, occludins and Zonula occludens (ZO-1) holding the ECs together (E) Inset represents interaction between ECs and pericytes (expressing PDGFR and CD13) that plays an important role in maintaining the integrity of BSCB by regulating the uptake of circulating macromolecules (presented as yellow sign).

These are the outermost cellular structures that form the first point of contact for any incoming molecule and restrict or allow entry of molecules between the blood and spinal cord. SCMECs act like molecular gateways and restrict the trans-flow of molecules from the blood stream to the spinal cord [7]. Endothelial cells are sealed by tight junctions (TJs) and have limited endocytic vessels. The presence of more glycogen deposits in the spinal cord than the cerebral vasculature could be related to high metabolic activity due to increased number of mitochondria in SCMECs [8].

The basal membrane or basal lamina comprise mainly of laminin, collagens, fibronectins, proteoglycans that provide structural integrity to the abluminal surface of SCMECs. It also engulfs and separates pericytes from endothelial cells and plays a role in blocking the entry of macromolecules [9].

Pericytes are small vessel-walled cells which are crucial for the maintenance of the BSCB. They influence the proliferation, migration, and differentiation of endothelial cells by forming the TJs and flow of soluble factors. Furthermore, pericytes are also associated with the expression and alignment of TJ proteins and reduced uptake of circulating macromolecules thereby maintaining the integrity of the BSCB [1][10][11]. Pericytes are a heterogenous cell population and a universal marker for their identification has not been defined. The most commonly used markers are aminopeptidase-N (CD13) and platelet-derived growth factor receptor (PDGFR) [7].

Adjoining the basal lamina, are astrocytic foot processes that maintain the functional and structural integrity of the barrier characteristics such as polarity, permeability and even re-vascularization [9][12]. These spinal-cord-astrocytes end foot processes also impart neuroprotective mechanisms to SCMECs and also highly express aquaporin-4 and potassium channels Kir4.1 that regulate resting potassium ion conductance and fluid volume in the spinal cord [8].

Though further research is required to identify key transporters; a few studies have identified high expression of the ABC efflux transporter-ABCA2 in the spinal cord [14][15]. More recently, Uchida et al., compared the abundance of transporter proteins in different regions of the brain and showed expression of identical proteins within a twofold range in the BBB and BSCB whilst many other proteins had >twofold lower expression in the BSCB [16].

The BSCB is relatively more permeable compared to the BBB [17]. This can be attributed to differences in the composition of TJ proteins that allows secretory factors to transverse through the interface. This phenomenon was initially evidenced by Prockop et al., wherein elegant experiments showed that the kinetic transfer of [3H]-D-mannitol and [14C]-carboxyl-inulin was higher in regions of the spinal cord compared to the brain in rabbits [18]. Further, permeability of various other cytokines such as IFN-α/γ and TNF-α was higher in spinal cord compared to brain regions [19]. In order to assess the BSCB dysfunction, various tracer dyes and imaging techniques have been used.

Evans blue dye is one of the most extensively used markers/tracers to detect BSCB leakage owing to its strong affinity towards serum albumin minimizing false-negative staining [20]. Extravasation of Evans blue has been used as evidence of BSCB disruption in models of experimental autoimmune encephalomyelitis (EAE) and spinal cord injury (SCI) [21][22]. However, additional evidence shows that Evans blue can bind to other proteins such as globulins, α1-lipoprotein, hemopexin and transferrin raising concerns over detection of barrier leaks [23].

In vivo imaging of the spinal cord is technically challenging given its small size and related motion artifacts associated with cardiovascular and respiratory organs [24]. This is a major reason for limited studies in this field thereby impacting clinical translation. In this respect, a recent systematic review by Bakhsheshian et al. evaluated various in vivo imaging techniques used to assess different diseases. They found that MRI and intravital microscopy (IVM), are the most common techniques used to assess the BSCB in rodent models of EAE and SCI [25].

The cause and effect of BSCB leakage in SCI has been assessed with infiltration of immune cells and activation of certain pathways (e.g., shh/Gli) using techniques such as IHC [26][27]. Using IHC, a direct correlation between expression of vimentin in spinal endothelium and astrocytes and pain has been established in nerve injuries [28].

Electron microscopy has been used to validate polarization of AQP4 in perivascular astrocytes in Theiler’s murine EAE. This technique could also provide insights into the irregular vasculature of astrocytes that contribute to disease severity [29].

Activation of the matrix metalloprotease (MMPs) has been regarded as a triggering event for BSCB dysfunction. Under normal physiological conditions, MMPs play a role in processes such as tissue morphogenesis, angiogenesis, cell migration, wound healing and inflammation. However, their role also encompasses degradation of various components of the extracellular matrix (ECM) thereby permitting infiltration of cells, leukocytes, etc. to breach barriers such as BBB and BSCB [30][31]. MMP-3 and -9 are regulated via up-regulation of histone H3K27 demethylase Jmjd3 leading to loss of TJ proteins and increase in BSCB permeability [32][33].

ALS is a fatal neurodegenerative disease characterised by motor neuron degeneration in the brain and spinal cord, causing progressive paralysis and premature death typically within 3–5 years from diagnosis [34]. The majority of ALS cases (90–95%) are sporadic (sALS) and arise from an unknown origin, while the remaining 5–10% are genetically linked or familial ALS (fALS). Of fALS cases, 20% are associated with a missense mutation in the Cu/Zn superoxide dismutase 1 (SOD1) gene [35][36].

Disruption of BSCB has been thought to be one of the earliest events following PNI. Initial evidence by Echeverry et al. [37], showed induction of neuropathic pain was due to recruitment of spinal blood borne monocytes/macrophages as a result of BSCB leakage. This was evidenced by presence of variably sized tracers (Evans blue/sodium fluorescein) found until 4 weeks post injury. This impairment of BSCB resulted from the release of a chemokine, monocyte chemoattractant protein-1 (MCP-1), from damaged neurons which regulates permeability in a transient and restricted manner as well as acting as a trigger for microglial activation that initiates neuropathic pain [38].

A recent finding by Piekarz et al. [39] shows significant loss (up to 41%) of alpha motor neurons (α-MNs) with increasing age in mice. In addition, loss of myelin, compromised neuronal viability, increases in the age-related inflammation marker soluble ICAM-1 and the apoptotic marker caspase-3 are all indicative of the degenerative impact of aging on the spinal cord.

Though the impact of obesity and metabolic syndromes such as diabetes have not been studied on the BSCB, evidence from the BBB suggest that related inflammation can cause impairment. Alterations in BBB transporters such as P-glycoprotein, low density lipoprotein receptor-related protein 1 and insulin transporters along with up-regulation of MMPs affect TJ proteins thereby causing BBB permeability [40]. However, in the BSCB, the little evidence that exists suggests that spinal cord dysfunction such as in SCI may significantly increase the risk of type 2 diabetes [41].