Both exposure to higher levels of polluted air and physical inactivity are crucial risk factors for the development and progression of major noncommunicable diseases and, in particular, of cardiovascular disease. While regular physical activity is well known to improve general health, it may also increase the uptake and deposit of air pollutants in the lungs/airways and circulation, due to increased breathing frequency and minute ventilation, thus increasing the risk of cardiovascular disease.

Physical inactivity is among the leading risk factors for major noncommunicable diseases, including cardiometabolic disease and cancer. The beneficial health effects of physical activity are well known, with further positive impacts on mental health, quality of life, cognitive function, and healthy weight [1]. On a global scale, more than every fourth adult is insufficiently physically active, which means that they do not achieve the minimum recommended level of 150 min of moderate intensity or 75 min of vigorous intensity physical activity per week, as indicated by recent data from Guthold et al. [2]. Environmental factors, such as air pollution, heavy metals, pesticides, and traffic noise, are increasingly recognized as endocrine disruptors that contribute to cardiometabolic diseases such as metabolic syndrome and type 2 diabetes [3,4,5,6]. Likewise, the World Health Organization (WHO) concludes that air pollution is a major contributor to the global burden of disease, with 9 out of 10 people worldwide breathing polluted air, exceeding the WHO guideline values for ambient air quality [7]. Both air pollution and physical inactivity were demonstrated to cause excess deaths from noncommunicable diseases, including cardiovascular disease, respiratory disease (mainly induced by air pollution), type 2 diabetes, and certain types of cancers [8]. Especially, the risk for diabetes is largely increased in areas with polluted air [9,10], with a central role for low grade inflammation and altered lipid metabolism by air pollution constituents [11]. For comparison, WHO estimated that ambient air pollution was associated with 4.2 million deaths in 2016 [12], while insufficient physical activity accounted for 3.2 million deaths for the same year [13]. Of note, we recently used a novel hazard ratio function, the estimate of the Global Exposure-Mortality Model (GEMM), to reveal 8.79 million global premature deaths in 2019, as well as 790,000 excess deaths per year in Europe, attributable to air pollution, thus greatly exceeding the calculations from WHO [14]. The interplay between air pollution and physical activity and the joint effects on health outcomes constitute an emerging area of investigation with important public health implications. For instance, higher air pollution may interfere with physical activity behavior, as it could create a barrier for doing physical activity that is, importantly, not restricted to outdoor environments as outdoor and indoor environments are fundamentally connected [8]. These circumstances lead to a key question—should physical activity be encouraged in areas with polluted air? While regular physical activity is in general regarded to improve somatic and mental health, it may also influence the uptake and deposit of air pollutants in the lungs and airways due to increased breathing frequency and minute ventilation, thus increasing the risk of several noncommunicable diseases, mainly from cardiorespiratory origin [15].

2. Pathomechanisms of Air Pollution with Focus on Oxidative Stress and Inflammation 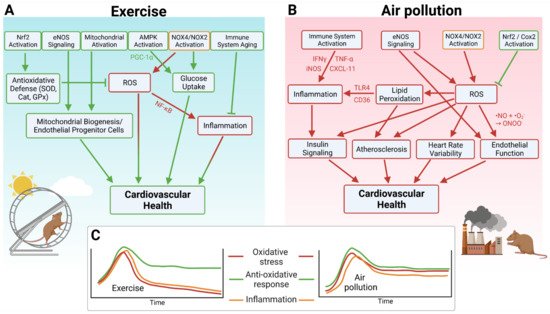 3. Key Mechanisms of Antioxidant and Anti-Inflammatory Effects of Physical Activity 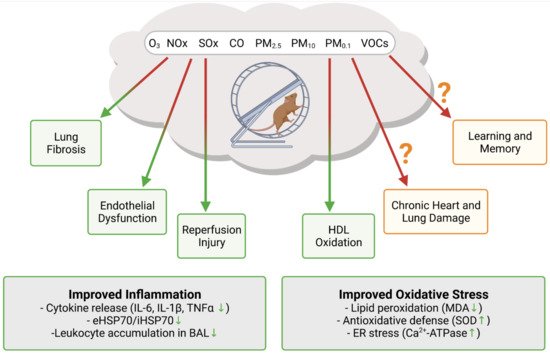 Figure 2. Insight into the synergistic effects of exercise and air pollution exposure from animal studies. Exercise was shown to offset air pollution mediated increase in oxidative stress and inflammation. It is still not clear if exercise in polluted air can ameliorate the detrimental effects of air pollution in the long term. Created with BioRender.com, accessed on 4 November 2021.