Isolates of Trichoderma spp., a soil fungus, has been used to control diseases and promote plant growth, reducing the use of chemicals in the production of seedlings of different plant species. We evaluated the effect of some Trichoderma spp. isolates on seed treatment and seedling production of Theobroma cacao. Five isolates from the Amazon region were tested. In laboratory, the following variables were evaluated for seed treatments: germination, germination speed index, radicle and hypocotyl lengths, and fungi incidence. In nursery, the following forms of application were tested: via seeds; in the substrate at pre-planting; monthly in post-planting substrate, and also their combination. The following was evaluated: height, diameter, number of leaves, root length, leaf area, and shoot dry mass and root system. Inoculation with Trichoderma increased the length of the radicle and hypocotyl and showed no fungi in the seeds. In seedlings, some treatments increased height and plant root dry mass. The use of Trichoderma was beneficial for seeds and appeared favorable for T. cacao production.

Recently, an increase in the use of biological agents in agriculture has been observed [1][2], which consists of the application of microorganisms or their metabolites to protect seeds and promote germination and plant growth and management of different pathogens and pests [3][4]. Among the microorganisms that can be used, several isolates of Trichoderma spp. showed different mechanisms of action, such as antibiosis, mycoparasitism, competition, resistance induction, and growth promotion, in addition to solubilization of nutrients [5][6][7][8]. These properties provide productive and economic gains in the process of growing important crops.
Cocoa (Theobroma cacao L.) is a species of great economic and social importance globally. Worldwide, cocoa-producing areas occupy approximately 6.7 million hectares, with an estimated production of 4.7 million tons, generating a revenue of approximately 8.6 billion dollars per year [9]. In Brazil, this crop gained prominence with the expansion of chocolate consumption. Its cultivation represents a good example for composing agroforestry systems, as it can be cultivated under the shade of the thinned native forest (“cabruca” system) in association with other species, without the need of deforestation [10].
Pests and diseases affect cocoa crops strongly, constituting a major problem for producers [11]. The use of agrochemicals, applied from seed treatment and seedling preparation through cultivation to post harvest, has caused serious problems of environmental contamination, and therefore, products in favor of sustainable agriculture have been studied and developed.
The use of Trichoderma spp. on T. cacao has mainly been studied for disease control [12]. However, this fungus can also promote the development of seedlings and root systems in addition to delaying drought responses when plants are subjected to water stress [13]. Thus, research is important to identify Trichoderma isolates that are efficient and adapted to the environmental conditions of the producing region, which can be used for treating seeds and seedlings and in the development of cultivated plants.
The sanitary quality of seeds is essential for the production of healthy and vigorous seedlings [14] and for the production of quality, vigorous, and pest and disease-free seedlings with good adaptation and field growth [15]. Thus, the treatment of seeds and seedlings with Trichoderma spp. is an alternative that can generate good results in different plant species, as it is considered sustainable.
Our hypothesis was that the application of Trichoderma stimulates the germination of cacao seeds and the initial growth of seedlings, reducing the time the plants remain in the nursery, ensuring quality seedlings. In this article, we evaluate the effect of five Trichoderma isolates in different application modes on seed treatment and development of T. cacao seedlings.

There was a significant difference for the radicle and hypocotyl length and the incidence of fungi. In all treatments, germination was greater than 95% (Table 1). Trichoderma did not influence germination speed compared to control.
Table 1. Germination and germination speed index (SG) and radicle and hypocotyl lengths of Theobroma cacao seeds treated or not with different Trichoderma isolates. Incidence of fungi represent the % of seed contaminated with other fungi.
CV, coefficient of variation; means followed by the same letters in the columns do not differ from each other by the Tukey test (p ≤ 0.05).
All Trichoderma isolates increased radicle length compared to the control (Table 1, Figure 1), ranging from 1.9 to 3.1 cm, corresponding to an increase from 158% to 258.3%, respectively. For the length of the hypocotyl, there was a significant difference except for the seeds treated with isolate Tam02, which did not differ from the control (Table 1). The increase in hypocotyl ranged from 0.9 to 1.3 cm, representing an increase from 69.2% to 100% for the Tce and Tc isolates, respectively.

Figure 1. Radicle and hypocotyl lengths of cocoa seedlings resulting from seeds treated or not with different Trichoderma spp. isolates.
The incidence of other fungi was observed only in the control treatment, with 26.5% of contaminated seeds (Table 1). They did not affect, however, the germination of seeds.

3. Trichoderma spp. in the Production of T. cacao Seedlings

A significant difference for the height and root dry mass of seedlings, at three and six months, was observed (Table 2).
Table 2. Height (cm), diameter of the collar (mm), number of leaves per plant, dry mass (DM) of aerial shoot and root system (g), root length (cm), and leaf area (cm2) of Theobroma cacao seedlings submitted to different application modes and Trichoderma spp. isolates.
* Significant; ns, not significant; by Dunnett test (p < 0.05). Tc, Trichoderma sp.; Tce, Trichoderma sp.; Tam01, T. asperellum; Tam02, T. asperellum; Tam03, T. asperellum.
Two Trichoderma isolates increased plant height compared to the control. They were T. asperellum Tam01, applied monthly to the substrate after planting in the two evaluation periods, and T. asperellum Tam02, applied to the seeds in the evaluation at six months only (Table 2, Figure 2). The increase in height provided by Tam01 achieved 4.4 cm at three months and 5.8 cm at six months, corresponding to an increase by 17.2% and 20.4%, respectively. For Tam02 applied to seeds, the increase in height was 5.9 cm (20.7%) when compared to the control. 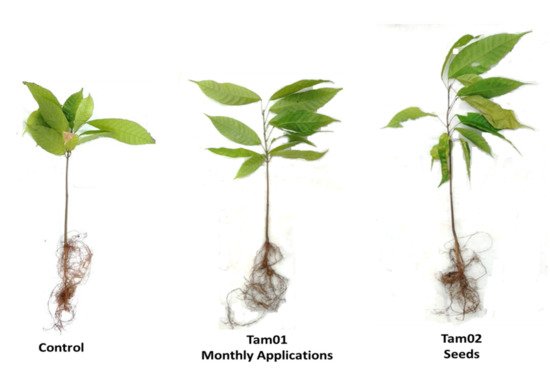 Biological agents applied to seeds and seedlings are important components of sustainable agriculture strategies. In this study, Trichoderma spp. natives of the Amazon region were used in cocoa, a naturally occurring species of this biome.
Although Trichoderma isolates did not increase germination parameters compared to the control, they positively affected seedlings growth. Data indicate a healthy condition of the seeds used, showing an average germination close to that of newly harvested fruits of this species, which can reach 100% [16]. This was likely due to storage lipids that act as carbon and energy reserves for embryos to germinate, favoring high germination rates [17]. On the opposite, the storage of seeds for long periods of time affects germination, as seeds do not tolerate dehydration or low temperatures [18].
Biological treatment positively influenced other variables related to cocoa seed germination, such as radicle and hypocotyl length. Data showed that the greatest increase in radicle length was 3.6-times higher than the control and twice the hypocotyl length. Indoleacetic acid (IAA) appears as a possible effector in this interaction. Root exudates are sources of the amino acid L-tryptophan, a precursor for IAA biosynthesis by the rhizosphere microbiota [19][20]. IAA regulates several stages of plant growth and development, such as cell elongation and division, tissue differentiation, and apical dominance [21]. In addition to auxins, cytokinin produced by microorganisms promote plant growth and cell division [22]. The effects observed on shoot growth may be hence related to the production active effectors translocated from the roots to the shoot and induced by auxin-producing microorganisms that thus stimulate the root system [23]. The production of auxins by Trichoderma spp. has already been shown [24][25].
There are several reports indicating a biostimulation effect induced by Trichoderma spp. Seeds of Theobroma grandiflorum, a relative of cocoa, treated with isolates of T. asperellum showed an increased length of the radicle in the seedlings but no effect on germination parameters [26]. Moreover, the incidence of fungi was observed only in untreated seeds, demonstrating the efficiency of Trichoderma in controlling fungi naturally occurring in cocoa seeds. Similarly, in T. grandiflorum, no fungi were observed in seeds treated with the same Trichoderma isolates herein evaluated [26].
The absence of harmful fungi in seeds is important for developing of healthy seedlings and for their survival in the field. Among seeds colonizing fungi, species of Aspergillus and Penicillium have been reported as potential producers of mycotoxins in cocoa beans [27]. Seed treatments are important to reduce or eliminate microorganisms that can harm the seeds and affect the initial development of seedlings. Additionally, since Trichoderma spp. includes important biocontrol agents, biological treatments appear useful to protect the young plants from the attack of pathogens already present in the soil.
Identifying the ideal conditions for seed germination is an important factor to ensure uniform production of quality seedlings and for the establishment of a standard in the field production [28]. In the nursery assay, only two Trichoderma isolates applied in seeds and in the post-planting substrate influenced height (Tam01 and Tam02) and root dry mass (Tam01). Differences in isolates efficiency may be related to different mechanisms of action in plant growth promotion and biological control that may vary according to environmental conditions (substrate, nutrients, other microorganisms), species, or association with the host plant [29].
Growth promotion is not a general feature for all Trichoderma spp., as different effects on plants have been observed. In addition, promotion variability may be related to and influenced by environmental factors [30][31]. In a collection from Colombia, 60% of Trichoderma strains produced IAA derivatives in vitro, but only 18% showed plant growth effects on beans [32]. In addition to this, auxins and volatile organic compounds have been described as growth-promoting inducers in fungi, including Trichoderma [33]. Evaluation of Trichoderma spp. isolates in Jatropha curcas and Ricinus communis showed negative effects for some isolates on the diameter, number of leaves, and dry mass of the aerial part and root system of plants [34]. A promotion effect on root dry mass and height were instead reported in Gochnatia polymorpha plants treated with Trichoderma harzianum [29]. Seedlings of Handroanthus serratifolius (yellow ipe) treated with Trichoderma showed increased height, stem diameter, number of leaves, and root dry mass compared to the control [35]. Increased height of plants treated with Trichoderma was also found in Khaya ivorensis and Eucalyptus camaldulensis, with increased number of leaves and higher shoot and root dry mass, and Pinus radiata [36][37][38].
The 64% increase in root dry mass observed in the treatment with Trichoderma Tam01 isolate and applied in a triple combination (seeds + pre-planting substrate + monthly applications in post-planting substrate) is a promising result. The plant’s investment in root growth is one of the main benefits attributed to microorganisms that produce IAA. For young plants, the growth and establishment of roots is essential, as the increase in root biomass promotes adherence to the substrate and greater absorption of water and nutrients. These effects increase nutrients accumulation and cell multiplication through the production of hormones and other metabolites, consequently increasing the chances of survival in the field [39][40][41][42][43][44][45][46].
The application of Trichoderma Tam01 isolate in the pre-planting substrate combined with applications in the post-planting substrate also positively influenced the development of Euterpe oleracea seedlings [2]. The use of Trichoderma in the pre-planting substrate increased the height, stem diameter, and number of leaves of E. schomburgkii seedlings [47]. Trichoderma spp. used in seeds or in combination with substrate application were also effective on seedlings of Khaya ivorensis [36]. In seedlings of Parapiptadenia rigida, the application of Trichoderma via seeds showed the greatest increase in plant height [48].
Trichoderma spp. have potential for application with several purposes, such as biological control of plant diseases, production of enzymes for industries, and other fundamental aspects, such as increasing the efficiency of nitrogen use, promoting the development of plants, as well as productivity and alleviating the impacts of salt stresses [49].