Antibiotics are commonly used in hospitalised children [1][2][3]. A one-day point-prevalence study reported antibiotic use in approximately 40% of all hospitalised children in European and non-European hospitals [1]. Another retrospective cohort study of 40 US children’s hospitals found that 60% of all children received at least one antibiotic during their hospital stay, representing up to 601 antibiotic days per 1000 patient days [2]. The highest rates of antibiotics use have been reported in critically ill children and patients admitted to the hemato-oncology ward [1]. Up to 57–79% of all patients received antibiotics during their stay at the pediatric intensive care unit (PICU) [4]. Of the five drugs most commonly administered to neonates admitted in a neonatal ICU (NICU), three are antibiotics (ampicillin, gentamicin, and vancomycin) [5].
The decision on the timing of prescription (when), the choice of the antibiotic(s) (what), and appropriate dosing (how much) to achieve sufficient exposure are crucial determinants for successful antibiotic therapy [6]. Pharmacokinetics (PK) and its variability mainly relates to the ‘how much’ question. It is commonly accepted that adequate exposure above a critical target or within a given range is required for successful (effective and safe) antibiotic therapy [7]. Hence, knowledge of the processes that lead to drug exposure after its administration is essential to select the most appropriate dosing regimen. These processes consist of absorption, distribution, metabolism, and excretion to characterise the pharmacokinetics of a drug. In the setting of pediatric or neonatal intensive care and critical illness, these processes are modulated by both maturational (age, weight) as well as non-maturational (disease, therapeutic interventions) covariates.
Children show important developmental or maturational changes, which may contribute greatly to PK variability observed in pediatric patients [8][9]. Standard weight-based dosing regimens have been shown to lead to suboptimal exposure in certain pediatric patient populations [10][11], so that organ function should be taken into account to optimise pediatric drug dosing, also when the focus is on antibiotics [12][13]. These PK alterations are further enhanced by disease-related or non-maturational factors. Specific to the intensive care setting, such factors include critical illness, inflammatory status, augmented renal clearance (ARC), as well as therapeutic interventions (e.g., extracorporeal organ support systems or whole-body hypothermia [WBH]) (Figure 1) [14]. 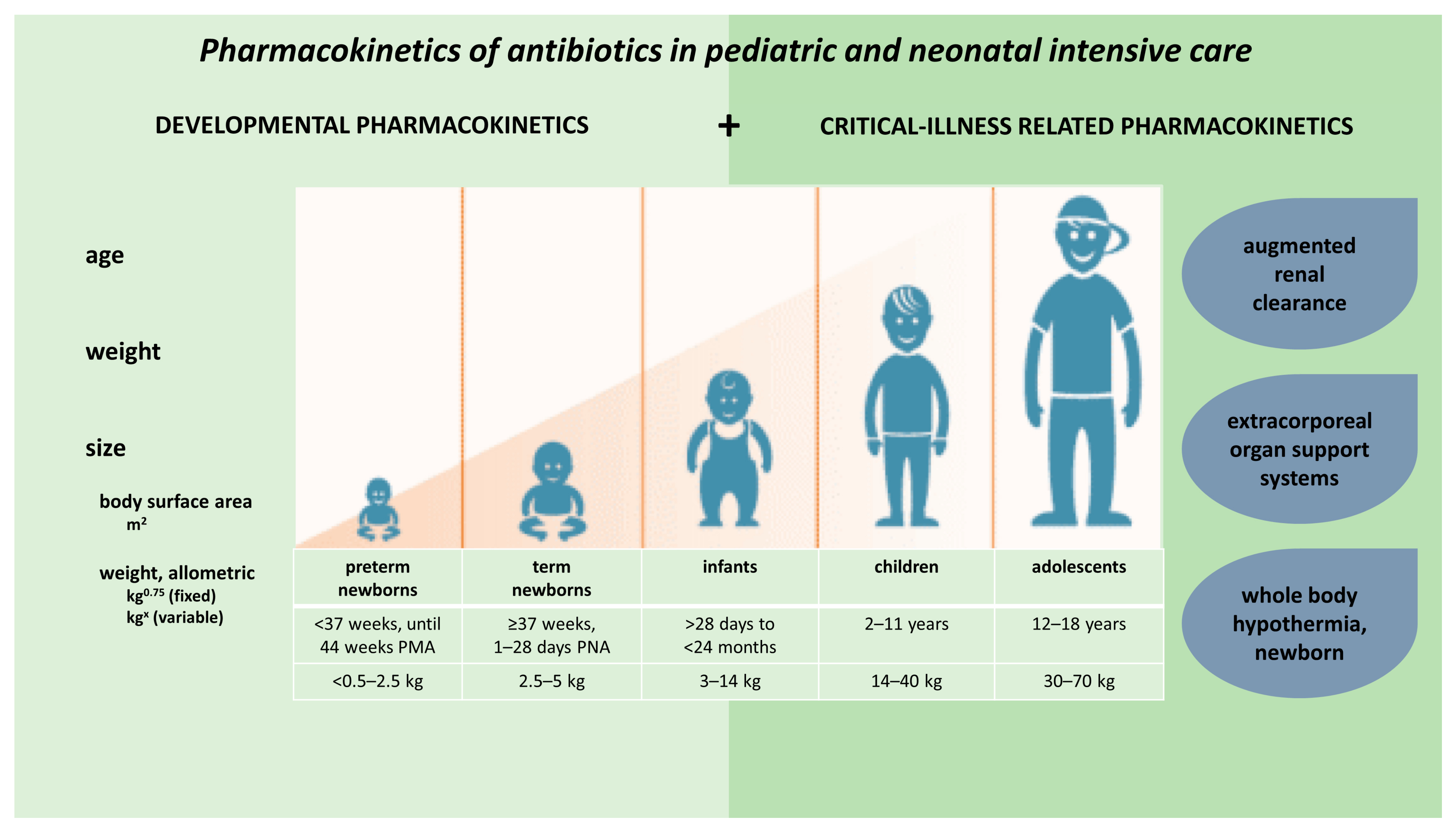 Figure 1. Illustration of developmental and critical-illness related pharmacokinetic alterations in children and neonates.
Most drugs—also antibiotics—have been developed in and for adults, with subsequent extrapolation of dosing regimens to children. Pediatric antibiotic trials are seldom performed due to ethical, practical, and economic considerations [8]. This is evidenced by a recent report of Thaden et al., who reviewed all pediatric trials registered in clinicaltrials.gov between October 2007 and September 2017 [15]. Less than 1% of all pediatric trials (122/17,495) were industry or US government-funded trials investigating systemic antibacterial or antifungal drugs. Consequently, off-label (dose, indication, formulation) prescription is very common, be it that recommendations on how health care professionals can handle this setting have recently been published [16][17]. It has been suggested that certain pediatric patient populations may benefit from individualised dosing to increase target attainment, while minimizing the risk of unnecessary toxicity, using model-informed precision dosing (MIPD) concepts in these populations [11][18].

Developmental pharmacology describes the impact of maturation on drug disposition (PK) and drug effects (pharmacodynamics [PD]) throughout the pediatric age range (0–18 y) [19]. There is regulatory guidance to support pediatric drug development within a generic framework, also applicable to antibiotics [20]. This framework is based on 3 pillars, related to: (i) disease progression similarity between adults and children; (ii) the similarity in response to intervention between both, and (iii) the availability of relevant and valid PD markers (biomarkers, outcome variables). Applying this framework to antibiotics, regulatory bodies currently consider it to be reasonable to assume similarity on antimicrobial PD between patient populations (concentration-response) because the treatment is aimed at the infectious organism, not the host (adult or child) [19][20]. Consequently, differences in PK and safety are the primary focus to optimise drug development programs and antibiotic utilization in neonates and children.
A recent ‘throughout-life’ PK modelling effort on vancomycin hereby illustrated that the current dosing recommendations (Food and Drug Administration label) commonly resulted in underexposure, with the highest probability in children and adolescents (70%), except in newborns, while the label remains very descriptive on dosing in preterm neonates [21][22].
Absorption: the impact of gastrointestinal variability on oral drug absorption and the relevance of developmental changes (gastric pH, gastric emptying, gastric fluid composition, intestinal and colonic transit time, first-pass metabolism, pancreatic function) has recently been reviewed [23]. A systematic review recently reflected on these changes and assessed the available evidence on the switch from parenteral to oral antibiotics in neonates. Based on 31 studies and compared to parenteral administration, oral antibiotics generally reached maximum concentration later and had a lower bioavailability. However, in the majority of studies, adequate serum levels were reached, so that early switch could be beneficial when considering health economics and the burden to the patient and family [24].
Distribution: throughout infancy, the extracellular and total body water proportions are higher, and this results in higher volumes of distribution (Vd) and lower (peak) concentrations for water-soluble antibiotics (e.g., aminoglycosides, vancomycin, beta-lactams) when administered on an mg/kg basis. Table 1 summarises maturational changes in body water composition, while Figure 2A illustrates the impact of the body water composition on the Vd (L/kg) for a water-soluble antibiotic (amikacin) [25][26][27][28]. These patterns can be further affected by disease-related aspects, similar to those observed in adults, as, e.g., Lingvall et al. described that the Vd of gentamicin was significantly higher (+14%) in septic compared to non-septic neonates [29]. Table 1 also summarises the maturational trends in plasma protein composition, as this determines the drug-binding capacity and free concentrations, as illustrated for, e.g., cefazolin or vancomycin [30][31][32]. Competitive binding of co-administered drugs or endogenous substances (indirect bilirubin) may occur and explains the contraindication for ceftriaxone in neonates [33].

Figure 2. Illustration of maturational changes of (A) volume of distribution (Vd, L/kg) and (B) clearance (CL, L/kg/h) with the trend lines, based on amikacin pharmacokinetic data in 155 patients (body weight 1.35–33 kg) in the first 85 months of life [28].
Table 1. Maturational changes in physiologic variables relevant to the distribution of antibiotics [25][26][27].
Elimination: the main route of elimination of most antibiotics is by renal excretion, determined by both glomerular filtration rate (GFR) and renal tubular activities (secretion, reabsorption) so that pharmacometric approaches to personalise the use of primarily renally eliminated antibiotics in a pediatric and neonatal ICU setting should focus on renal models and renal (patho)physiology [13]. A maturational human renal function with a sigmoid hyperbolic model has been described so that half of the adult value is reached at 48 weeks postmenstrual age to be at 90% of this value at the end of infancy, even when an allometric coefficient (kg0.75) was used [34]. When based on body weight, the steep increase in clearance (CL) in infancy is even more pronounced. Figure 2B illustrates this maturational pattern in CL (L/kg/h), based on a published amikacin dataset [28]. Along the same line, and based on datasets of gentamicin, tobramycin, and/or vancomycin, semi-physiological functions for GFR maturation throughout human life have been constructed [21][35]. When scaling of CL was based on these GFR maturational models, maturational changes in plasma protein concentration only marginally affected renal clearance, except for drugs highly bound to alpha-1-acid glycoprotein [36]. In contrast, the contribution of active tubular secretion to overall renal clearance can range—depending on drug-specific PK properties—between 41 and 90%, so that ontogeny of tubular secretion cannot be ignored, not even in infants [37].
Such semi-physiological functions are relevant to truly assess the impact of non-maturational factors. Besides aspects related to the critical illness that will be discussed below, this also includes co-administration of nephrotoxic drugs, like non-steroidal anti-inflammatory drugs (ibuprofen, indomethacin), commonly administered to induce closure of a patent ductus arteriosus. Using the impact of those drugs on aminoglycoside or vancomycin CL, the transient reduction in GFR during ibuprofen or indomethacin administration is −20 and −40%, respectively, in the newborn [38][39].