Fuel cell technologies are capable of providing very high efficiency, minimum pollution, and high reliability [5][6]. The technology is applied in industries ranging from a distributed generation for power companies [7][8][9], to residential and industrial co-generation [10], portable generation [11], and vehicles [12]. The fuel cells are receiving considerable attention as they constitute, thanks to their ability to optimally use hydrogen [13], the key technology for the development of this energy carrier [14][15]. The design parameters for the stationary fuel cell system differ for fuel cell technology (PEM, AFC, PAFC, MCFC, and SOFC), as well as the fuel choice and supply [16].

Hydrogen, intended as an energy carrier, can provide and release energy via different methods and through several systems:
In terms of flexibility of applications, potentials, and integration with several energy systems, hydrogen adopted as reactant and reductant gas in fuel-cell-based energy systems is generally the most efficient and cleanest technology for releasing energy from hydrogen [17]. In a fuel cell, gaseous hydrogen and gaseous oxygen are combined in a catalyzed electrochemical reaction, producing electricity, water, and heat. This process can achieve higher efficiencies, both electrical and thermal, than those of internal combustion engines while being pollution-free [18].
In more detail, a fuel cell is an electrochemical device that uses hydrogen as chemical input and reductant, reacting with an oxidant to produce electrons, protons, heat, and water [19]. Fuel cell operation is based upon the redox reaction, shown in Equation (1), where both reduction (at the cathode) and oxidation (at the anode) takes place, producing an ideal electromagnetic force, in standard condition, of 1.229 V [20].
The system provides then electricity via an electrical circuit with a DC load. Problems arise when fuel cells are manufactured. More in detail, the electrochemical reaction needs a consistent area of contact, while normally fuel cells have a very small area of contact between the electrolyte, the sites of the electrode, and the flows of reactant gases [21][22]. Moreover, the geometric distances between the electrodes introduce resistances in the fuel cell operation, reducing the production of electricity. Therefore, to address these problems, fuel cells have been manufactured with improved design and new approaches to tackle these issues [23][24][25]. Among the common solutions, there is the adoption of porous electrodes and a thin electrolyte, to reduce the electrical resistances [26]. The porous structure allows interaction among gas, ions, and electrolyte molecules to occur more effectively, improving the electrochemistry of the cell [27]. In this way, the contact area is maximized, guaranteeing better performance, efficiency, and current production [28].
The major disadvantage of the fuel cell is that the technology currently presents a more expensive capital expenditure than other forms of power conversion [29][30]. Once this barrier is overcome [31][32], thanks to the economy of scale and the adoption of cost-reduction actions, it is worldwide recognized that fuel cells will eventually become a dominant and efficient solution for energy conversion. Indeed, these technologies have an efficient operation, almost zero acoustic emissions and, if powered with green hydrogen, and zero polluting emissions [18]. Sound pollution is extremely important in on-site applications [33] and mobility [34][35]. By considering the current state of the art, fuel cells operate with an electric efficiency of about 40–50% and overall efficiency in cogeneration assets (production of combined heat and power) of more than 80% [36][37]. Their performance is indeed higher if compared to CHP internal combustion engines. Fuel cells have no moving parts, such as pistons, and for specific fuel cell types, most of the components are entirely made of solids, which simplifies the manufacturing process. Depending on the fuel cell type and the supplied fuel, the emissions can vary, but falling below the existing standards of emissions. Generally, a fuel cell system emits “<1 ppm of NOx, 4 ppm of CO, and <1 ppm of reactive organic gases” [38]. All of these features make fuel cell technology an attractive and efficient solution in different energy sectors [39].
There are several types of fuel cells, according to the technology adopted and on the operating parameters, as shown in Figure 1, and the final application depends on the fuel cell chosen type and configuration [40].

Figure 2 summarizes the shipments per fuel cell type [41]. While PEMFC seems to have a steady decreasing trend until 2018, in 2019 and 2020, PEMFC installations increased, thanks also to a new demand required by the mobility sector. The market is showing how big efforts are ongoing to strengthen the market for SOFC, since their performance is better and they possess high modularity and flexibility, leading to a wide range of applications. DMFCs are used for mobile and stationary applications, while AFC and MCFC had very few installations. However, their resulting size was bigger (MWs), as highlighted in Figure 3. MCFC had a high level of research interest until 2014 [42][43][44][45], but the trend is now decreasing. MCFC installations in 2018 [46] were slightly more than 25 MWs, while in 2020, they decreased down to 8.8 MWs. Even if PEMFC installations decreased until 2018, their size installation presents an increasing trend, a signal of their technology maturity. AFC installations are infrequent, while Korea has the leadership on PAFC installations. The PEM fuel cell is indeed used in several applications (both stationary and mobile applications), and it contributes to the highest number of installations. SOFCs (more shipments at lower size) and PAFCs (low shipments at higher size) had a slow implementation in 2014, but their trend is increasing. 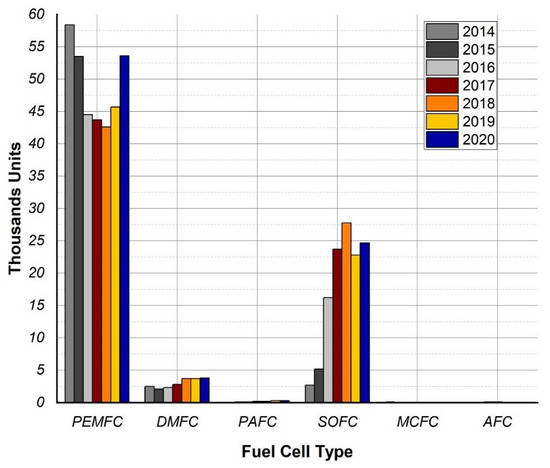 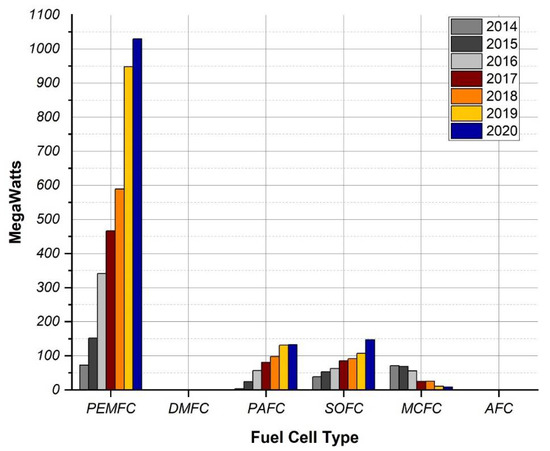 Other niche applications based on fuel cell technologies are BUP and UPS, as well as hydrogen boilers using catalytic burners/hydrogen gas turbines. For the latter, few references and available performances have been found, since the market is probably still too small.
Hydrogen Europe [47][48] has drafted a roadmap for new hydrogen technologies and R&D actions, since they could reveal themselves as the best options when CHP installations are not economically viable. For UPS, in the IEA Hydrogen and Fuel Cells roadmap [49], small uninterruptible power systems for backup power are considered key factors for autonomous power systems for either stationary or portable off-grid applications, but few commercial applications have been found.
The mobile telecommunication industry is an example of a sector that needs backup and off-grid power, with an estimated 7 million stations worldwide, increasing every year by 100,000. For these applications, fuel cells can offer more reliable and stable operations, given their resilience to harsh environmental conditions rather than batteries, without the need to add extreme cooling equipment and withstand severe environmental conditions without affecting their performance.
Recent research trends pursue the possibility of blending green hydrogen up to a volume of 20% into natural gas pipelines. Current levels are about 5%, assuring between 32 and 58 kg of avoided carbon dioxide emissions per year and per household.

5. Breakdown of the Current Costs

The main sectors where stationary fuel cells have been employed are micro-CHP and large stationary applications. With particular attention to the building sector, fuel cells were suitable for micro-cogeneration: these energy systems inherently produced both electricity and heat from only one source of fuel, which could be innovative and more efficient, even if more expensive, such as hydrogen, but these systems can also operate by adopting traditional fuels, such as biogas, methane and natural gas, after being properly reformed.
For building applications and micro-cogeneration, PEMFC systems are the most common fuel cell type used and installed, being more mature than other technologies, and guaranteeing high efficiency, covering the peak energy demand during the day, and also covering the energy needs at night. PEM fuel cell operation can benefit from its low-temperature requirement, a solid membrane electrolyte installation, which strongly reduces maintenance cost, degradation phenomena, and corrosion, and a quick start-up.
As a rising technology, SOFC systems are gaining more credit [50]. A SOFC fuel cell can operate at higher temperatures, reducing the catalyst’s strict requirements, allowing a greater carbon monoxide level to be tolerated, thus simplifying the system in terms of the needed purification system at the reformer level [51]. This fuel flexibility can surely represent a key driver to support the transition towards the hydrogen economy, also allowing greater levels of efficiency to be achieved.
It is indeed noticeable how these systems present potential solutions for cogeneration applications for buildings and districts. Currently, the units which have been installed in buildings provided for the energy needs of a small district system, composed of collective houses or apartments. In order to decrease the cost and to produce systems with lower power capacities, governments and states promoted financial programs to sustain the transition of these technologies, from research and development, towards early market adoption.
The balance of plant components, reformers, and stack were the key elements of potential failures and cost reduction.