Mitochondria are the only animal cell organelles, except for the nucleus, with their own genetic information, called mitochondrial DNA (mtDNA). The mtDNA is a double-stranded, circular, 16,569 bp DNA molecule in humans, which codes 13 essential subunits of the respiratory chain complexes, 22 tRNAs, and two rRNAs, constituting part of the mitochondrial translation machinery.

In vitro maturation (IVM) technology is one of the most promising artificial reproductive technologies, as it allows fertility specialists to obtain oocytes without any or minimal hormonal stimulation on any day of the menstrual cycle [1]. It is mostly suitable for patients with polycystic ovarian morphology, oncological patients, or women with resistant ovary syndrome. This technology has finally surpassed its experimental status [1]; however, the clinical outcomes of the standard IVM programs are still inferior to the control ovarian stimulation programs [2]. It is believed that IVM oocytes have a decreased developmental potential due to cytoplasmic immaturity [3]. As soon as a cumulus–oocyte complex is released from a follicle, meiosis resumes. Yet, at the same time, the oocyte loses gap junctions with the cumulus cells and, therefore, supplementation with nutrients and signaling molecules stops, which leaves the cytoplasm immature. This means that the oocyte’s organelles have a structure and localization typical for the germinal vesicle (GV) stage of development.
One of the main cytoplasmic organelles are mitochondria, which are the source of energy production for the cells and control intracellular Ca2+ homeostasis [4,5]. In addition to their importance in energy production and calcium homeostasis, mitochondria also play a central role in many other essential functions of cells, including the regulation of cell death and signaling pathways, iron metabolism, and biosynthesis of some organic compounds [6,7,8]. During folliculogenesis, follicles undergo major growth, expanding approximately 500 times in size. The oocyte within the follicle also undergoes major structural and biochemical transformations and has to complete two meiotic divisions. Naturally, along with this energy-demanding process, the quantity and quality of mitochondria as well as their distribution pattern in an oocyte change [9].

Mitochondria are the only animal cell organelles, except for the nucleus, with their own genetic information, called mitochondrial DNA (mtDNA). The mtDNA is a double-stranded, circular, 16,569 bp DNA molecule in humans, which codes 13 essential subunits of the respiratory chain complexes, 22 tRNAs, and two rRNAs, constituting part of the mitochondrial translation machinery [10]. The mtDNA is stored in cells in nucleoids containing one copy of the genome linked with different nuclear-encoded proteins [11]. The nucleoid seems to be a layered structure in which replication and transcription occur in the central core, whereas translation and complex assembly occur in the peripheral region [12]. The mtDNA has some unique features in comparison to nuclear DNA: (i) multicopy nature of mtDNA with a broad range from several copies in sperm cells [13] to several thousand copies in the mature oocytes [14]; (ii) the mutagenesis rate of the mitochondrial genome is 20 times higher than the mutation rate of the nuclear DNA, with some unique features in its distribution across the genome [15]; and (iii) the multicopy nature of mtDNA allows the existence of mixed populations of mtDNA molecules—a phenomenon called heteroplasmy, when there is more than one mtDNA variant in a cell or an organism [16]. The clinical consequences of mutated mtDNA manifest only once a threshold of the mutant load is exceeded and these functional threshold levels vary, depending on the type of mtDNA mutation [17]. Any mtDNA mutation is supposed to be clinically manifested at the level of 70% heteroplasmy. However, it should be noted that this level is very conditional, and the relationship between the symptoms and the heteroplasmy level is very individual [18,19]. The heteroplasmy level can fluctuate from generation to generation. Hence, women harboring heteroplasmic mtDNA mutations can transmit a wide range of heteroplasmy levels to different offspring within the same sibship. The phenomenon was first shown by Hauswirth and Laipis on a Holstein cow and her offspring when the mtDNA allele variants rapidly shifted and became fixed in a few generations [20]. This is called a “mitochondrial bottleneck”, and it occurs owing to a profound dilution of mtDNA followed potentially by a selective replication of mtDNA genomes and asymmetric segregation of mitochondria. There are two hypotheses describing its time interval: (i) bottleneck as a result of the replication of a separate group of mtDNA during postpubertal folliculogenesis; and (ii) bottleneck during embryogenesis, when there is a significant decrease in the number of mtDNA copies [21,22,23,24].

Structural and morphological studies describe mitochondria from the primordial follicle stage to mature oocytes as naive, roundish-oval-like structures. Unlike mitochondria in differentiated somatic cells, which are mature and form highly structured networks, mitochondria in oocytes have unstructured cristae with a limited capacity for energy production [25]. Measurements of the total number of discrete mitochondria and of mtDNA in mouse oocytes indicate that, on average, each mitochondrion may carry only a single mtDNA copy [26]. To the best of our knowledge, there is no information on the relationship between the mitochondria count and mtDNA copy number in the mature human oocyte, which means that the study reported by Piko and Matsumoto [20] is the only one; everyone takes for granted the extrapolation from a mouse model to human oocytes. If the hypothesis is correct, then the defect mtDNA equals the defective mitochondrion, and an oocyte permits the quality control at the single-genome level by means of selective mitophagy. On the contrary, somatic cell mitochondria are assembled in networks (mitochondrions), and at each moment in time, an individual mitochondrion contains several nucleoids. This “dilution” of pathogenic mtDNA, together with functional mitochondrial complementation, makes the process of recognizing defective mitochondria less efficient in somatic cells [27].
During oocyte maturation, mtDNA copy number dramatically increases. Most likely, there are two turning points in the mtDNA copy number timeline on the segment from the primordial follicle to the MII oocyte. The first one is during the transition from the primordial to the primary follicle stage, and the second one is during the transition from GV to MII oocytes at the antral follicle stage. Primordial germ cells contain approximately 200 copies of mtDNA, while a mature oocyte possesses about 400,000 copies [28,29] (Figure 1). As noted earlier, such a significant increase in the mtDNA copies during postpubertal folliculogenesis may be one of the bottlenecks of mtDNA inheritance. 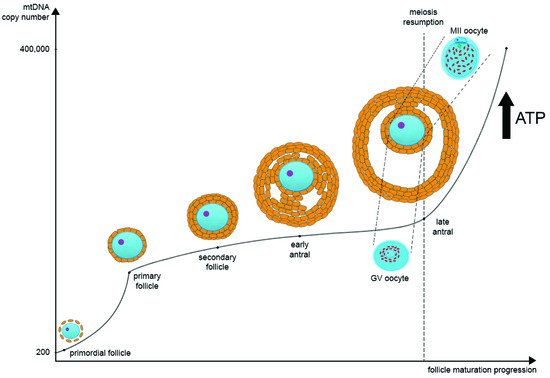 4. The Influence of Mitochondrial Function on Oocyte Quality

Female mammals at birth carry millions of primordial follicles containing oocytes arrested at the diplotene stage of prophase I, which constitute the follicular reserve of a female. As oocyte maturation requires a large amount of ATP for continuous transcription and translation, the availability of a sufficient number of functional mitochondria is crucial. However, since the mitochondria of immature oocytes are naive, it is likely that the energy to support oocyte maturation is provided mainly by the surrounding cumulus and granulosa cells [51]. Ovulating oocytes lose their connections with the cumulus cells that have provided them so far with energy and have to activate their own mitochondria. Thus, by the time of final oocyte maturation, a sufficient number of mitochondria have been accumulated. Deviation in mtDNA is associated with ovarian reserve reduction. A distinct range of oocyte mtDNA copy numbers were shown in patients with diminished ovarian reserve (100,000 ± 99,000 copies) compared to women with the normal ovarian reserve (318,000 ± 184,000 copies) [52]. The same pattern was also shown for the polar body mtDNA copy number [53]. These data indicate the importance of the number of mitochondria and mtDNA for oocyte quality.
Meiosis occurs twice during oocyte maturation, once during ovulation (meiosis I), and once during fertilization (meiosis II). Spindle microtubules are assembled from the opposite spindle poles and this process is extremely energy-intensive for oocytes in terms of ATP. There is evidence that decreases in ATP level result in meiotic errors that could alter the number of chromosomes in cells and thus lead to genetic disorders [38,47]. Such errors result in non-extrusion of the PB1, irregular distribution of chromosomes, and aneuploidy. Using HeLa and MDAMB 435 lines as a model system, it was shown that mitochondrial function is fundamental for maintaining the integrity of the genome by preventing chromosomal translocations and rearrangements [54]. Moreover, the correct spindle formation and the occurrence of chaotic mosaicism in human preimplantation embryos are in direct correlation with the value of the mitochondrial membrane potential [55]. ATP levels increase during the polar body extrusion and higher amounts of ATP correlate with a higher fertilization rate of mature oocytes [56].
Mitochondria not only regulate the energy metabolism but also the maintenance of the intracellular Ca2+ ion homeostasis [57]. The increasing Ca2+ concentration can disrupt oxidative phosphorylation and redox homeostasis or can result in the opening of the mitochondrial permeability transition pore which impairs the mitochondrial function and can cause apoptosis [58]. The low transfer of Ca2+ from the endoplasmic reticulum (ER) to the mitochondria contributes to the bioenergy crisis. In turn, disruption of mitochondrial oxidative phosphorylation (mPTP) and ATP production can affect the ATP-dependent calcium fluctuations. The entry of Ca2+ into mitochondria is stimulated by the activity of the respiratory chain complexes and causes the movement of protons into the intermembrane space, increasing the potential of the mitochondrial membrane [59].
mtDNA mutations can also result in disease and aging [60]. The study of point mutations and deletion of mtDNA in the oocytes of infertile or aged women has also been carried out. It has been shown that the number of de novo mtDNA mutations in children increases with maternal age [61,62], which might be attributed to oocyte aging. We have carefully estimated the mitochondrial mutation spectrum in offspring and mothers with a reconstruction of the de novo mitochondrial mutations that occurred in oocytes [15], and found that all the analyses of de novo mutations in mother–offspring pairs showed a trend of A > G rate increasing with oocyte’s time of dormancy. Thus, the primary oocyte arrested at the diplotene stage of prophase I can undergo accumulation of mtDNA rearrangements and accumulation of mutations during the long period of dormancy, even for several decades. Such mutations are asymmetric and likely are caused by the oxidation of mtDNA while the oocyte is waiting for fertilization [15]. It has been suggested that primary oocytes carrying deleterious mtDNA mutations are eliminated by follicular atresia, which may explain some cases of diminished ovarian reserve [63].
The purifying selection of pathogenic mtDNA during oocyte maturation is vitally important for offspring, as it can eliminate severe mtDNA mutations [64]. However, the current evidence for germline selection at the meiotic level comes from the incomplete sequencing of mtDNA in the first polar body. Interestingly, new data obtained from PB1 mtDNA deep sequencing revealed a high number of pathogenic mtDNA variants in comparison with its oocyte complement [65]. In order to further explore the transmission of defective mitochondria through generations, Sha et al. transferred the defective mitochondria in mouse germline, including the cumulus–oocyte complexes at the germinal vesicle and MII oocyte stages. The experiments confirmed that during the first and second meiosis, defective mitochondria are moved into PB1 and PB2. It was concluded that the two meiotic processes function as a kind of ultimate tier protection mechanism for future generations [65].
Thus, mitochondrial activity is a balance between the absolute mtDNA copy number, the number of mitochondria in a cell, functional capacity (mutational load), and organelle mobility.