The correct specification of glazings for façades can reduce the energy consumption in buildings. The heat exchange occurs through transparent surfaces and radiation reaches the building as light and heat. Therefore, glazings significantly contribute to the heat transfer between outdoor and indoor spaces and act directly on daylighting and thermal comfort. The selection of glazings should be a careful process of evaluation and weighing of tradeoffs. Among the characteristics required for the specification of transparent materials, the spectrophotometric behavior is an important factor to be considered, as it enables improvements in the thermal and visual comfort of a building.

People typically spend many hours in buildings bathed in the ultraviolet, visible, and infrared radiation produced by natural or electric lighting. This radiation can damage tissue regardless of whether or not it affects the visual and circadian systems [1]
The radiation transmission through glazings depends mainly on factors, such as angle of radiation incidence, thickness, chemical composition, and superficial characteristics of the glazing. The angle of radiation incidence is the angle between the direction of the radiation and the normal one (90~) to the surface under analysis [2]. The transmission of glazings also depends on the wavelength of the incident radiation. The glazing acts as an opaque material for certain regions of the spectrum, for example, it exhibits opaque behavior and prevents the crossing of radiation for wavelengths shorter than 300 nm and longer than 5000 nm [3]. The main thermal exchanges, as well as the passage of light into the interior of a building, occur on translucent or transparent surfaces. Therefore, such surfaces act directly on thermal comfort and daylighting. Regarding transparent glazing, part of the energy from the solar radiation (Figure 1a) is directly transmitted to the interior of the environment, which distinguishes opaque surfaces from translucent ones. Reflection, absorption, and transmission also occur on translucent surfaces (Figure 1b), however, the transmission takes place in a different way. The light propagates when it penetrates translucent glazing and leaves it as a diffuse light, and not as a direct one.

Figure 1. Behavior of radiation on a transparent surface (a) and on a translucent surface (b).
The behavior of transparent materials when they receive solar radiation is to react selectively, that is, the amount of energy they absorb, reflect, or transmit depends on the wavelength of the incident ray. When the angle of incidence is not normal to the plane and is increased, the reflected energy becomes more and more, while the transmitted and absorbed energy decreases, although the relationship that corresponds to the normal incidence approximately remains the same between them.
The total value of the radiation transmitted, reflected, and absorbed by glazings is an important variable for the calculation of the solar heat gain coefficient, which depends on the optical properties of the material, solar factor, incident solar radiation, overall heat transfer coefficient (U factor), and difference of temperature between the outdoor and indoor environments.
The visible spectrum is the most known solar radiation. However, two other important bands are ultraviolet (UV) and infrared (IV). Figure 2 shows the solar radiation incidence divided by spectra. Although the sun emits radiation in an extensive band of electromagnetic waves, only a narrow band of the solar spectrum is perceptible. Wavelengths longer than 1500 nm reach the terrestrial surface in small proportions. 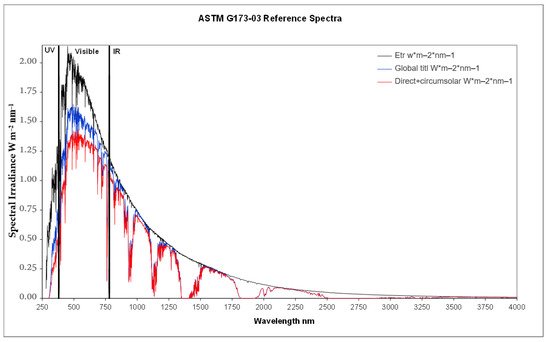 Figure 2. Solar Spectrum [4].
For the use of solar energy, the only radiation considered is the one whose wavelength ranges between 290 and 1800 nm, or, more specifically, up to 1500 nm [5], as wavelengths longer than those reach the terrestrial surface in a very reduced way and are absorbed by the water vapor and carbon dioxide present in the atmosphere. Wavelengths shorter than 290 nm are absorbed by the ozone layer [2].
The solar spectrum is divided into the ultraviolet UV region (100 to 380 nm), visible region (380 to 780), and infrared region (780 to 3000). The transmission of the glazings for each interval influences some characteristics.

The ultraviolet band is more energetic than the light (it has a shorter wavelength), therefore, it penetrates the skin more deeply and causes burns depending on the time of exposition to the solar radiation. Although only 1 to 5% of the ultraviolet radiation reaches the terrestrial surface, it must not be ignored due to the effects it exerts.
In some situations, such radiation may not be important, as in recovery areas in hospitals, as it is responsible for the synthesis of Vitamin D through the skin and exerts a bactericide effect. However, it compromises the durability of materials by the discoloration of the tissues, as it has photochemical capacity. The ultraviolet region that causes the discoloration of the materials is between 315 and 380 nm. Such radiation is also responsible for tanning.
The ultraviolet radiation is subdivided into three intervals: UV-C (between 100 and 280), UV-B (between 280 and 320), and UV-A (between 320 and 380). The UV-A radiation (between 320 and 380) causes the direct tanning of the skin with weak erythema or sun-burn. The maximum reaction of the erythema occurs 72 h after the exposition to the sun. The continuous exposition causes not only fast aging of the skin but also carcinogenic implications. The UV-B radiation causes an erythema response and, in association, indirect tanning. Under intense and frequent radiation, UV-B may produce skin carcinomas. In such a case, the maximum reaction occurs between 6–20 h after exposition. UV-C radiation does not reach the Earth, as wavelengths below 290 nm are absorbed by the ozone layer of the atmosphere. Such radiation is a germicide and highly harmful to the human skin, due to its high energy content [6].

The visible region is associated with the intensity of the white light transmitted and influences directly the degree of daylight of an environment. It is also called luminous and enables the visual sensation of days passing. It is the visible portion of the incident solar radiation in the direction normal to the surface plane.
The visible light carries enough energy to stimulate chemical reactions in the eyes and the functioning of the visual system. This wavelength follows the sequence: violet, blue, green, yellow, orange, and red, however, the human visual system is more effective in the wavelength that corresponds to green and yellow. Besides being fundamental to humans, the visual system is indispensable for the development of vegetables, because of the photosynthesis process, which requires visible light. Chlorophyll, the agent responsible for the vegetable cellular respiratory process, absorbs specific regions of the spectra.

The infrared region is invisible to the visual system, although it is noticed in the form of heat. It interferes with the indoor conditions of the environment through solar heat gain, therefore, it cannot be ignored. It is divided into three bands: short-wave infrared, or near-infrared, whose wavelengths range between 780 and 1400 nm, mid-wavelength infrared, which ranges from 1400 to 3000 nm, and, finally, long-wavelength infrared, which includes the radiation that results from heated bodies, whose wavelengths are longer than 5000 nm.
The near-infrared corresponds to the large part of the solar spectrum that crosses a colorless glass, for instance, in high proportions. References of some specifiers regarding such a region of the spectrum include statements as “glass is generally opaque to the infrared”, however, this is wrong information [3].
A spectrophotometric characterization of glazings was accomplished for the study of components for a modular façade system in Portugal. The study focused on results of spectrophotometric measurements of optical properties, specifically, the transmittance of some types of simple glazings and two types of double glazings [7][8][9].
The results enabled the verification of the glazing efficiency in terms of daylight and the correlation to thermal performance and provided subsidies and indications for the specification and adequate uses of transparent surfaces. They also complemented the datasheets of the manufactures. An evaluation of the transmission of glazings by spectrophotometric tests enables the analysis of the different regions of the spectrum (ultraviolet, visible, and infrared) individually and not as a whole, as it occurs with parameters, such as solar factor and shading coefficient, which are calculated in a global way without taking into account the differences of behavior per region of the spectrum.