Bone is a complex and dynamic tissue, and it undergoes continuous renewal via bone remodeling processes to maintain appropriate bone mass and quality [1]. These continuous processes of synthesis and destruction are fine-tuned by an equilibrium between bone-forming osteoblasts and bone-resorbing osteoclasts [2][3]. In addition to the inherent functions of osteoblasts and osteoclasts, they contribute to each other’s functions via direct and indirect communication to maintain bone homeostasis [4][5][6][7]. Moreover, osteoblasts can influence osteoclastic bone resorption by producing osteoclast regulatory factors, such as macrophage colony-stimulating factor (M-CSF), receptor activator of nuclear factor kappa-B ligand (RANKL), Fas ligand, complement component 3a, and semaphorins [5][8][9][10][11][12][13][14][15][16]. Additionally, various osteoclast-derived factors, such as those released from the matrix, secreted from the osteoclast, and expressed on the cell membrane, can also influence the osteoblast differentiation and function [16][17]. For example, matrix-derived factors, such as transforming growth factor β, BMP2, and insulin-like growth factors, which are released from osteoclastic bone resorption sites on the bone surface, stimulate the differentiation of the osteoblast progenitors. Osteoclasts also secrete products, such as BMP6, sphingosine-1-phosphate, and Wnt-10b to promote osteoblast precursor recruitment and differentiation. In addition, osteoclast membrane-bound factors, such as ephrin B2 and semaphorin D, are expected to support various interactions between the osteoclasts and mature osteoblasts promoting their osteoblastic activity [17]. The communication between osteoclasts and osteoblasts is often the cause of the side effects of the presently available antiresorptive agents and anabolic agents for the treatment of bone disease [18][19][20][21][22]. Therefore, a more detailed understanding of the cellular and molecular mechanisms of bone remodeling is necessary to identify and explore new therapeutic targets for bone disorders.
The cytoplasmic adaptor CrkL (v-crk avian sarcoma virus CT10 oncogene homolog-like) belongs to the Crk family of adaptors and is comprised of a single N-terminal Src homology 2 (SH2) domain and two consecutive SH3 domains (nSH3 and cSH3). CrkL is ubiquitously expressed in most tissues and exhibits several biological functions, such as adhesion, proliferation, migration, and survival [23][24][25][26]. This adaptor protein can function via an interaction between its own SH2 or SH3 domain and numerous adaptor proteins, including paxillin, p130Cas, p120 c-cbl, insulin receptor substrate proteins, STAT5, and PI3K [25][26][27][28][29][30][31][32][33][34][35][36][37][38][39][40]. We previously found that CrkII, another adaptor in the Crk family, plays a pivotal role in osteoclast and osteoblast differentiation [41][42]. CrkII enhances osteoclast differentiation by activating Rac1, whereas it inhibits osteoblast differentiation via JNK activation [41][42]. Furthermore, CrkII and CrkL exhibit overlapping functions in certain processes, including osteoclast and osteoblast differentiation, as they share several binding partners, due to remarkable homology between them. In contrast, several studies have reported that Crk proteins exhibit separate functions, notably during development [43][44]. We previously reported that CrkL and CrkII show redundant function during osteoclast and osteoblast differentiation, as CrkL is a distinct gene transcribed from the CrkL locus but not Crk locus. The role of CrkL in communication between osteoclasts and osteoblasts during bone remodeling processes remains unknown; therefore, in the present study, we thoroughly investigated the role of CrkL during bone remodeling by considering various aspects.

2.1. CrkL Has a Positive and Negative Effect on Osteoclast and Osteoblast Differentiation, Respectively

We previously reported that CrkL and CrkII exhibit overlapping functions in osteoclasts and osteoblasts. In the present study, to confirm the roles of CrkL in osteoclasts and osteoblasts, we determined the effects of retrovirus-mediated overexpression of CrkL in bone marrow-derived monocyte/macrophage lineage cells (BMMs) and primary osteoblasts. The formation of large multinucleated osteoclasts, induced by RANKL, was significantly enhanced in BMMs overexpressing CrkL compared to that in control (Figure 1a); however, alkaline phosphate (ALP) activity and bone mineralization induced by osteogenic media (OGM) was significantly inhibited in osteoblasts overexpressing CrkL (Figure 1b). These results confirmed that CrkL upregulates RANKL-mediated osteoclast differentiation, while it downregulates osteoblast differentiation and function. 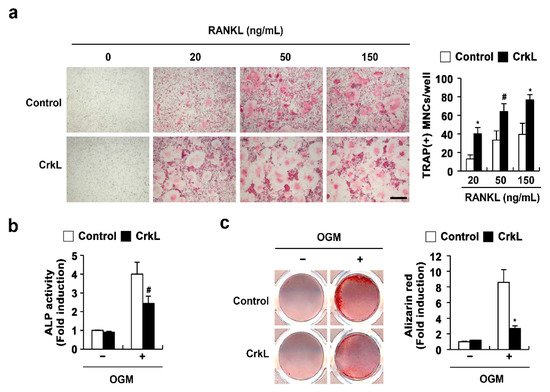 Osteoblasts produce RANKL and osteoprotegerin (OPG), that contribute to bone homeostasis via the regulation of osteoclastogenesis [15]. We further examined whether CrkL is associated with osteoblast-mediated osteoclast differentiation. Overexpression of CrkL in osteoblasts significantly inhibited the mRNA expression of Tnfsf11 in both nonstimulated and 1,25 (OH)2 vitamin D3 (Vit D3)-stimulated osteoblasts without affecting the OPG (Tnfrsf11b) expression (Figure 2a). Conversely, downregulation of CrkL by siRNA led to an increase in the mRNA levels of Tnfsf11 (Figure 2b). To functionally validate the role of CrkL in osteoblastic RANKL expression, we cocultured the osteoblasts with osteoclast precursor cells. The coculture of osteoblasts overexpressing or downregulating CrkL with osteoclast precursor cells displayed decreased or increased osteoclast formation, in contrast to each control osteoblast culture (Figure 2c,d). 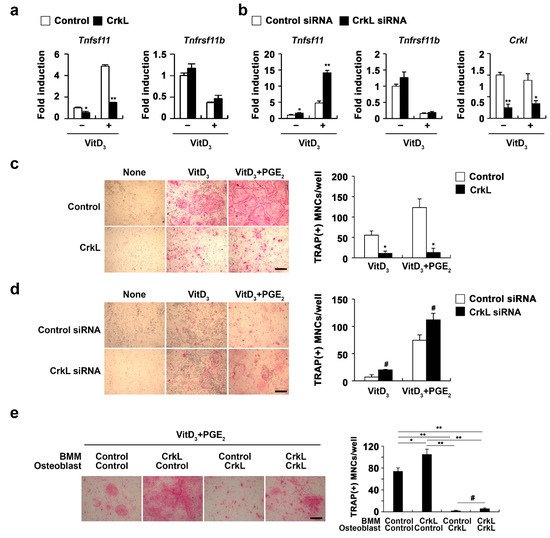 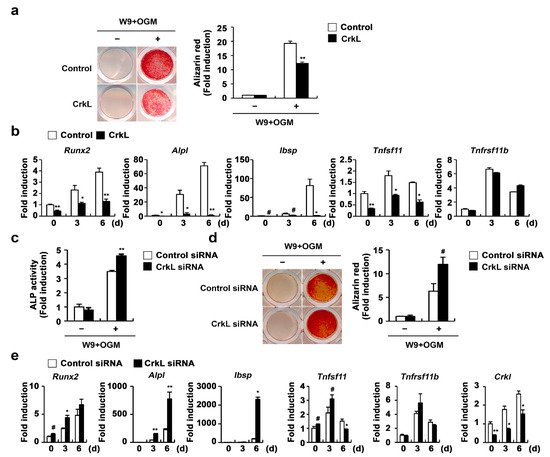 As Runx2 has been implicated in RANKL expression in various cell types, such as prostate cancer cells, vascular smooth muscle cells, and osteoblasts [49][50][51][52], we further examined whether CrkL-inhibited Tnfsf11 expression is involved in the regulation of Runx2 expression. As illustrated in Figure 4a, Runx2 expression controlled by CrkL was similar to that of Tnfsf11. Moreover, the expression of Tnfsf11 as well as that of Runx2 was suppressed when CrkL was overexpressed, whereas it was increased when CrkL was downregulated. Moreover, inhibition of Tnfsf11 expression by CrkL was rescued by the forced expression of Runx2 (Figure 4b). In order to gain a deeper insight into the mechanisms underlying the inhibition of Tnfsf11 expression by CrkL, we examined whether CrkL directly interacts with Runx2. Coimmunoprecipitation revealed the direct interaction between CrkL and Runx2 in HEK-293T cells (Figure 4c). Furthermore, Runx2 induced the expression of 6XOSE (Runx2 DNA-binding elements), Ibsp, and Tnfsf11 promoter reporter, and its effects were significantly inhibited by CrkL (Figure 4d). Collectively, these results indicated that the CrkL-induced decreased expression of RANKL is mediated via the suppression of Runx2 transcriptional activity. 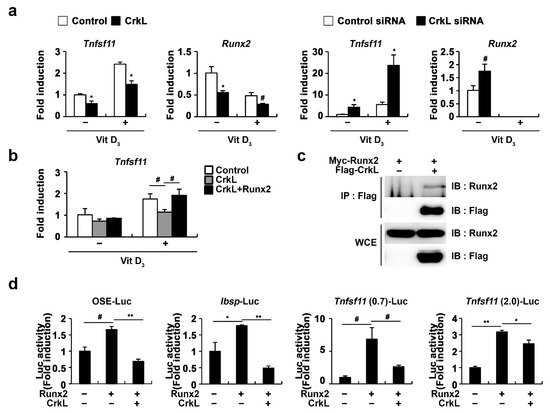 2.5. Downregulation of CrkL Can Protect RANKL-Induced Bone Loss In Vivo

Eventually, we assessed the local administration of siRNA, targeting CrkL, in a mouse calvaria model. In microcomputed tomography (µCT) analyses, the injection of RANKL to the calvaria led to a significant decrease in bone mass. RANKL-induced bone loss was attenuated by the local administration of CrkL siRNA (Figure 5). These results indicated that CrkL may be a potential target in the development of new therapeutics for bone diseases.

Figure 5. CrkL knockdown prevents RANKL-induced bone loss. Bone volume to tissue volume (BV/TV) and the number of TRAP-positive cells in the murine calvarial model treated with PBS, RANKL and control, or CrkL siRNA. # p < 0.05; * p < 0.01 as compared with the controls.