Glioblastoma is the most common and aggressive primary malignant brain tumor, and more than two-thirds of patients with glioblastoma die within two years of diagnosis. The challenges of treating this disease mainly include genetic and microenvironmental features that often render the tumor resistant to treatments. Despite extensive research efforts, only a small number of drugs tested in clinical trials have become therapies for patients. Targeting cyclin-dependent kinase 9 (CDK9) is an emerging therapeutic approach that has the potential to overcome the challenges in glioblastoma management.

CDKs are serine-threonine kinases that form heterodimers with specific types of cyclins and are generally categorized into two groups: those that regulate cell cycle progression (such as CDK1, CDK2, CDK4, and CDK6) and those that regulate transcription by RNA Polymerase II (RNA Pol II) (mainly CDK7, CDK8, and CDK9) [13]. Activation of CDKs and cyclins are tightly controlled in normal cells to maintain homeostasis [4]. Dysregulation of CDKs and cyclins results in abnormal cell proliferation and cancer progression [4]. Specifically, the idea that transcriptional programs are highly dysregulated in cancers and that cancers become over-dependent on certain factors that control gene expression has led to increased efforts to inhibit transcriptional CDKs, such as CDK9 [21].

CDK9 is broadly expressed in all types of human tissues and is present in two isoforms in mammalian cells: CDK9-49 and CDK9-55, which differ only by their molecular weight, but functionally are both able to associate with cyclins T1, T2A, T2B, or K (with CDK9 binding primarily to cyclin T1) [32]. The CDK9-cyclin T1 complex forms the positive transcription elongation factor b (P-TEFb), which plays a crucial role in regulating transcription elongation (Figure 1) [33]. Shortly after the initiation of transcription, RNA Pol II pauses at the promoter-proximal region, located 30–60 nucleotides downstream of the transcription start site [34]. This pausing of RNA Pol II serves as a quality control step to allow for 5′-capping and other modifications and is facilitated by promoter-associated transcription factors, negative elongation factor (NELF), and DRB-sensitivity-inducing factor (DSIF). For elongation to continue and for mature mRNA to be generated, the paused RNA Pol II must be released from the promoter-proximal site, and P-TEFb serves as a main regulator of this step. In order for P-TEFb to be fully activated, CDK9 is first phosphorylated by CDK7 at Threonine 186 [35], and subsequently, P-TEFb phosphorylates Serine 2 of RNA Pol II’s carboxyl-terminal domain (CTD), NELF, DSIF, and the CTD-linker of RNA Pol II in order to release RNA Pol II [36,37]. 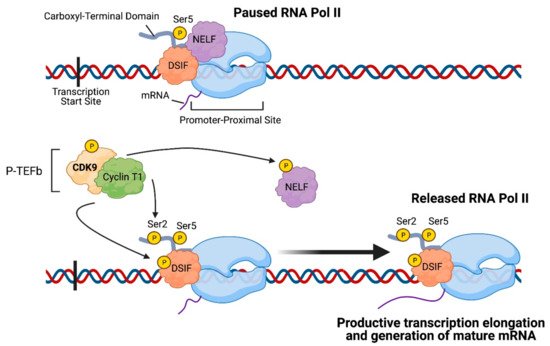 Figure 1. Role of CDK9 in transcription elongation: Positive transcription elongation factor b (P-TEFb), which is composed of cyclin-dependent kinase 9 (CDK9) and Cyclin T1, phosphorylates Serine 2 on the carboxyl-terminal domain of RNA Polymerase II (RNA Pol II) as well as negative elongation factor (NELF) and DRB-sensitivity-inducing factor (DSIF). Consequently, RNA Polymerase II is released from the promoter-proximal site and engages in productive transcription elongation and generation of mature mRNA. The image was created with BioRender.com (accessed on 18 April 2021).
P-TEFb can exist in two other states in the cell—either reversibly bound in an inhibitory complex consisting of HEXIM1/2 and the small nuclear ribonucleoprotein (snRNP) 7SK or assembled with other transcription factors in an active super elongation complex (SEC) that interacts with RNA Pol II’s CTD [34]. The mechanism by which P-TEFb is released from the inhibitory complex and recruited to the promoter-proximal site is mediated by Jumonji Domain Containing 6 (JMJD6) and Bromodomain-containing protein 4 (BRD4), with JMJD6 binding directly with CDK9 and BRD4 with Cyclin T1 [36]. Notably, an shRNA loss-of-function screen demonstrated that glioblastoma cells in an orthotopic xenograft mouse model, but not in vitro, were dependent on JMJD6 and BRD4 for survival [38]. Furthermore, expression of JMJD6 was shown to increase with glioma grade and inhibiting JMJD6 extended survival of the glioma-bearing mice [38]. Additionally, a study demonstrated that two multi-CDK inhibitors, flavopiridol, and SNS-032, reduced levels of phosphorylated RNA Pol II in glioblastoma cells and disrupted anchorage-independent growth and cancer cell migration, two hallmarks of cancer cells [39,40]. These results reveal that glioblastomas are dependent on RNA Pol II pause-release and CDK9-containing complexes for their survival and present a rationale for further exploration of targeting CDK9 and its interacting factors as a therapeutic approach. 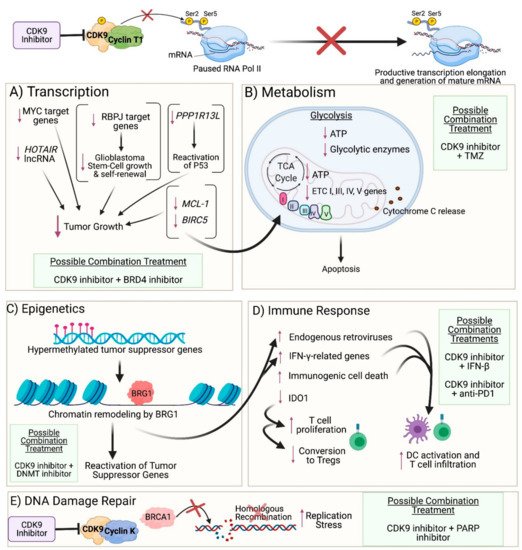 Targeting CDK9 has also been shown to induce metabolic stress in glioblastomas (Figure 2B). As previously discussed, zotiraciclib decreased transcription of the anti-apoptotic proteins MCL-1 and Survivin in glioblastoma cells, resulting in apoptosis [35]. Importantly, MCL-1 and Survivin also play vital roles in maintaining the function and integrity of the mitochondria. Zotiraciclib was shown to induce mitochondrial dysfunction in glioblastoma cells, as observed by the downregulation in expression of most genes involved in respiratory complexes I, III, IV, and V [35]. Moreover, zotiraciclib altered mitochondrial membrane potential and disrupted mitochondrial membrane integrity, as observed by the presence of dysmorphic mitochondria under electron microscopy and the release of cytochrome c into the cytoplasm by both Raman imaging and western blot [35]. Notably, zotiraciclib-induced mitochondrial damage was potentiated when TMZ treatment was included as well [35]. Zotiraciclib was also shown to suppress glycolysis, resulting in depleted intracellular ATP levels, and combination treatment of zotiraciclib and TMZ demonstrated a synergistic effect through further glycolytic suppression, as observed by the downregulation of the glycolytic enzymes Hexokinase 2 (HK2), Pyruvate Kinase isoform M2 (PKM2), and Lactate Dehydrogenase A (LDHA), which are usually highly expressed in glioblastomas [35,54,55,56]. Since HK2 and PKM2 promote tumor growth and GSC self-renewal [54,55] and glioblastomas are heavily reliant on glycolysis for energy production [57], targeting CDK9 provides a novel mechanism to exploit these metabolic vulnerabilities. Furthermore, since targeting CDK9 resulted in mitochondrial damage, glioblastoma cells are limited in their ability to compensate for energy production via oxidative phosphorylation. Inhibition of both energy production pathways thus increases the likelihood of cancer cell death.

Although CDK9 is often associated with transcription elongation, it also plays an important role in pathways that maintain genomic integrity [33]. Furthermore, Cyclin K, but not Cyclin T, is involved with CDK9 in these DNA damage repair processes: CDK9-Cyclin K interacts with DNA damage repair proteins such as ataxia telangiectasia and Rad3-related protein and accumulates on chromatin to limit the generation of single-stranded DNA resulting from DNA damage [33]. The CDK9-55 isoform, but not CDK9-42, has also been shown to associate with Ku70, a protein involved in double-strand DNA break (DSB) repair, and shRNA depletion of CDK9-55 in HeLa cells resulted in apoptosis and DSBs [58].
Given the importance of CDK9 and Cyclin K in DNA damage repair, studies in cancer models have focused on inhibiting CDK9 to generate increased replication stress and facilitate cancer cell death. In one study, osteosarcoma cells pre-treated with either the CDK9 inhibitor flavopiridol or 5,6-dichloro-1-β-D-ribofuranosylbenzimidazole demonstrated impaired cell cycle recovery following treatment with hydroxyurea [59]. Another study conducted in head and neck squamous cell carcinoma (HNSCC) cell lines examined the relationship between CDK9, DNA damage, and sensitivity to radiation [60]. siRNA knockdown of CDK9 resulted in significant induction of γH2AX (indicating DSBs), delayed cell cycle transition, and increased sensitivity to radiation. In contrast, overexpression of CDK9 enhanced the survival of HNSCC cells that were treated with radiation [60].
Glioblastomas demonstrate high levels of DNA replication, which predisposes them to significant replication stress [61]. BRCA1 is usually considered a tumor suppressor, but in glioblastomas, BRCA1 helps to mitigate replication stress and extend cancer cell survival [61]. High expression of BRCA1 has been shown to correlate with lower overall survival in glioblastoma patients [61], underscoring the need to investigate treatments that can dysregulate BRCA1 signaling. Importantly, CDK9 has been shown to modulate the recruitment of BRCA1 to DSBs and plays an important role in the BRCA1-mediated homologous recombination (HR) DNA repair process (Figure 2E) [62]. Cell survival assays performed in wild-type BRCA1 mammary gland carcinoma cells, for example, demonstrated that knockdown of CDK9 impaired recruitment of BRCA1 to DSBs and sensitized cells to radiation [62].
Tumors with mutations in BRCA1 are deficient in HR and are often vulnerable to treatment with inhibitors of Poly(ADP-ribose) polymerase (PARP), another enzyme involved in DNA repair processes [63]. Research has focused on expanding the benefit of PARP inhibitors to wild-type BRCA1 cancer cells by combining PARP inhibitors with other treatment options in order to achieve a synthetic lethal effect [63]. In one study, wild-type BRCA1 mammary gland carcinoma cells were treated with an shRNA targeting CDK9 and were found to be more sensitive to the combined treatment of radiation and Olaparib, a PARP inhibitor, than cells with intact CDK9 [62]. Another study in wild-type BRCA1 ovarian cancer cells demonstrated that the combined treatment of Olaparib and the CDK9 inhibitor CDKI-73 suppressed colony formation and induced apoptosis, and additionally reduced tumor growth in a xenograft mouse model [64]. Importantly, CDKI-73 was shown to downregulate BRCA1 expression, which contributed to increased sensitivity to Olaparib [64]. These studies present important implications for the treatment of glioblastomas: The majority of glioblastomas are reported to carry wild-type BRCA1 and are proficient in homologous recombination, and consequently, PARP inhibitors have shown limited efficacy [65]. Since BRCA1 is dependent on CDK9 for HR repair, CDK9 inhibition may provide a synthetic lethal mechanism to render glioblastomas more vulnerable to PARP inhibitors.

Tumor suppressor genes (TSGs) in cancers are silenced via epigenetic modifications. Specifically, methylation in TSG promoters recruits repressor complexes that ultimately lead to the formation of heterochromatin [28]. Zhang et al. demonstrated that CDK9 maintains gene silencing in cancer cells by phosphorylating BRG1, a component of the SWI/SNF chromatin remodeling complex, preventing BRG1 from being recruited to the heterochromatin to move and restructure nucleosomes and mediate gene transcription [28]. Importantly, CDK9 inhibition was shown to dephosphorylate BRG1, enabling BRG1 to access and remodel the chromatin, leading to the reactivation of TSGs (Figure 2C) [28]. The authors also examined the anti-tumor effects of CDK9 inhibition in an ovarian cancer mouse model treated with SNS-032 and observed reactivation of ovarian-cancer specific hypermethylated TSGs, decreased tumor burden, and prolonged survival [28].
Glioblastomas exhibit frequent hypermethylation of TSGs, such as RB1, EMP3, RASSF1A, and BLU [66]. Moreover, one study reported that significant hypermethylation of the pro-apoptotic CASP8 occurred during the progression from primary to recurrent glioblastoma, which possibly conferred a growth advantage to tumor cells remaining after radiation/chemotherapy treatment [67]. Targeting CDK9 may thus provide a mechanism to reactivate TSGs in glioblastomas and to counteract hypermethylation of factors that could render the tumor resistant to future treatments. Interestingly, Zhang et al. also demonstrated that the transcriptional profile induced by CDK9 inhibition was similar to the transcriptional profile induced by treatment with a DNA methyltransferase inhibitor (DNMTi), which demethylated the promoters of silenced TSGs, allowing for reactivation of these genes [28]. Combining CDK9 inhibition with DNMT inhibition may thus attain synergistic induction of TSGs and inhibition of tumor growth.