Dermatophytes are filamentous fungi with the ability to digest keratinized substrates, i.e., skin, hair, and nails. They are considered the major etiological agents of cutaneous superficial mycoses, often called ringworm [1][2][3][4][5]. These diseases are highly transmissible and clinically varied from mild to severe, depending on the host’s immune status, strain virulence, and other environmental factors [1][6]. The overall prevalence of ringworm in cattle is higher in countries with hotter climates and where the number of animals in the cowshed is high and the contact is closer [3][7][8][9]. Dermatophytosis is commonly considered to be a self-limiting disease, with a course of duration usually varying from 4 to 12 weeks [10]. Appropriate treatment or vaccination may shorten the period with clinical signs [11] and significantly reduce the risk of spread of infection [5].
In most countries, bovine ringworm is considered a relatively harmless disease, with little impact on production parameters and animal welfare [3][11][12]. Control measures are rarely implemented by veterinary authorities or livestock industry [10]. Nonetheless, the use of vaccine became almost routine in 1970–1980 in Hungary [13], Germany [14], Yugoslavia [15], Bulgaria [16], and Norway [17], where approximately 250 million cattle were vaccinated and the results were promising, with a drop in the percentage of infected herds from almost 100% to less than 10% in 1975 and 1% in 1984 [18]. In each of these cases, the vaccination was related to T. verrucosum dermatophytosis, although the acquired immunity was extended to trichophytoses with a different etiology [11]. Repeated administration of inactivated or attenuated preparations with a preferable 10 to 14 days interval is recommended to obtain the highest vaccine efficacy [5][11][19][20]. Interestingly, experience from natural outbreaks of ringworm in cattle has proven that the immunity is long-lasting [5][19] and that re-vaccination is not necessary [21].
An interesting issue related to ringworm in cattle is the control of the occurrence of dermatophytes in herds, and also in a carrier state. This issue is especially important in cowsheds where vaccinated and unvaccinated animals are kept. The application of conventional methods of detection and identification of dermatophytes in cattle herds has several drawbacks, as they are laborious and time-consuming and necessitate the experience of a mycological diagnostician [22][23][24]. Technologically advanced methods of dermatophyte identification developed recently include molecular methods based on PCR [25][26]. Moreover, real-time PCR techniques are increasingly frequently used in the diagnosis of human dermatomycoses, due to their high specificity and sensitivity in the detection of dermatophytes directly from clinical samples, and even if cultures assessed with conventional methods are negative [22][25][27]. These qPCR methods have so far only occasionally been used in veterinary mycology. Is it possible to use them for control studies of the presence of dermatophytes in cattle herds?
In this context, the aim of this study was to test the occurrence of dermatophytes in cattle herds using qPCR techniques and compare with the results of conventional methods.

The pan-dermatophyte primers in the qPCR technique (P) facilitated detection of the presence of the genetic material of dermatophytes in the sample in 100% of the cases of symptomatic animals (Table 1). Moreover, this method, when used to analyze material from the asymptomatic carrier animals, revealed that 45% of the samples contained the dermatophyte genetic material. In turn, the direct light microscopy analysis of the material (M) sampled from the clinical lesions in the cattle revealed the presence of arthrospores in all samples. In the diagnostics of the material from the asymptomatic animals, elements of the fungus were shown by the direct analysis in 34.17%. In turn, dermatophyte cultures (C) were obtained from 100% and 22.5% of the samples from the ringworm cases and asymptomatic carriage, respectively. This method allowed an identification based on the macro- and micro-morphology of the cultures (Figure 1), followed by confirmation of the results by ITS region sequencing and alignment based on the BLAST algorithm (Basic Local Alignment Search Tool), with sequences deposited in the GenBank database. The analysis of the consistency of the results obtained for the asymptomatic animals revealed that the direct examination by qPCR (P) and the microscopic evaluation (M) showed 75.93% identical results. In 50% and 22.5% of the positive results of qPCR (P) and microscopic examinations (M), respectively, culture (C) was obtained. Additionally, in 25.93% of the samples, positive results were obtained for all three methods tested. 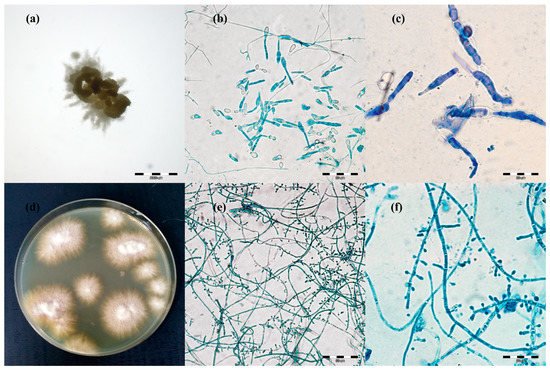 Figure 1. Micro- and macromorphology of two species of dermatophytes isolated from one outbreak of lesions from cattle. Legend: after three passages, two separate pure dermatophyte cultures were obtained: (a–c), Trichophyton verrucosum; (a), macromorphology after 21 days of incubation on Sabouraud medium at magnification 4×; (b), micromorphology after staining with lactophenol blue at magnification 400×; (c), at magnification 1000×; (d–f), Trichophyton benhamiae; (d), micromorphology (obverse); (e), micromorphology after staining with lactophenol blue at magnification 400×; (f), at magnification 1000× (pictures taken with light microscopy Olympus BX51).
Table 1. Diagnostic effectiveness of tested methods in relation to clinical material taken from symptomatic and asymptomatic dermatophyte infections.
ST: significantly highest effectiveness of method (assessed by ANOVA followed by HSD Tukey test using the Statistica (Windows v13.1); StatSoft, Warsaw, Poland).
The macro- and micro-morphological image of the 21-day culture demonstrated colonies with a friable texture and a yellow or yellow-orange reverse. The size of the colonies was in the range from 3 to 7 mm. The edges of the colonies were strongly corrugated like a cauliflower surface, and the images of the obverse and the reverse were reminiscent of a star or a turbine rotor (Figure 1a). The micromorphological image on the microscope slides (Figure 21b,c) exhibited sparse, thin, and strongly elongated macroconidia. No chains of circular chlamydospores were observed. Trichophyton verrucosum was identified on the basis of morphology.
Different results were obtained for 17 samples. After 7 days of incubation of the material, the macro- and micro-morphological picture was unclear and exhibited not only macroconidia resembling the so-called rat tails, but also numerous small clavate microconidia. Such a morphological picture was not typical of T. verrucosum [3][28][29]. After the next 14 days (21st day of culture), the morphological appearance of these samples changed significantly. The size of the colonies was in the range from 8 to 12 mm. On the edge of the colony structure, there was a dense velvety light beige surface, which became suede-like, cauliflower-convex, and brown closer to the center. The micromorphological picture revealed chains of circular chlamydospores, small oval to clavate microconidia laterally inserted at the hyphae, and cigarette-shaped septated macroconidia. The morphological image appeared to be characteristic of more than one species of dermatophytes. Separate cultures were made by grafting a fragment of the mycelia from the margins and from the center of the colonies. After three passages, two separate pure dermatophyte cultures were obtained. One of them was characteristic of T. verrucosum, whereas the morphological identification of the other one revealed T. benhamiae (Figure 2d–f).
The taxonomic position of all isolates was verified based on a comparative analysis of the ITS sequences of the isolated and reference strains in the GenBank database. The ITS sequences, which were obtained for T. verrucosum isolates, in the BLAST exhibited 99% similarity to the T. verrucosum CBS365.53, and sequences of 17 isolates morphologically identified as T. benhamiae revealed 98–99% similarity to the ITS sequence of T. benhamiae CBS 809.72. 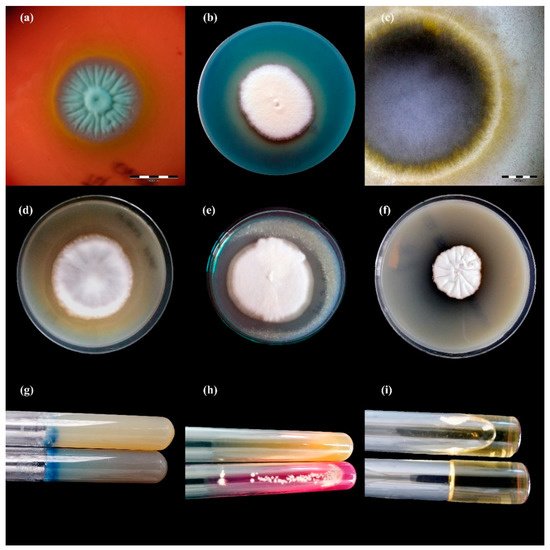 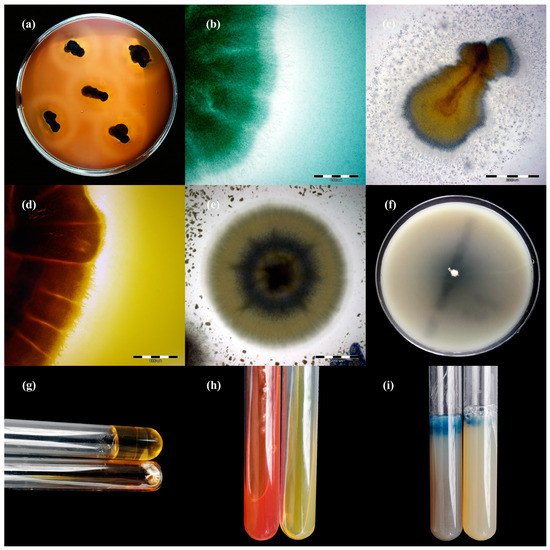