Multiple sclerosis (MS) is a demyelinating, autoimmune, and neurodegenerative disease of the central nervous system (CNS) that results in a variety of physical and cognitive deficits. The etiology of MS is largely unknown; however, it is believed that an environmental factor combined with genetic predisposition triggers an autoimmune response to CNS antigens.The majority of MS patients initially present with a relapsing-remitting disease course, where relapses of clinical symptoms are followed by a period of remission in which symptoms partially or completely recover. The clinical manifestations of relapses are considered to be a result of acute inflammation and demyelination [1]. Over time, a significant proportion of relapsing-remitting MS patients will develop a progressive form of the disease (secondary-progressive MS) involving continuous worsening of neurological symptoms. A small percentage of patients present initially with primary-progressive MS where disease continuously progresses without remission. Ongoing neurodegeneration is characteristic of progressive disease and is believed to be responsible for the permanent, irreversible damage in MS patients [2-4]. The clinical significance of neurodegeneration is important because it has a stronger correlation with clinical disability than demyelination [5-8].

Most of the treatments for MS are immunotherapies that act to regulate an overactive immune system. These drugs have been proven to be effective in offering a better quality of life for the majority of patients, specifically those with relapsing-remitting MS [9,10]. The reason why these therapies might not significantly attenuate progressive disease is because they fail to disrupt the neurodegenerative process [11]. The cause of neurodegeneration in MS is predominately unknown, but is likely complex and multifactorial. Many mechanisms have been proposed and researched in depth, such as the increased energy requirements, sodium and calcium channel redistribution, and cellular stress that results from the demyelination of axons [12-14] as well as mitochondrial dysfunction, oxidative stress, and neuroinflammation. Recent data suggests that dysfunctional RNA-binding proteins (RBPs) may contribute to the pathogenesis of neurodegeneration in MS and its models, which is the focus of this review,

RBPs are highly conserved proteins whose expression is tightly regulated and necessary for cell survival. They play important roles in the regulation of gene expression as well as mRNA stability, splicing, and transport. Under homeostatic conditions, many RBPs localize to the nucleus where they continuously shuttle back and forth to the cytoplasm; a process mediated by nuclear export and nuclear localization signals within the RBP. RBPs contain functional regions that have the ability to bind RNA as well as other proteins creating higher order structures. Under homeostatic circumstances, RNAs and RBPs can be concentrate into membraneless structures such as stress granules (SGs), which generally contain a denser core and a more dynamic shell that interacts with the surrounding cytoplasm [15]. Cytoplasmic SGs are dynamic, membraneless granules that harbor translationally repressed mRNAs and proteins, including RBPs, as a mechanism of protection. SG formation alters patterns of local RNA translation facilitating the stress response [16]. Under physiological conditions, once the acute stressor is removed, SGs disassemble and translation resumes. In contrast, under pathologic conditions, SGs may persist and have been shown to lead to decreased cell survival and the induction of proapoptotic pathways [17–20]. Abnormally stable SGs may serve as a platform for formation of larger protein aggregates, and further interactions between RNA and RBPs within SGs may change their dynamics, leading to a lack of disassembly [21]. The prolonged sequestration of important RBPs and mRNAs needed for cell survival combined with translational impairment might also be a mechanism of cell death [22]. SGs have been tightly linked to neurodegeneration in human neurologic diseases as well as their models [23-25]. 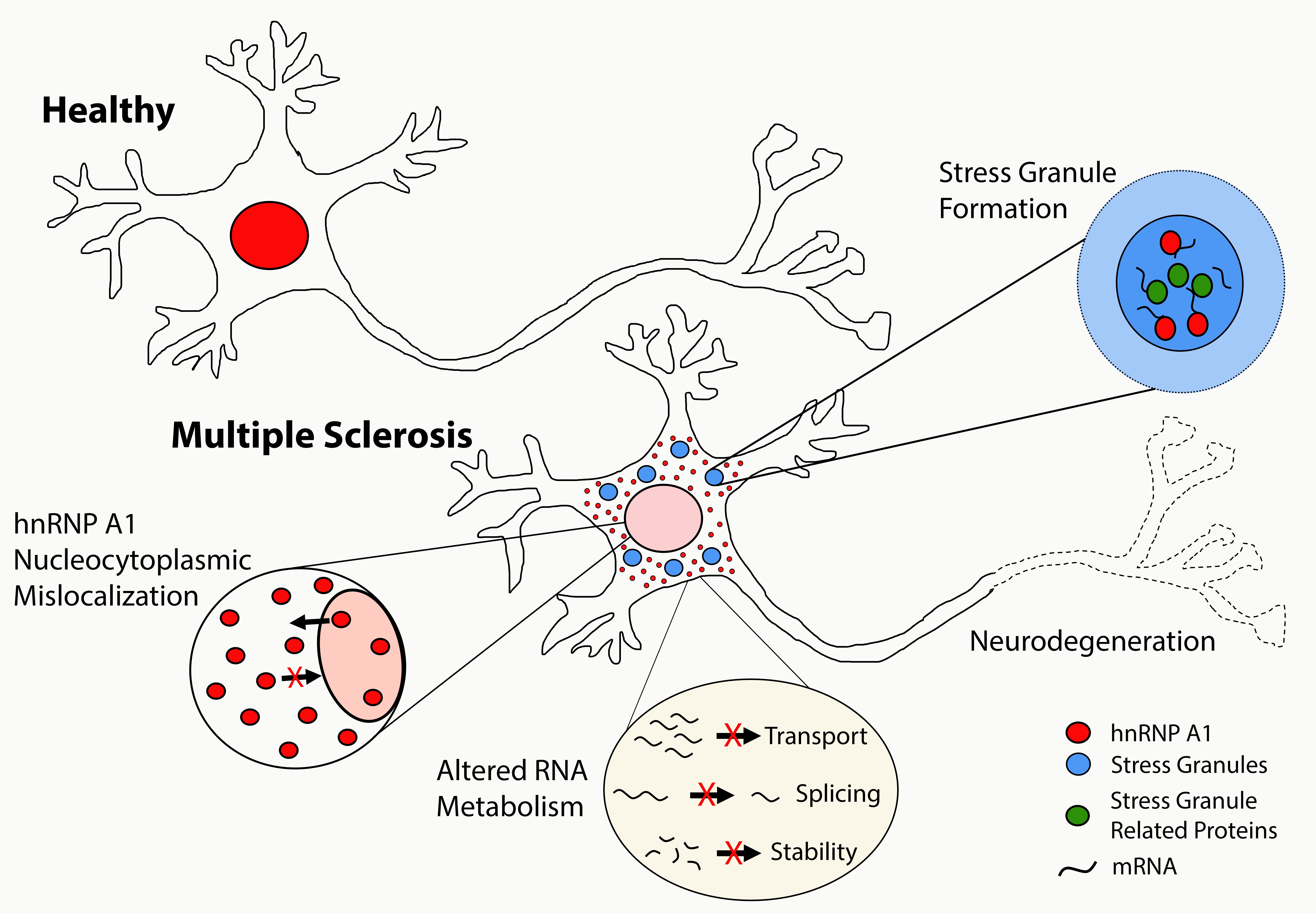 Figure: Dysfunctional RBPs result in a triad of molecular changes, including mislocalization of RBPs from its homeostatic nuclear location to the cytoplasm, co-localization in cytoplasmic stress granules and altered RNA metabolism.

Several factors have been found to disrupt RBP function, including mutations within RBPs, osmotic stress, oxidative stress, heat stress, and proinflammatory cytokines [25-27]. For example, in vitro experiments demonstrated that somatic mutations within the RBP heterogeneous nuclear ribonucleoprotein A1 (hnRNP A1) identified from MS patients contribute to RBP dysfunction [28]. These experiments showed that transfection of plasmids containing hnRNP A1 mutants in neuron-like cells resulted in hnRNP A1 mislocalization, colocalization into cytoplasmic SGs, and apoptosis, compared to cells transfected with plasmids containing wild type hnRNP A1. Considering inherited mutations within RBPs and subsequent RBP dysfunction were shown to underlie ALS and FTLD pathology [24,29-33], these experiments suggest similar mechanisms may contribute to the pathogenesis of MS.

There is substantial evidence demonstrating RBP dysfunction in neurons in MS and its models suggesting this may be an underlying mechanism of neurodegeneration. For example, hnRNP A1 mislocalization and SG formation, two of the pathological hallmarks of dysfunctional RBPs, were initially shown in neurons from a single MS case [26]. Recently, these findings were expanded to include 12 additional MS cases and six control cases, and demonstrated increased nucleocytoplasmic mislocalization of hnRNP A1 and the RBP Tar DNA Binding Protein 43 (TDP-43) in neurons from MS patients compared to controls [34]. Increased nucleocytoplasmic localization of RBPs has been shown to be toxic to neurons [35,36]. In a separate study, altered RBP biology was identified in oligodendrocytes and neurons of MS cases. These data found altered expression of the RBPs TDP-43 and polypyrimidine tract-binding protein 1 and 2 (PTB1 / PTB2) in cortical demyelinated lesions [37]. Considering the importance of TDP-43 and PTB1/2 in oligodendrocyte viability and neuronal differentiation, respectively, researchers hypothesized RBP dysfunction might contribute to cortical lesion damage and neurodegeneration in MS [37].

In addition to cytokine-induced mechanisms of RBP dysfunction, our lab has implicated an antibody response to hnRNP A1 as a mechanism of neurodegeneration in MS [23,38-43]. MS patients develop IgG specific for hnRNP A1, specifically to the M9 region of hnRNP A1, that is responsible for its transport into and out of the nucleus [44]. Previously published data demonstrated that peripheral injections of anti-hnRNP A1 antibodies which overlap with the immunodominant epitope of MS IgG, into mice with EAE resulted in worsening of disease, increased neurodegeneration, and a change in phenotype from flaccid to spastic hind limbs [45]. Spasticity of limbs is a common symptom of MS [46,47]. Immunohistochemical localization of anti-hnRNP A1 antibodies injected into mice with EAE showed antibody deposition within and surrounding spinal cord neurons. Additionally, we found that peripheral injection of anti-hnRNP A1 antibodies also exacerbated hnRNP A1 dysfunction [23,45]. Anti-hnRNP A1 antibodies were localized to areas of the spinal cord with increased neuronal hnRNP A1 nucleocytoplasmic mislocalization, SG formation, and neuronal loss compared to controls. This study demonstrated that, in addition to the neuroinflammatory response, antibodies to hnRNP A1, an intraneuronal target, augments RBP dysfunction and neurodegeneration in an animal model of MS.

Research suggests that dysfunctional RBPs are a pathologic hallmark of MS and its models and may contribute to neurodegeneration in mechanisms similar to other neurologic diseases. Further research involving dysfunctional RBPs is necessary to better understand the cellular pathways effected, so that precise therapeutic interventions can be created to prevent, attenuate, or reverse RBP dysfunction and in turn, alter the natural history of neurodegeneration and disease progression in MS.